We entered New Delhi, the nation's capital and our second last stop, rather tentatively. India is a country with a big reputation, both good and bad, and so far we were lucky enough to have experienced a lot more of the former than the latter. But this was due to be our biggest test yet. We had expected Bangalore to be manic - it wasn't. We thought Mumbai would be absolute mayhem - not at all. Surely, New Delhi would live up to our expectations of  'crazy India'...?

Well, on the whole - no! It was actually quite alright. It's never a place I'd like to live, and there's a few spots that I'd never like to see again, but overall it was relatively pleasant. 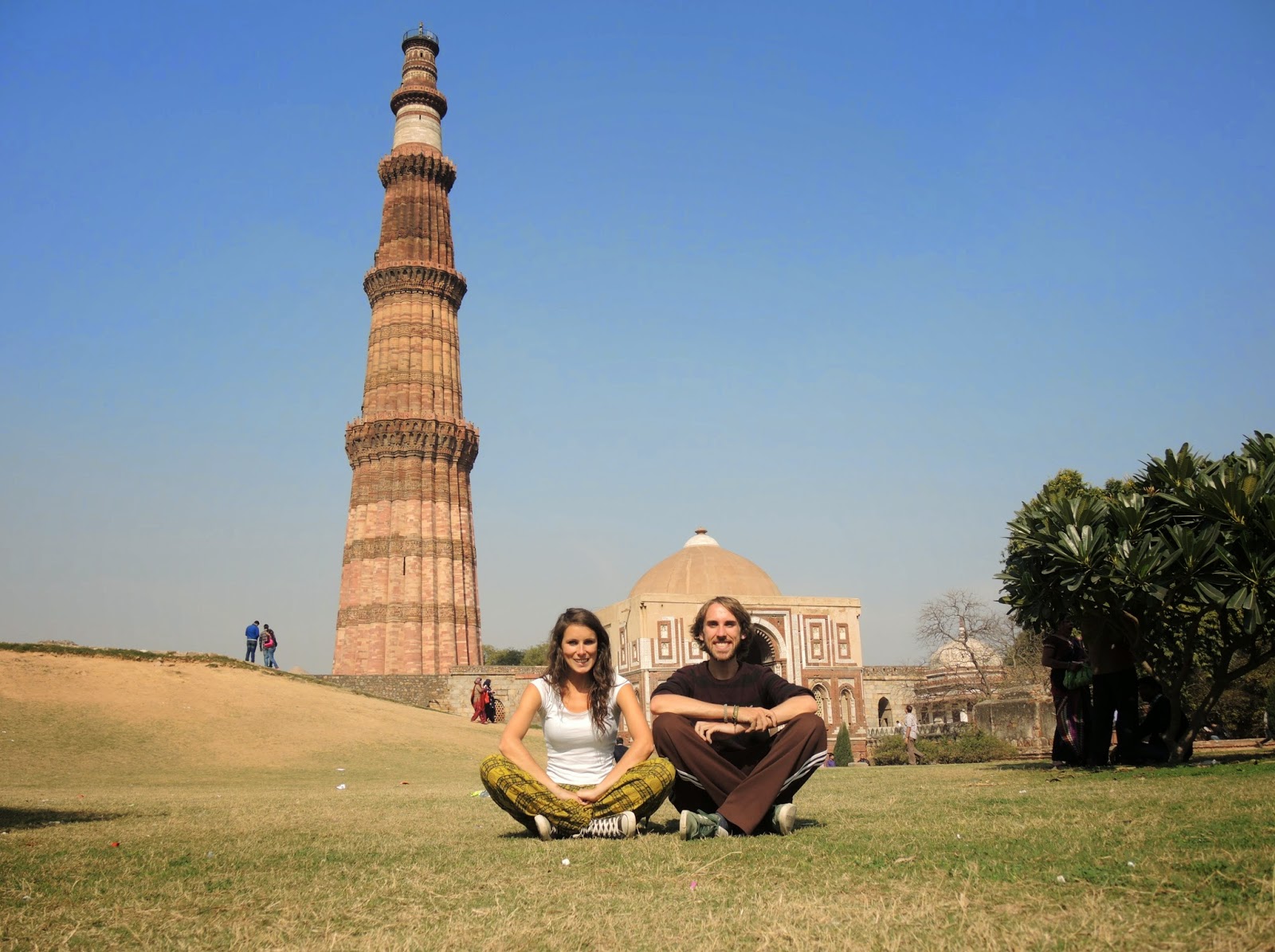 A couple of factors helped in that respect -  the fact that they have a pretty good metro system here, so we didn't have to deal with insane traffic or shifty rickshaw drivers was a major plus. We also found ourselves an amazing restaurant on our first night in town (Metropolis), so just ate dinner there every day. No "Delhi Belly" for us!

I know some people when they travel, never eat in the same place twice, just to experience different options, but we’re the complete opposite - if we find a good thing, we hold on to it! We've had enough bad meals on the road to appreciate a good place when we find it, and this one was delicious! I guess it's handy that we love Indian food as it’s obviously a lot easier to find good local restaurants here than Western ones. And besides, eating regional cuisine is part and parcel of travelling. It just makes life a whole easier when the food is actually really great!

But there's a lot more to New Delhi than just good food and avoiding people! On our first day in town, we were quite busy; visiting the Islamic tower of Qutab Minar, the Lodi Gardens and then over to Humayun's Tomb. 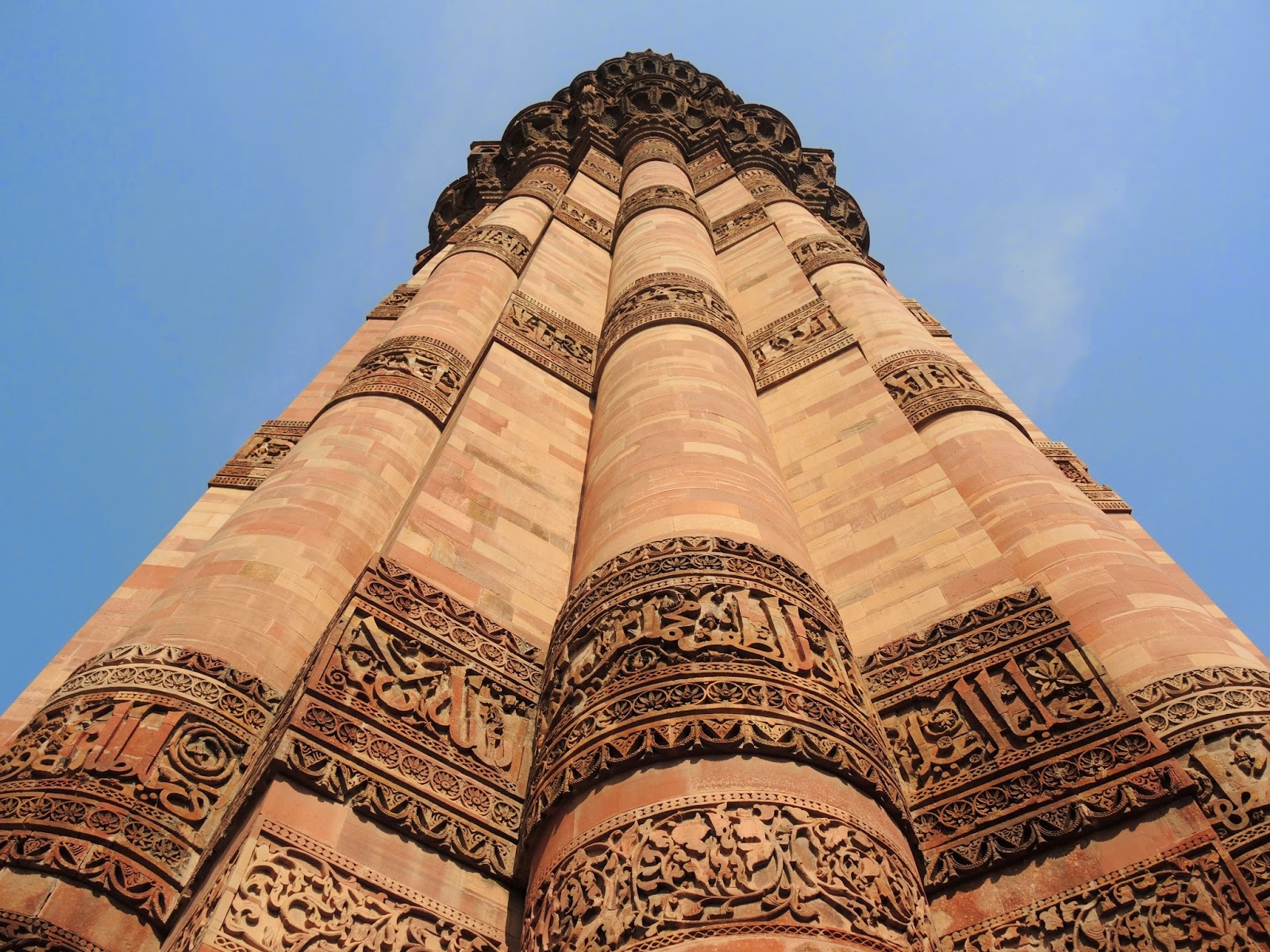 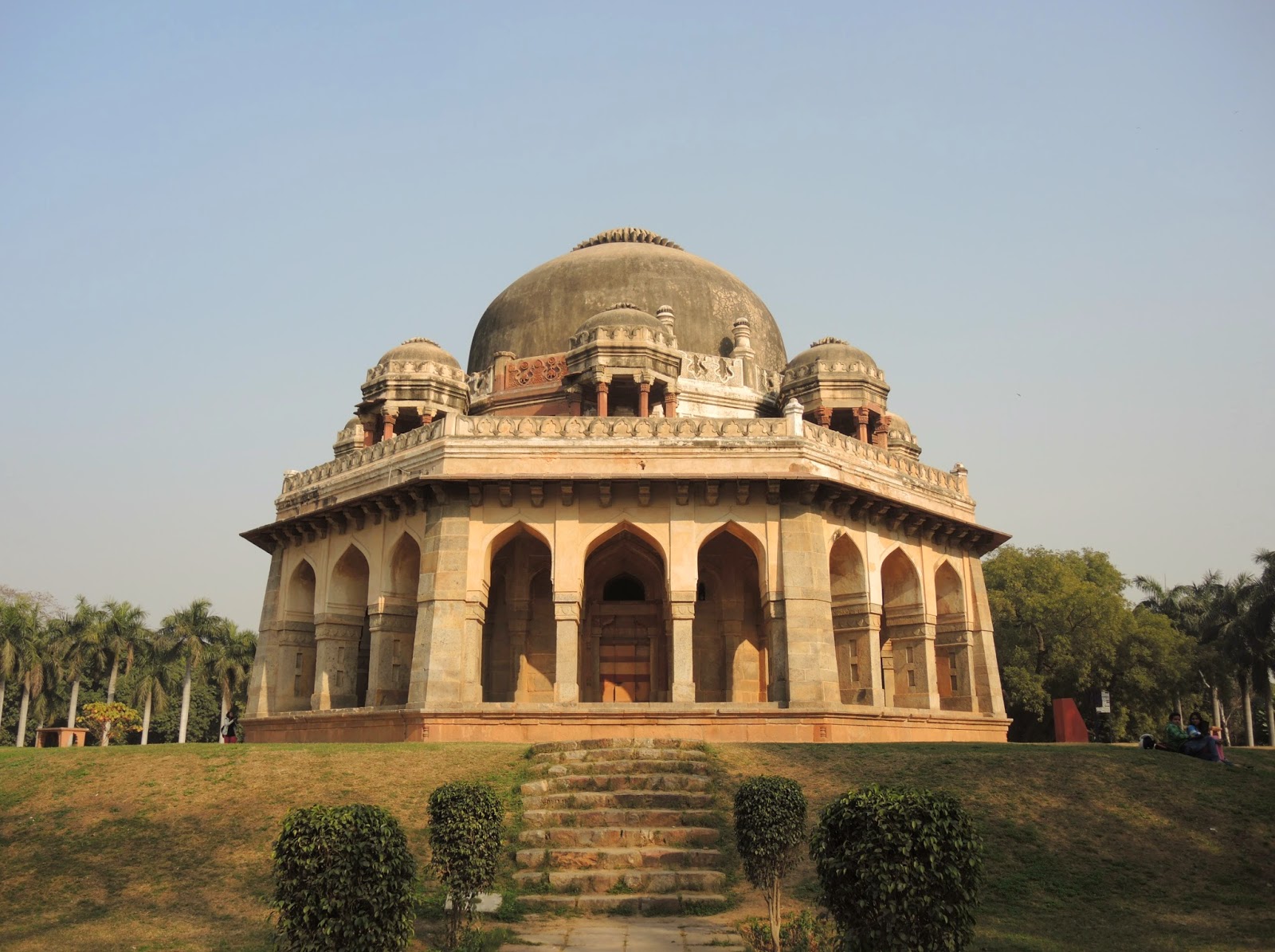 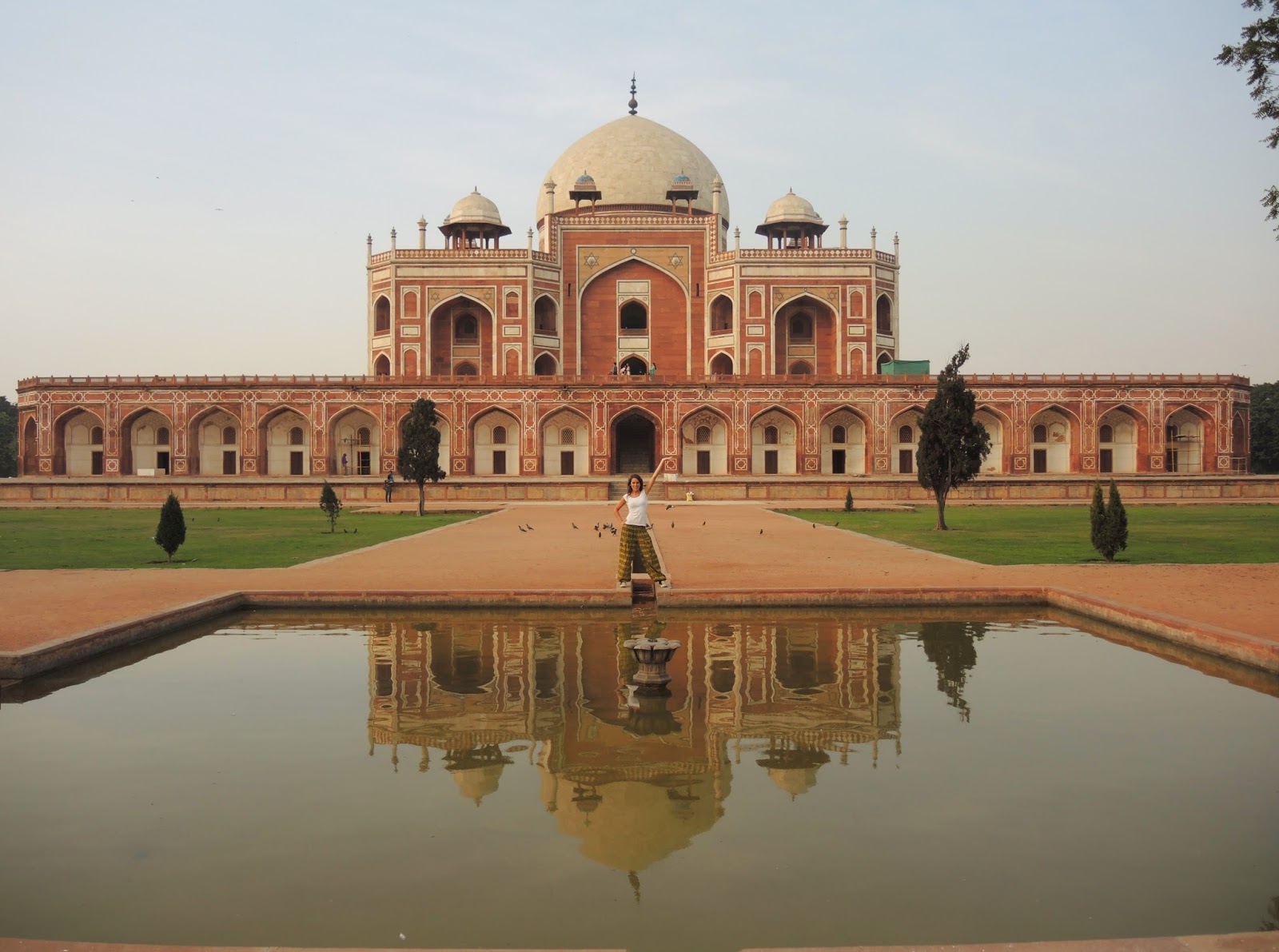 Humayun's Tomb was probably the best of the three, but they were all worth a visit. It was like a big, brown Taj Mahal, just less crowded, and not shrouded in fog!

The next day, we went to our second Gandhi museum of the trip (you'd think one would be enough, and it definitely was. There's only so much you can learn about someone!) This place was a bit better than the first one in Mumbai though, especially as it was in the place where he was killed. They even had marked out the footprints of his final walk up to the very place he was shot. 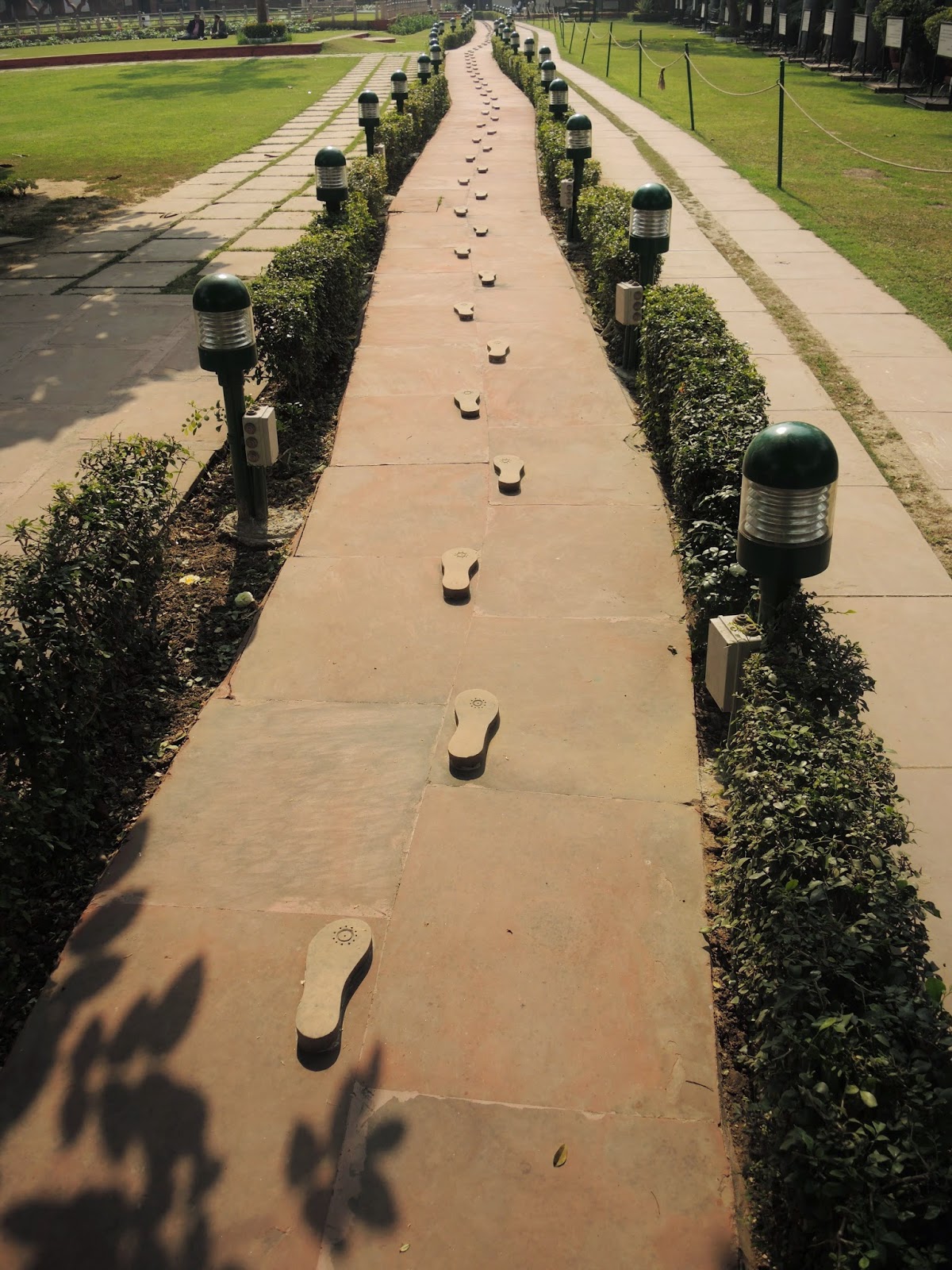 Next we headed to the Red Fort where we had planned to see a couple of things in the area, but after our journey there, we quickly reassessed our schedule.

As I mentioned earlier, New Delhi had been a lot less chaotic than we were expecting, but here we were plunged into the mayhem we had anticipated - an ocean of people, toing and froing, coming and going, calling and clawing at you to get your attention and/or money. It felt like being in the middle of a zombie apocalypse, only less safe! So once we arrived at the Fort, we decided to just bail out as fast as we could. I guess it was good to see that part of life here, but the smallest of doses was fine with us.

Red Fort itself was nothing that special anyway. We didn't even go inside as we had heard that it was quite run down and shabby, and from the outside, it was nothing that we hadn't seen before. 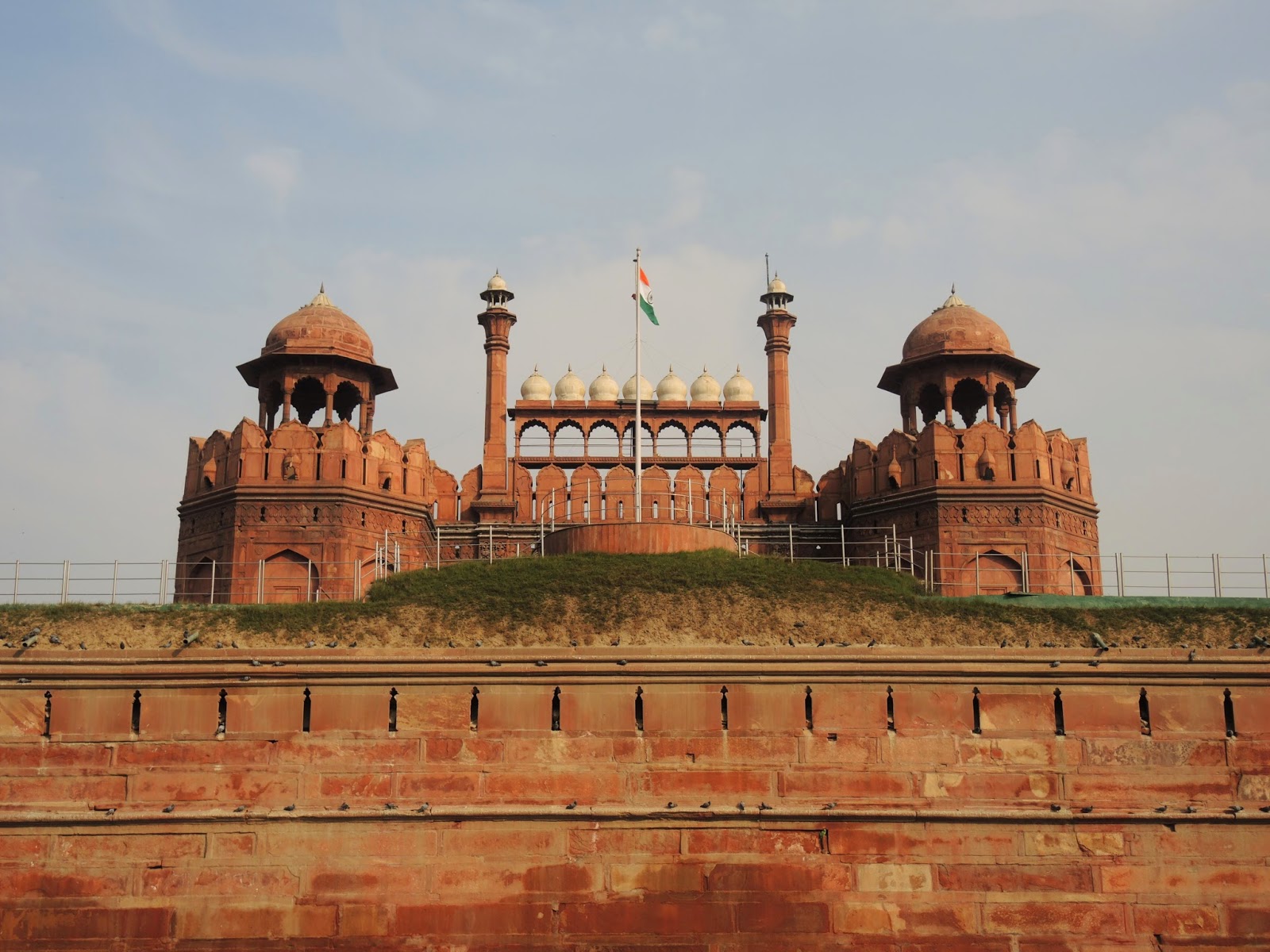 We moved on from there to a much nicer and quieter part of the city to visit Gurudwara Bangla Sahib, our first ever Sikh Temple. We had been to religious sites before where we had to wear sarongs, or cover up our knees and shoulders, but here we had to pop on a couple of bandannas and go for more of a pirate look. 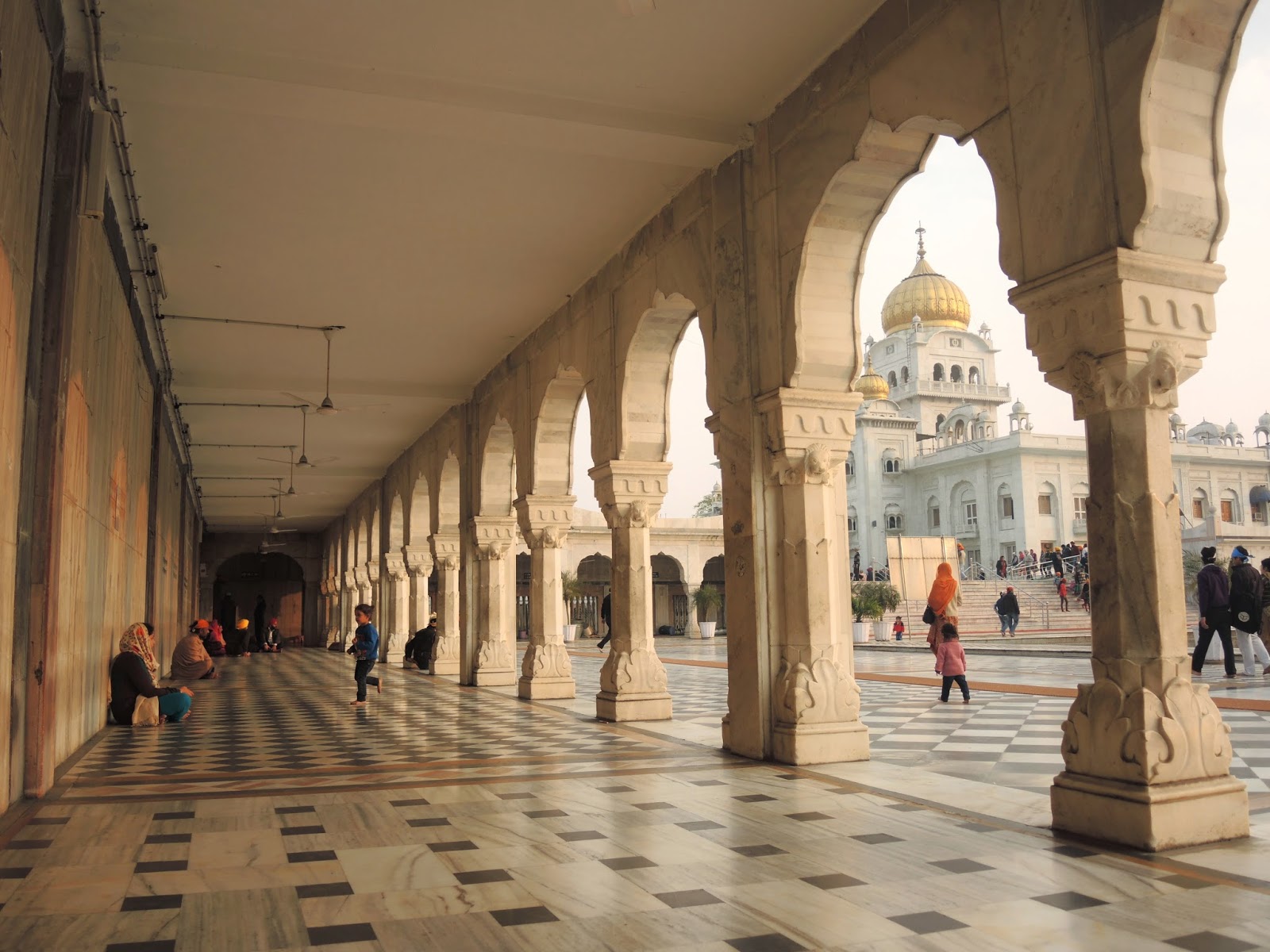 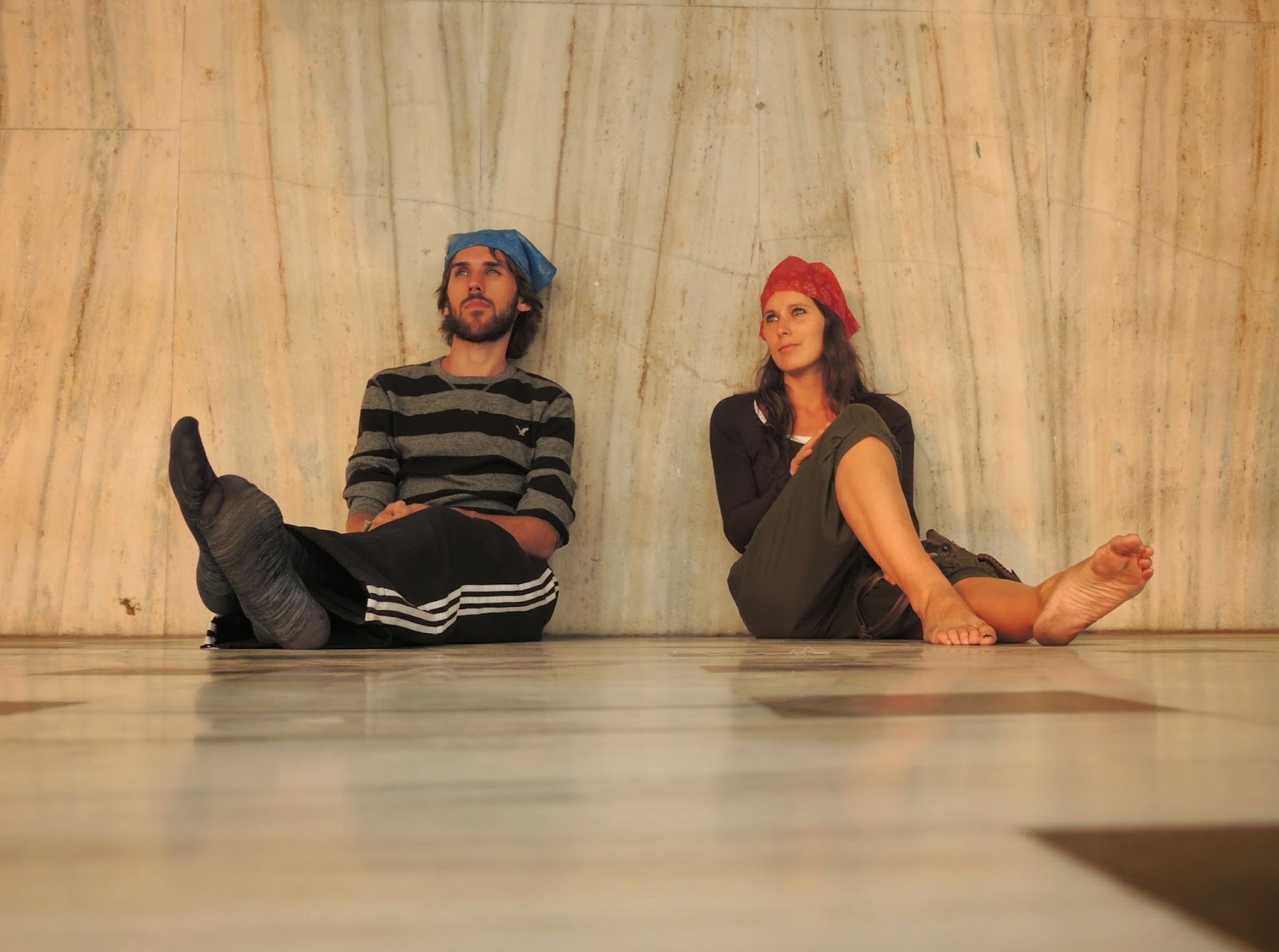 And I have to say, we do look pretty Sikh!

And that was almost that for New Delhi, we just had to catch our ride out of town. Indian trains had been great to us, and that night we were due to board our last ever one, all the way to Varanasi. For the occasion, we even splashed out and went first class, best to go out in style! But as we reached the station, we found that the train had been delayed by a whole 6 hours! Ultimate dose! Luckily, we were staying just 5 minutes from the station, so we were able to limp back to the hotel, and ask for a room until our new departure time of 2am. We made it through the passing hours and more importantly, made it safely back to the station (up until now, we had avoided walking the streets at night), and in the end it was worth the wait, as we had our own little cabin to ourselves, where we made our latest video diary:

There are usually four beds in a cabin, but there was a small little half-cabin at the end with only two beds that we were fortunate enough to be assigned to (probably because we were the only whities on board). So, with a private cabin to ourselves on a late night train, we did what any young couple would...

...used the bed sheets to dress up as Gandhi! 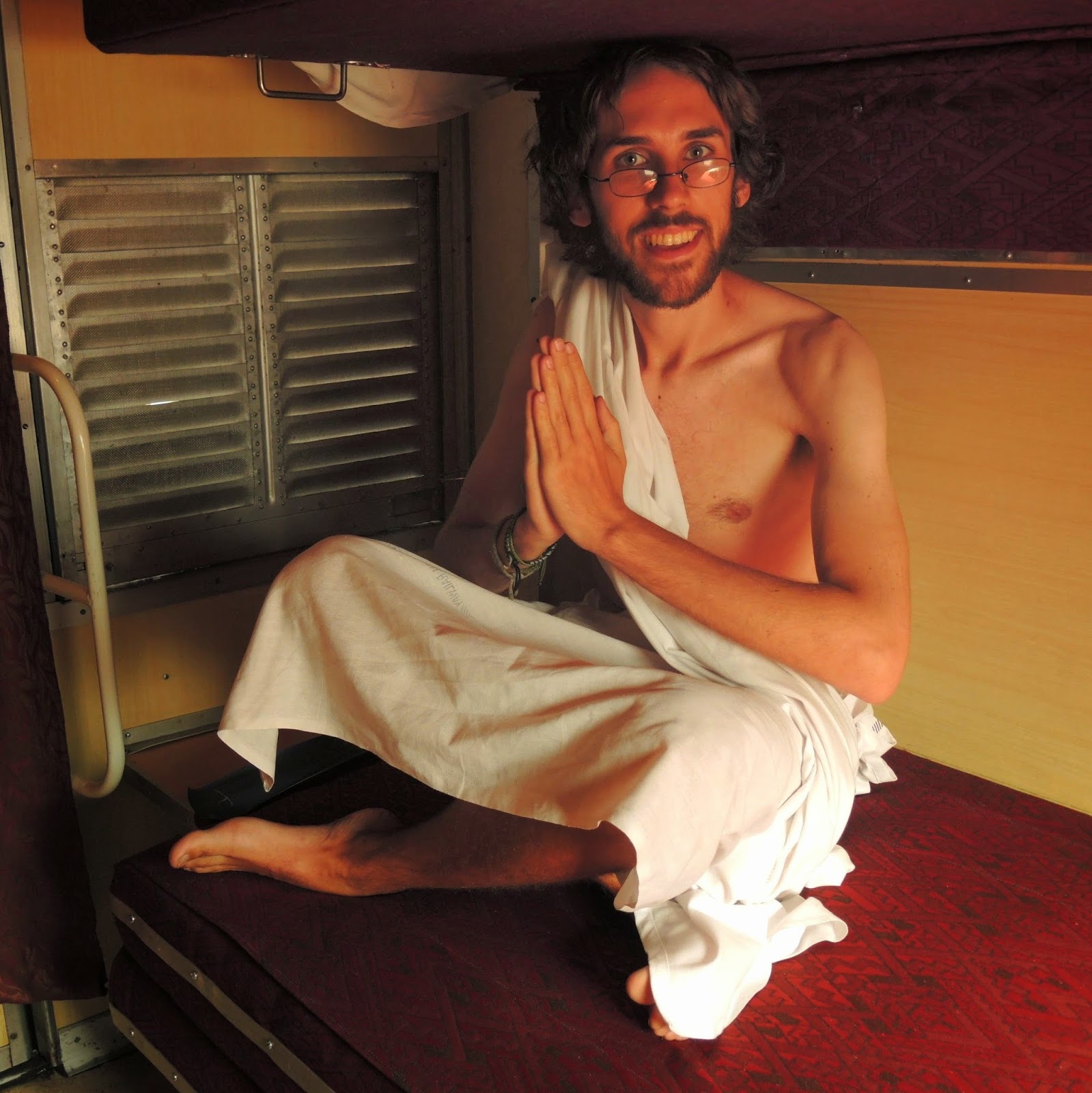 And not just Gandhi himself, we also have his two Irish cousins: 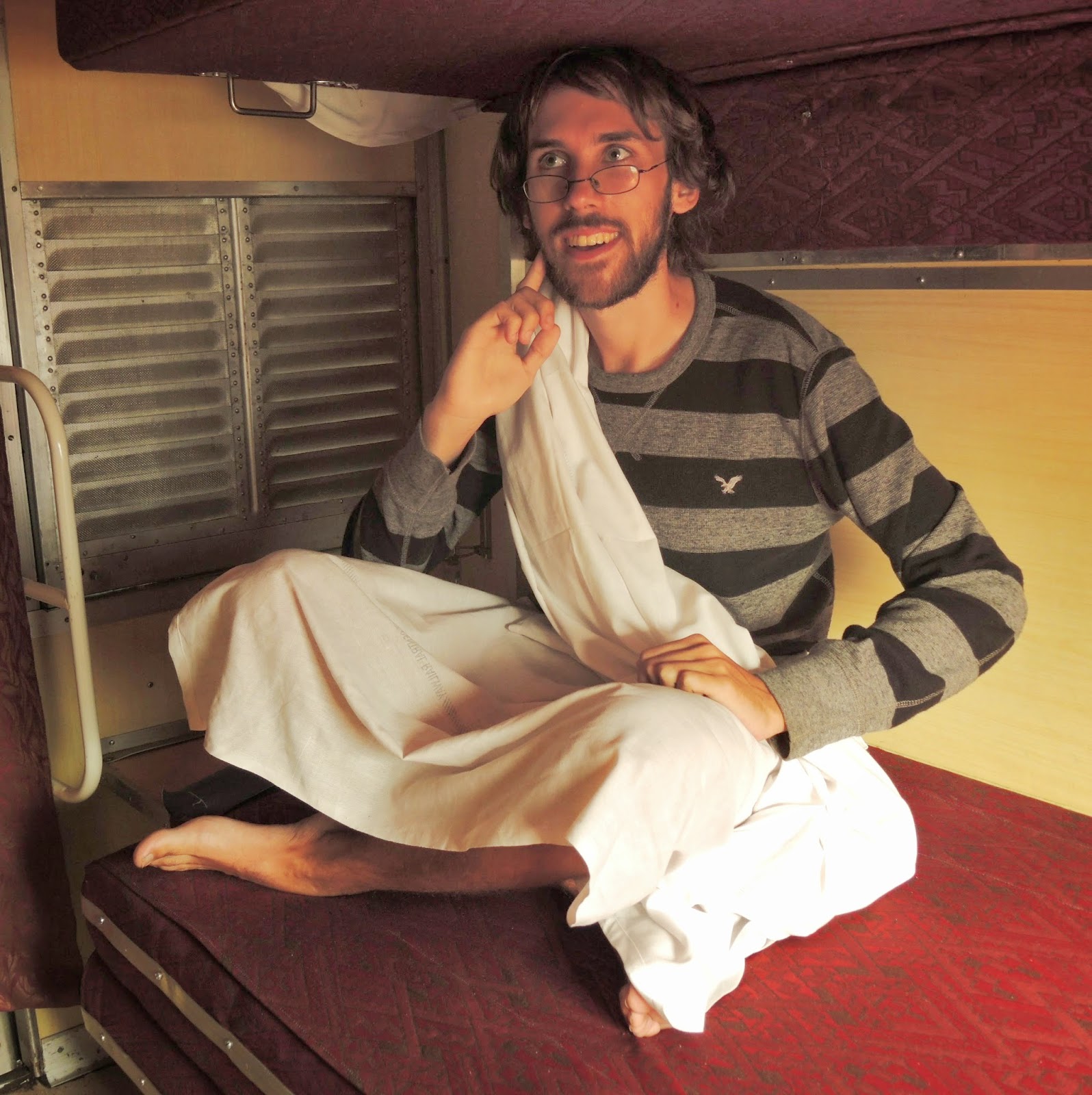 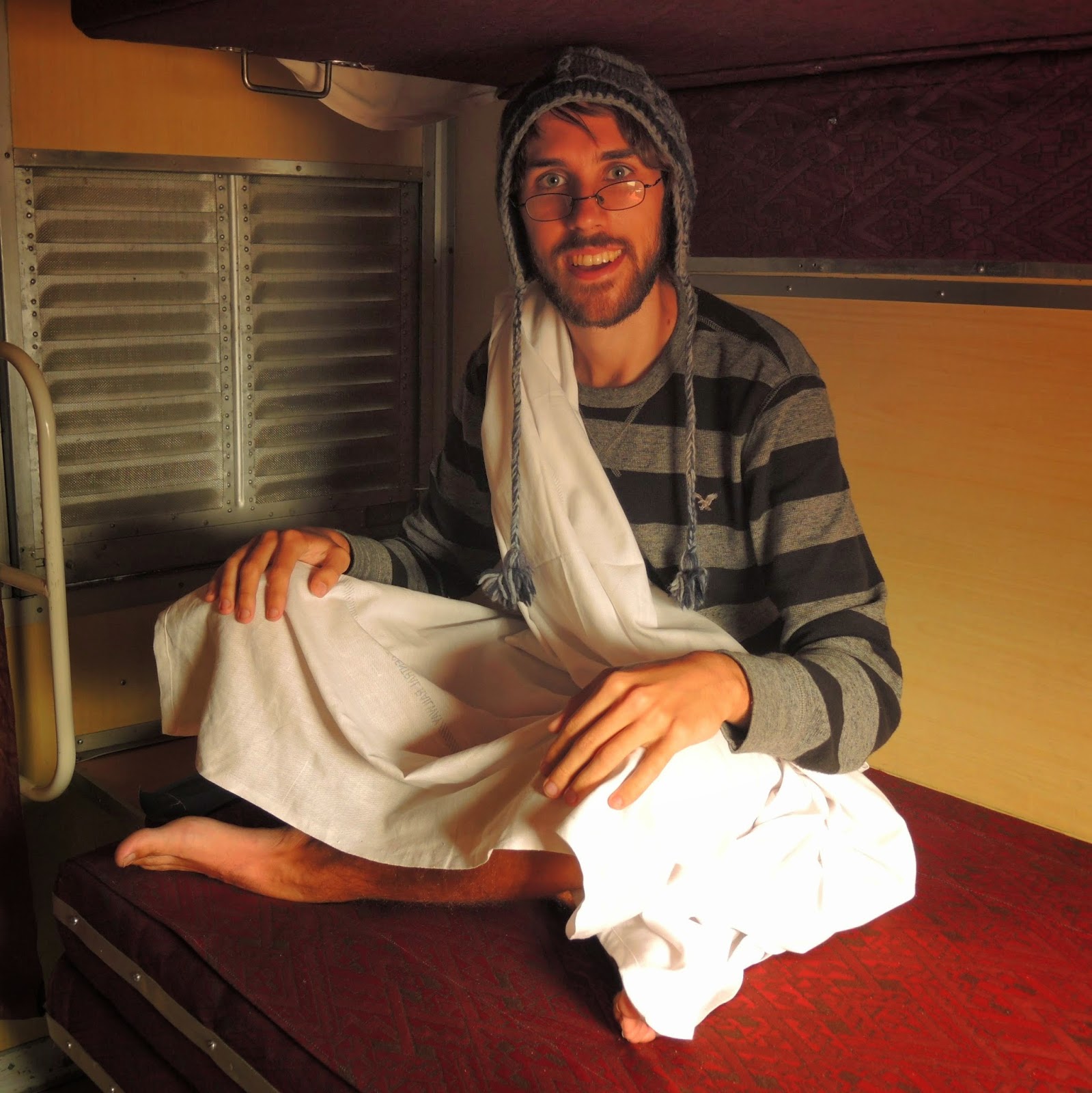 
Certainly a journey well spent! Next stop, and last stop - Varanasi!
Posted by Mark O'Leary at 4:51 AM