Next up, as we continued our journey north (and a little to the west), we came to India's Golden City, Jaisalmer. The place, in fact, had more of a Moroccan or Arabian vibe rather than an Indian one. It felt like we had been transported to a different country entirely, which isn't the first time I've said that in the last few weeks. India is just full of surprises! We had been in the Gobi Desert last summer, so had been in somewhat similar surroundings before, but because the population in Mongolia is so sparse, this was our first time really being in a proper desert city. 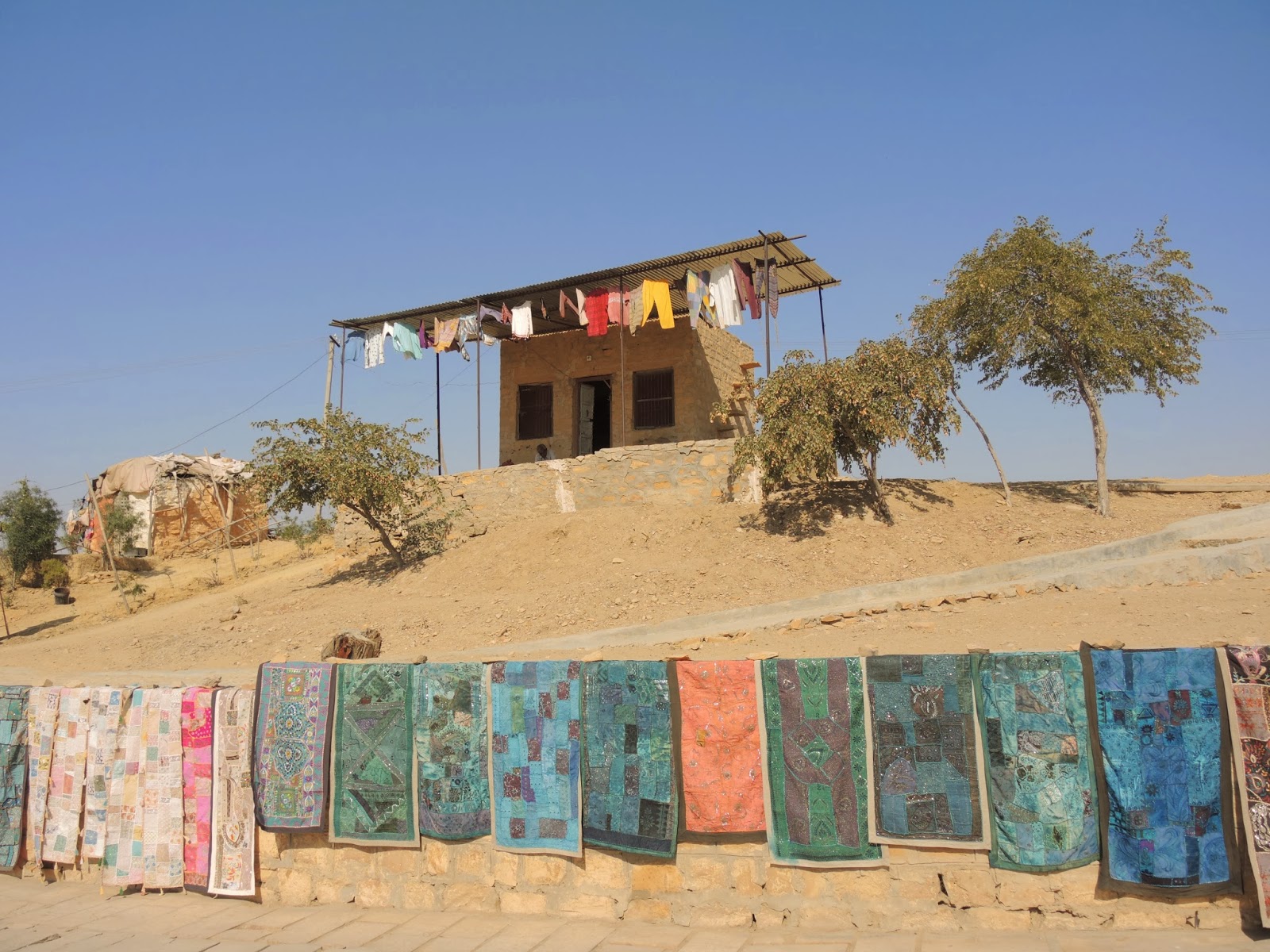 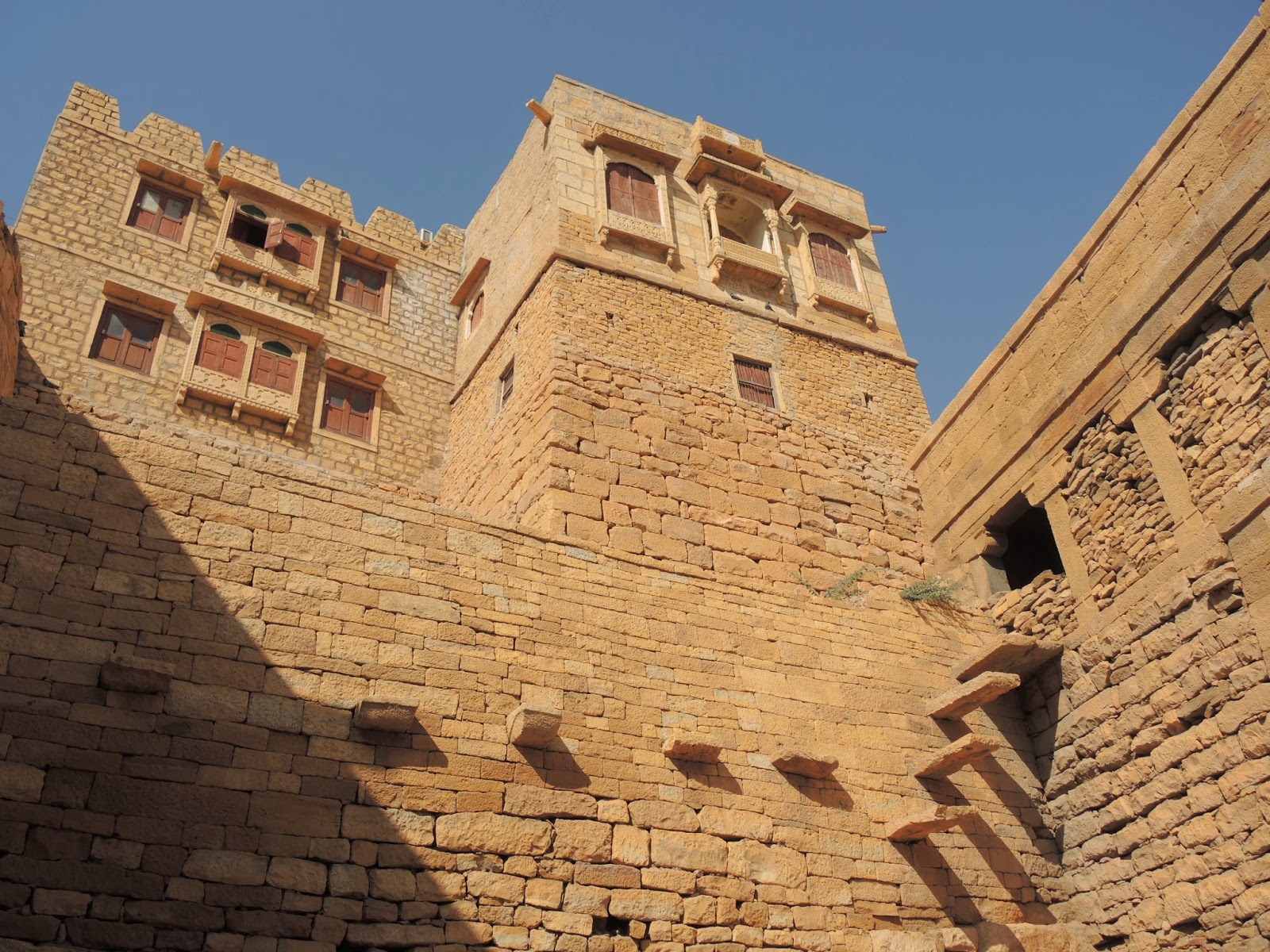 India has really upped it's game recently upon our arrival in Rajasthan; with Udaipur, Jodhpur and now Jaisalmer really putting in a serious shift!

Apart from the city itself giving us a strangely un-Indian feeling, the music was also a bit misleading. While we were having breakfast on our first morning in town, they were playing Imelda May on the radio. It always makes me kinda proud when I hear Irish musicians being pumped out in foreign lands, especially in such far away and seemingly random places like the deserts of Jaisalmer. Like the time we heard Johnny Logan in the small, Taiwanese mountain town of Jiufen. Or listening to Enya as we waited for the movie to start in an Indonesian cinema. Or, best of all, when they played The Cranberries along with the safety announcement on our Air Koryo flight out of Pyongyang, North Korea!

That afternoon, we ventured out into the heart of the maze-like city streets in search of Patwa Haveli - a building which, in itself, was quite beautiful, but most attractive of all were the views from the roof. There was also a familiar feeling as we climbed the steps all the way up to the top, and were treated to another stunning glimpse of another stunning fort... 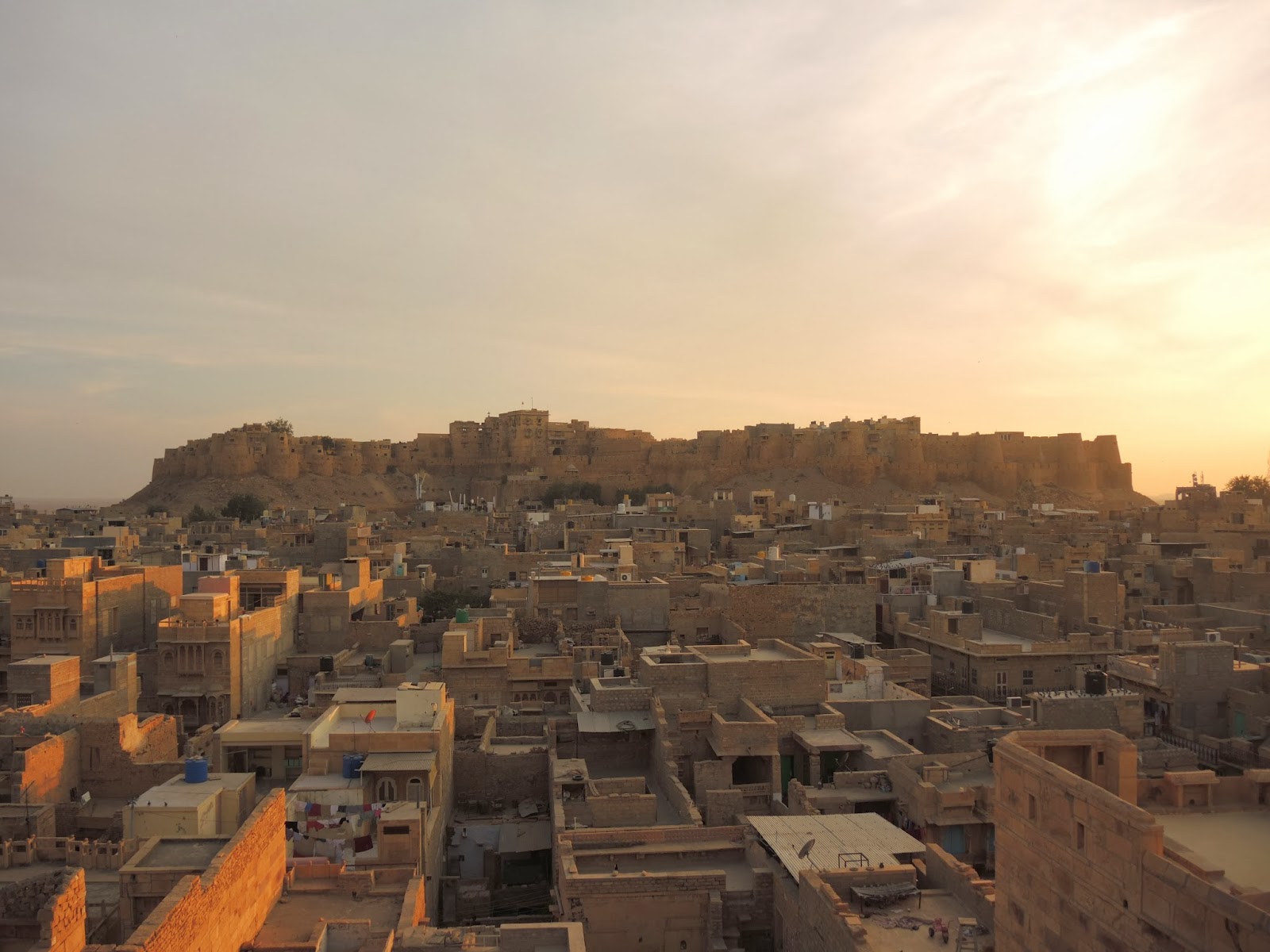 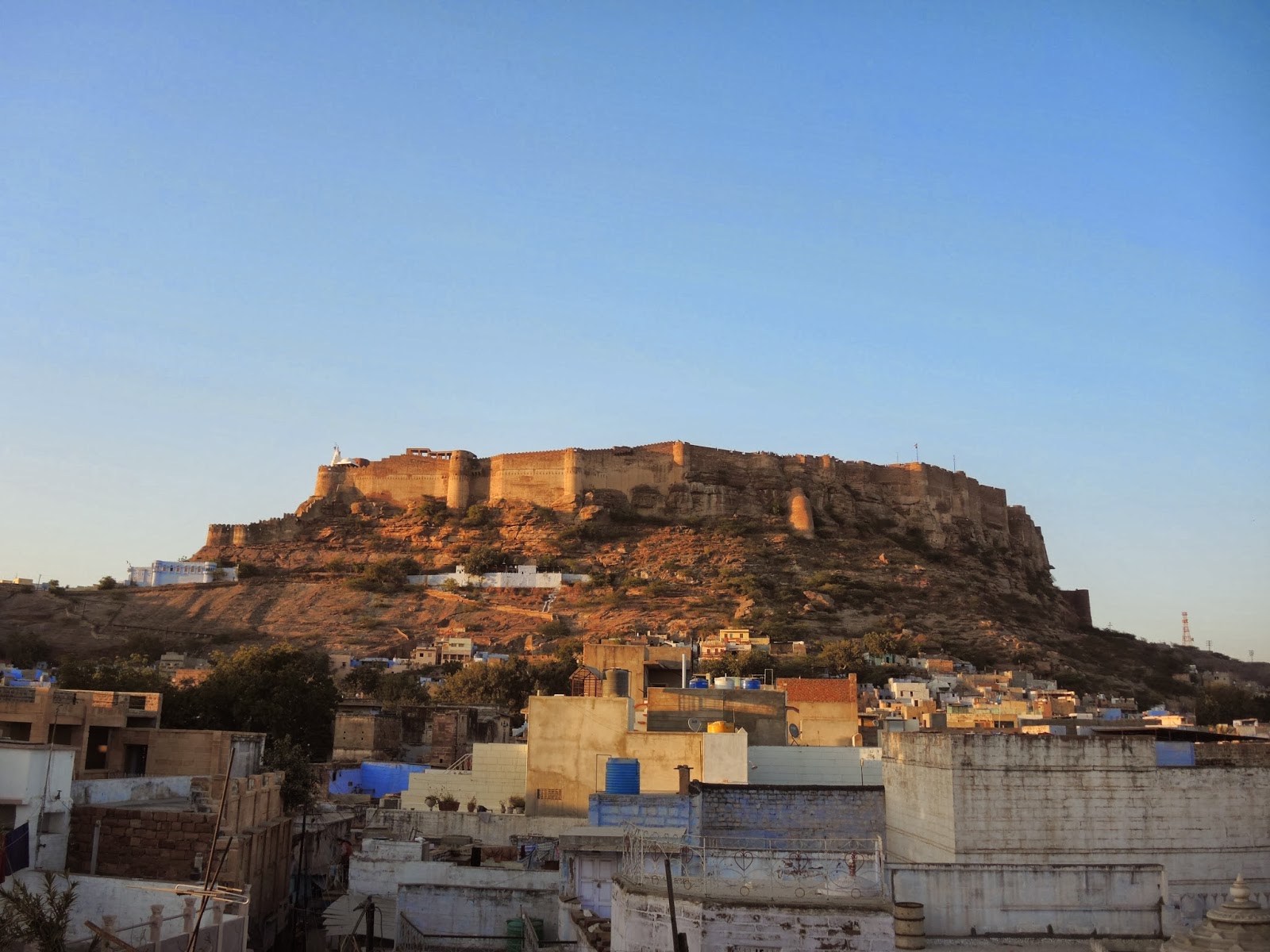 Certainly a sense of deja-vu, or in this case, deja-view.

And it wasn't just the Fort that was there to admire. The whole city was like nothing we had seen before, with an intricate network of alleyways, branching out below us, and a seemingly endless, M.C. Escher style landscape of rooftops and stairwells. 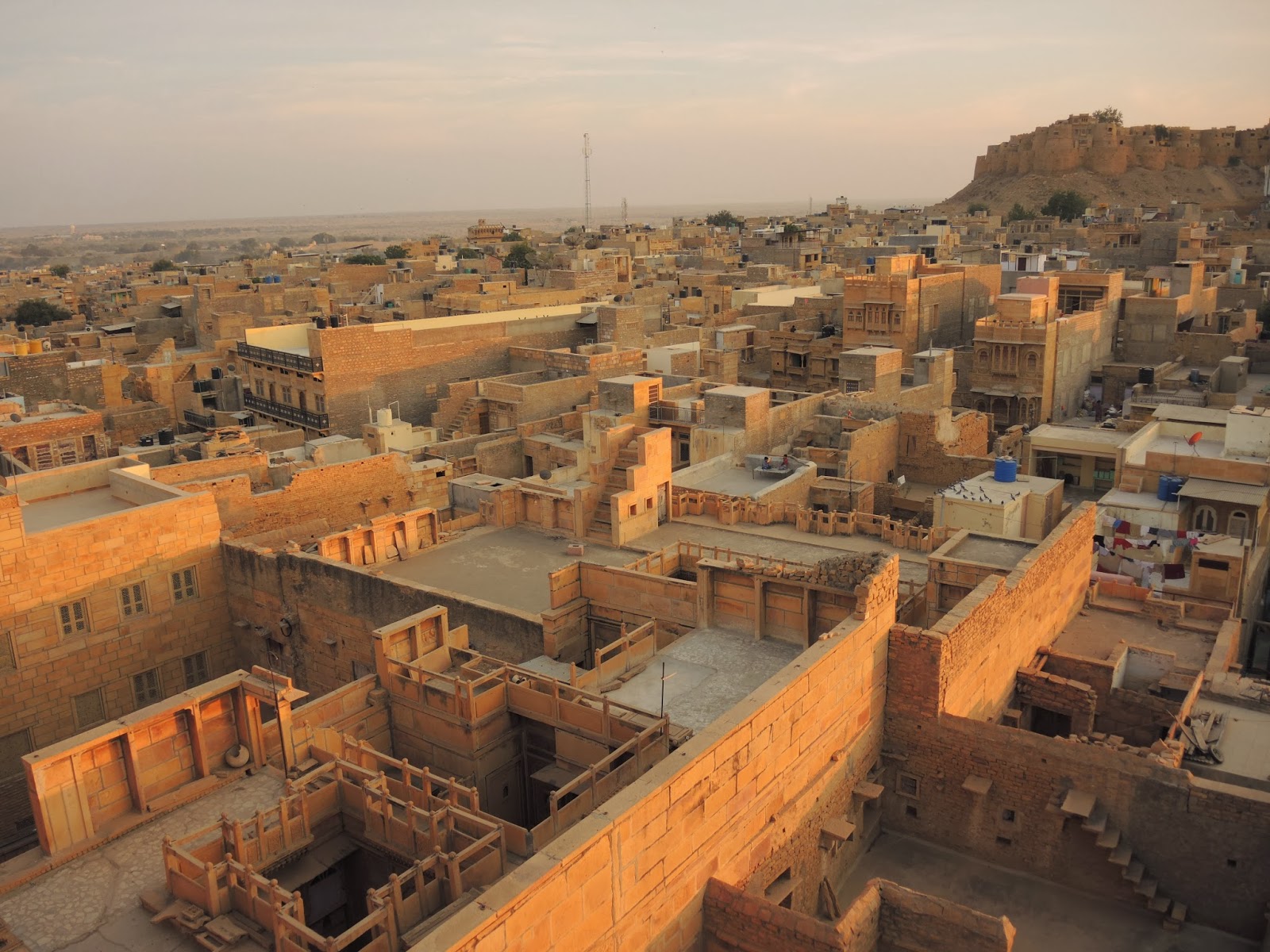 One of the main attractions in Jaisalmer is the Thar Desert, and there are countless tour operators here offering camels treks and overnight stays, but well, we'd kinda been there and done that in Mongolia, so we opted against it. Instead, we just rented a scooter and blazed our own trail. First, visiting the abandoned village of Kuldhara. 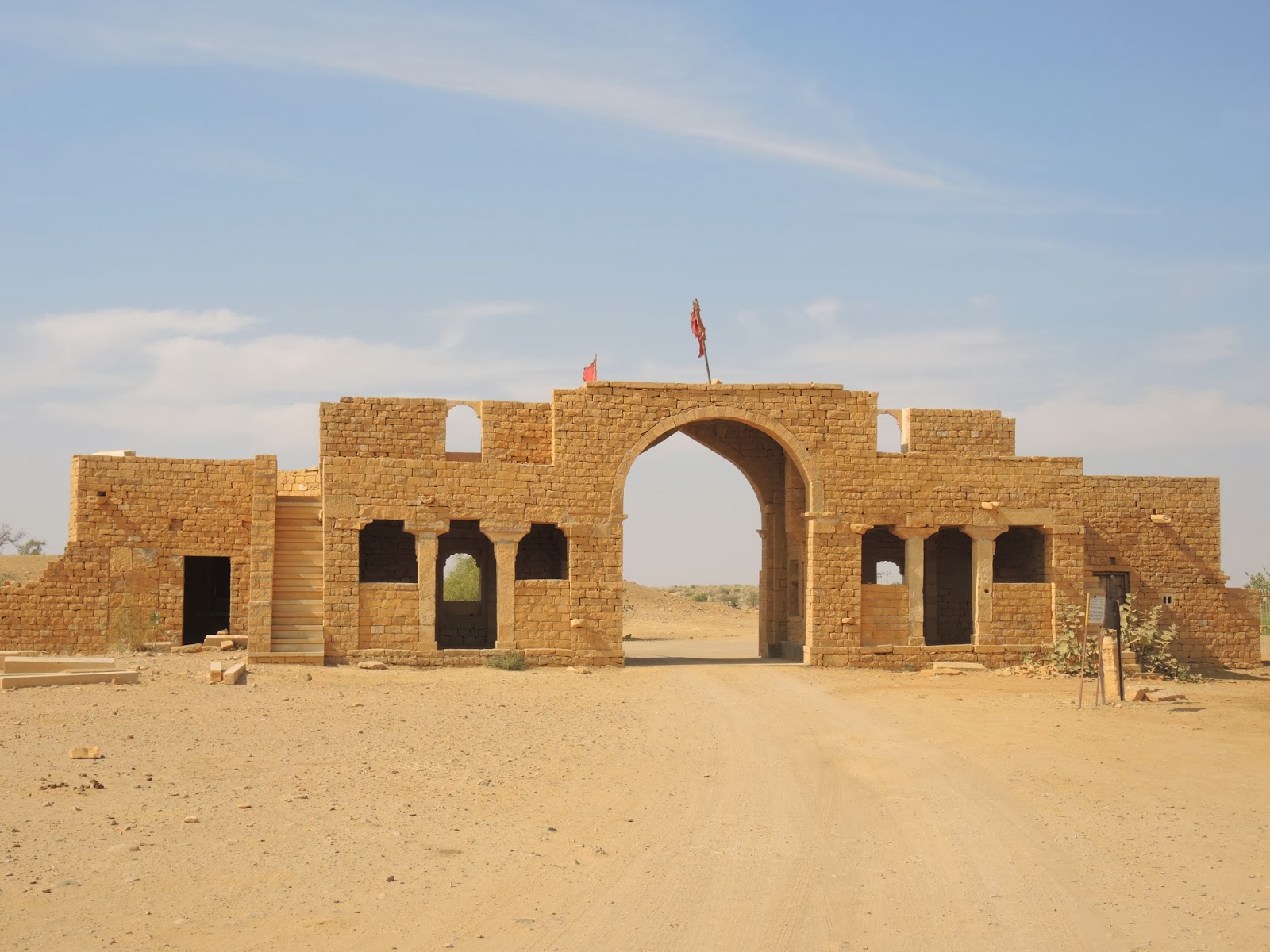 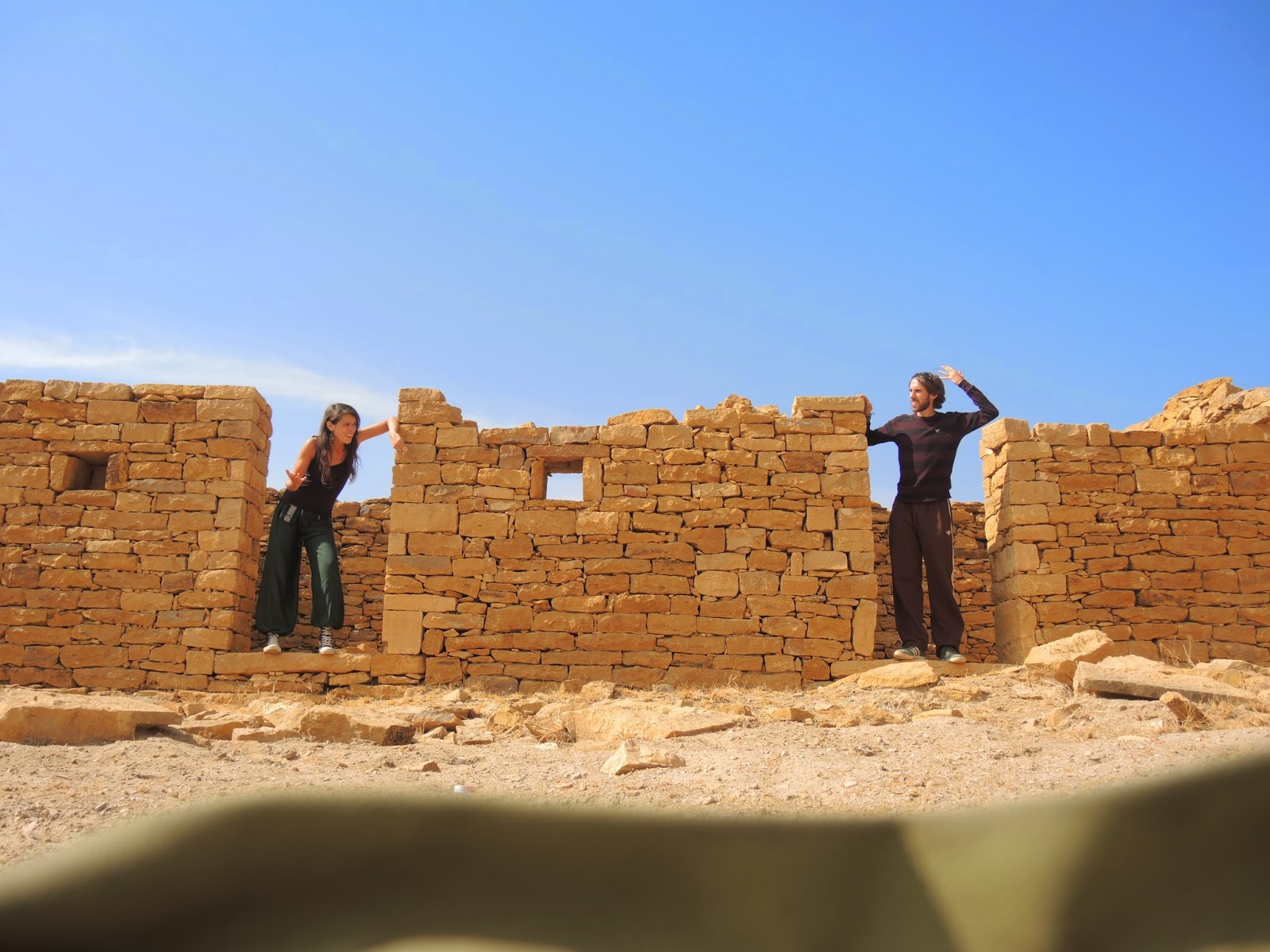 Which is exactly what it sounds like! It's a village, deep in the desert, around 20km from Jaisalmer, that was originally founded in the 14th century, until one night in 1825, everyone suddenly vanished! And not just that, everyone in the surrounding 84 villages disappeared too. There's a story that a government minister from Jaisalmer fell in love with the Kuldhara chieftan's daughter. He threatened the village with heavy taxes unless he was allowed to marry her, but instead of giving in to the minister's wishes, the villagers decided to leave in the middle of the night and nobody ever heard from them again. And since then, the town has been all but forgotten... 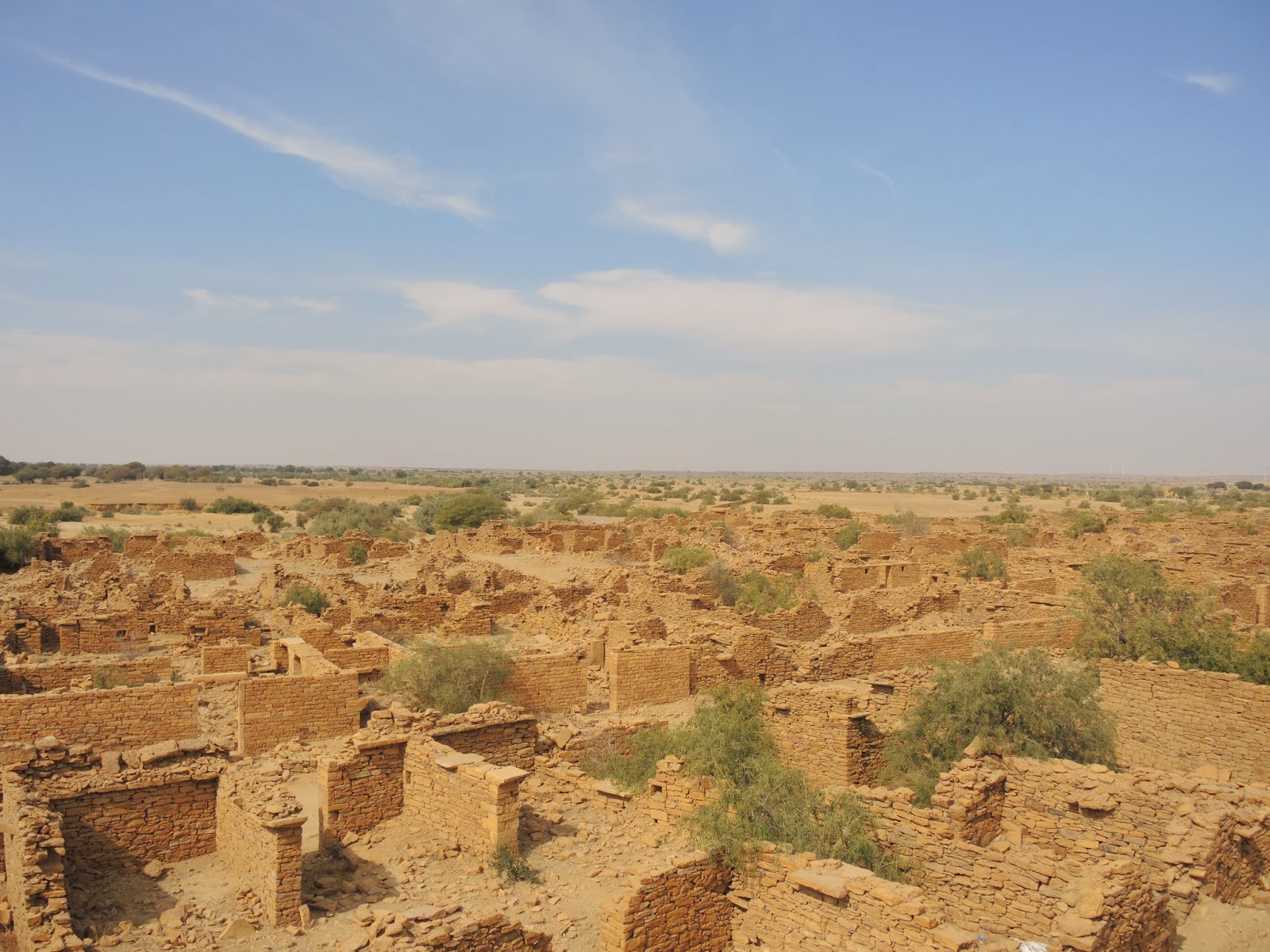 I guess you could say, the place was... deserted!

Kuldhara was well worth the visit, but possibly the most enjoyable part of the day was simply driving along the long, smooth desert highway. It was just really relaxing, zipping around, taking in the scenery and waving to locals on the backs of camels. I don’t know how they knew we were tourists, seeing as we had helmets on, but looking back, they probably knew we weren't Indian BECAUSE we had helmets on! 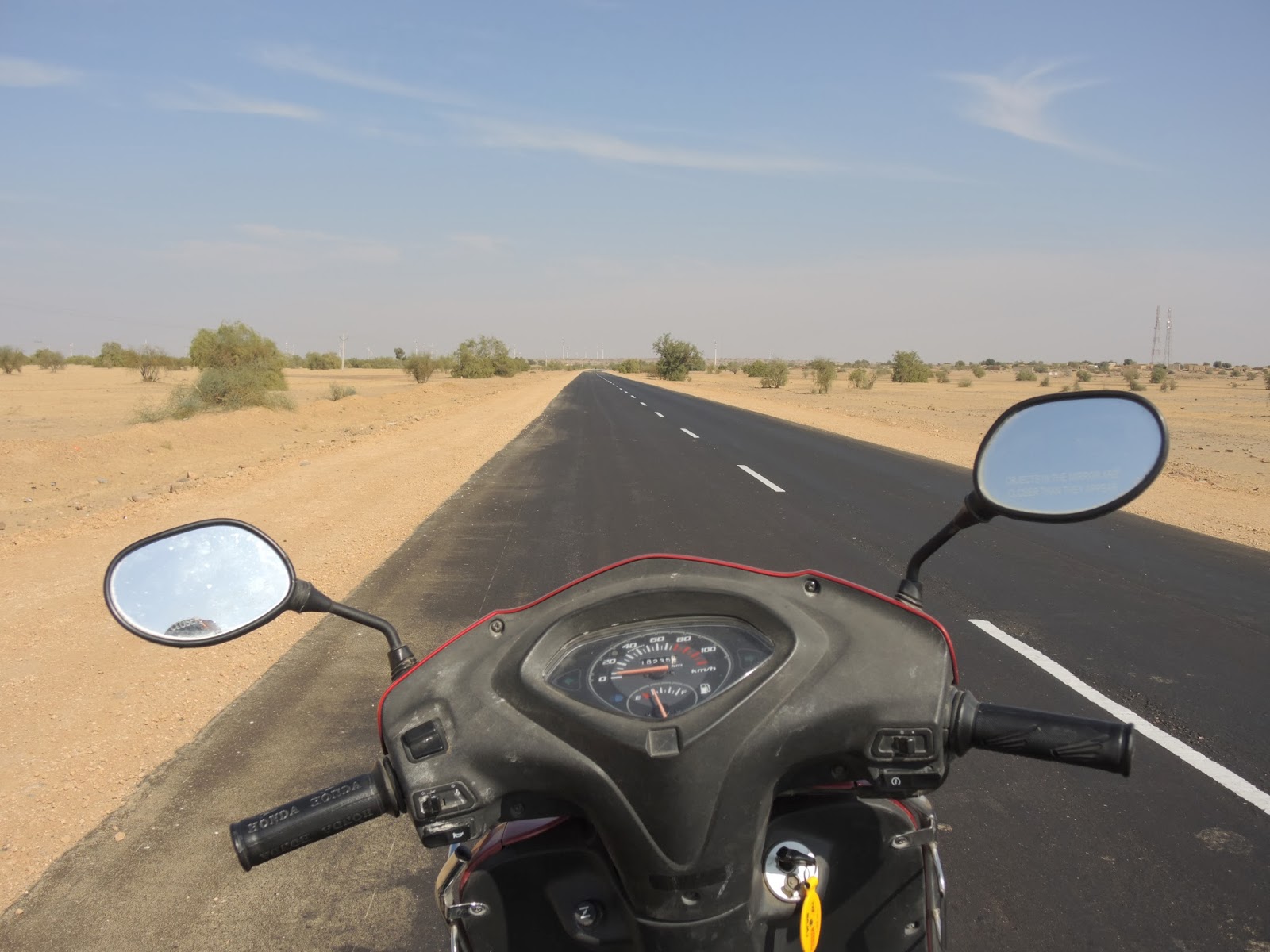 We also continued on to the Sam Sand Dunes, popped in to the royal cenotaphs at Bada Bagh, and even saw a few tornadoes along the way! Well, 'tornadoes' may be a bit generous. They weren't exactly ripping buildings apart, or flinging camels through the air, but they were certainly little whirlwinds.We even had to slow down on a couple of occasions to let them cross our path. 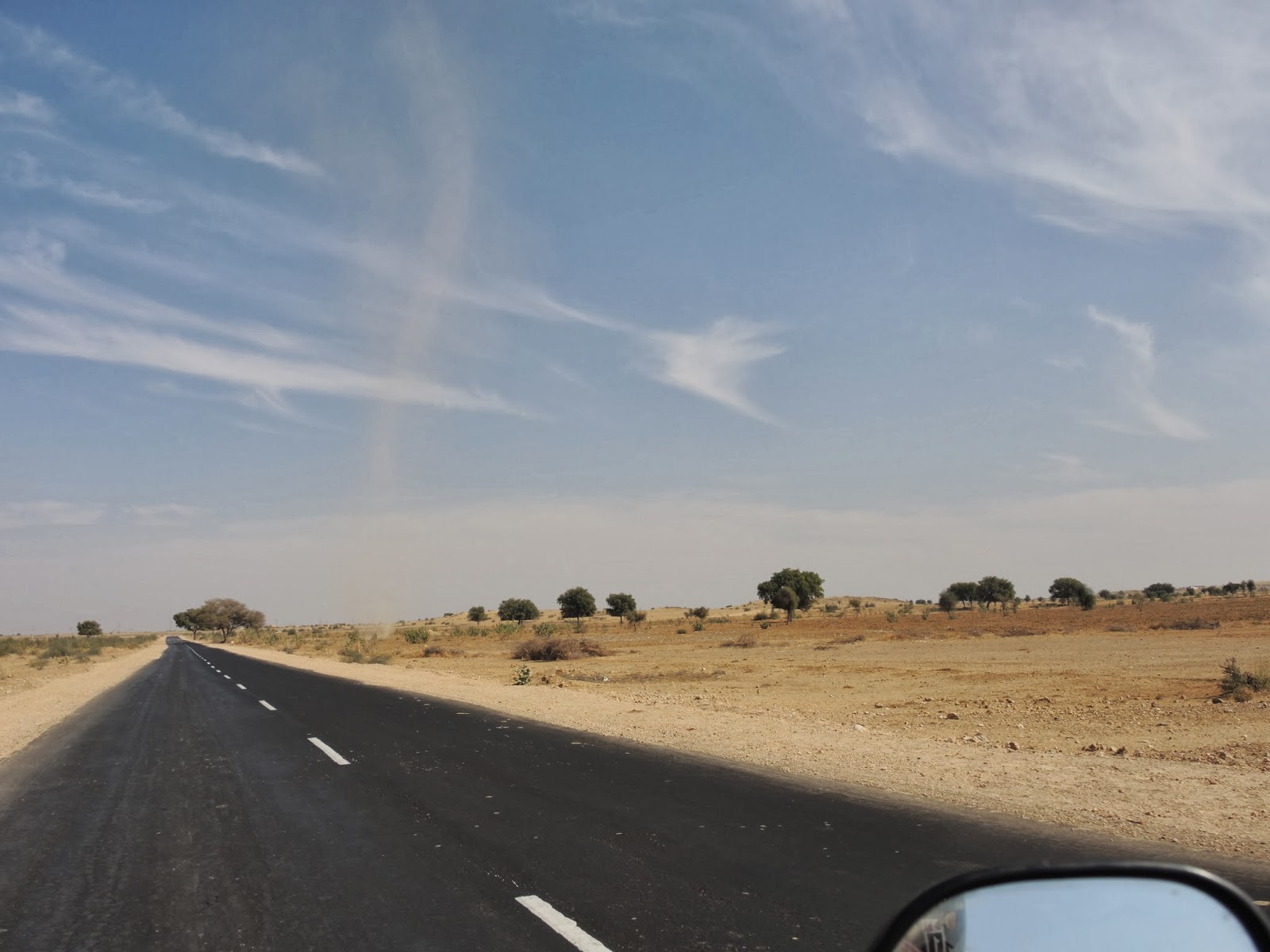 Obviously it's hard to take a picture of wind, but you can just about see it there.

On our third and final day in town, and after two days of looking at it, we finally paid a visit to Jaisalmer Fort itself. It’s much different to the previous forts we've visited in Jodhpur or Chittorgarh, in that it’s actually part of the city, and the internal alleys are lined with shops, restaurants and guesthouses. I guess that makes it unique in its own way, and it was cool to walk around and see something different, but it certainly wasn't as picturesque as the others mentioned above.


We also went for a walk to the very pretty, Gadisar Lake, which was really no more than a little pond, but well, I guess we are in the desert. The fact that there is a lake here at all is quite impressive. 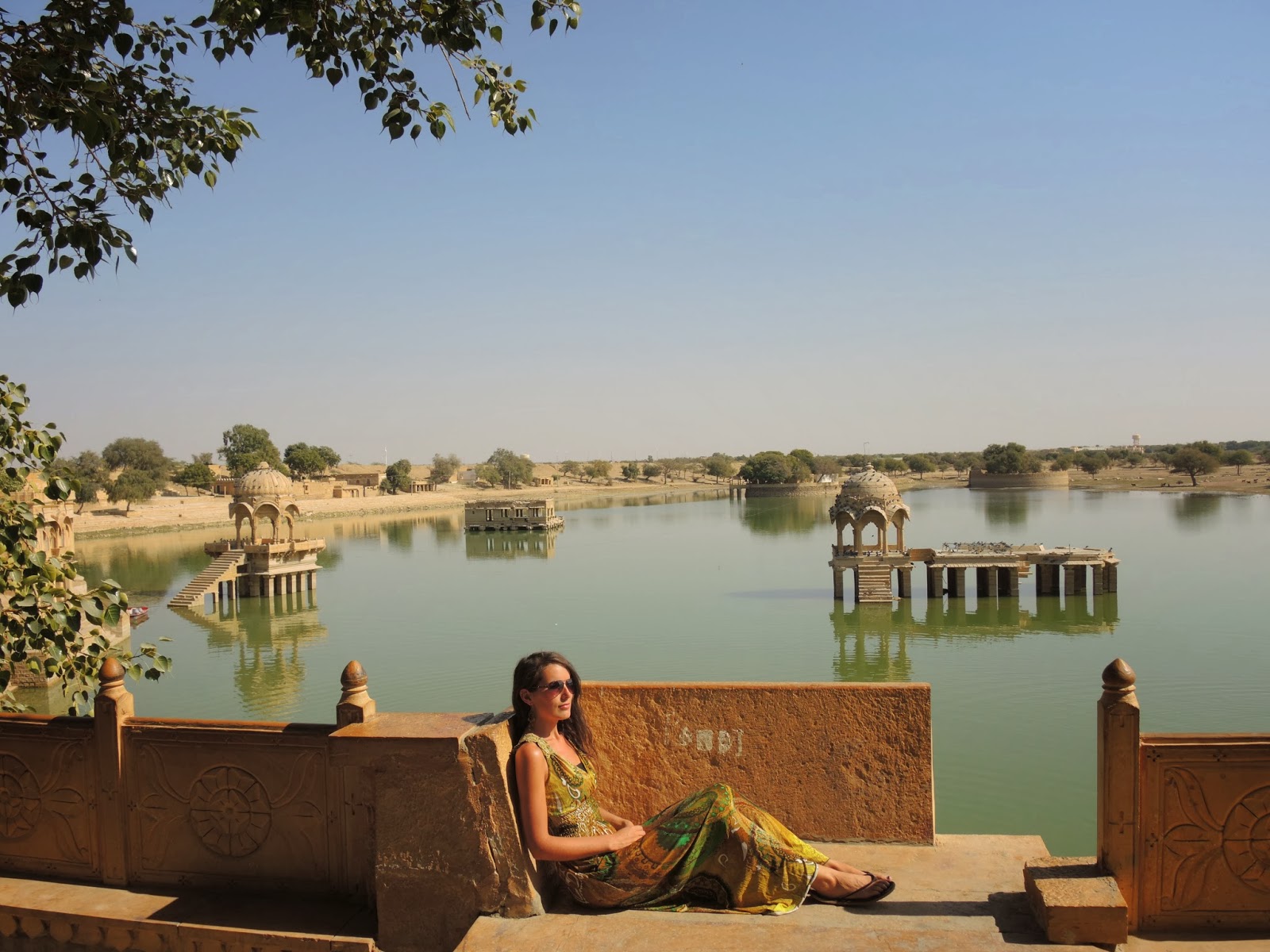 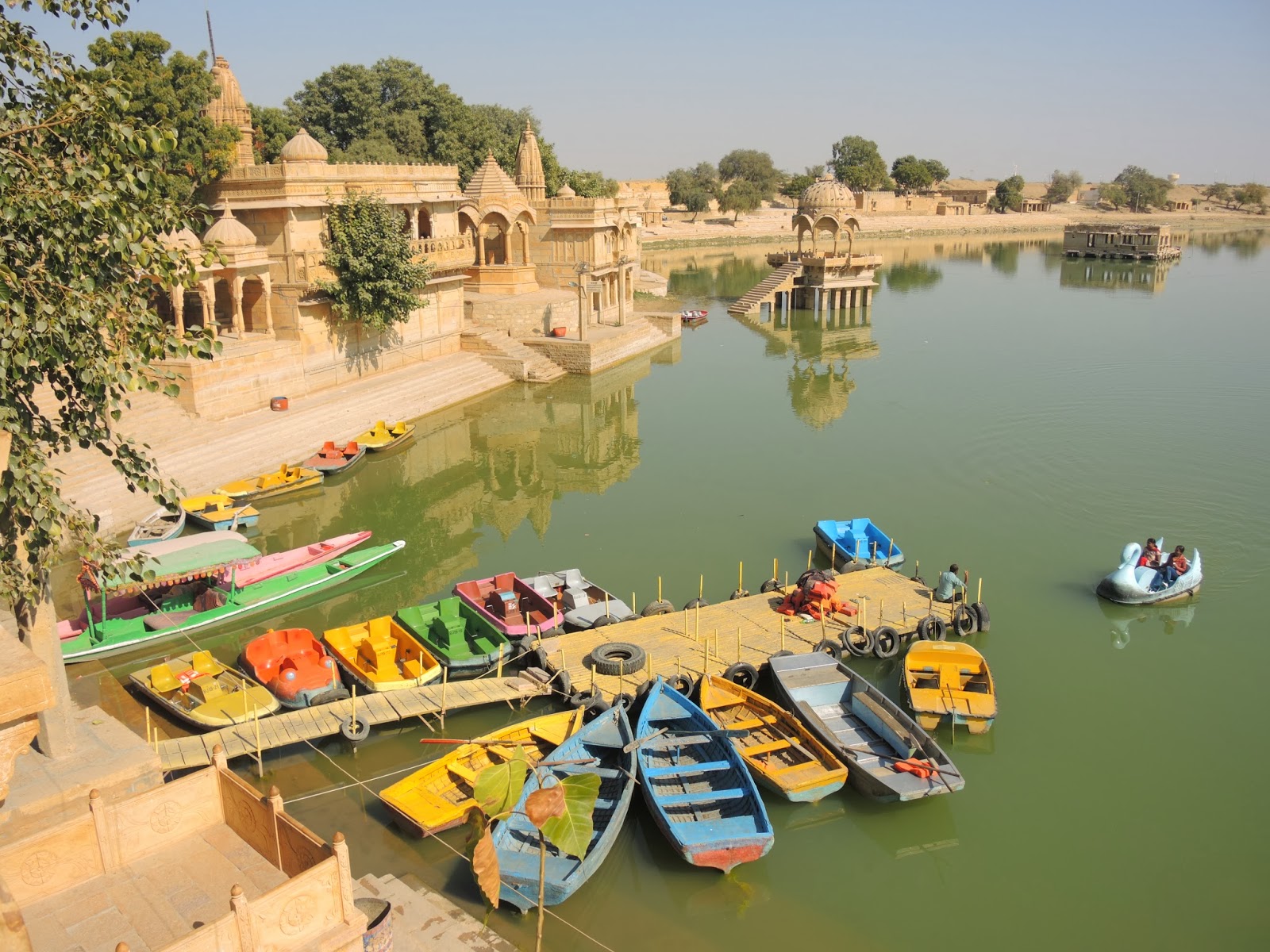 And that was about all. We had another train to catch that evening to Jaipur, so before we left for the station, we got a good feed and made a video diary in our guesthouse's rooftop restaurant.

Seeing as we've taken so many night trains at this stage, here are a few tips for anyone planning on travelling around this way (which you definitely should!) - second class carriages are fine (first class is obviously a bit nicer, but anything below is a lot worse!), book your tickets well in advance (two months before is when they go on sale), and when you do book, try to get the side bunks as they have more privacy than the central four which are open plan.

So, I guess we'll see you in Jaipur then!