When we were making out our list of destinations, long before the trip had started, we were humming and hawing about whether to include Jodhpur at all as we had heard mixed reviews. We decided to give it a day in the end as it was en route anyway, and it had a couple of things worth seeing. Really we had very little expectations, and I was actually wondering how I’d write a blog entry about a single day in a mediocre town... I needn't have worried, Jodhpur was absolutely incredible! It really was! A dark horse if ever there was one! We only had a day here but it was probably the best day of the trip so far! 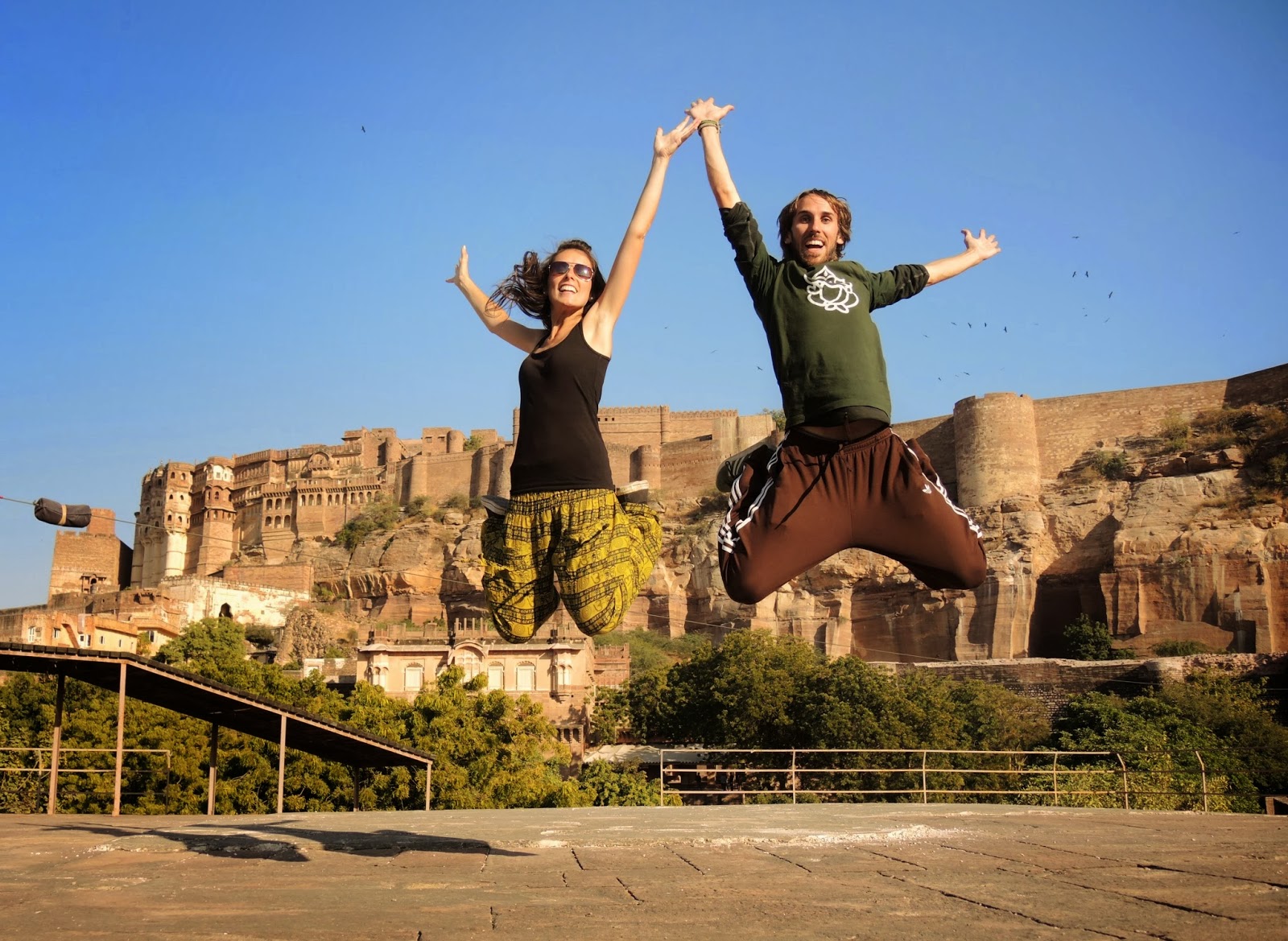 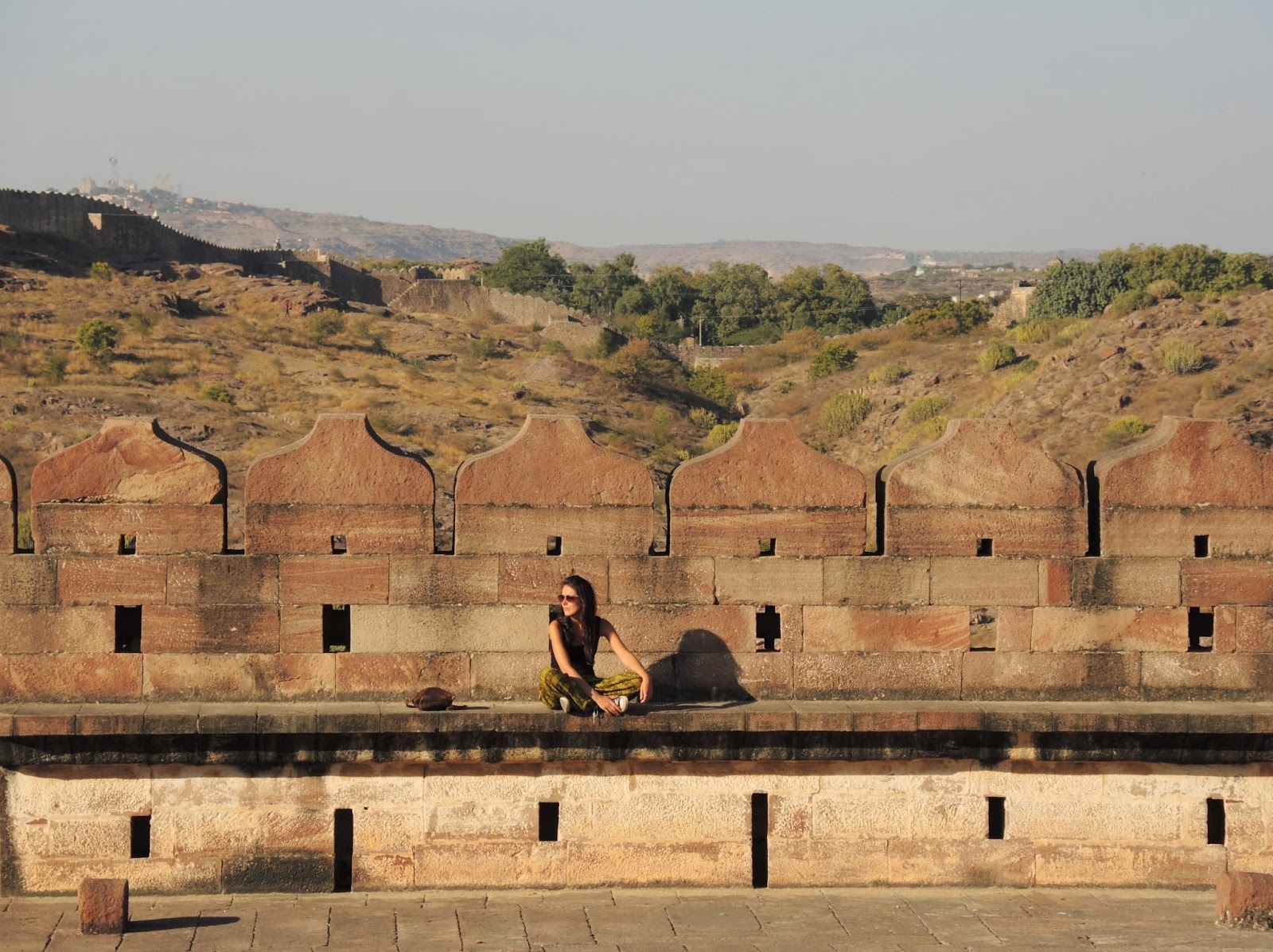 I mentioned last time around that we were taking a night bus here from Udaipur, certainly not ideal, but there's no train line between the two cities, and we didn't want to waste a day by travelling during sunlight. We had little choice, so we booked two sleeper tickets, leaving Udaipur at 9pm and arriving in Jodhpur at 5am - a little early in the morning, but this was actually the latest time we could get.

At this point, I just want to say that we've taken night buses before in Laos and China, and they were actually quite nice. But we just knew that India was going to be a different story...

So, we arrived at the travel office at around 8:30pm and waited for our bus. Maybe 20 minutes later, we were called up to the main desk and informed that our bus would be delayed by 3 hours, and that we could either wait for it, or get a seat (that’s seat, not bed) on a bus that was leaving right away with a different company. Of course, we’d have to pay for the priviledge to downgrade. It’s one of those situations where you’re really at the mercy of the people in charge and even though the whole thing stank of bullshit, there wasn’t much we could do. Even now, I wonder what other options there were in the situation... I guess we could've called his bluff and said we'll wait for our bus (if it even existed). The problem was, a) we didn’t want to wait 3 hours in their dusty roadside office, and b) we certainly didn’t want to wait 3 hours with the strong suspicion that no bus would actually show up. So, we just had to swallow the crap they fed us, pay the money, get on the new bus and try (largely in vain) to get some sleep.

Fast forward a bit and we're abruptly woken at 2:30am, apparently we're in Jodhpur, even though we're not due to arrive for another 2 and a half hours. We seem to be the only ones getting off here too. Again, this is another situation where your fate is really in the hands of these dodgy operators. We couldn’t really say “I don’t believe you, we’re staying on the bus”, so again, we just had to trust them and stepped off, not at a bus station or anything, just by the side of the road. We really could’ve been anywhere in India at that stage and we wouldn’t have known any better.

There was one rickshaw waiting there as we alighted - a stroke of good fortune, or was the night about to get a whole lot worse? Well, again, we didn't really have much choice (or much bargaining power), so we negotiated a price to the old town. The fact that he acknowledged that we were actually in Jodhpur was a relief at least, he then took out his phone and showed me a message, with my name on it! As it turns out, our guesthouse had paid him to collect us at 5am, so I guess he was just driving around, looking for passengers until then, and he found us! Double phew - we were in the right city, and more importantly, this guy wasn’t just some late-night opportunist, ready to drag us off to his rape cave!

Even though we weren’t due to arrive at the hostel til after 5, we showed up before 3am, and in fairness they couldn’t have been nicer about it. All of their rooms were full but they gave us blankets and pillows, and let us sleep on a couch in the reception area until the morning, free of charge! We were just glad to be somewhere safe and lying down!

So, Jodhpur started with a pretty topsy-turvey entrance, but after that it was all smooth sailing! I mean, just look at the first thing we saw the next morning when we climbed the stairs for breakfast: 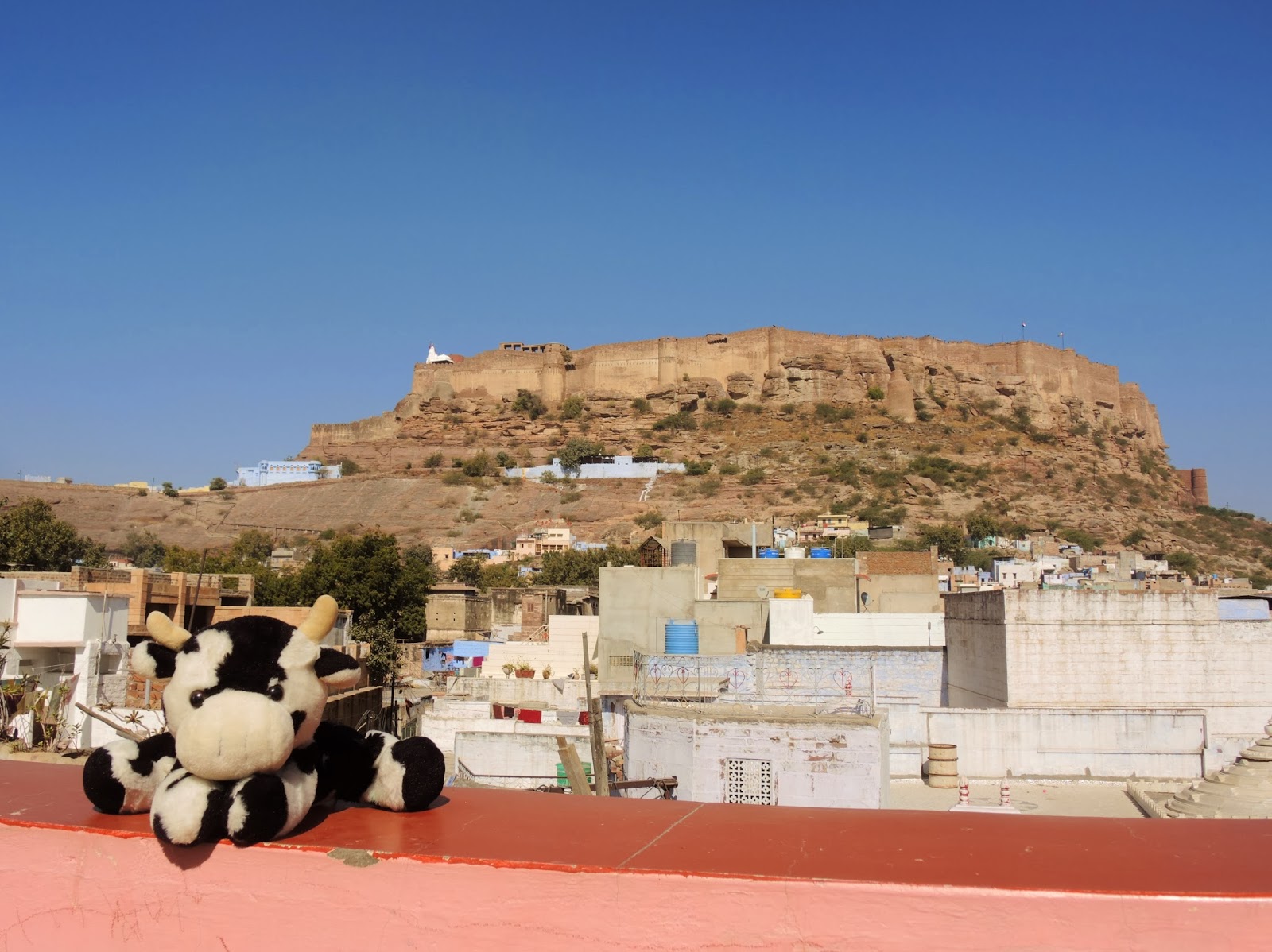 Sorry for the long-winded intro, I promise the rest of the entry will be just like Jodhpur - picture perfect! We only really saw a couple of things, Mehrangarh Fort being the main focus of our attentions, but that alone can easily hold its own up there with the best things we've ever seen. And as you can see from above, our guesthouse (Hem Guesthouse - they deserve a mention for being so nice) had incredible views of it from their rooftop restaurant. And if you're thinking it looks slightly familiar, you might just recognise it from The Dark Knight Rises. 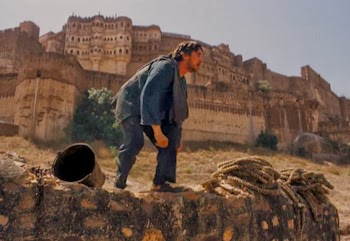 And if you haven't seen The Dark Knight Rises, then congratulations! Your life is 3 hours better off!

Our guesthouse was located in the old part of the city which, like Chittorgarh (if you can remember from the previous entry) is quite blue! It was a great area to stay in too as you really felt like you were stepping back in time, walking these narrow, winding streets, up to this grand fortress, looming overhead. 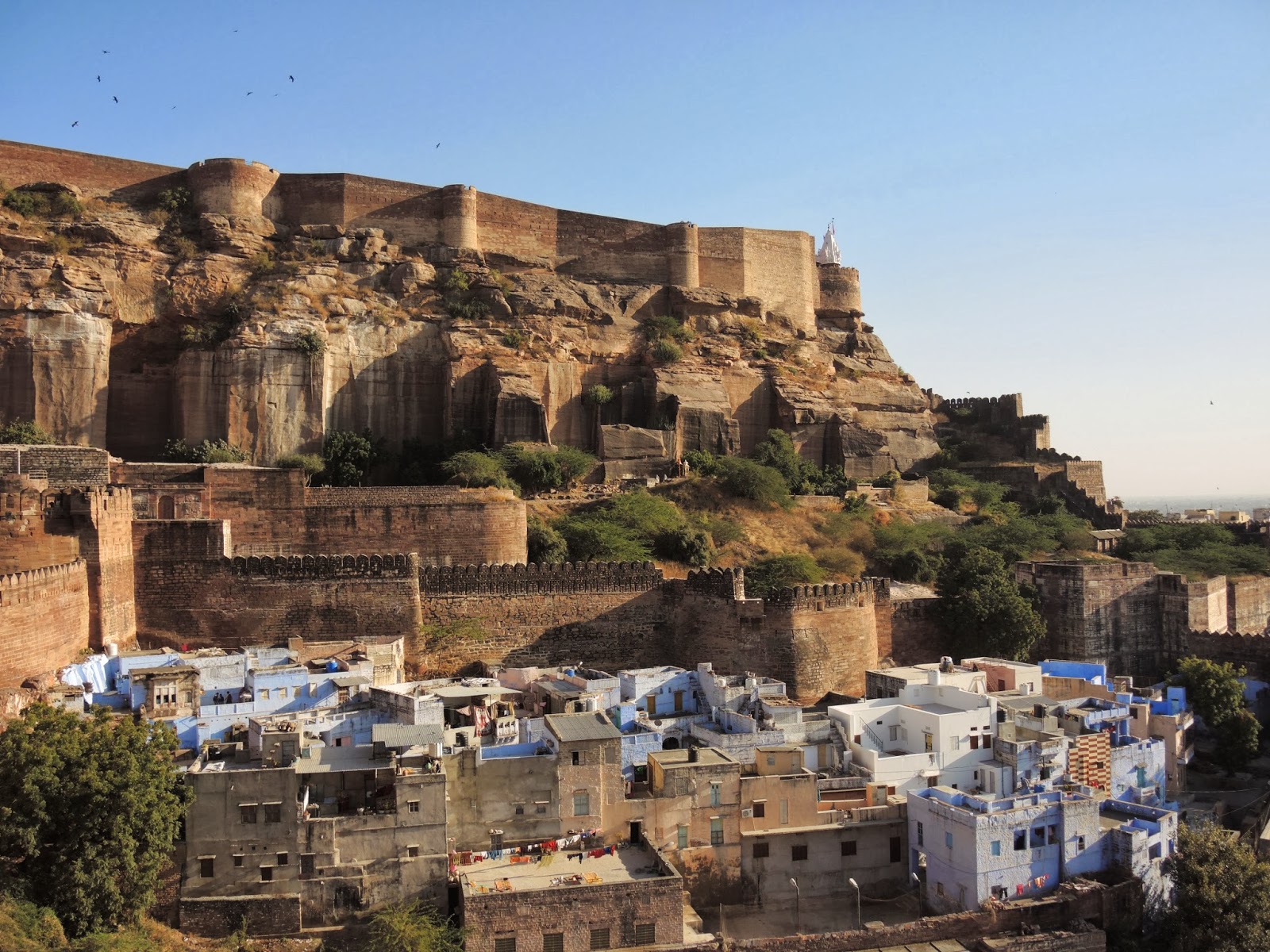 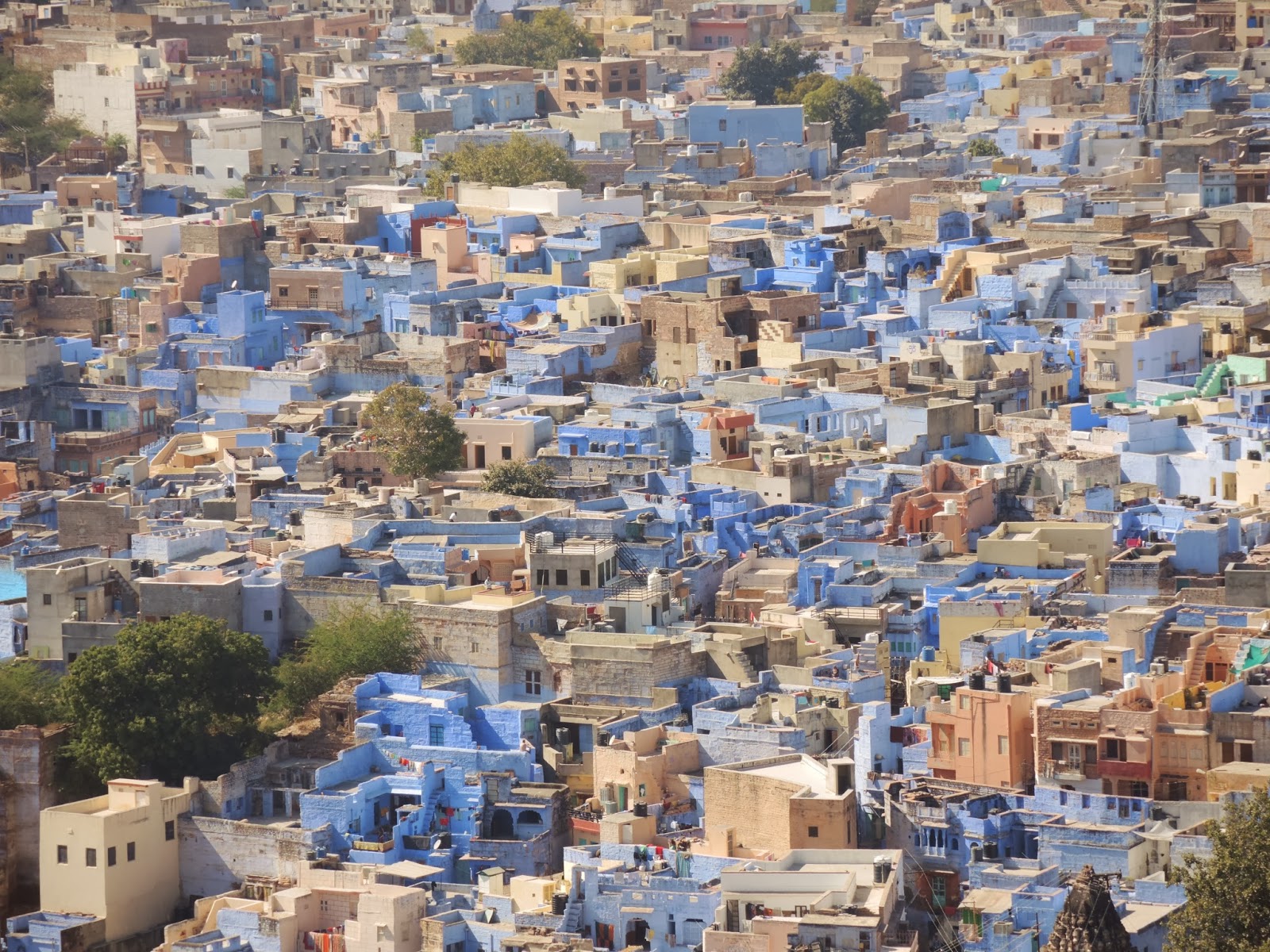 Some places we've been on our travels look lovely and pretty from the outside, but fall on their faces once you step through the gates. Not so with Mehrangarh. We've also come across a few sites where guide books tell you to spend half a day, and we're often out the gap in less than an hour, but again, not this place.

Why? Well, first of all, the fort is beautiful; on the inside, on the outside, views of it, views from it - everywhere you look, you can't go wrong! 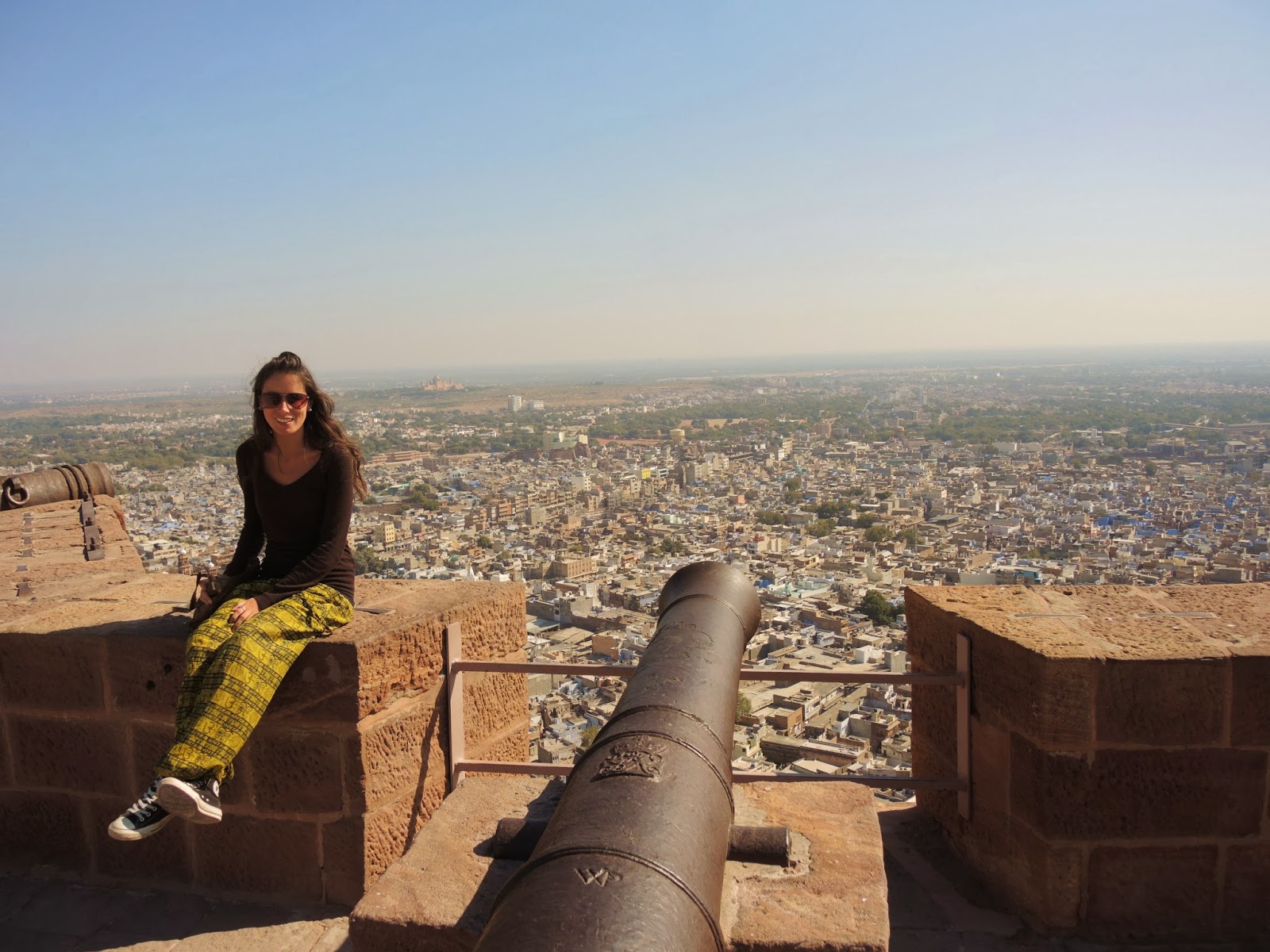 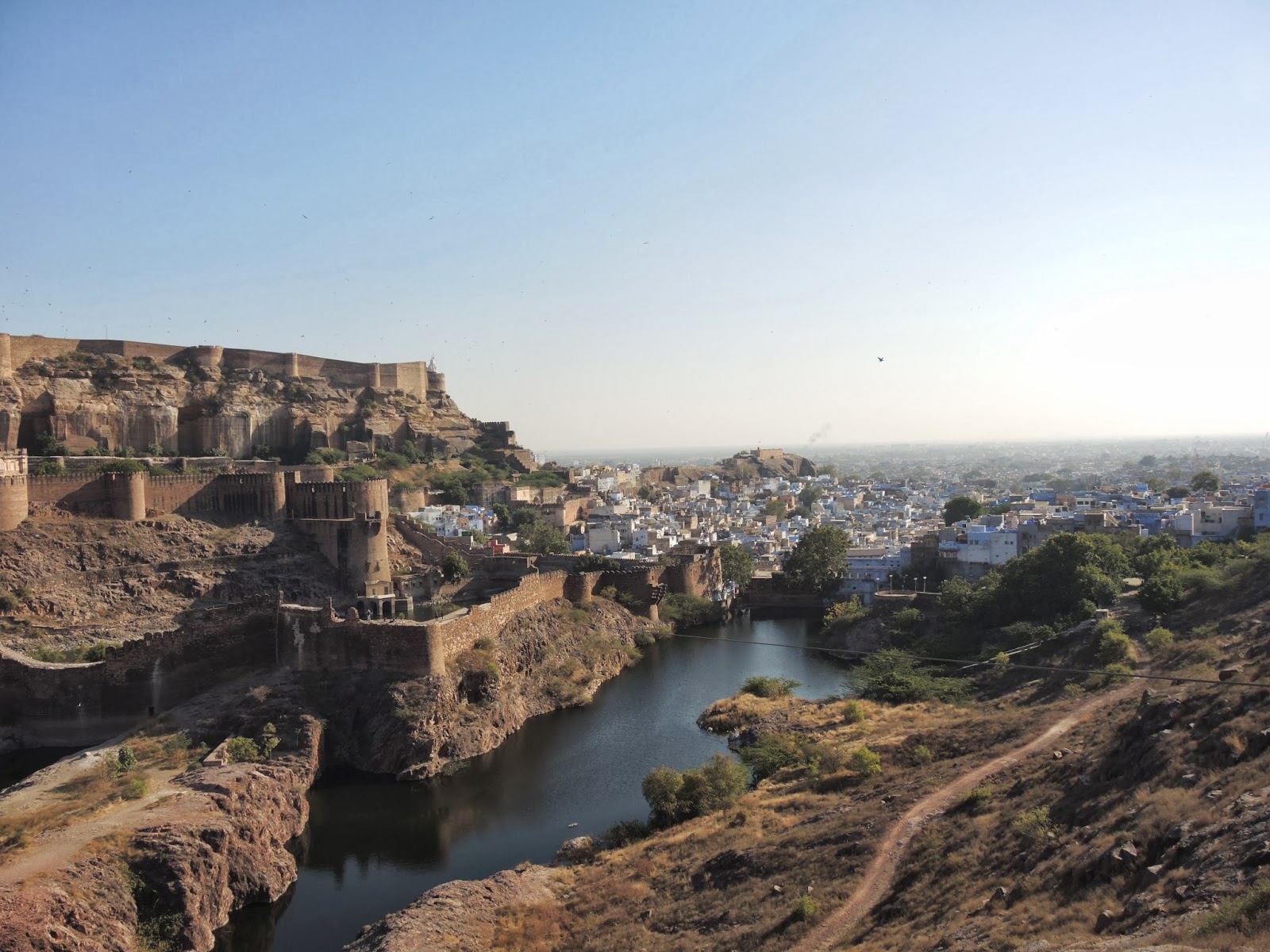 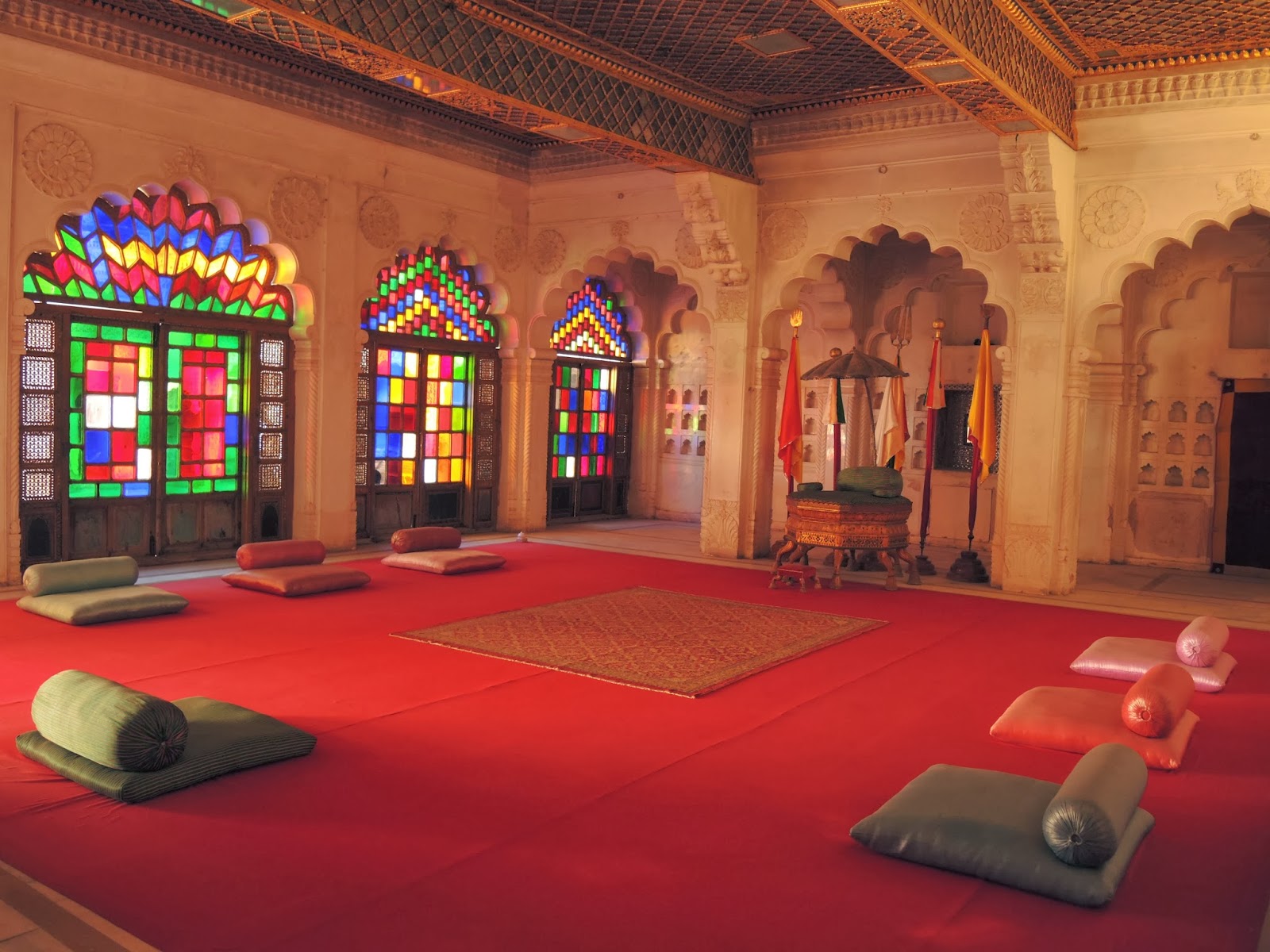 You even get a free audio guide with your entrance ticket which was interesting in parts, plus you could just skip anything not worth learning about anyway. At the very least, it leads you around the grounds so you don't miss anything. And well, it's free!

The fort also had a few quirky little attractions to make your visit even more memorable, and you know how much we love things like this! The first was a palm reader. I'd like to say I went in there with an open mind, but I didn't, and this experience only served to wedge it shut even more. I'm still glad we did it though! He started with me, reeling off generic statements and character traits that could apply to anyone,

He even used a magnifying glass and a protractor at one stage because, of course, this is a real science. He then moved on to Aisling and again said nothing to set him apart from a tabloid horoscope. He even said she'd do very well in her career at the age of 24... Now, if you're psychic, you should at least have a rough idea of someone's age, and if not, overestimate surely, say 34 or 44! But that's not even the worst part; we wrote down our dates of birth at the very start! Not only was he atrocious at cold reading, he doesn't even have a grasp of basic arithmetic! 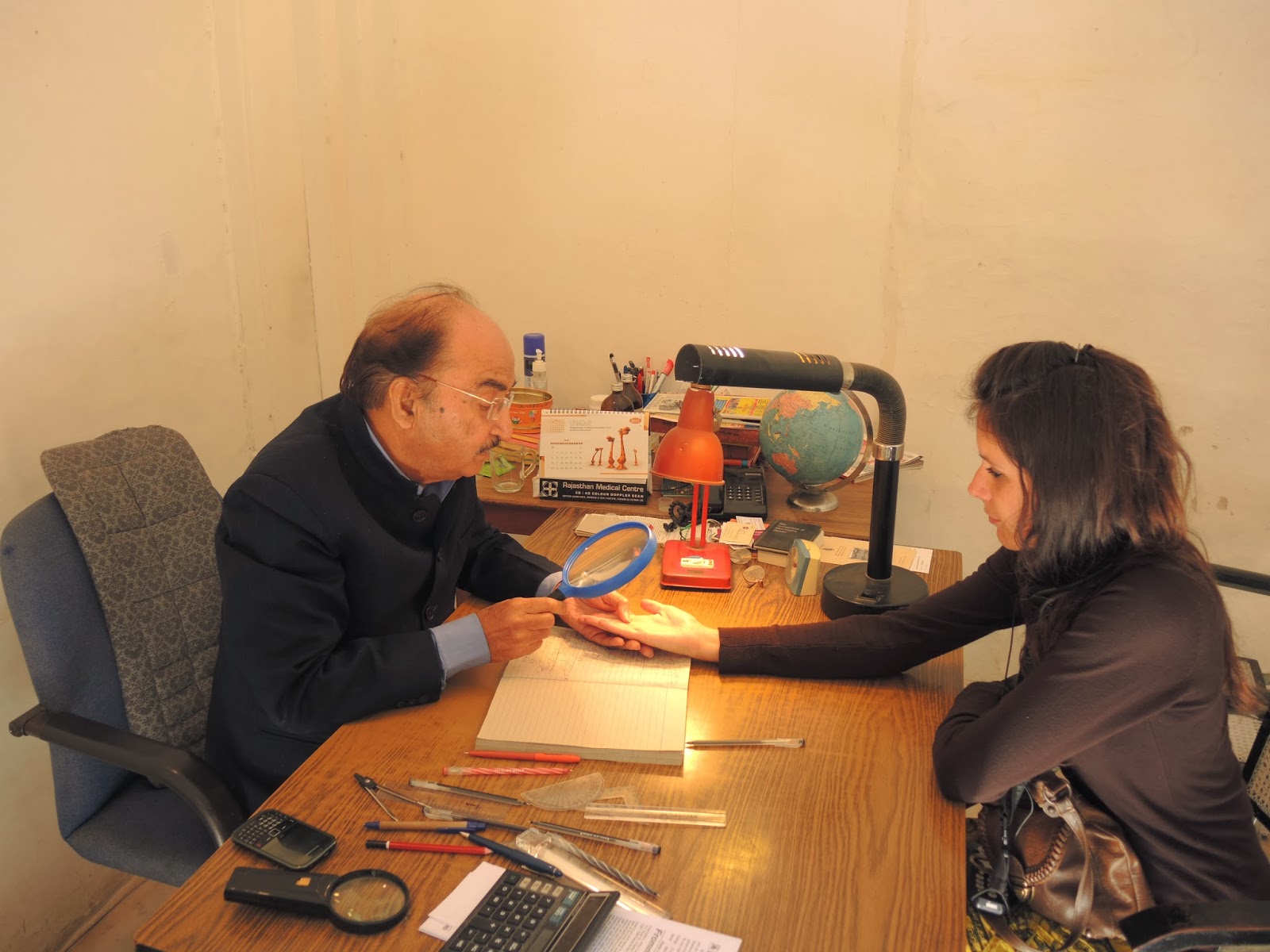 But as I said, check him out! It's worth the fee for the laughs alone!

After that thoroughly life changing experience, we actually had a thoroughly life changing experience! Well, if not life changing, then certainly life enhancing. It was... yes, I think I'm going to say it, the best thing we've done on all of our travels. All of them. Ever. Mehrangarh Fort is amazing enough as it is, but do you know what would make it even better, correction, do you know what would make absolutely anything even better? Ziplining. I’d zip from one pile of dirt to another and be thrilled with myself, but throw in the simply astounding beauty of this place and you’ve got a match made in heaven. 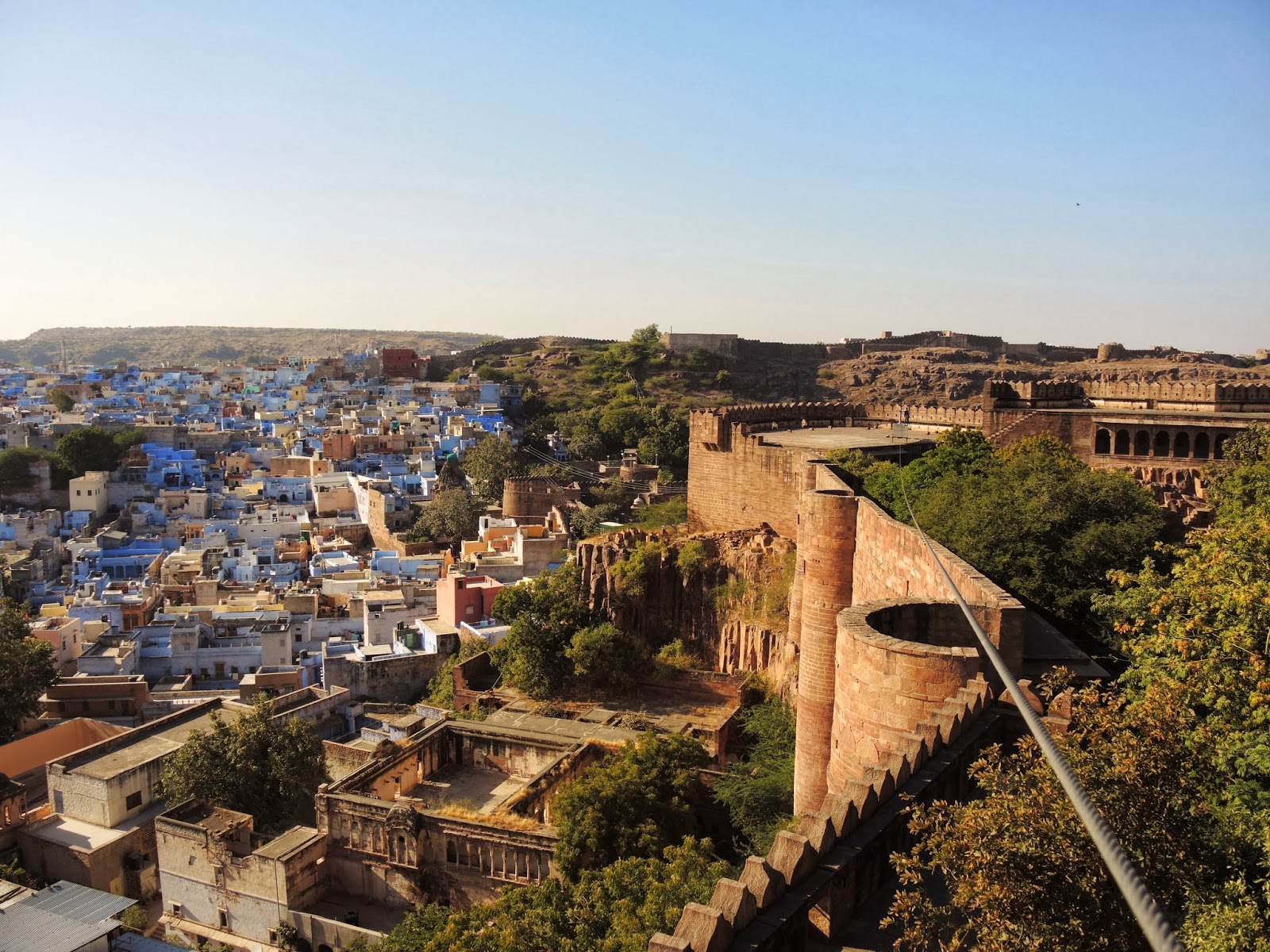 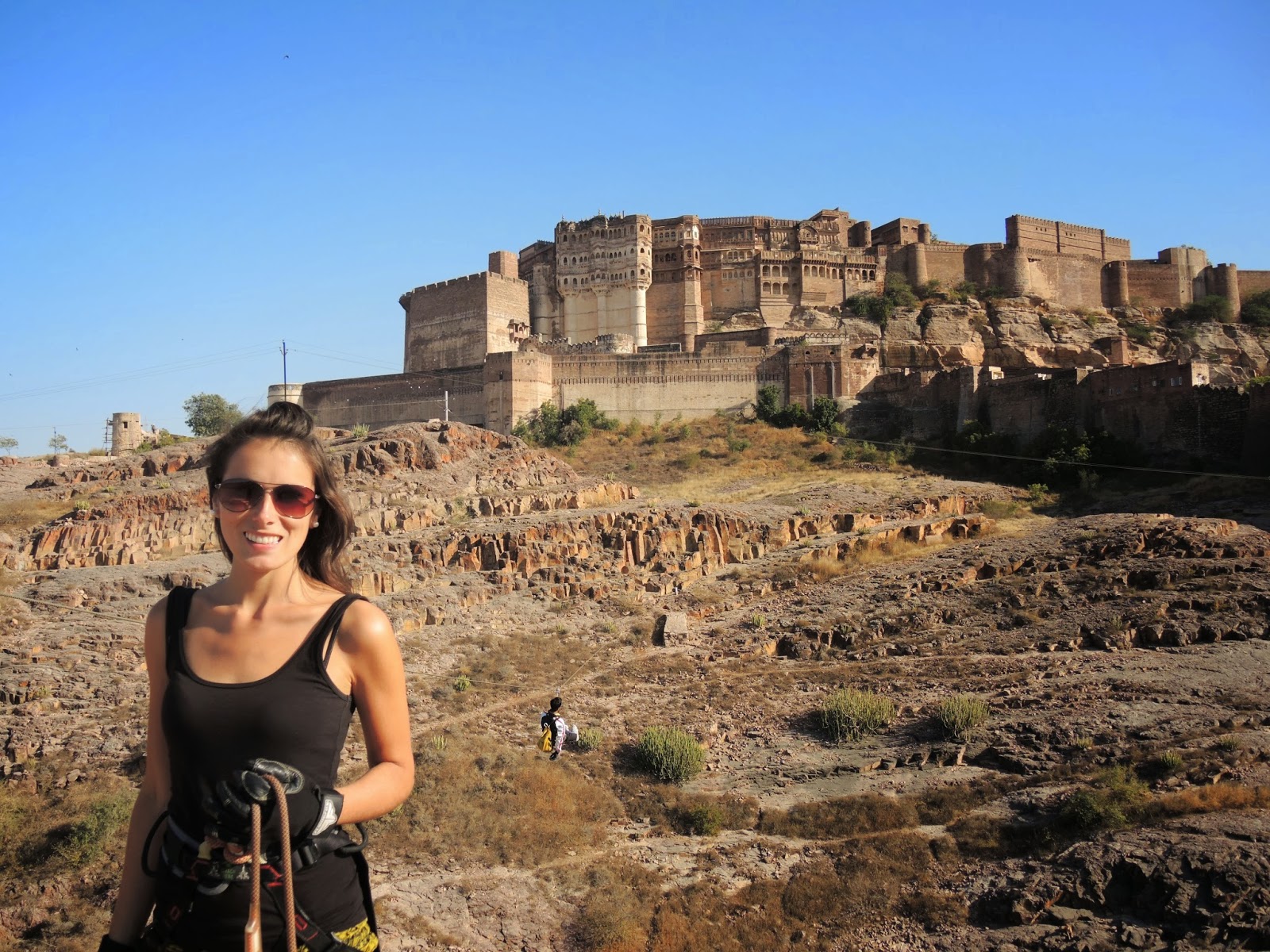 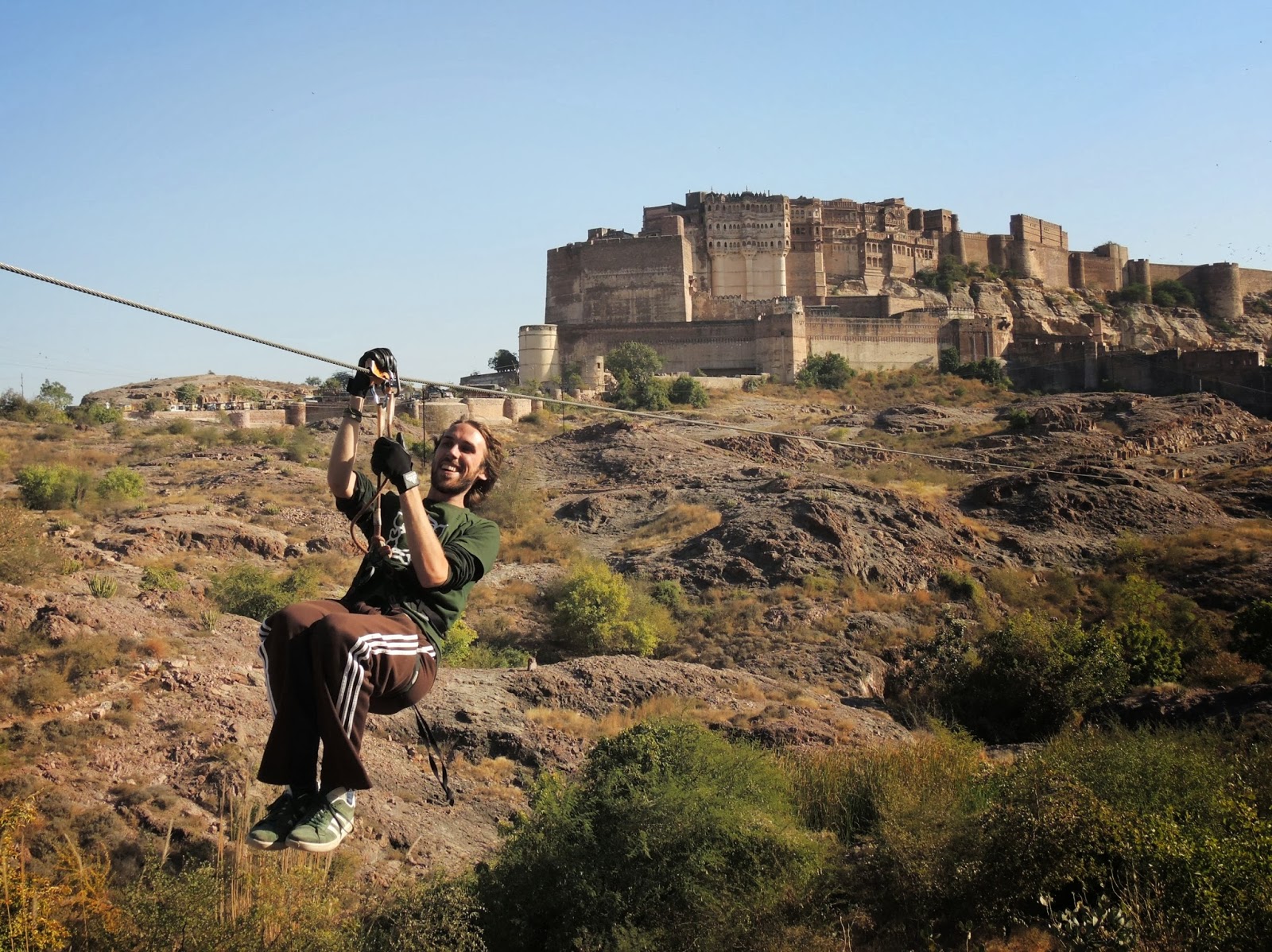 It's with a company called Flying Fox, and there are 6 ziplines overall, taking you around the outer walls and giving you views of the fort and the Blue City that you otherwise wouldn't see. It really was spectacular and we loved every second of it. And even better was that we were the only two people there, so we didn't have to wait in line, or have other people in the way of our photos - the whole thing was just perfect!

We made our video at the end point too, which is worth watching simply just to see the fort in real time:

We did a couple of other things on our one and only day in town, like the nearby White Temple, and the Royal Palace, which were both nice and all, but Mehrangarh was where the action was at!
- 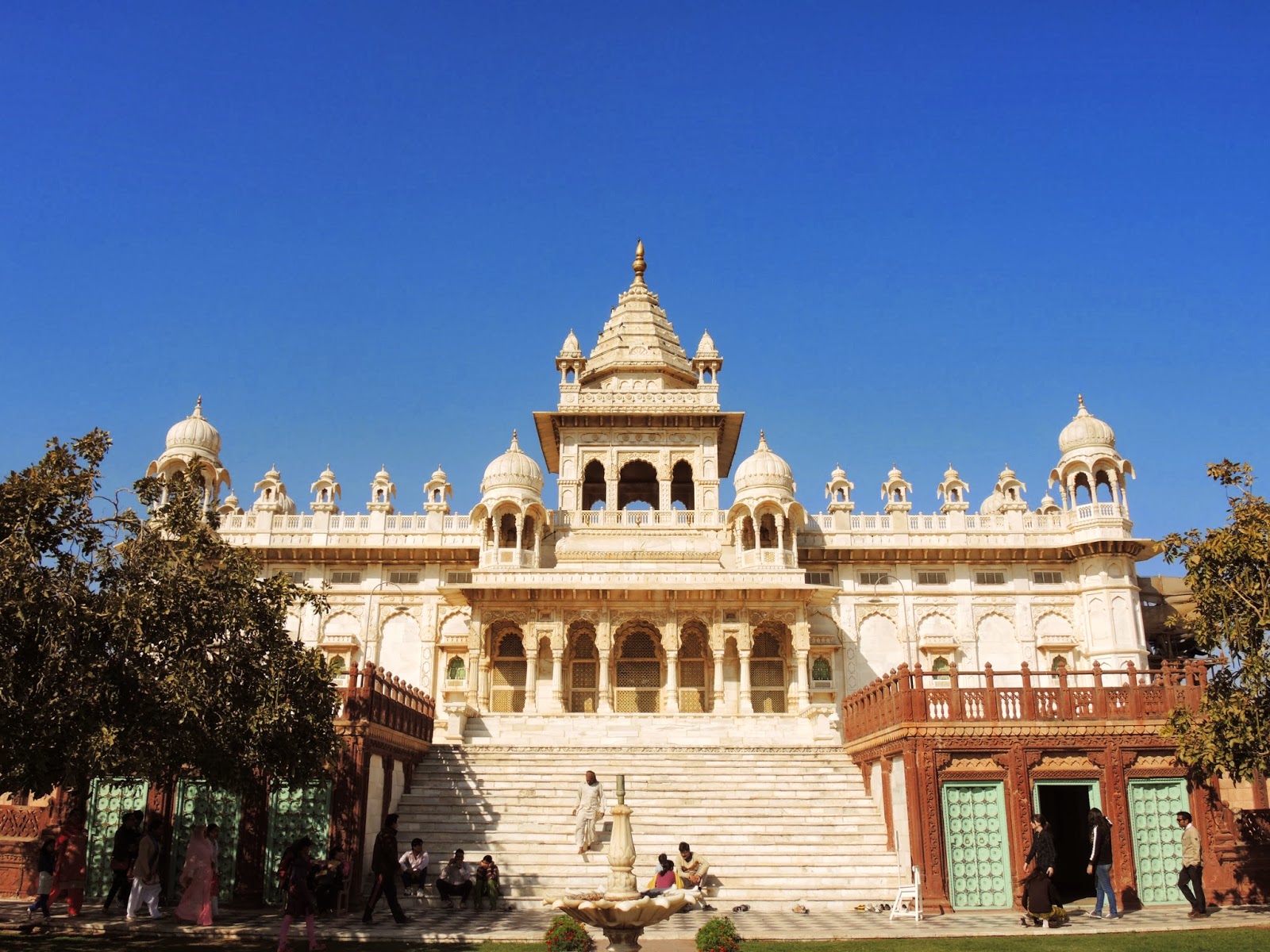 As I mentioned, we only had a day in town, but maybe that's why we loved it so much. One day, full to the brim with excellence, as opposed to maybe three days that were all quite nice. And to top it all off, we ended the day as we started it, in awe, watching the sun set over the fort on our very own rooftop restaurant. 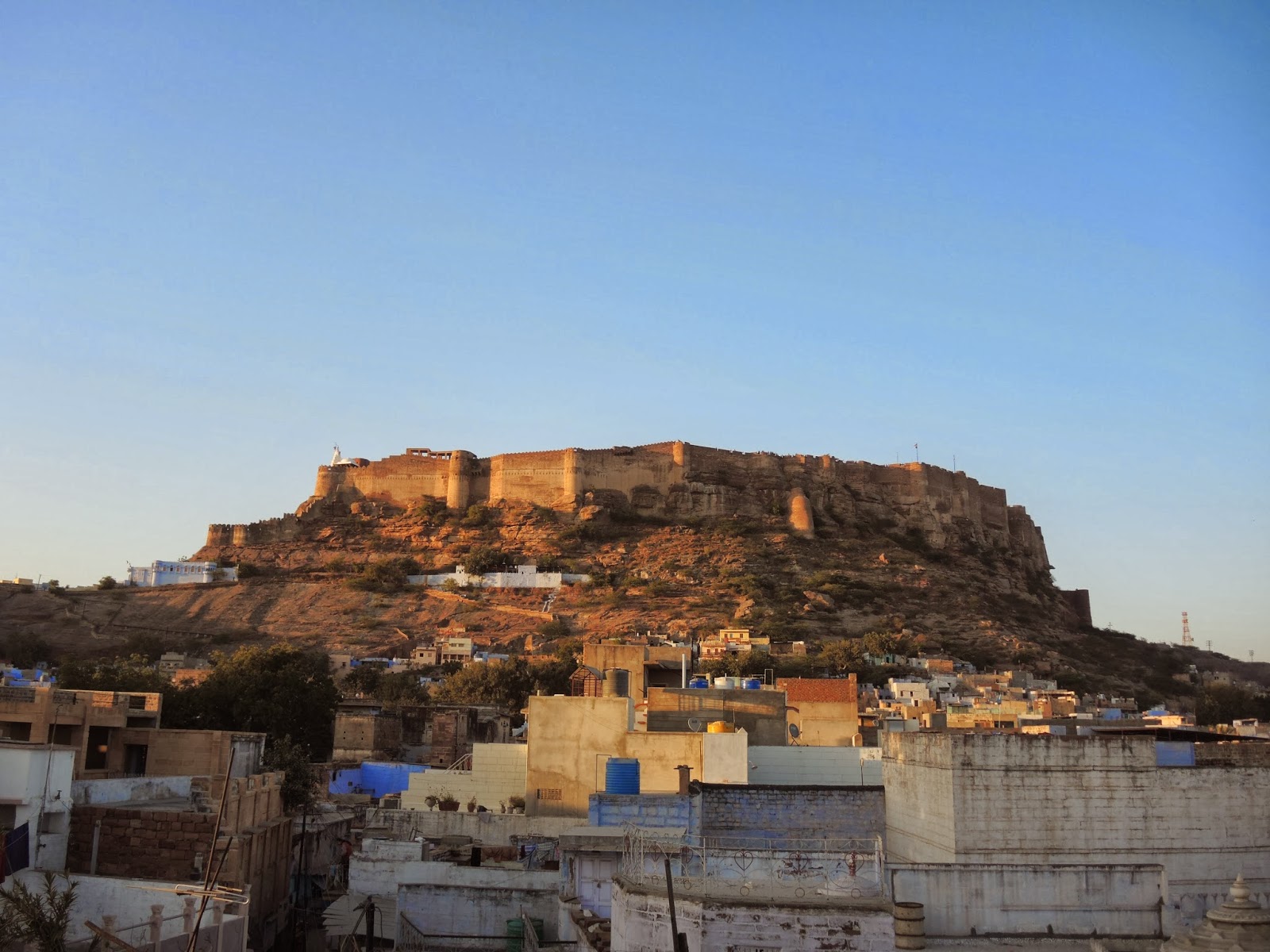 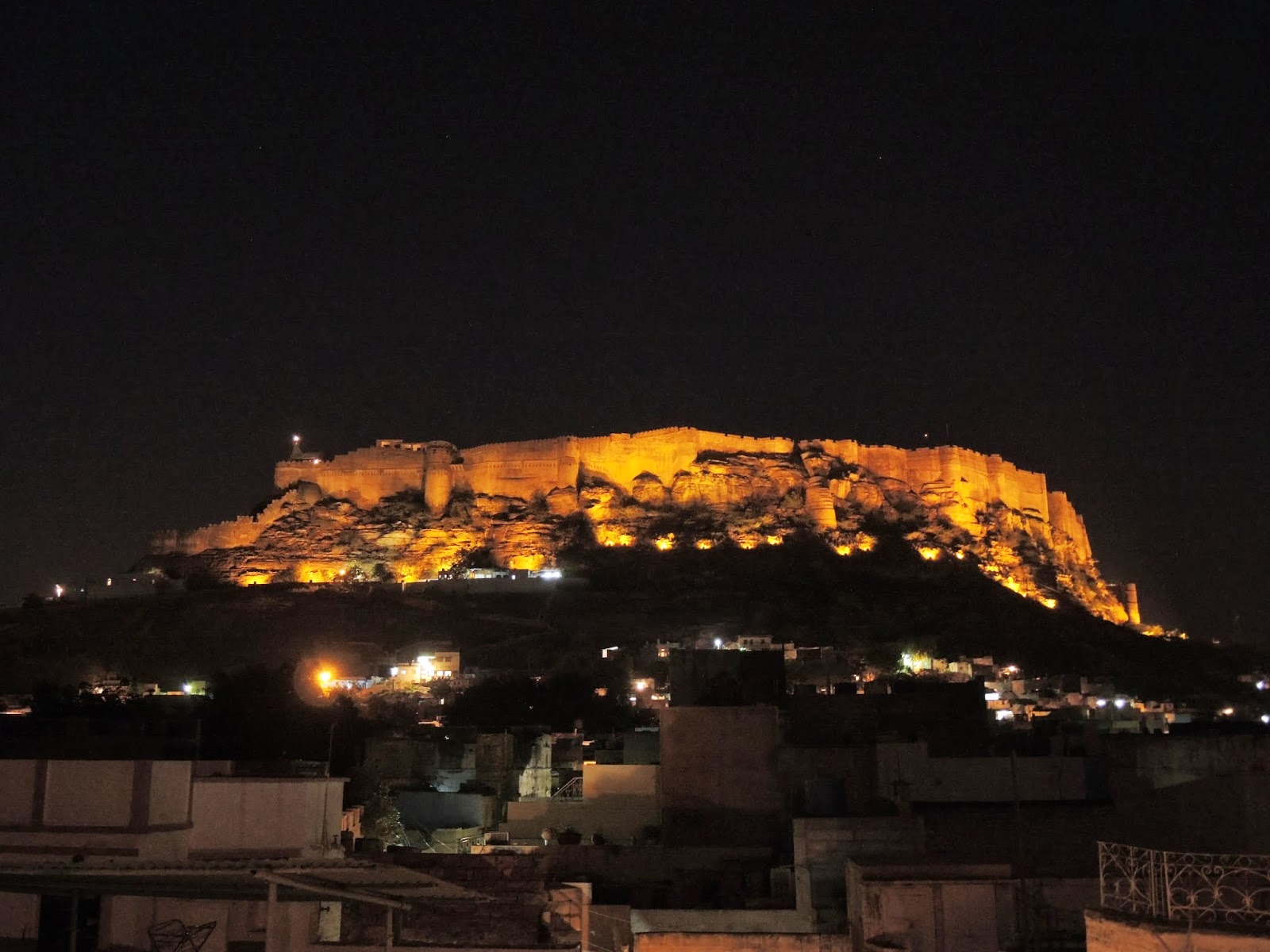 The next morning, in fact, very early the next morning, we were on the move again, and thankfully back on the rails, as we made our way to the desert city of Jaisalmer. See you then!