Give me a Jaisalmer! JAI-SALMER!
Give me a Jodhpur! JODH-PUR!
Put 'em together and what do you get?! JAI-PUR!

And just like that opening, our time here was both laboured and regretable. Even though it may be a nominal mixture of our two previous destinations, it really wasn't a patch on either, and quite frankly, let down the, otherwise flawless, province of Rajasthan. Shame on you, Jaipur! 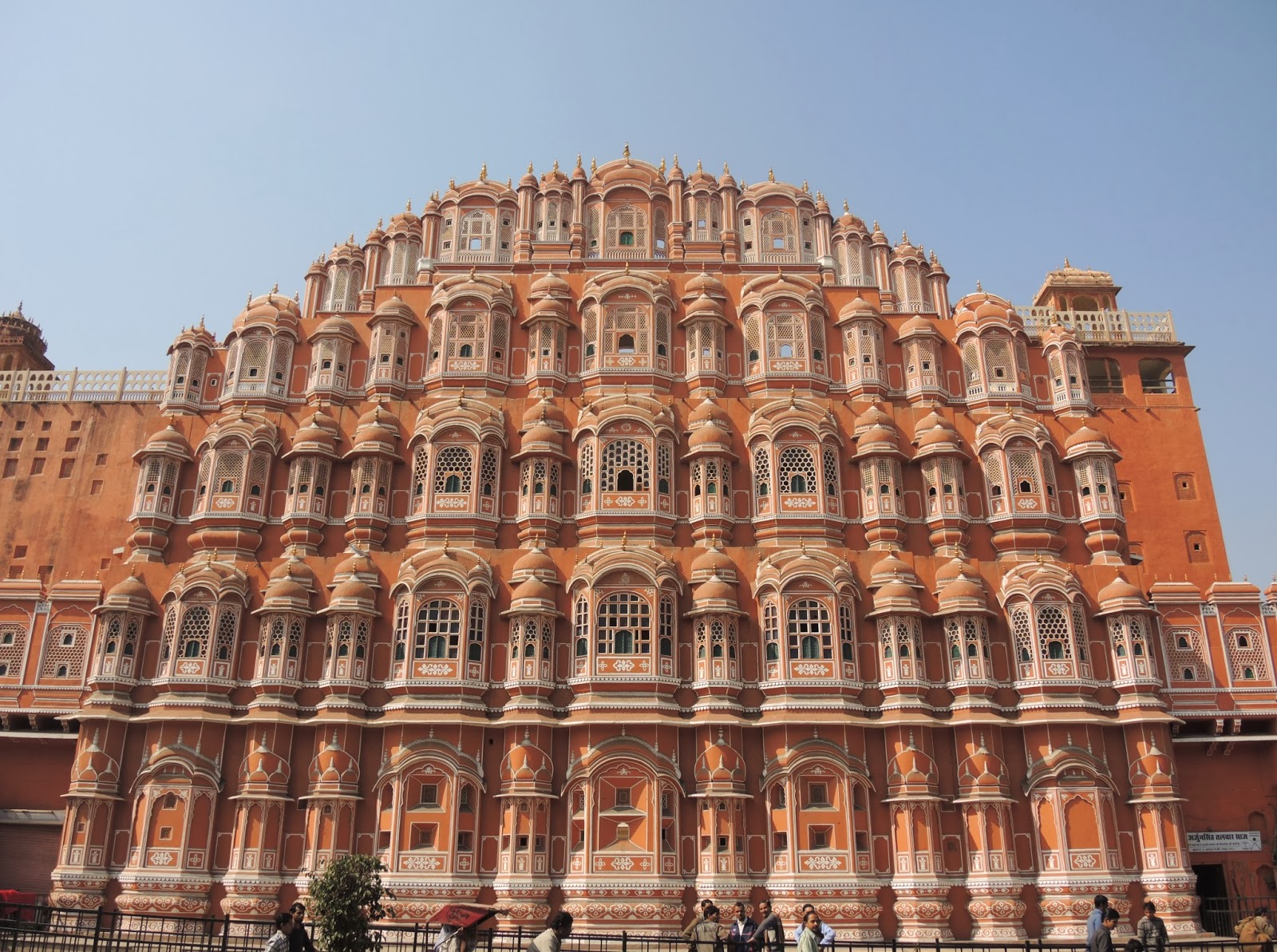 A lot of that can probably be chalked up to this being more of a big city, so it didn't really have the charm or character of some of our previous stops. It wasn't terrible, but our expectations had been rising gradually from place to place, and this was our first destination in a long time that simply failed to wow us. There were a couple of nice sights in and around India's 'Pink City' (another Rajasthani, colour-coded nickname), but on the whole, it was largely forgettable. 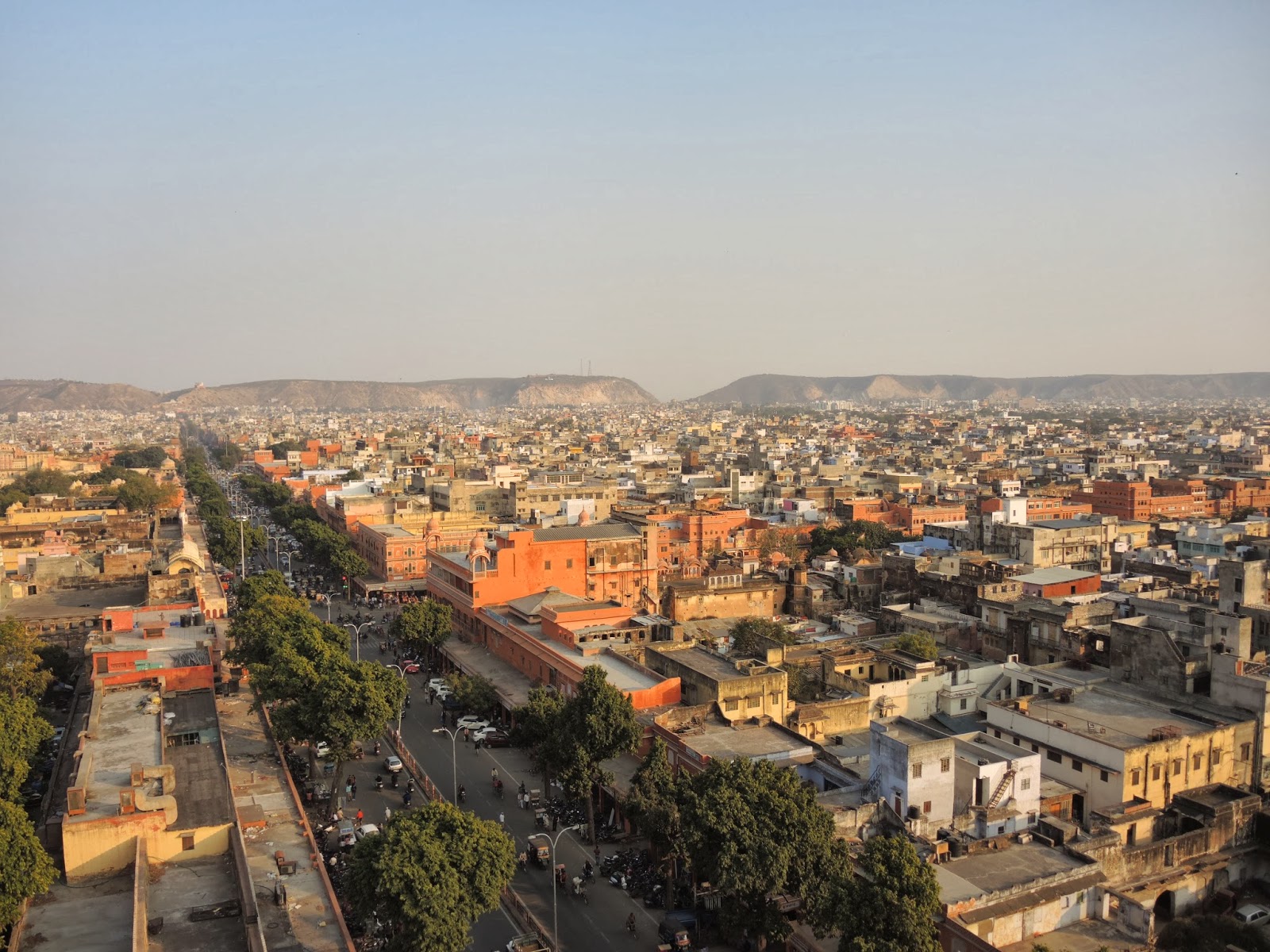 And worst of all, it wasn't even pink! Terracotta if anything. They couldn't even get that much right!

After another lovely train journey, we pulled into town at the, much-too-early, time of 4:30am, and got a rickshaw to our hotel. We had to wake someone up on at the front desk on arrival, and he grumpily checked us in, cursing us for having the gall to actually expect him to do his job. He did give us a room though, which we were glad of considering our early entrance, but that was probably just to get rid of us while he dozed off again. So, we went upstairs and everyone resumed their night's sleep.

When we rose again, we got a rickshaw into the city centre, and after a fruitless search for a nice restaurant, we had to opt for a meatless one instead. In fact, most restaurants that we've encountered in Rajasthan have been vegetarian, much to our disappointment, though this one was actually lovely! (LMB - nicest restaurant in town). We also slightly plunged ourselves into the unknown and ordered Kulfa - a traditional Indian dessert, and it was actually one of the nicest dishes we had on the entire trip! 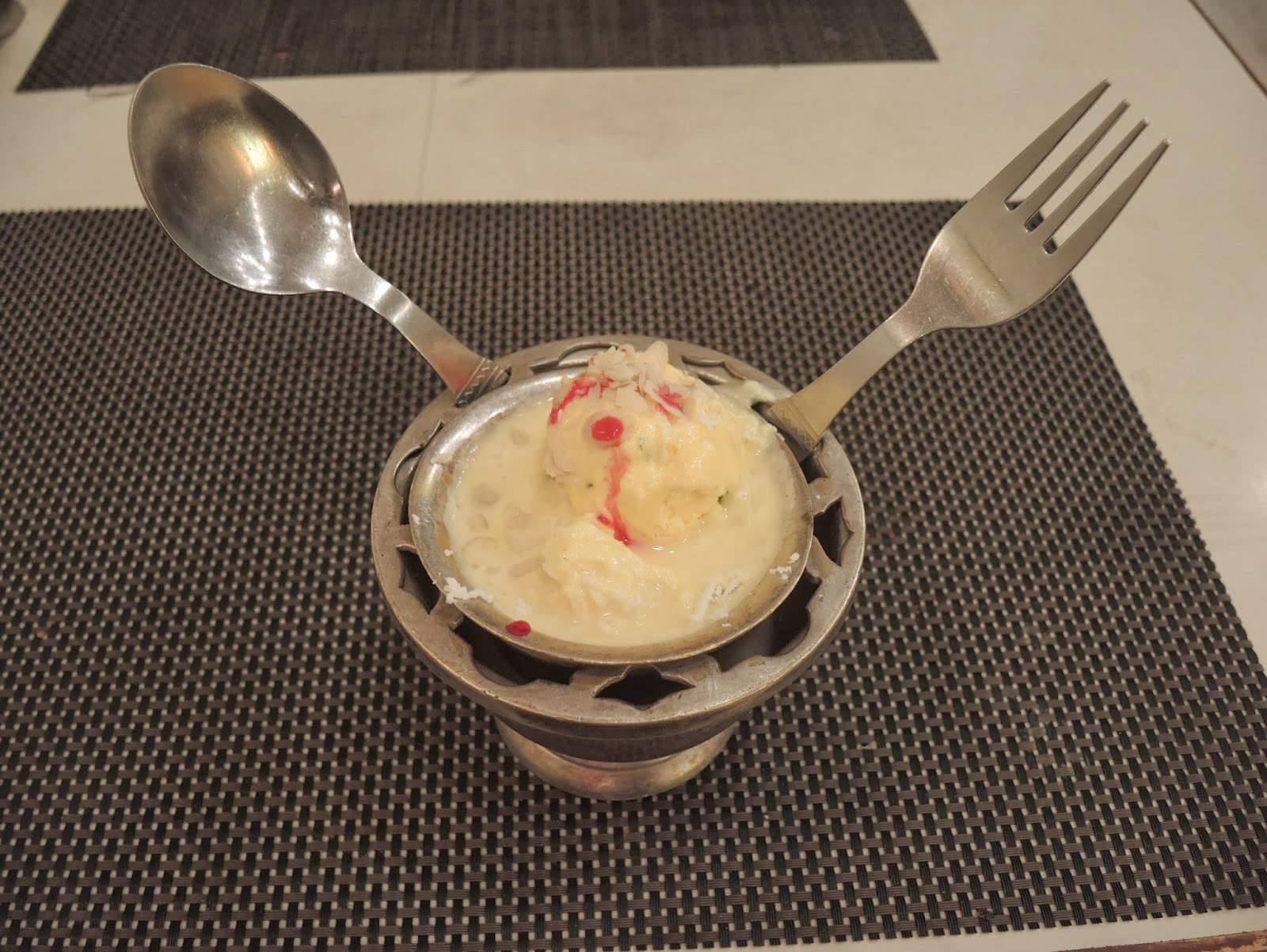 It's like ice-cream but more dense, and infused with saffron and other such exotic sounding things.

The staff were also great and one of the waiters even showed us how to use the after dinner refreshments that you get with the bill. We've seen this in a few places and even in our local Indian restaurant in Hong Kong, but never understood what it was. It just looked like a bunch of herbs and salt. Do you sniff it, rub it on yourself, what? 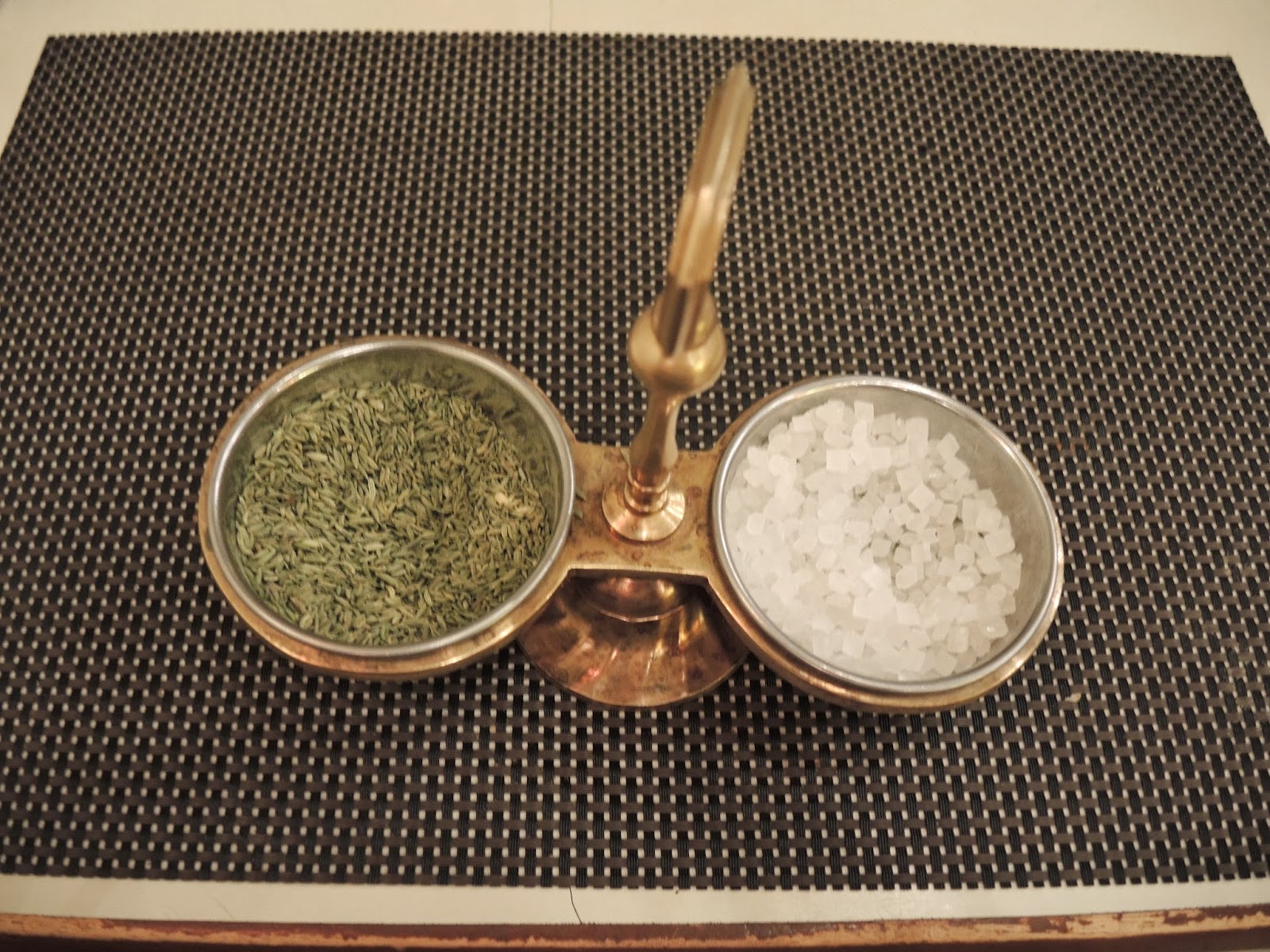 But we were instructed to take a small handful of the two mixed together and just lob it in your gob. And, it was great! Just like a blackjack bar!

After lunch, we visited a few of Jaipur's main attractions, including the Hawa Mahal (as seen in the first photo) and, the delightfully named, Jantar Mantar (just say it out loud, it’s really fun!). 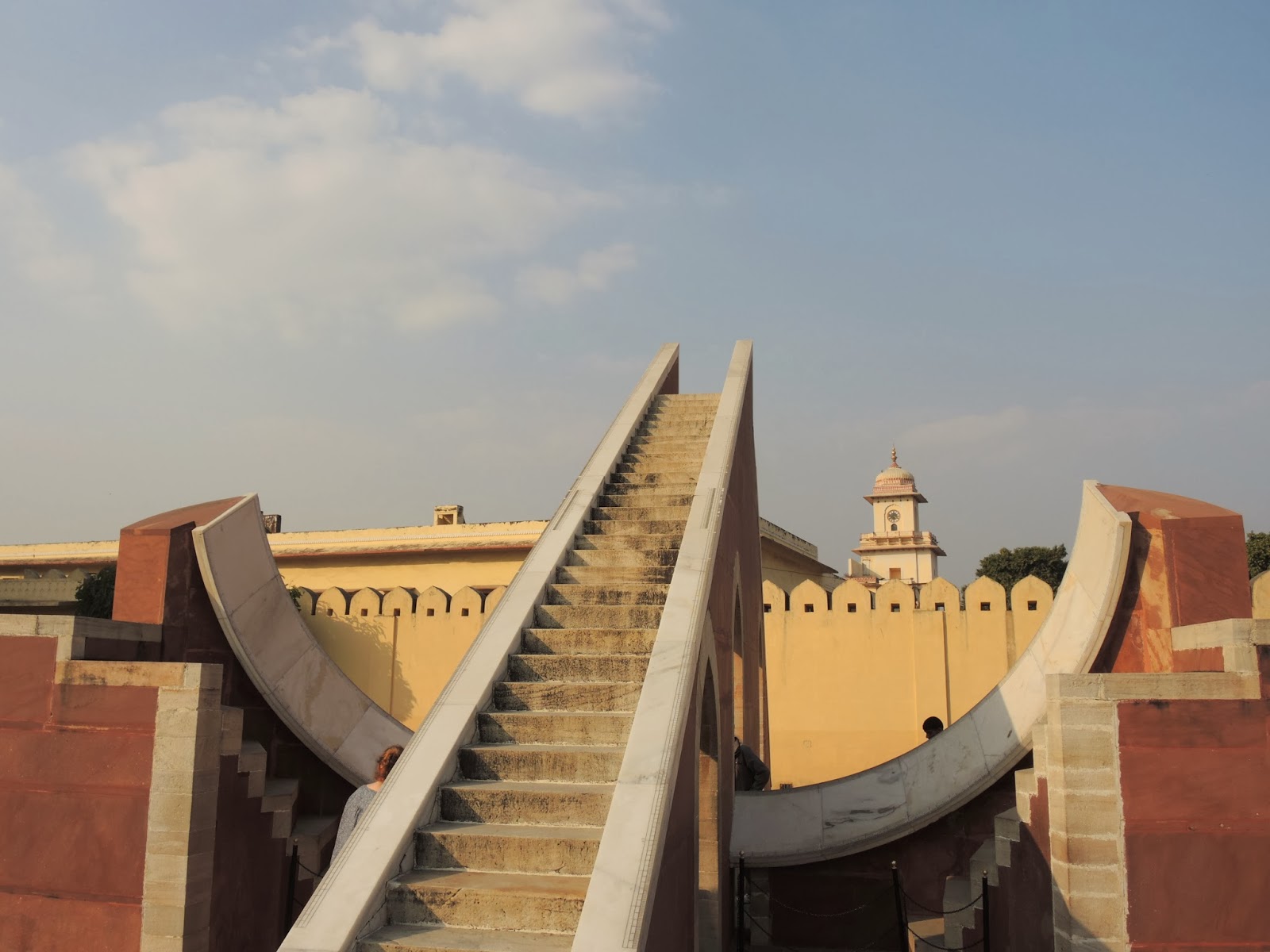 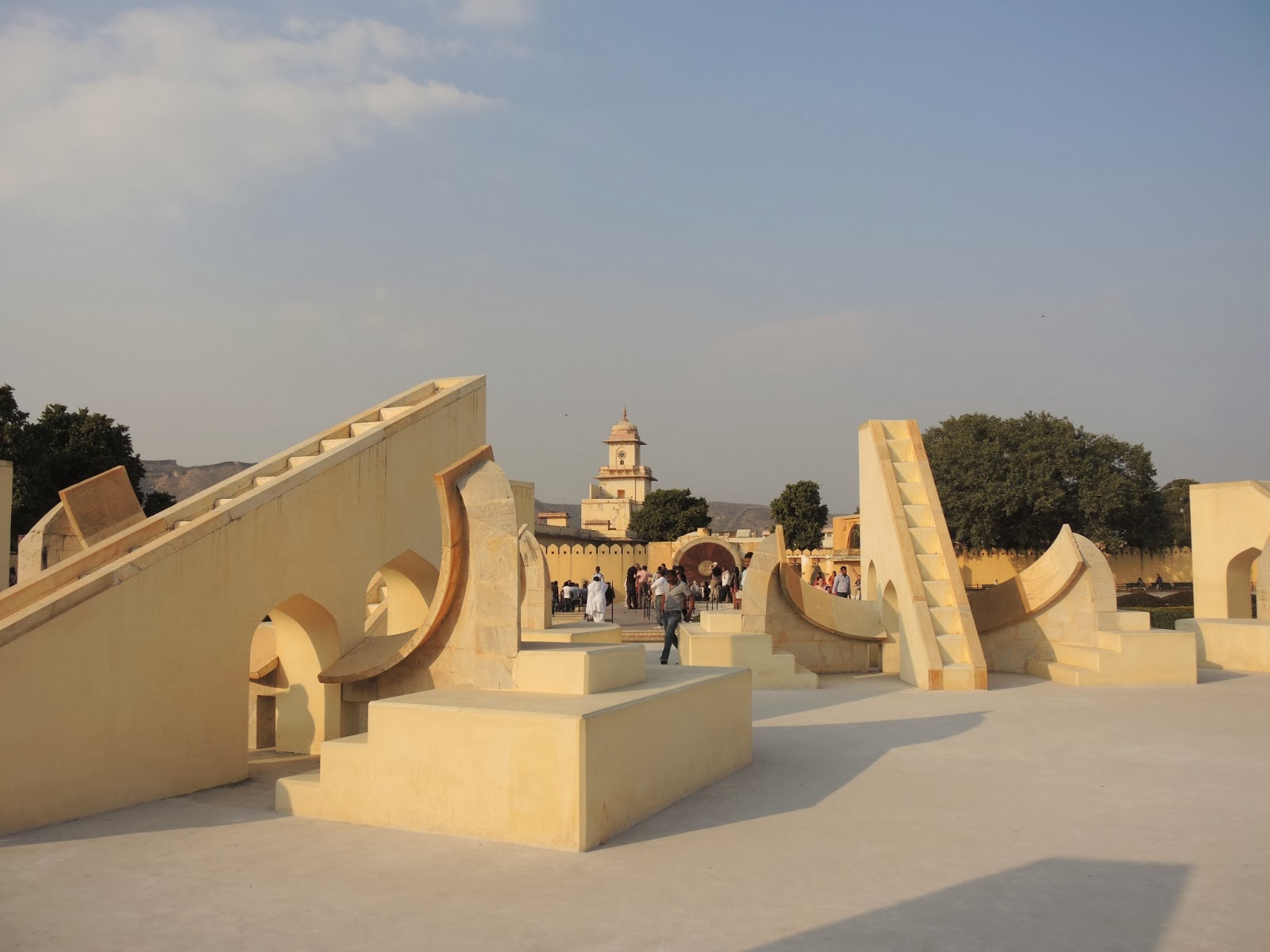 And not just a bunch of random, stairways to nowhere either! Built in the early 18th century, it's actually a highly precise, astronomical observatory, with various instruments and devices to measure and survey things like constellations, planetary orbits and other such phenomena that are equally out-of-this-world. It's also home to the world's largest sundial which is accurate to an incredible two seconds!

Later that afternoon, we also visited Iswari Minar Swarga Sal, also known as the, much catchier, Heaven Piercing Minaret. In fact, I can tell you exactly what time we got there - it was 4:36pm, (it closes at 4:30pm and the guard was just locking up when we arrived). But we slipped him a sneaky 50 Rupees and he let us in for 10 minutes to see the view from the top. 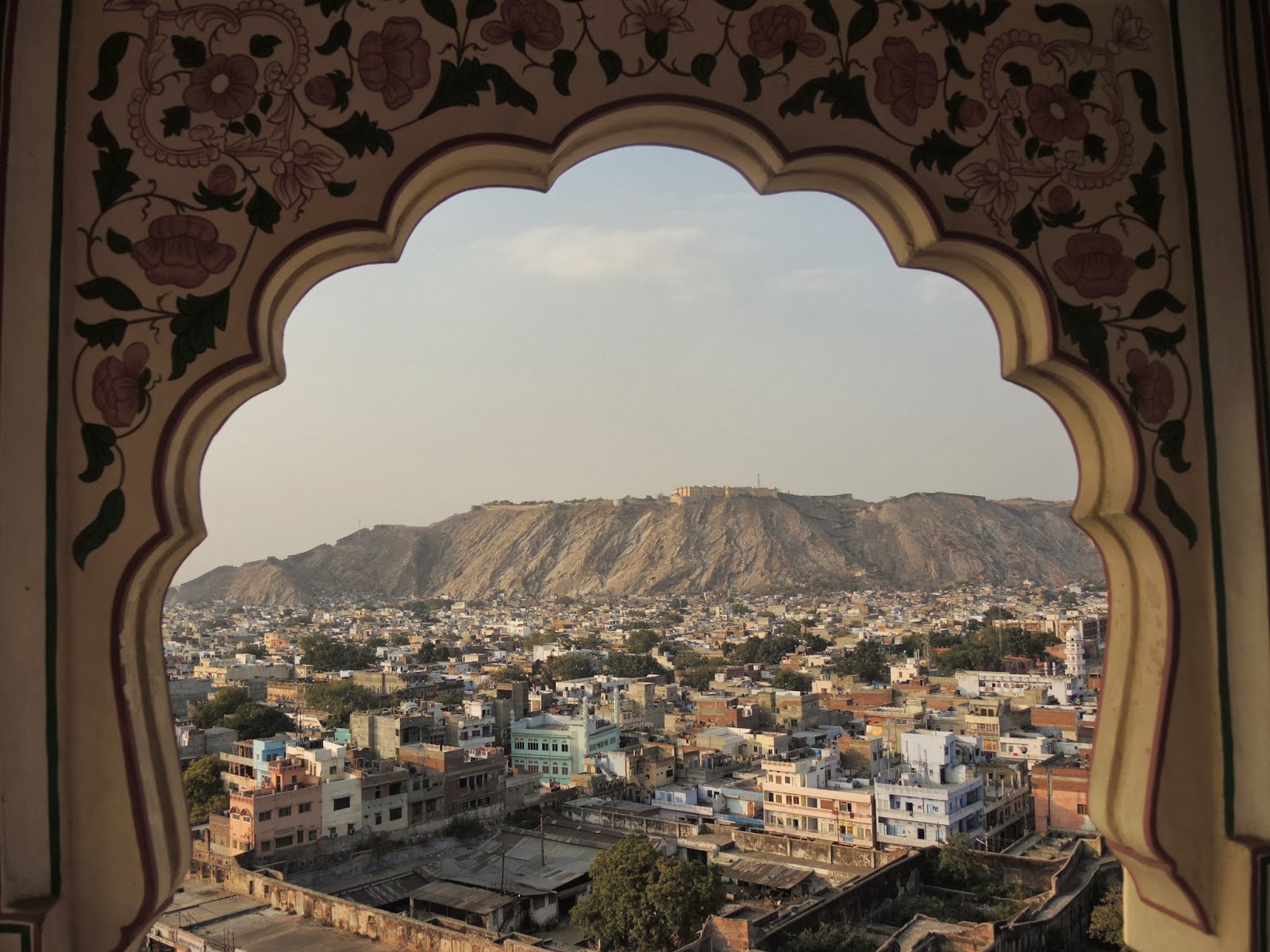 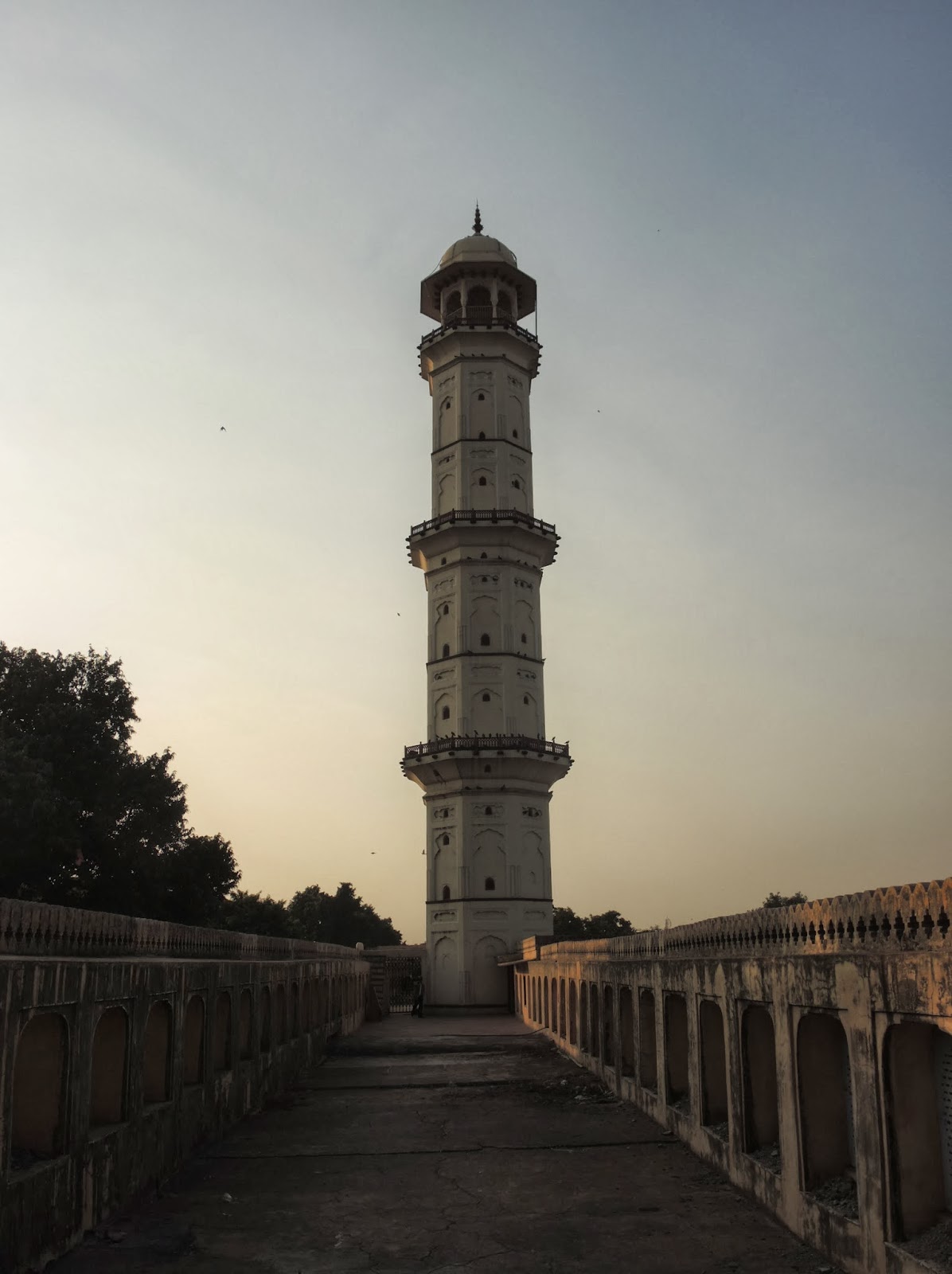 There are, of course, a lot of downsides to things not working as they should in India, but I guess there are some upsides too. After all, if this was Germany, we would never have reached the top of that tower!

On our final day, we went on a small day trip to Amber Fort which, strangely out of sync with the rest of Rajasthan, actually isn't named for its colour, but rather because it's located in the town of Amber. And the funny thing is, Amber Fort is in fact amber! A lot more so than Jaipur is pink anyway... 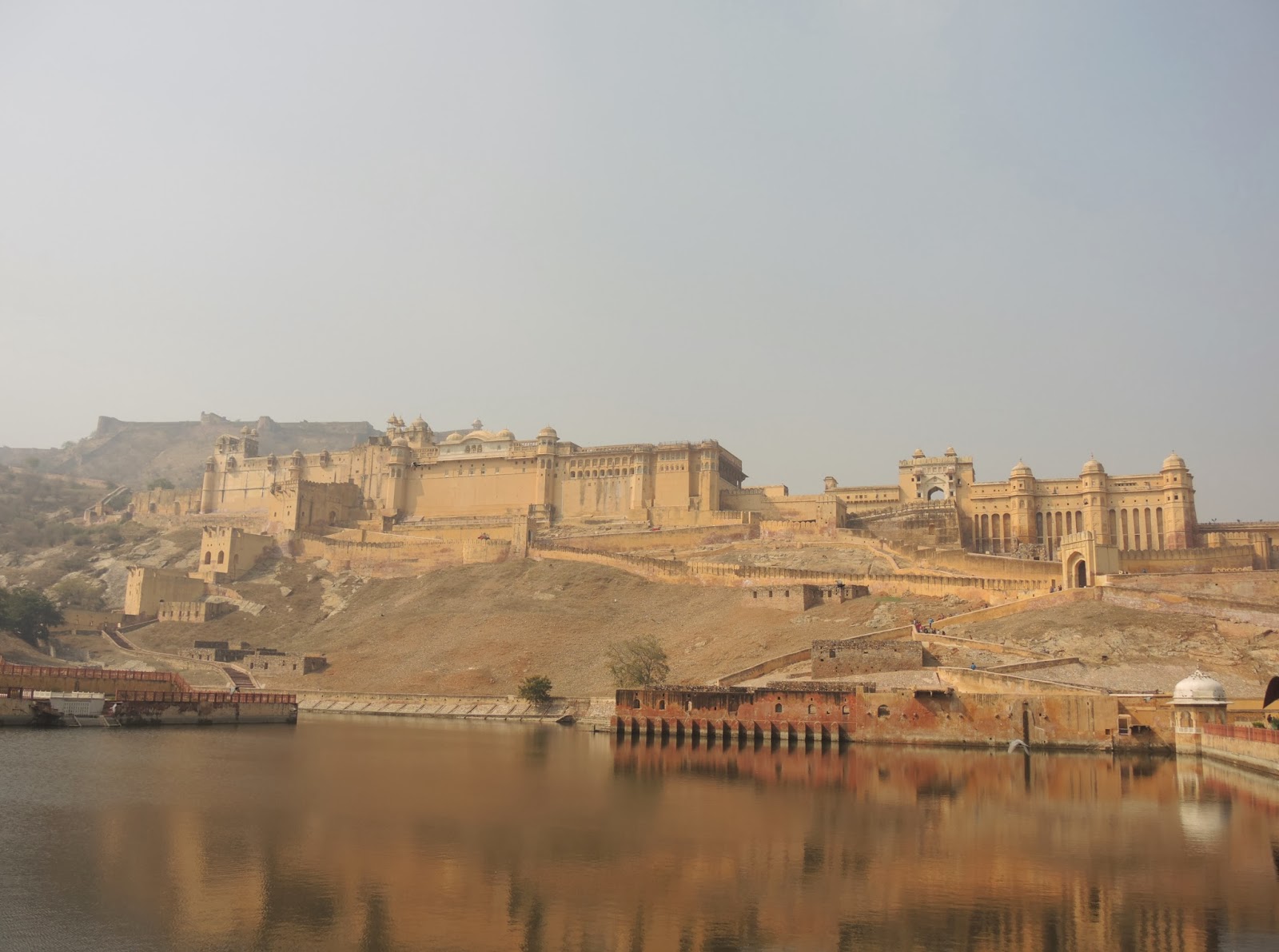 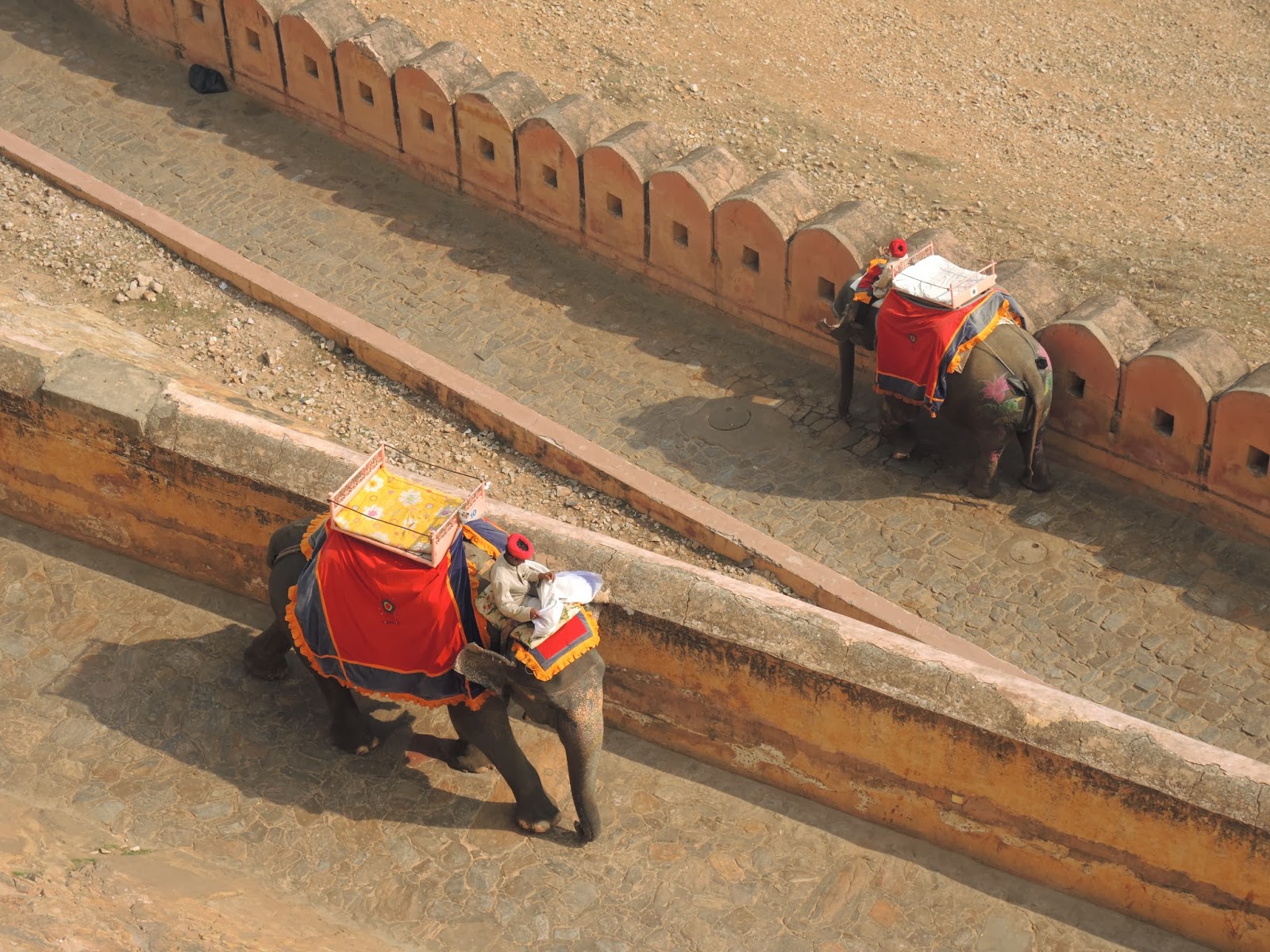 This was billed as one of the top forts in the whole of India (and we had seen a lot at this stage!), but being honest, it wasn't really all that. Maybe the problem was we had seen so many and had reached maximum capacity, but trying to look at things objectively, I'm still leaning towards mediocrity. It was big, but that's about all it had going for it, and (as Aisling reassures me) size isn't everything anyway...

We also walked up (via an underground and overground passageway) to Jaigarh Fort which sits on a hilltop overlooking Amber Fort. It's certainly not as nice as the latter, but it does have better views, so worth a visit in its own right. It was also the scene of our latest video diary:

And that was the end of our, mostly unmemorable, time in Jaipur. The next morning we boarded our first ever seated train in India, for the short ride to Agra. (I already posted the photo to Facebook of our visit to the Taj Mahal, so there's that surprise ruined! If you read this blog for the suspense, then I'm sure you'll be sorely disappointed...).
Posted by Mark O'Leary at 2:14 AM