Varanasi was absolutely nuts! It was just so different to anything we've seen before, and had more character and uniqueness than you could shake a stick at! Not only is it considered the holiest city in Hinduism and Jainism, but it is also one of the oldest cities in the world. It's one of those places where there aren't really many sights to speak of, you just have to throw yourself into the mix of everyday life, absorb it all and hope you come out the other side in one piece. 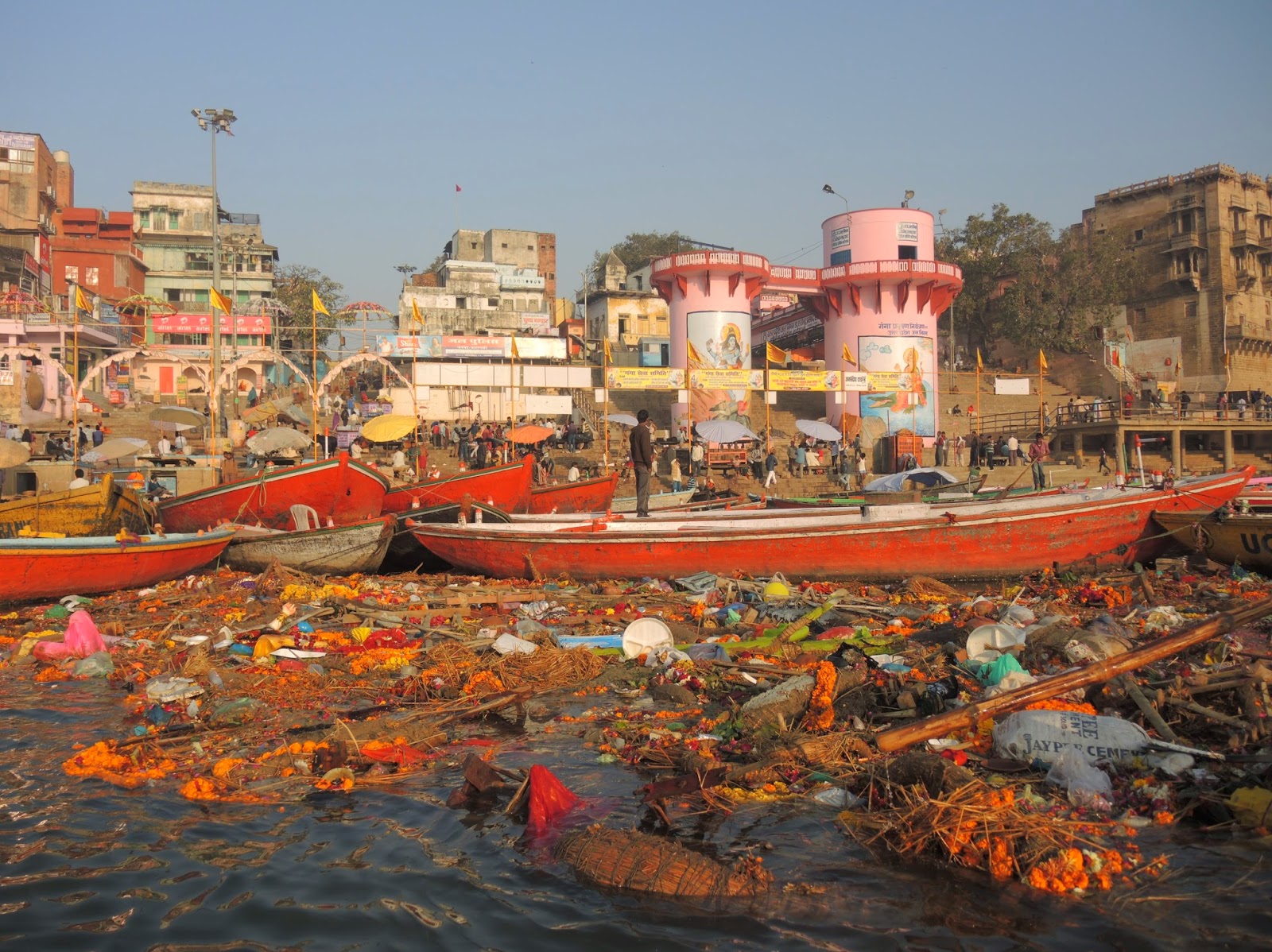 Originally, we were meant to arrive at 8:30am with a full day in Varanasi ahead of us, but as it turned out, we eventually pulled into town at 6pm, with a full day on the train behind us, which kinda derailed our plans a bit. We had only scheduled two and a bit days here in total and that was one gone already. Still, we had been very lucky in our time in India up til now, and our tight schedule had proved to be quite robust, so we were due a day of uncertainty.

After arriving in town, we got a tuk-tuk from the station towards the banks of the Ganges, but because of the layout of the city, there's only so far you can go before you have to make your way on foot. It gave us a truly authentic introduction to what Varanasi was all about though, as we made our way through the busy streets and down intricate alleyways, amidst a seemingly endless stream of funeral processions. This was no sombre affair however, in fact, you've never seen a celebration like it! People come from all over to cremate their bereaved here, so death is very much a part of everyday life. 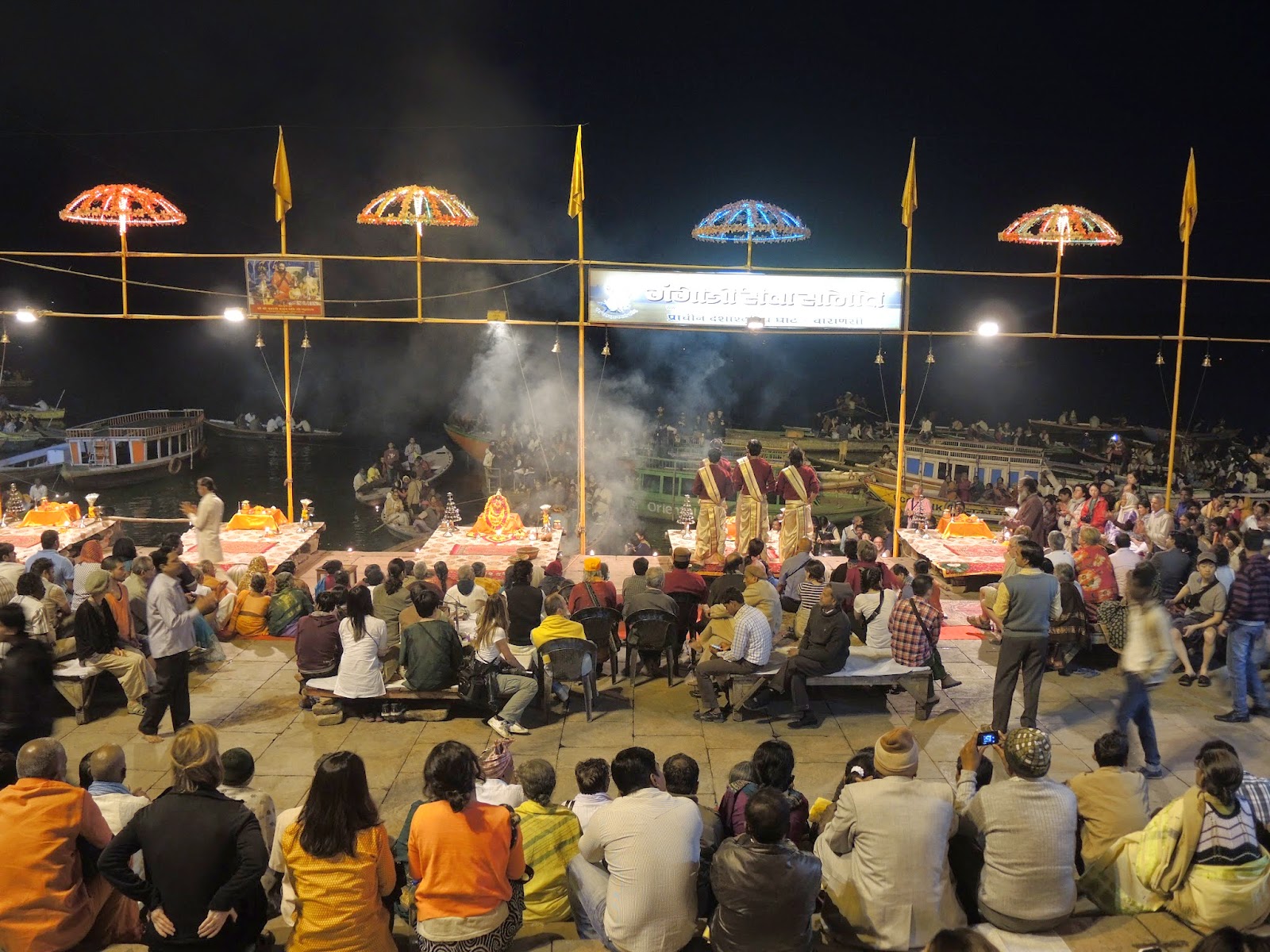 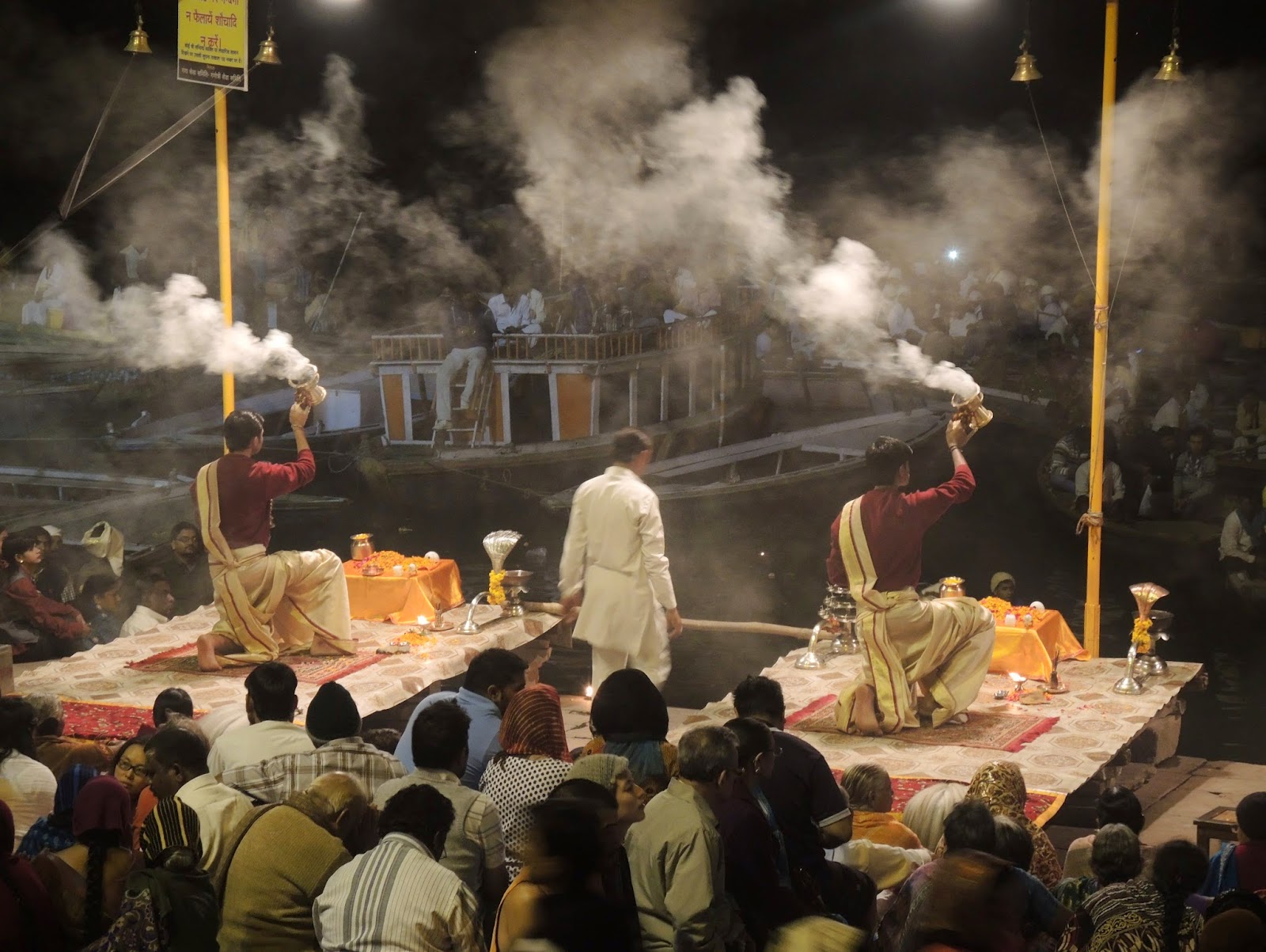 Looking back now on our first night in town - as we wandered aimlessly around looking for our guesthouse, sweaty and disheveled, and bumbling through a series of processions - we were actually walking through someone's funeral! I think it would be generally frowned upon if a couple of Indian backpackers did the same thing at an Irish burial...

Even though we had one day less than we had planned here, we still made the most of things, getting up at dawn the following morning for a sunrise boat ride on the Ganges. 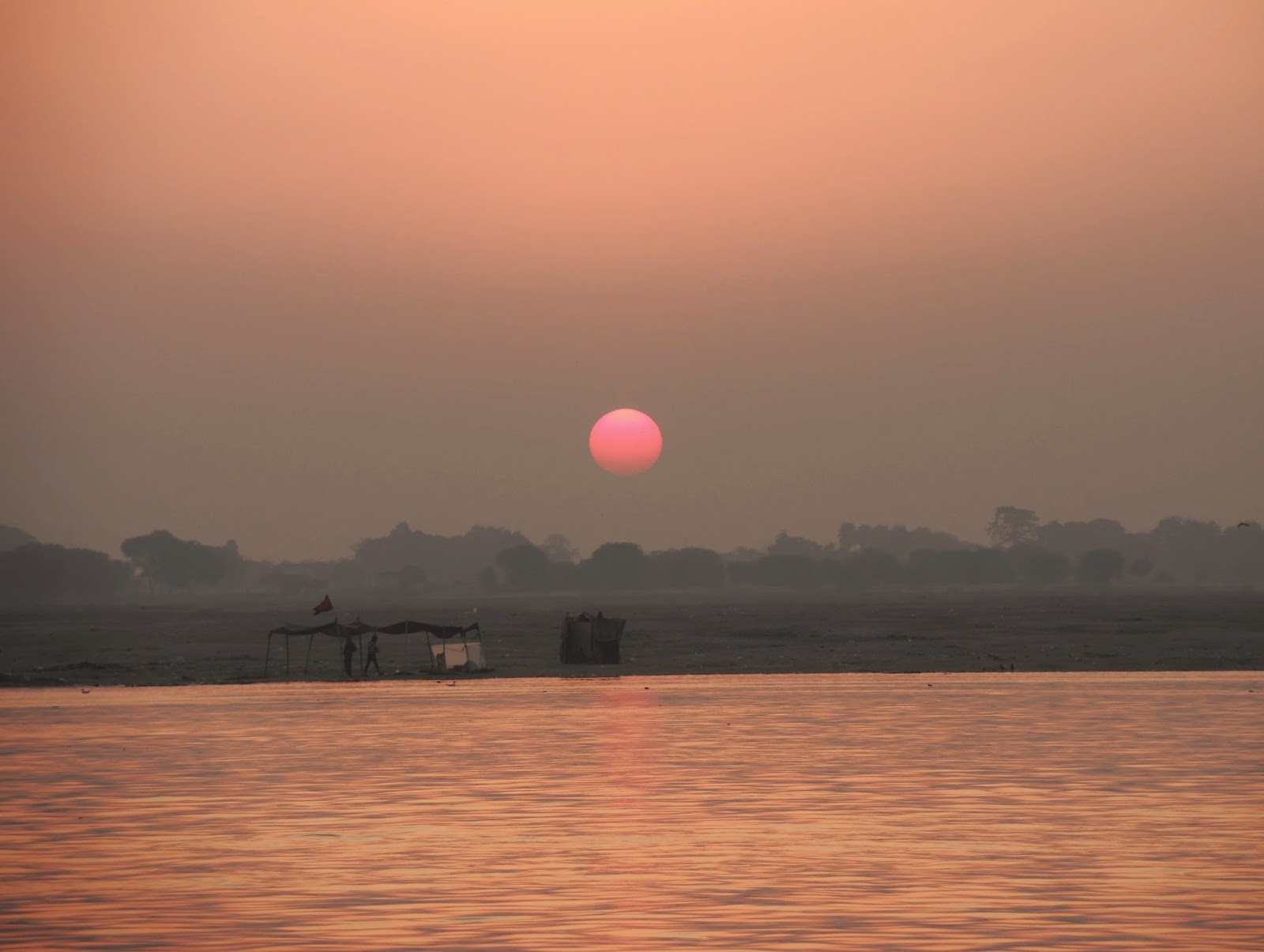 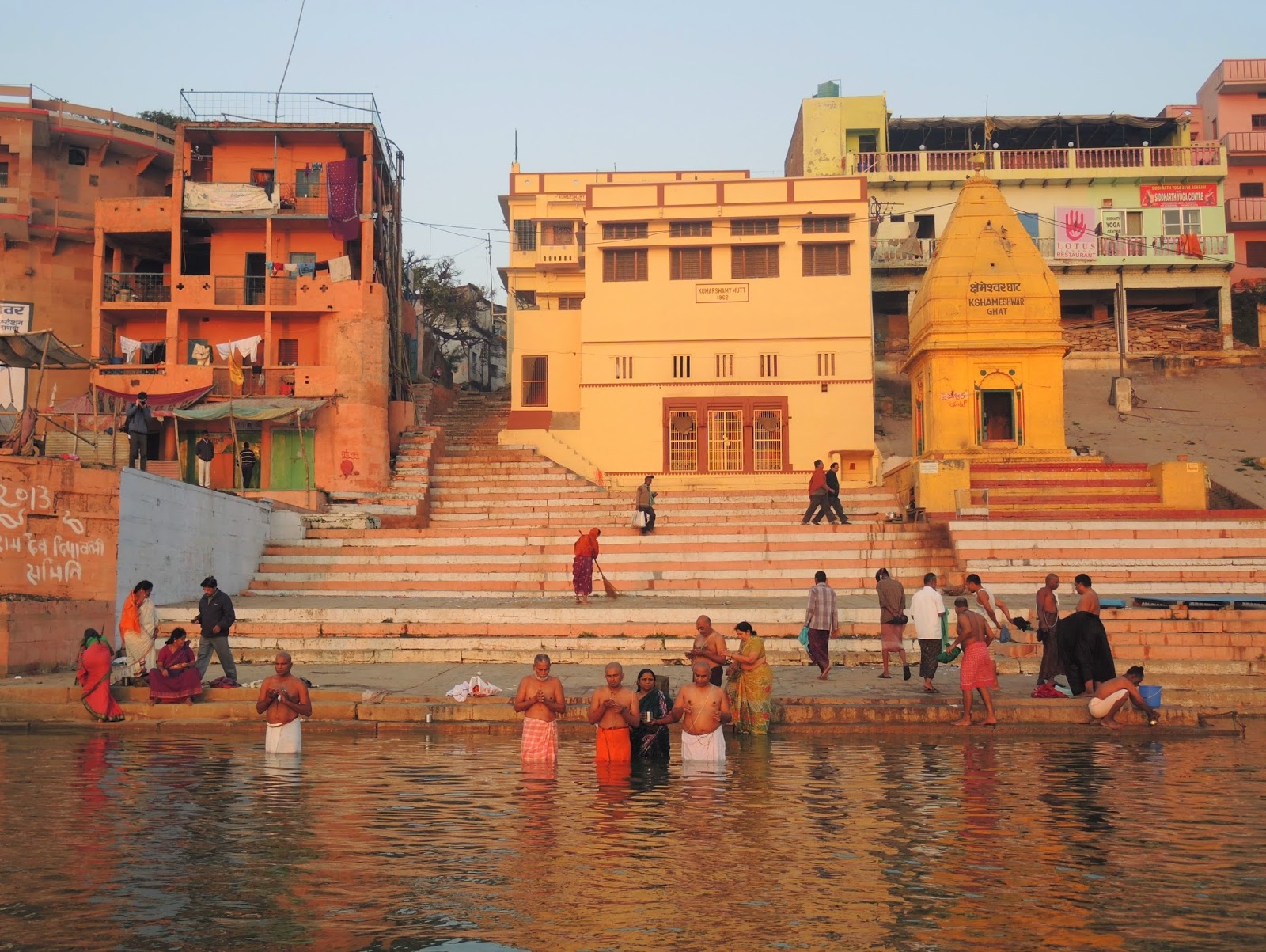 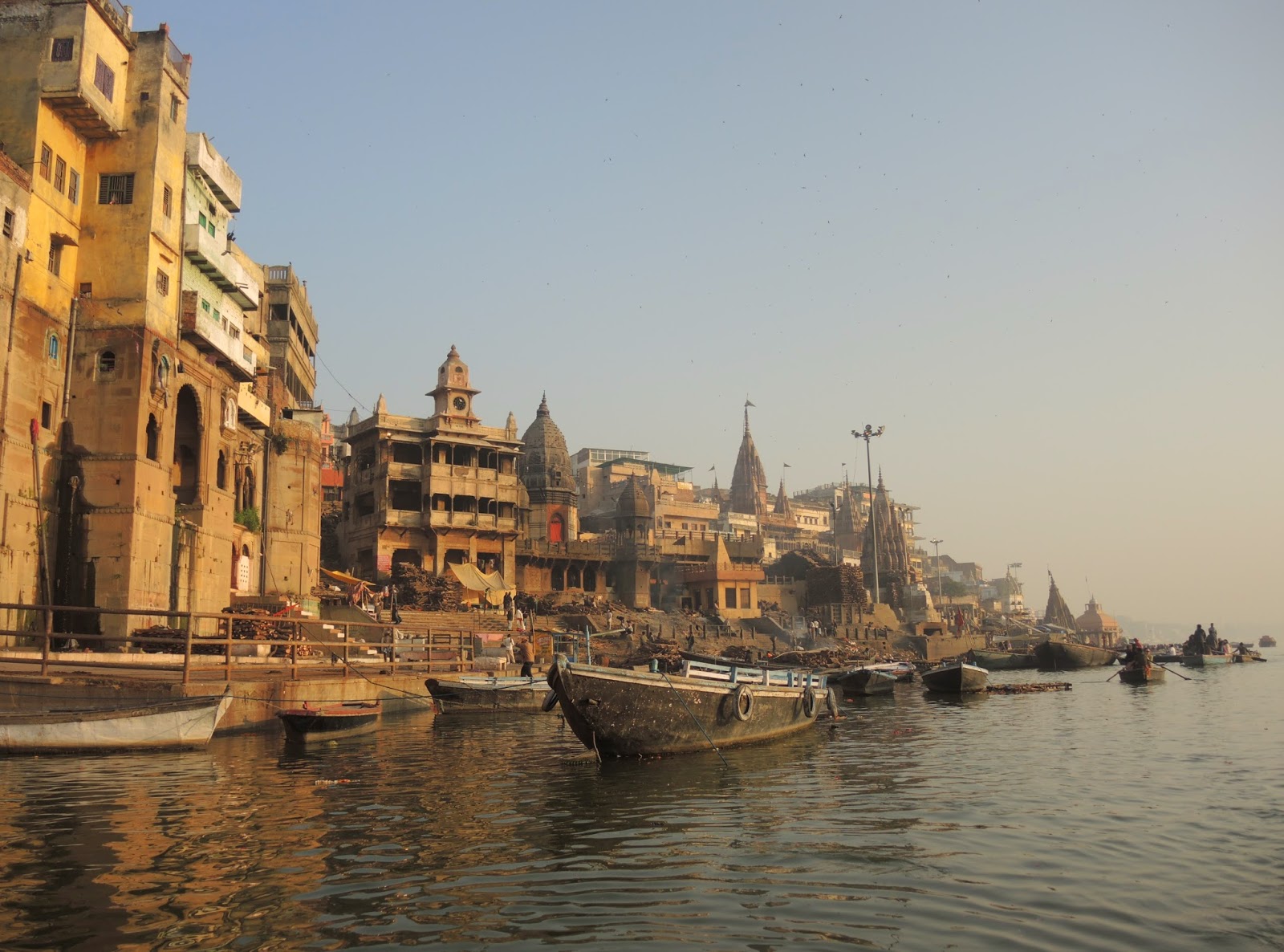 We've been on a fair few boat tours in our time, but nowhere else in the world will you get such an uncensored view of humanity and such an insight into daily life. They use the Ganges here for everything a river could possibly be used for (and even a few things it should never be used for!). From scattering the ashes of the deceased, to washing your laundry; taking a bath or just a spiritual cleanse, the Ganges has got it all! 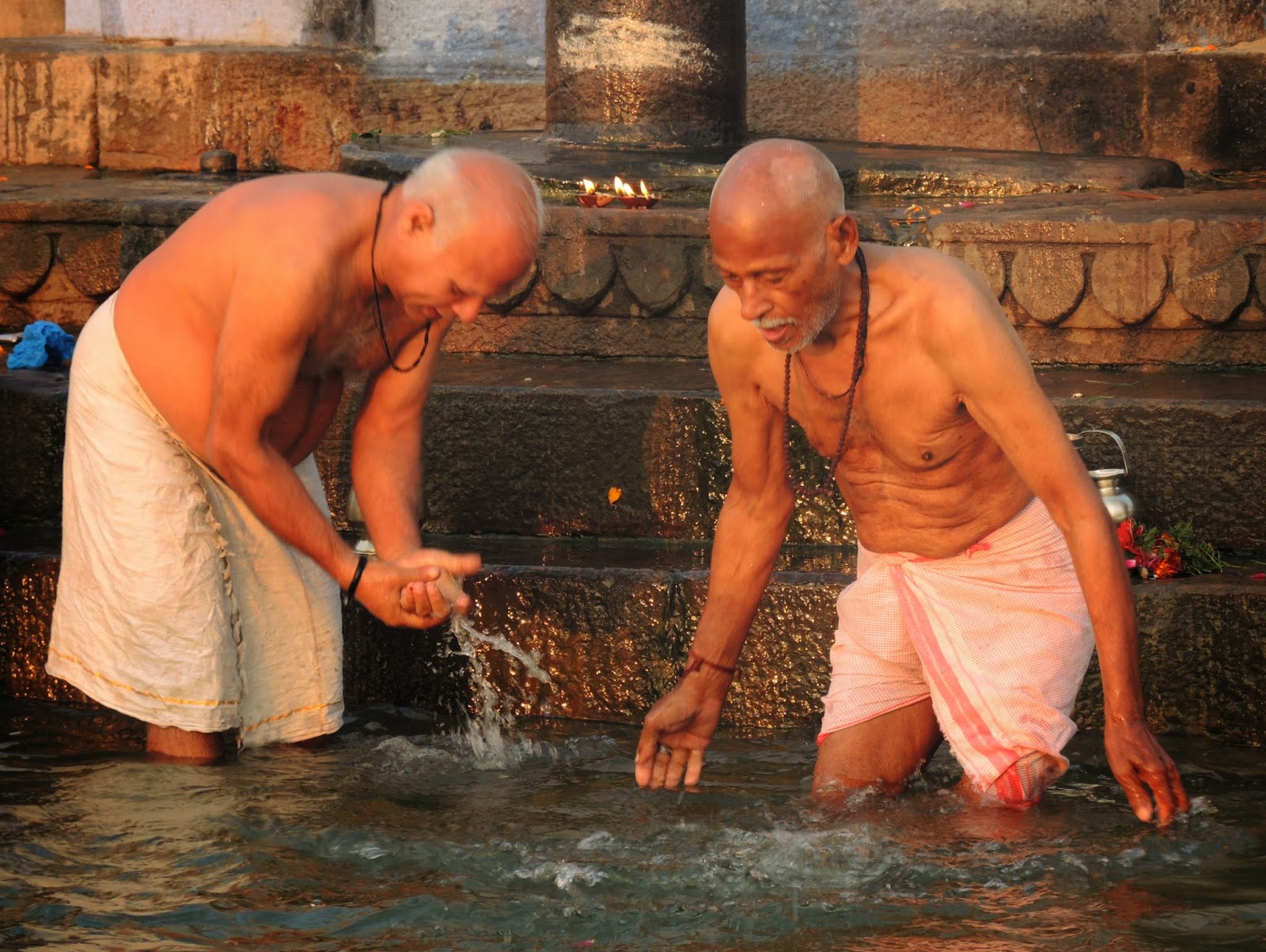 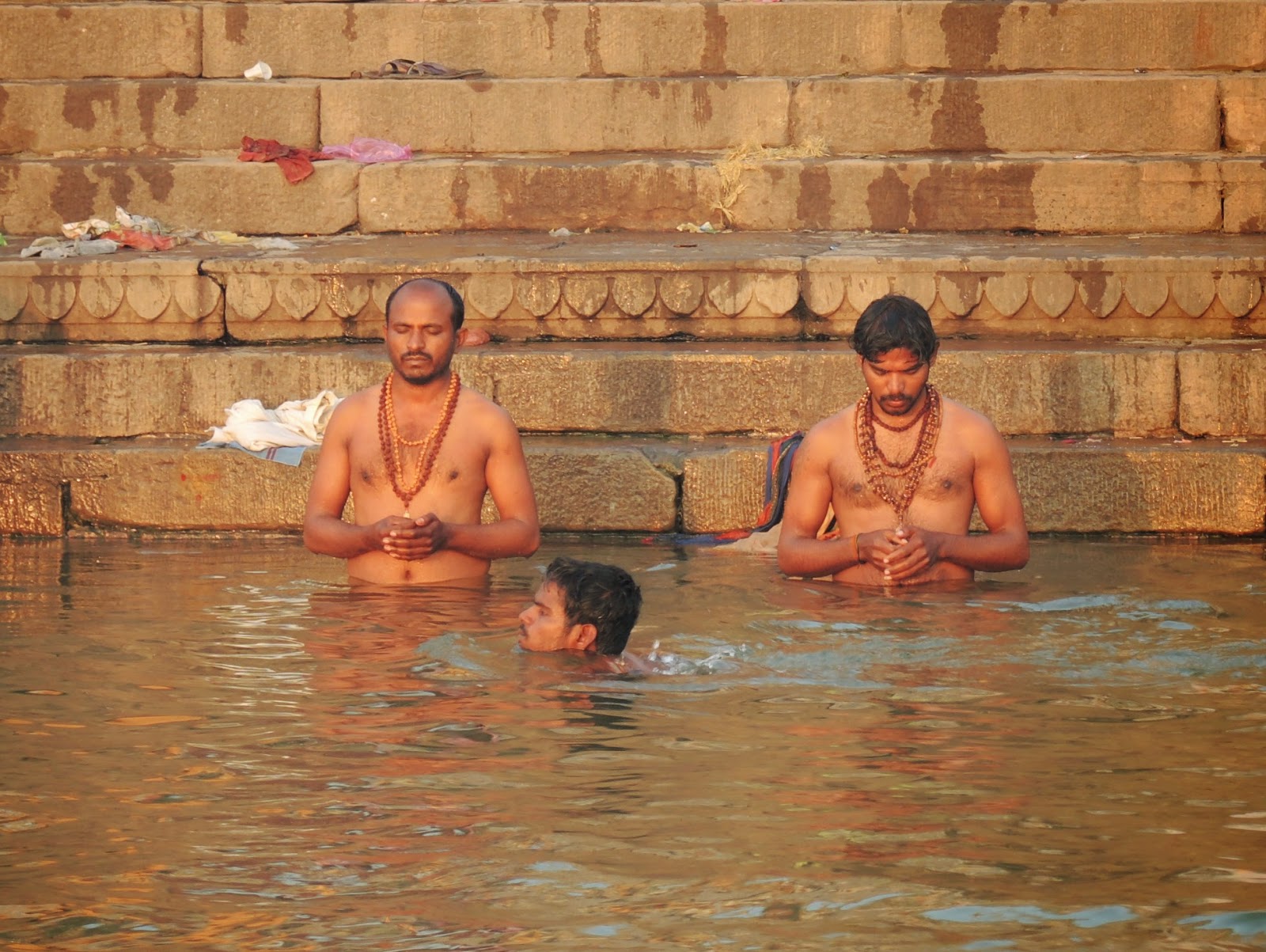 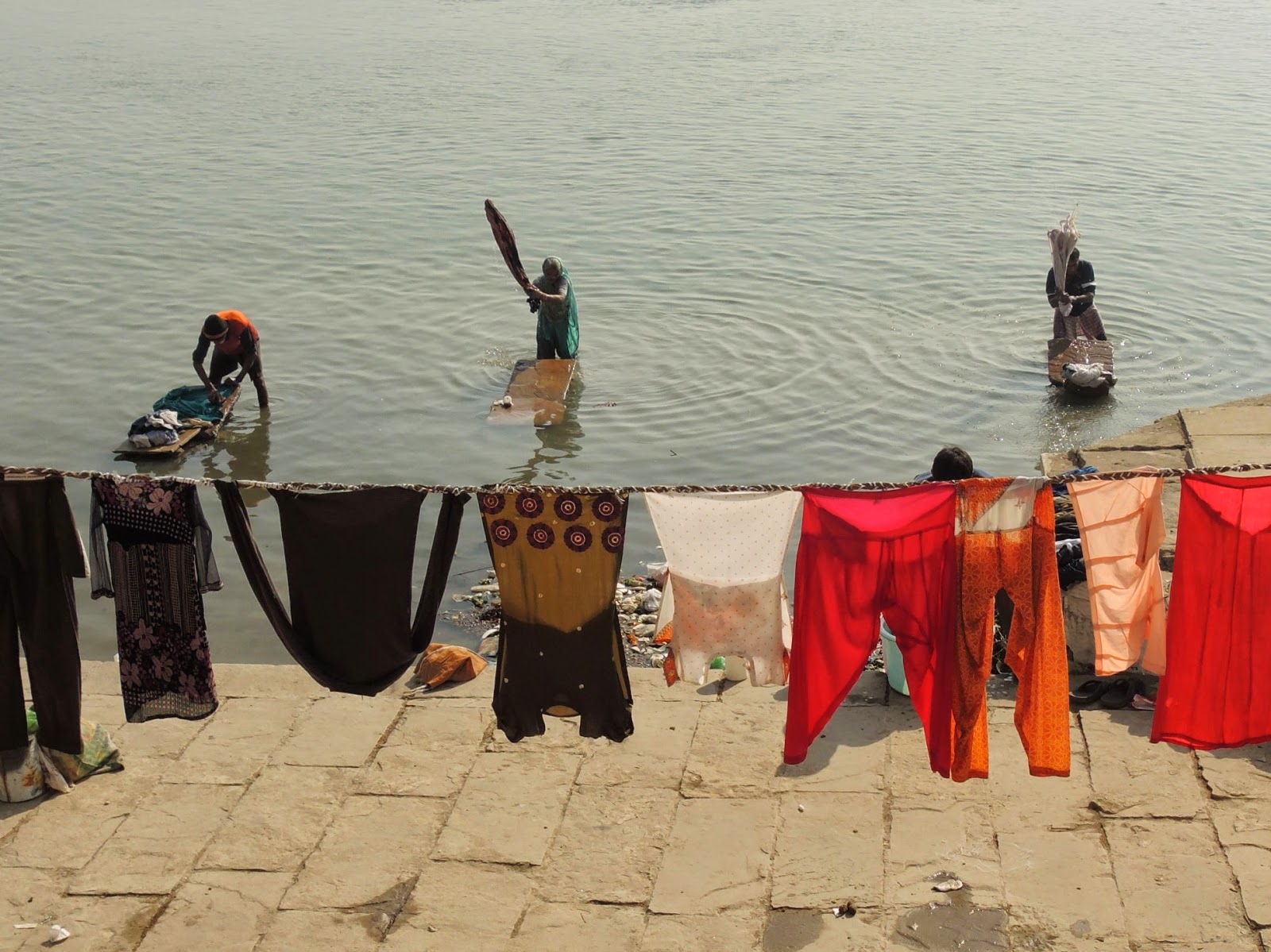 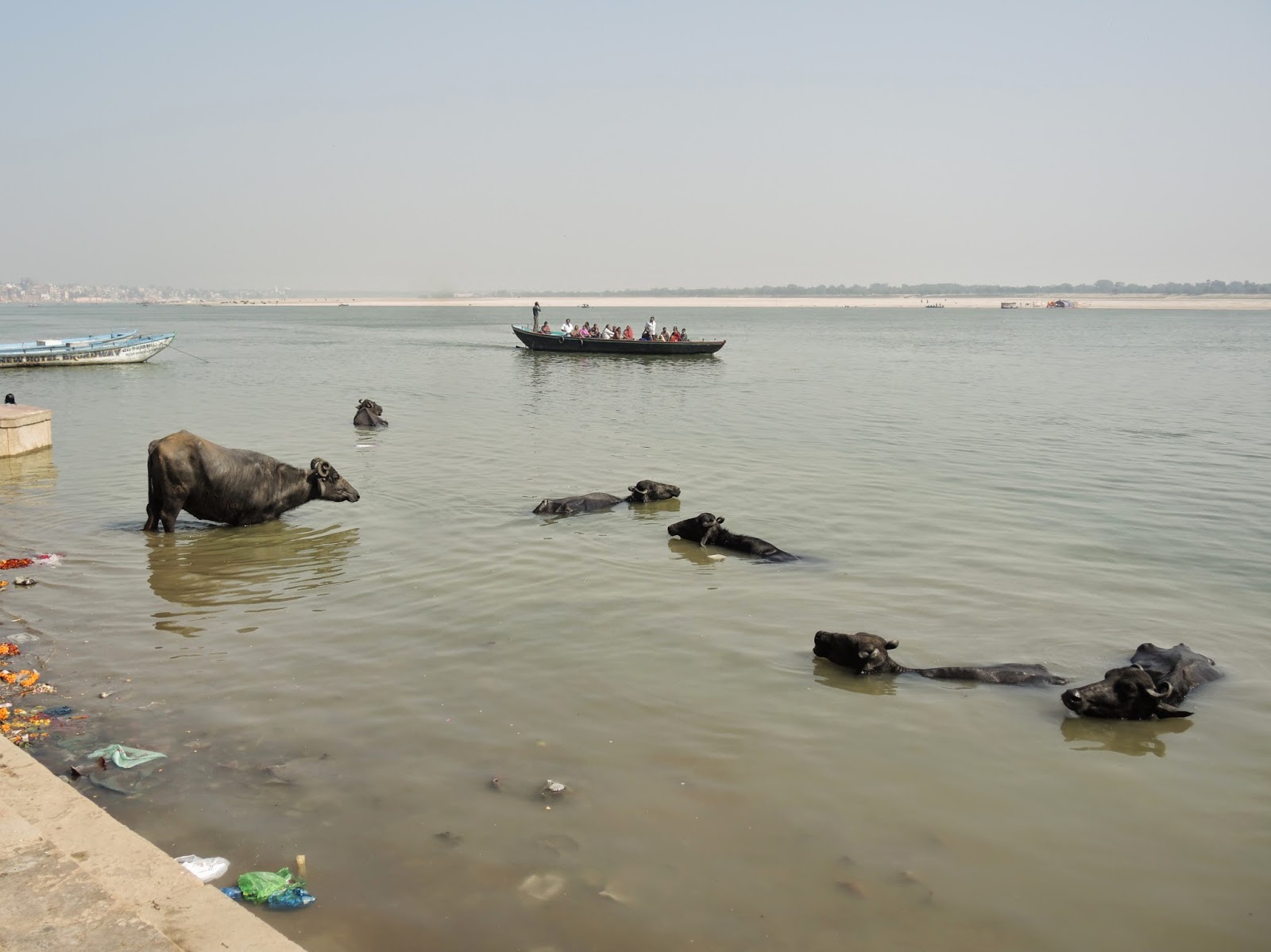 Even the animals aren't afraid to take a dip! Needless to say, we did not.

You'd even see (and I shudder just typing it) the odd corpse floating in the water. The vast majority of bodies here are cremated, but there are five categories of people who cannot be burned, namely: children, pregnant women, sufferers of leprosy or smallpox, holy men and those who died from a snake bite. These people are floated out onto the river and then sunk to the bottom with rocks. But sometimes they come loose and... well, you can imagine the rest.

Back to our time here, as I said earlier, there's nothing in particular to see, so it's just a case of strolling along the river's edge and just experiencing the craziness of it all. The only place we really went out of our way to visit was a famous little lassi shop called Blue Lassi, which serves up a huge selection of the traditional Indian yoghurty drink. 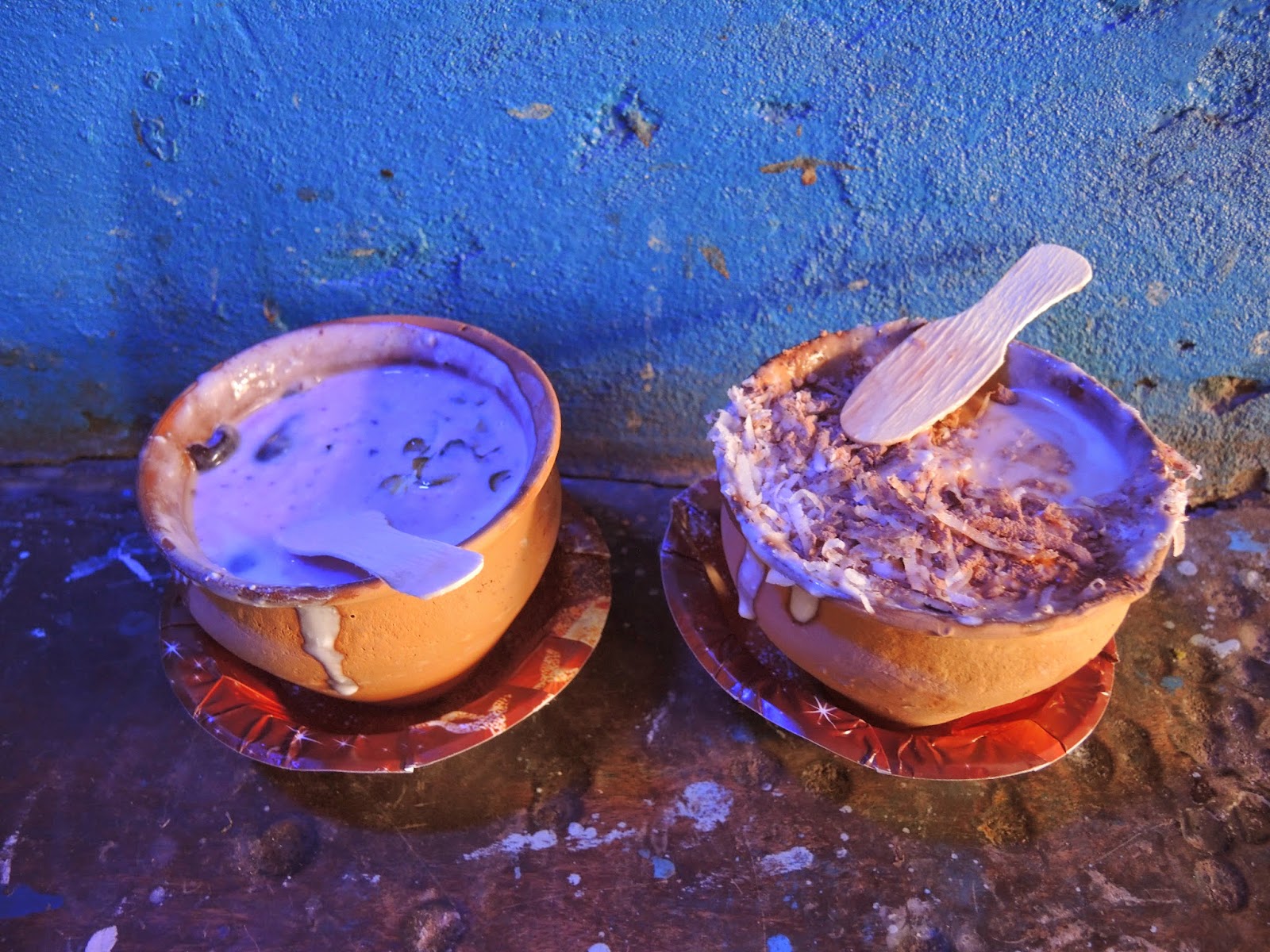 It was really delicious, even though it probably looks more like water scooped from the Ganges!

We also paid a visit to the two cremation ghats where the burnings are carried out (sure, what else would you be doing on a Thursday evening?!). It's quite a sobering experience to see the bodies (even though they were wrapped up), burning on the pyres. And of course, after being in the fire for a while, the outer wrapping also burns away so you see an actual person there. It’s one of those things that you don’t want to see, yet you can’t look away. It's hard to tell what's more polluted here, the water or the air. In most places in India you wouldn't know what you were breathing in. Here, it's more a case of who! We also saw our favourite shrine ever! Now people here worship many gods, with multiple limbs, animal heads, pretty strange looking characters, but check out this shrine to some sort of amorphous blob! 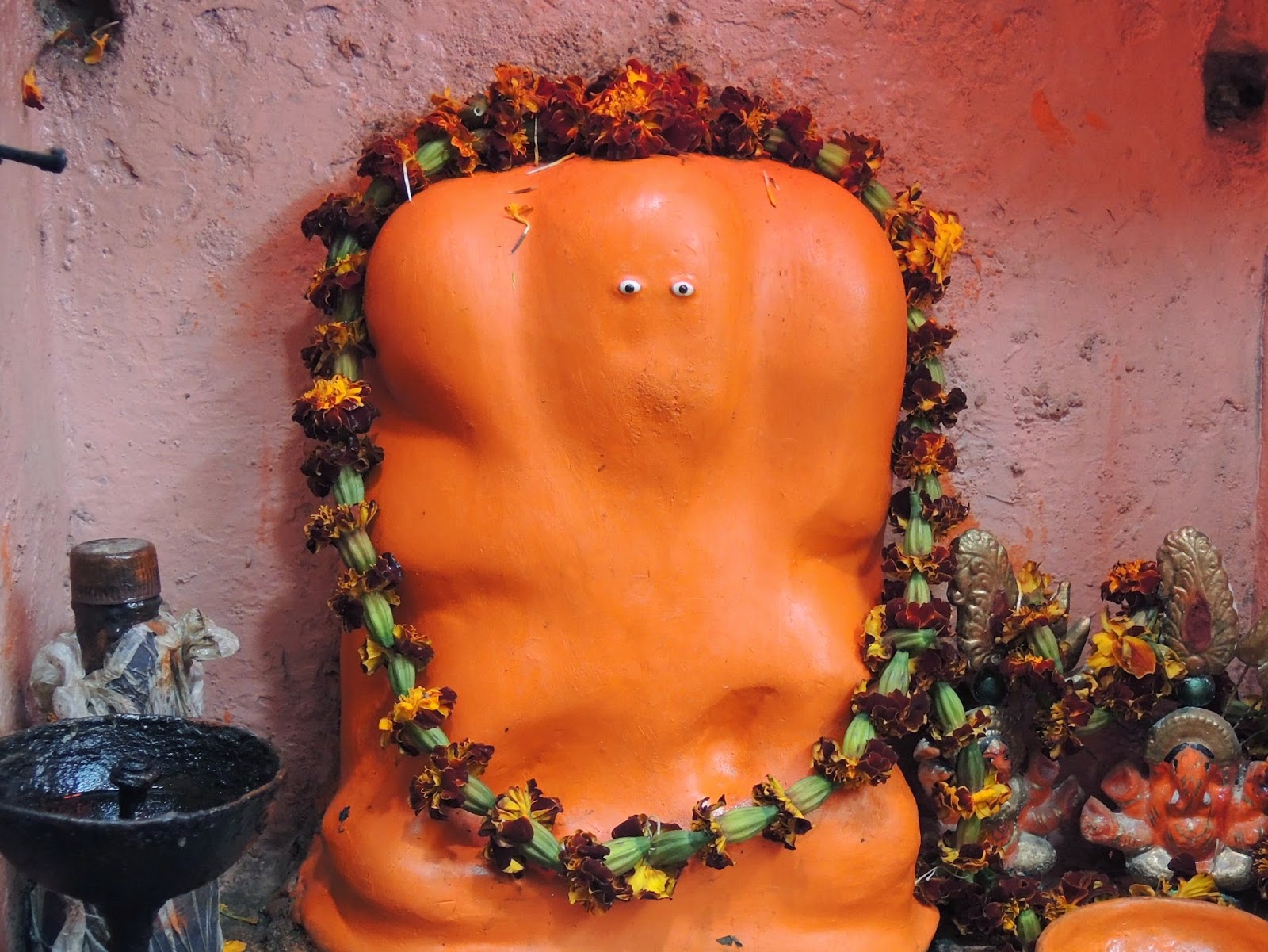 I presume it was a proper statue at one time and it has since melted or eroded or something, but seriously… just look at it! Ever since, whenever we're feeling down, we just think of that shrine and it always makes us smile. Now that's a God worth believing in!


We also saw a goat wearing a shirt, so it was a pretty memorable day overall. 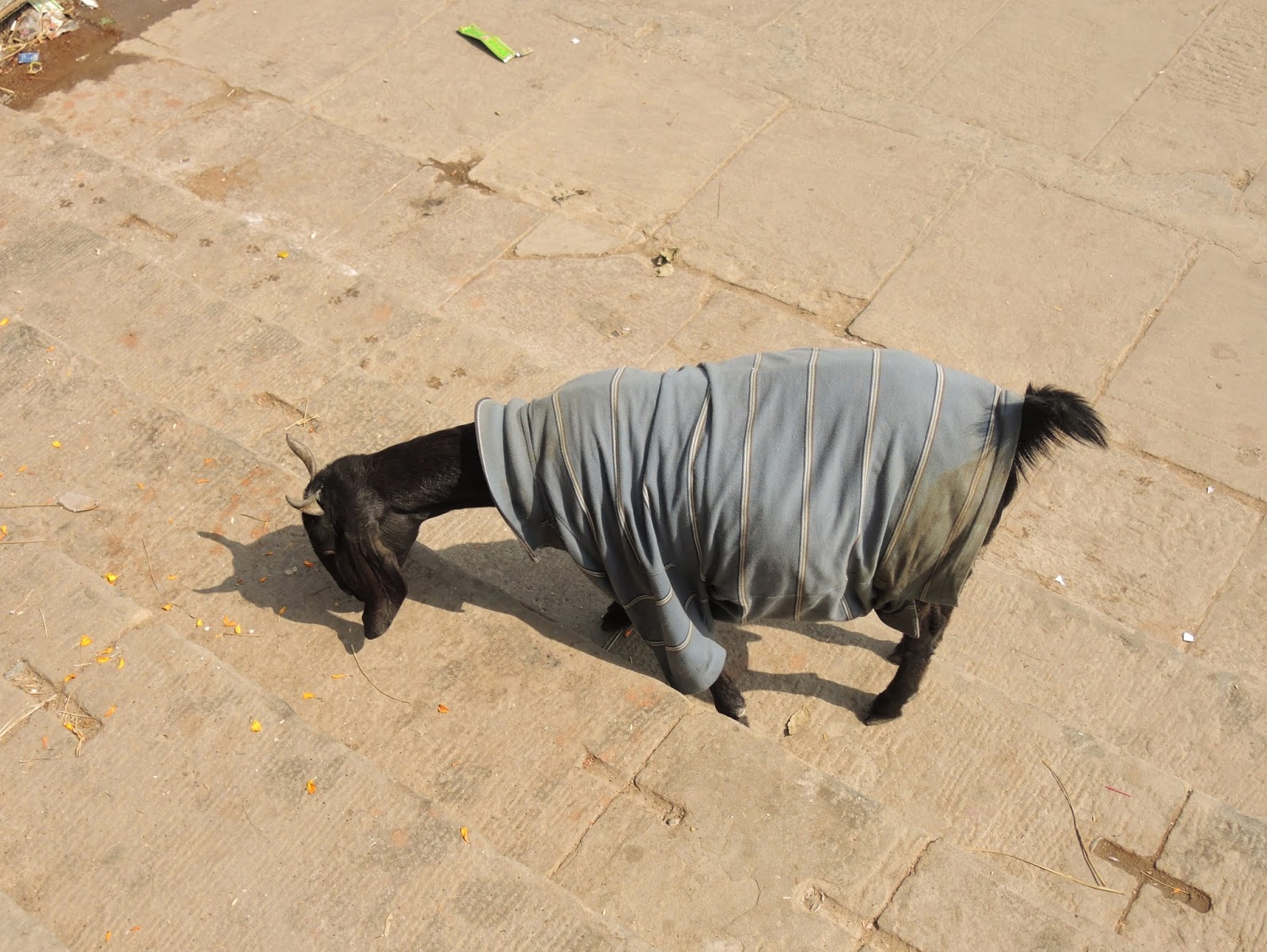 All that was left was to make a video diary...


...and that was the end of our time in India! I can’t think of a more fitting place to conclude things. 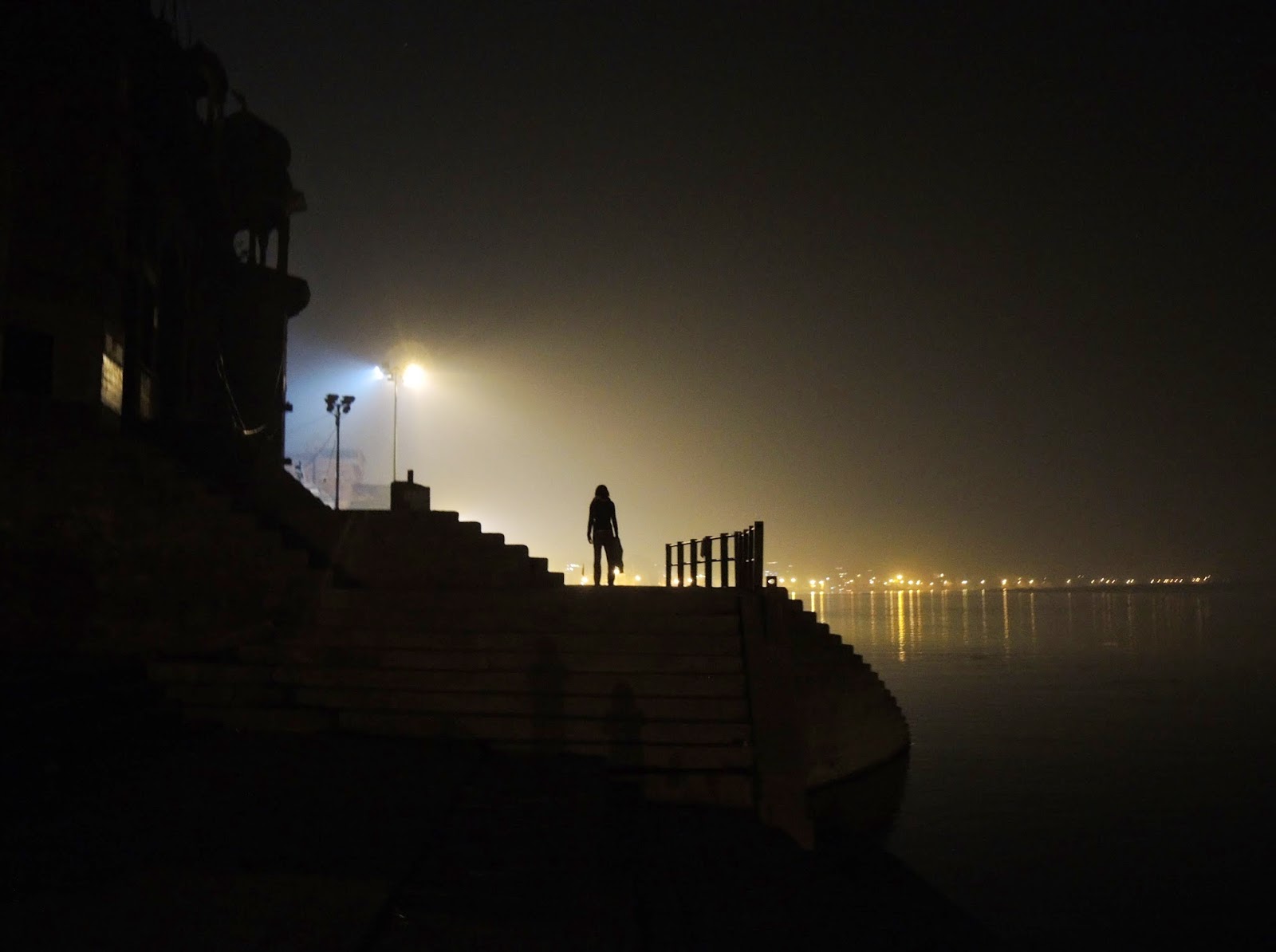 It’s was a bit of a bittersweet farewell as we absolutely loved our 5 and a bit weeks here, but part of us was just glad that we made it out in one piece! In all of our travels over the past 3+ years, this was the country I was most anxious about from a safety point of view, even more so than North Korea! We’d always be quite alert in every country we visit anyway, but here, I was always switched on to what was going on around us; from surrounding footsteps, to people slowing their pace and gazes from the corner of my eye. I always felt like I had to be on guard. Even in some situations where I felt a bit unsafe, I’d play out in my head what I would do if we were attacked. It’s a good thing nothing did happen as I probably would have been too busy daydreaming about it to actually defend myself in real life!

But make it out we did, and even though India has many bad things about it, and some huge problems in its society, the good things far outweigh the bad, and it's definitely up there in our list of favourite countries. For now, it was into Nepal and the simple task of climbing (on) Mount Everest!
Posted by Mark O'Leary at 3:36 PM