Before we set off on our travels, this was one of the places we were expecting great things from. Everyone we had spoken to, and everything we had read, gave rave reviews about Luang Prabang, and don’t get me wrong, it was a lovely place, really lovely, and we have a lot of very fond memories from here, but I think it may have suffered a small bit from being built up too much. It really is a great place, just go there expecting it to be rubbish…

Luang Prabang is Laos’ biggest tourist hotspot but, similar to Ubud in Bali, even though there were a lot of tourists around, it never felt in the least bit touristy or crowded. There’s just a pleasant vibe around the place, the kind of town to wander about at your own pace, rather than rushing from A to B. It’s got a nice set up too, adding to this sleepy ambiance – a pocket-sized town centre with a river on each side, scatterings of charming temples here and there, quaint waterside cafes and restaurants, and a small hill overlooking it all. 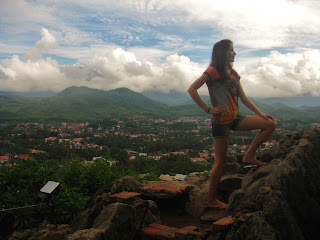 Our own high expectations may have hindered Luang Prabang a tiny bit, but the biggest obstacle, for our first two days here anyway, was the weather. Luckily we had given ourselves plenty of time, so it didn’t affect our plans too much. It did mean that our first day in town was a complete write off though, but we did get some ground work done for the rest of our stay, booking an elephant trek for two days later, and our bus tickets out to Phonsavan.

The next morning wasn’t much better weather-wise, but not knowing whether or not it would clear up during our stay here, we had no choice but to brave the elements and see what the place had to offer. As I mentioned earlier, the town itself is quite small, so we were well able to see everything on foot with little effort, although we had to enjoy everything through the downpour. 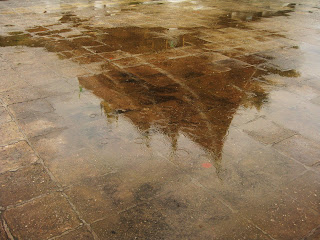 We were still able to appreciate the beauty of the place despite the rain, the highlights being Haw Pha Bang and Wat Xieng Thong, some of the most beautifully designed temples we've seen anywhere on our travels.

Now, most temples you'd see around these parts would maybe have a lion or a dragon at the entrance, to "ward off intruders", but to be honest, they're wasting their time. They should all get one of these guys, they're terrifying! I was even half frightened to walk past it! 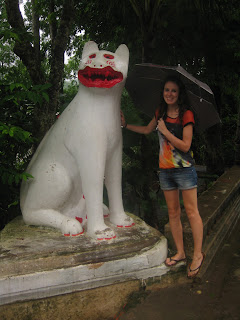 With the weather halting our progress, we instead turned our attentions to hunting. Hunting what, you ask? Why, the deadliest prey of all, monks. The town was absolutely littered with them, so whenever a bunch (a flock? a gaggle…?) walked by, we’d spring into action, trying to get a sneaky pic without them noticing. It got to the stage where we’d even stealthily follow them down the street for a block or two, just to get a good picture. 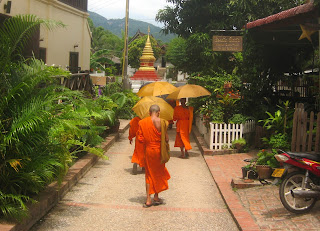 The clouds had cleared somewhat by the afternoon, so we climbed up Mount Phousi in the centre of town. I say "Mount" Phousi but it’s really only a small hill. There were some nice views though of the town itself and the surrounding area.

As we came back down, the main street had been transformed into a night market, with lines of stalls all the way along, selling the usual – scarves, bracelets, artwork etc. We already had a bagful of souvenirs from Hoi An though, so we had to put the blinkers on and plough straight through, trying not to catch a glimpse of anything along the way.

The next day, we thankfully woke up to blue skies and enjoyed the highlight of the trip for us so far, as we packed our trunks and set off on a morning of elephant trekking! 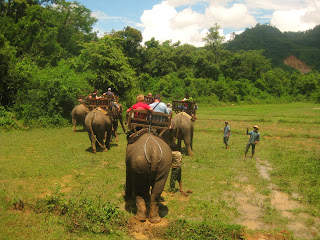 We were taken by minibus to the forests outside Luang Prabang, and then downstream by boat to the All Lao Elephant Camp where we hopped aboard our four-legged friend for the day. The first hour we spent trekking through the jungle, myself and Ais seated on a little bench on the elephant’s back, with the mahout (elephant driver) seated in front. Halfway through, he asked if I wanted to “take the wheel”, so to speak. And I did! Riding an elephant, some laugh! 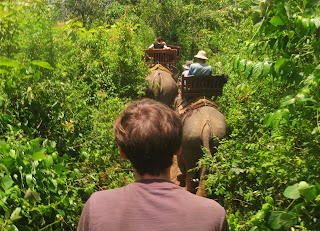 I had cleverly camouflaged myself for the occasion too…

Now, I don’t know if it was down to my mahout-ing skills, or if we just had a particularly stubborn elephant, but he was out of control! He kept going off course, crashing into bushes, stopping for lunch breaks and generally acting the maggot! If he didn’t weight 10,000 pounds, there’d have been some trouble, let me tell ya…!

The trekking was great fun, but the highlight of the day was definitely going bathing with the elephants, clinging onto their backs as they waded into the river and gave themselves (and you!) a good soaking. And even though we were bombarded with trunkful after trunkful of water, it was a refreshing way to cool off under the hot sun. 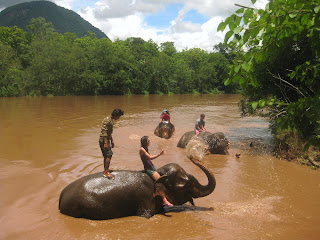 After leaving the elephants behind, we had a nice riverside lunch, before heading on to the Kuang Si Waterfall / Bear Sanctuary (an odd mix, I know), where we had another refreshing dip in equally spectacular surroundings (although, the water here perhaps looked a bit more appetising...). We spent about two hours there, lounging around, cooling off, and there was even a rope swing into the water, if you were willing to take the plunge. 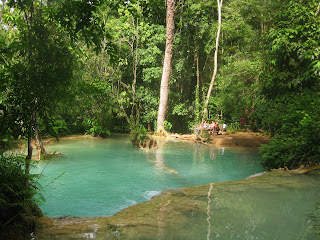 The next day and our last in Luang Prabang, was spent re-walking the town, this time with a lot more sun, and a lot more fun! I know I say it all the time, but you can't beat a bit of blue sky! And even better with a few fluffy white clouds in there to seal the deal! 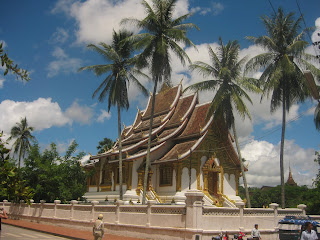 So, we had another stroll around the town, back through all of the temples and halfway up Mount Phousi where we made another video diary!

We also went into the Royal Palace, which is now a museum, but not a very interesting one. The best thing about the palace grounds is Haw Pha Bang, pictured above, but you can go into that for free, and see it from the roadside too, so there's no need to waste your money.

And on that cheery note, I'll sign off! The next morning we got a 7 hour bus to Phonsavan, our last stop in Laos!
Posted by Mark O'Leary at 3:45 AM