So, welcome to our extra special update of the blog, full of Easter(n) promise, detailing our travels across the self-proclaimed "Heart of Asia" - Taiwan. (If it is the heart of Asia, then the blood it pumps must be Taipei positive! Hioooo!) Anyway, we only had about 7 days to travel over Easter, so we thought places like China or Indonesia would be too big to conquer, and better left for another time. But Taiwan was just right! We didn't get to see the whole country of course, but a week was a good amount of time to spend there.

Previously known as Formosa, which (as well as being a really cool name) comes from the Portugese for "beautiful", and it certainly was that. For the most part though, you'll have to take a step outside the big cities to find this beauty, and head towards, not only the island's natural wonders, but also its traditional ways. 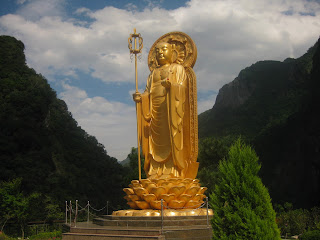 So, we set off from HK on the 21st of April aboard our EVA Air flight to Taipei. And even though the flight was only like 90mins long, we were still served a meal and had our own personal TVs! We were delighted! I guess we're just used to using cheapy cheap airlines like Ryanair and Air Asia...

(Side note: We just finished watching Lost recently, so as we were flying, I was half-thinking (and strangely hoping...) that we'd crash on some strange island. We'd be like the opposite of Jin and Sun surrounded by all these Asians!)

Anyway, (unfortunately...) we arrived safely in Taipei and made our way to our hostel. Seeing as we only had a week in Taiwan, we really wanted to make the most of our time, so we ended up going on day-trips to different places pretty much everyday. First up was Wulai, an aboriginal mountain town around 40mins from Taipei, famous for its natural hot springs. When we got off the bus, we took a steep stroll up to a nearby waterfall, the surroundings of which were all decorated with aboriginal art. It was really very nice. 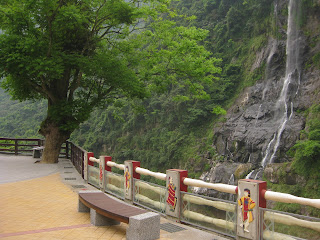 There was also a cable car that brought you further up into the mountains, above the waterfall, to some sort of... I don't even know how to describe it. It was like an abandoned holiday park, that wasn't yet abandoned... if that makes any sense...? There were lots of things there, an obstacle course, a swimming pool, amusement rides, a ghost train etc., but they were all either shut down or ridiculously unkempt! 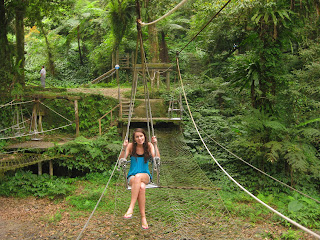 As you can see, we tackled the obstacle course, despite the slightly worrying warning signs... 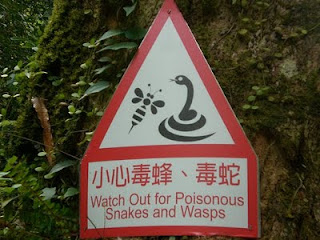 We also had a go on the ghost train, which I think was the only ride actually open. It was comically bad. But so bad, that it was actually a lot of fun! I guess it was fitting that the ghost train was the only thing open, seeing as the whole place was like a ghost town itself...

Afterwards, we got a miniature log train back down to the town centre and took a wander along the river side, by the famous hot springs. We were planning on taking a dip ourselves, but we felt a bit out of place, being the only Westerners around, and the only people under 70... It was actually really cool though, and there was something very wholesome about the place. It seemed to be a real social hotspot (pardon the pun) for the locals, popping down to the river to soak in the hot springs, what better way to spend your evenings! 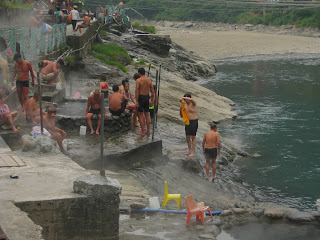 We got the bus back to Taipei that evening and got massive burgers for dinner! And when I say massive, I mean MASSIVE! It was nearly the size of my head! 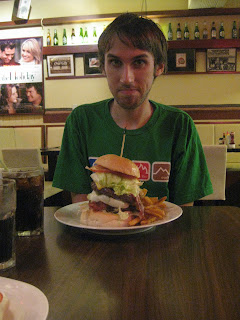 The next morning, we grabbed breakfast in a nearby bakery, and set off on another day-trip, this time to Yeliu. (Even though we spent our first two nights in Taipei, we didn't actually get to see any of the city until the day before we flew home!)

We hopped on a bus to Keelung, dumped our bags in the lockers at the bus station, and then on to Yeliu, a town on the coast, famous for its strange rock formations. It was really nice there actually, something different, which is always good. 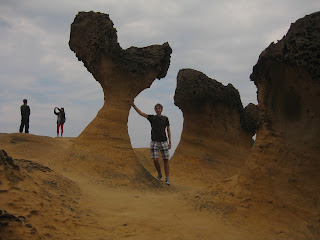 There were about 20 different rock formations to enjoy, which apparently all looked like things. A lot of them didn't at all... (in fact I'm sure we walked past some without even noticing). Although having said that, there were some really good ones! The Dragon's Head was the most impressive and our personal fave, even though it wasn't the most famous. 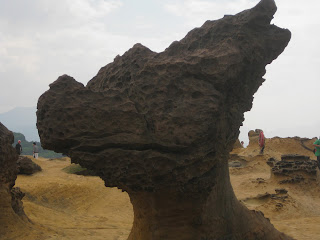 The most famous was by far The Queen's Head, which is a bit of a landmark here in Yeliu. There was even a queue of people lining up to take pictures with it. It was cool alright, but we still think The Dragon's Head was better... 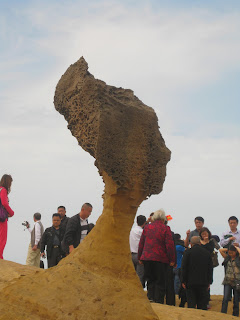 The only other one worth mentioning was The Fairy Shoe. It was a cool place overall though, and definitely worth the visit! 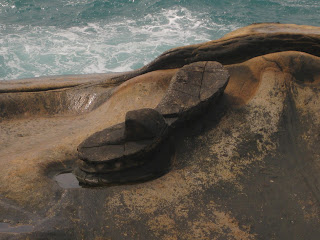 After Yeliu, we got a bus back to Keelung, grabbed our bags and jumped on another bus to our next destination, Jiufen. (It was all go-go-go for the week, but we really organised our time well to maximise what we got to see!)

And so, Jiufen... the highlight of our trip I'd say. When we got off the bus, it just seemed like your regular, run of the mill mountain town. But when you veer off the main road and onto Jishan Street, it's like stepping into a different world completely. The narrow streets pull you into the heart of the place and walking by food stalls, tea houses and traditional craft shops, with lanterns lighting the way overhead, it's hard to even tell what century you're in! (Although that illusion was broken somewhat when they started playing Johnny Logan in our hostel...). 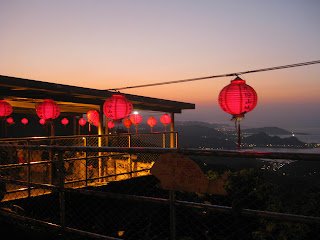 As it's such a small town, there was very little in terms of accommodation. One of the few places we did manage to find online, did happen to have a website, although it was all in Chinese... so I had to use my best Mandarin to email them booking a room, with the help of Google translate of course! And when I say "with the help of", I mean "based entirely on"... (It's not our fault though, they don't speak Mandarin in Hong Kong! Having said that, we don't have any Cantonese either...).

We got ourselves settled, took a wander around, and then, the next day, we set off on another day trip! This time not too far away, just down the road to the nearby town of Jinguashi, the former gold mining capital of Taiwan. And boy do they make the most of that reputation! Everything in the town is golden this or golden that... We did have a really good day there though! We started off with the Gold Ecological Park, and had a look at the various things on offer. It was a beautiful day too, which made it a lot more enjoyable, and because the town is in the mountains, there was fantastic scenery all around to savour. The park actually made up most of Jinguashi itself, so we spent most of our time there, hiking up and down the hills and taking in the local landmarks, like the Shinto Shrine, 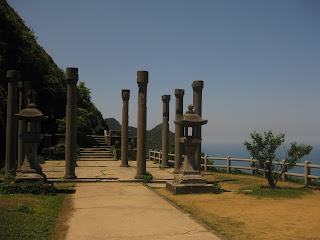 And Teapot Mountain (they really have a passion for naming rocks after things here). 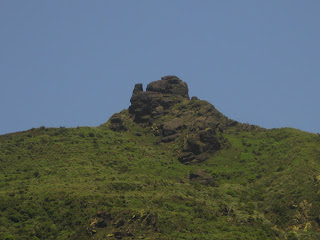 Outside of the park, we hired a taxi to take us around to the other wonders of Jinguashi (there were actually quite a few!). We first went to the "Golden Waterfall", which was awesome! Or rather Au-some! (a little periodic table joke there... ahem...) But actually, despite the name, it gets its colour from the copper in the rocks. I guess the "Copper Waterfall" isn't as catchy, or in keeping with the theme of the town... 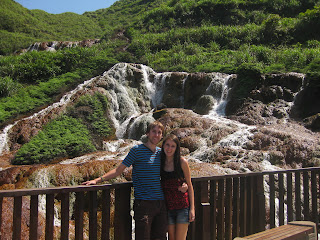 It was a really beautiful spot though, with the array of different colours all around, and there was a nice little viewing platform too, where you can take it all in.

Next we followed the winding river down to where it enters the Yin Yang Sea, (I'm sure you can see from the picture where it got its name). 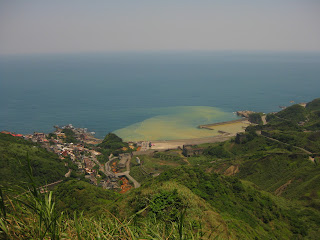 When we looked down on it from up in the mountains earlier on in the day, we thought it was pollution flowing into the sea, but no, it turns out it's just the golden colour from the river! It's really cool actually, not something you see every day. And down where the river meets the sea, all the rocks have been dyed a rusty orange too. It's probably one of the most naturally colourful towns we've seen! 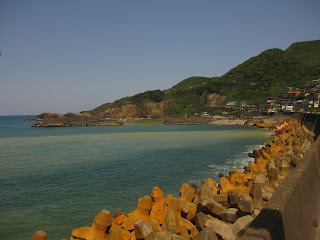 And literally 100 metres behind where this photo was taken, is another one of Jinguashi's landmarks, the Shuinandong Smelting Plant, well, what's left of it... 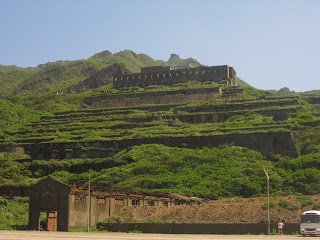 This was one of the highlights of Jinguashi for me. I don't know why, but I love to see buildings taken back by nature, just like Ta Prohm in Cambodia. It's got a very post-apocalyptic feel to it!

Last up for our day in Jinguashi was a quick trip down the road to the "Nanya Peculiar Stones", it's only worth noting for the name really. It was nothing like Yeliu or anything like that, it was just a small area along the coast, where the rocks were... slightly misshapen, that's it. We did end up with lots of photos there though, not because we were eager to get pictures of ourselves with these rocks, it was our taxi driver. He insisted on taking photos of us in front of everything! We didn't even ask him! 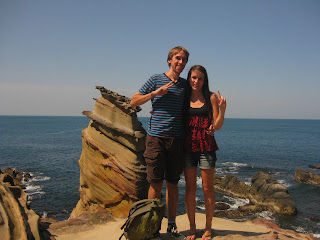 And so that was our day in Jinguashi. We got the bus back to Jiufen (only about 10 mins away), and spent the rest of the evening walking along Jishan Street, checking out the market stalls, and I even tried some traditional food! Well, it was ice cream... but not as we know it! It some sort of weird ice cream wrap. (I apologise in advance for the poor description). Ok, so it's basically a very thin pancake, covered with a layer of peanut shavings, two scoops of ice cream and topped off with... I'm not actually sure. I've tried looking it up online. Some say watercress, some say coriander, either way, things that should never go with ice cream! 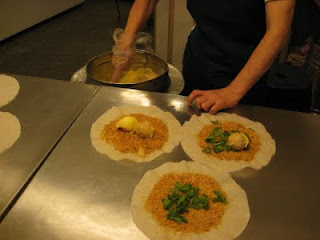 But having said that, it was actually really nice! Ice cream and green stuff, who'd a thunk it! A match made in heaven!

We also got back just in time to watch the sunset over Jiufen. We're clocking up a fair amount of beautiful sunsets on our travels! 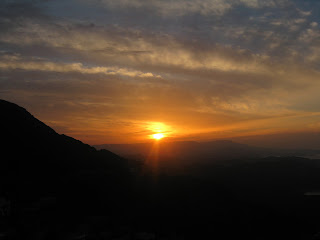 The next day, our last one in Jiufen, we tackled Mount Jilong, a 588m high peak, with lovely views over Jiufen and Jinguashi. It was a bit of a steep climb, and extra tough under the hot sun, but we made it to the top in about 45 mins. It was very quiet actually. We passed some people on the way up, but that was about it. We like to think we were the only ones tough enough to brave the climb! When we reached the top, we ended up just lazing about for a while, checking out the views and of course, taking our, now customary, jumping shot. 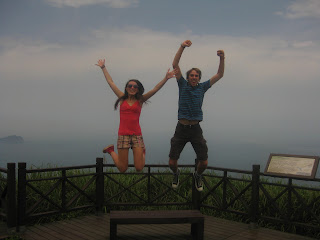 That mini-tripod is the best investment I ever made!

We went to see a local temple as well before we left, and it was actually incredible, with great views, but I can't find the name of it anywhere... oh well! 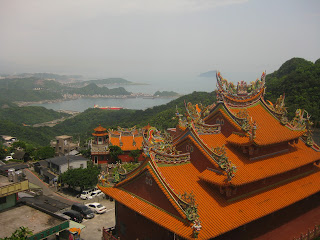 And that was pretty much it for our time in Jiufen! And for part 1 of the Taiwan blog. Hopefully it won't take as long to write the second part... eek!