Borneo, Borneo! Wherefore art thou Borneo?! After waving goodbye to Indonesia, we set sail (metaphorically) for our new island home for the next two weeks. Housing three different countries, naturally the place is utterly diverse, from the lush Malaysian rainforests, to Brunei's extravagant mosques and Indonesia's... ok, we actually didn't get to see the Indonesian part... but I'm sure it's lovely too! 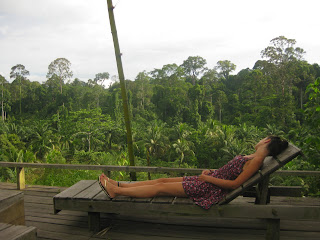 We landed in Kota Kinabalu late on the night of the 18th, two days after leaving our last stop off point of Gili Air. And our travels weren't over yet! We were literally just bedding down to be up again the next morning for the 8am ferry to Brunei, via the port of Labuan. In terms of the countries of Borneo, Brunei is certainly the runt of the litter (albeit an oil-rich, lavishly wealthy, strict Muslim runt!). It's a place I never in my life thought I'd be, but one I'm glad I did get the chance to visit, even if just for a couple of days.

Those couple of days were spent in the capital, Bandar Seri Begawan, (or BSB as all the cool kids call it), a mini Singapore in a way; clean, pleasant and with little splashes of grandeur here and there. And like Singapore, they're equally strict on things like litter, drugs and that's even before you take into account their strong Muslim beliefs, so that means no drinking! (This is my kind of country!)

They're also equally keen to whip out the cane to enforce these laws... 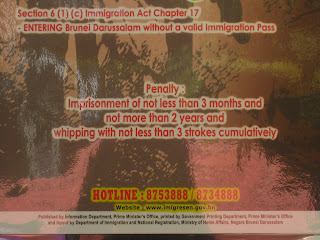 On our first night in town, we went to see the Jame'Asr Hassanil Bolkiah Mosque, the biggest mosque in Brunei. In fact, we were actually walking somewhere else at the time, but when we caught a glimpse of its golden spires, it just drew us in, there was no escape! The interior of the building is described  as "jaw-dropping" by the Lonely Planet, but unfortunately, seeing as it was Ramadan, we weren't allowed inside... disaster! We were half tempted to throw on a couple of burqas and sneak in, nobody would know the difference! Alas, we  just had to enjoy the view from the outside, which in fairness was incredible too. 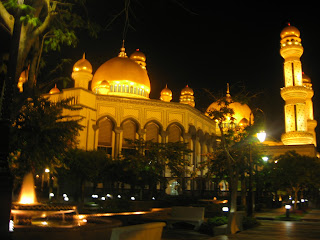 At that stage it was quite late, so we just got something to eat and hit the hay. Things are quite expensive here, well compared to Malaysia, Indonesia etc. anyway, so it was probably just as well that we were only here for a couple of days. One thing that's ridiculously cheap here though is petrol. In terms of Euro, it's only like 18c per litre! Not surprising I guess seeing as they're an oil producing nation. It's seems though that all Islamic countries are oil producing ones. Is there a reason for this...? I don't know...

The next day, our only full one in Brunei, we went to Jerudong Playground. Built by the Sultan as a present to the Brunei people, it is the biggest theme park in South East Asia... or at least it was... due to poor attendance, most of the rides are permanently closed, leaving the park in a semi-abandoned state. Being honest though, that's the only reason we went to see it! You can see theme parks anywhere in the world, but it's rare to find an abandoned one! Or at least semi-abandoned... 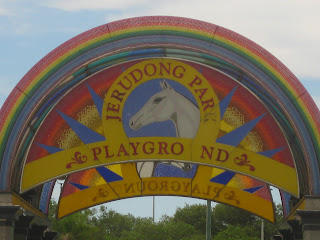 It still had opening times though! We got a bus there from BSB at around 12pm, only to see a sign saying that it didn't open til 2! Ugh... This place was really in the middle of nowhere, so all we could do was walk around for two hours, waiting for it to open. As I said, this was our only full day in Brunei, so it's a shame that we had to waste two hours of it just counting down the clock. Eventually, 2 o'clock rolled around so we went inside to the ticket office... only to find out that it didn't open til 5! All we could do was laugh really... 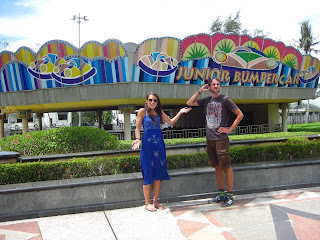 Well, no. All we could do was laugh... and then sneak in! The gates weren't locked, there was no staff, no security and we were in the middle of nowhere! Sure, why not?! 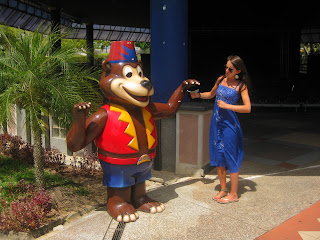 What else could we do! We tried to buy tickets, but nobody would take our money... 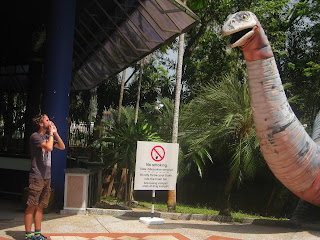 We tried to ask for help but nobody would listen to us...

We actually had great fun there, even though we didn't actually go on any of the rides... Eventually, a security guard showed up and spotted us, so we just played the dumb tourist card - "Oh, we thought it was open, oops! We wondered why there was no one around, etc.", and made a swift getaway.

The rest of the evening, we spent at the Sultan Omar Ali Saifuddien Mosque in the centre of BSB. Again, we weren't allowed in, but it was still beautiful from the outside. 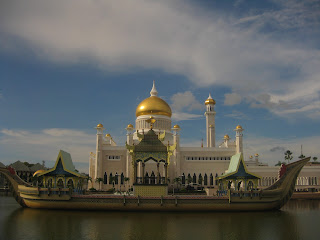 It's surrounded too by this artificial lake, with a pier leading down to a long, intricately decorated boat. I don't know why it's there, the lake is tiny and completely enclosed, so it can't go anywhere... I don't even think it's a real boat...!

The mosque was undoubtedly an amazing sight, but if you only turn around 180 degrees, you could well be a million miles away, with a sea of stilted shanty towns all along the riverside. They seem quite out of place in a city like this, but especially when placed directly opposite this lavish, golden temple - the juxtaposition of two entirely different worlds. 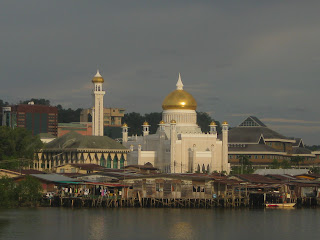 (Actually, while I was taking this photo from a nearby bridge, a massive lizard ran right past me! And when I say massive, I'm talking a good four feet long! It was ridiculous! And ridiculously fast too! I tried to get a picture but it was too quick for me, running across the bridge before diving into some bushes)

We went to the cinema too that night to see Hanna, and were the only two people in the theatre! It really was a day of isolation for us...

The next morning we were off again, back to Malaysia leaving Brunei behind. Well, technically we left Brunei behind, then came back in, then left again etc. etc. ad nauseum. You see, to get from BSB to Kota Kinabalu by bus, you have to cross the Brunei - Malaysia border a good 5 or 6 times, and that means getting off the bus to get your passport stamped at each crossing. Still, my passport is filling up nicely! I only got it last October and it's already over half full!

We landed in Kota Kinabalu that evening, again just to get food, bed down, and then out the gap once more, this time up north to the monkey-filled rainforests of Sepilok! 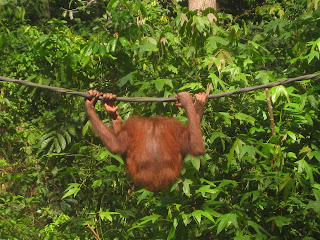 Sepilok's main attraction, as you can see above, is its Orang Utan Rehabilitation Centre, set right in the heart of Northern Borneo's vast jungles. Outside contact from humans is obviously kept to a minimum here, but there are two daily feedings where you can see the orang utans in their natural habitat. And that's not all! During the feedings, some sneeky macaques wander in from the forest to pinch some food for themselves. It's hilarious really, like a pre-rehearsed routine. The orang utans don't really seem too fussed by their naughty neighbours though. 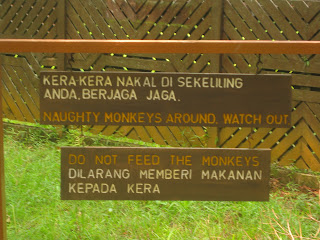 I know it's a bit of a stereotype in the animal kingdom (if there even is such a thing), but monkeys really are bundles of fun! I could watch them for hours! 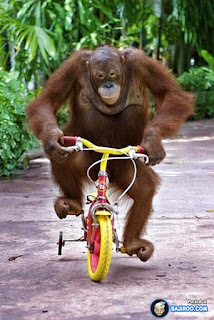 Ok, I just stole that picture from the internet, but look at him! He's riding a bike!!

In between the morning and afternoon feedings at the Orang Utan Sanctuary, we wandered up the road to the  Rainforest Discovery Centre, a beautiful national park with tropical plants, jungle trails and treetop canopy walks. 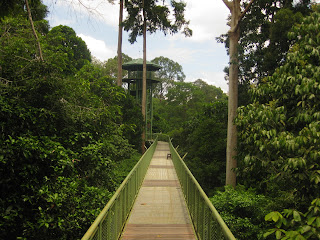 We even took another video diary there, look!

And that's about it! We returned for the afternoon orang utan feeding, and then back to our jungle cabin for the evening. We had a really lovely day, and lying in bed that night, listening to a tropical rainstorm alongside the sounds of the jungle, really was a perfect way to end our brief stay in Sepilok.

The next morning we were up and on our way back to Kota Kinabalu, ready to fly out to our next destination, Kuching!
Posted by Mark O'Leary at 6:47 AM No comments: