Next up, another double whammy - Hiroshima and Miyajima. These two were always on our list of places to see in Japan, but when we realised that we would be in the country for the anniversary of the atomic bomb, we pretty much scheduled our whole Japanese itinerary around Hiroshima. It's been 67 years since the place was destroyed, but you'd never know it. The only evidence of that fateful day is the purposefully untouched A-Bomb Dome, which was one of the few buildings to remain somewhat intact after the blast. Nowadays it's a booming (poor choice of words) city, akin to any other in the western world, with a thriving tourist industry. Although the question is, would we and all these other tourists have bothered to come here if the city had never been destroyed at all? 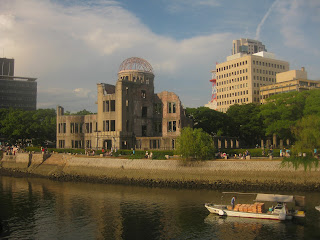 We first arrived in Hiroshima late on the night of August 2nd, although it was just the briefest of stays for now (we'd be back for good two days later). When we arrived at the train station, we obviously must have looked lost as a lovely security guard came over and tried to help us as best he could with his zero English. He did manage to find us a map though and pointed us in the right direction. The Japanese really are the best! The fire alarm went off too in the middle of the night, but we just stayed in bed. Thankfully the Japanese seem to have the same attitude towards fire alarms as the Irish - just ignore it and it'll eventually stop ringing...

The next morning we were up and off again to the island of Miyajima, home to one of Japan's "Three scenic views". Now, we didn't get a chance to check out the other two on our travels, but this one was pretty spectacular. 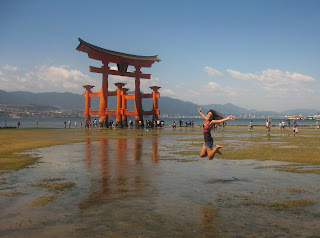 The Itsukushima Shrine was our first stop of the day - a Shinto shrine built on a pier-like structure above the water line. The tide was well out however when we arrived, so we were able to walk around the beach and take a few snaps of the surrounding area. The most striking and recognisable part of the shrine was of course the large torii gate located on the beach front. It's just one of those places that you could stand and look at for hours. We didn't... but we definitely could have! We did come back here again though for sunset. 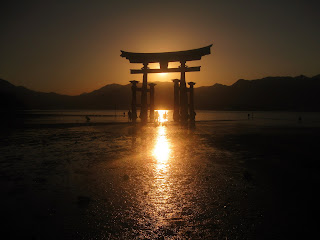 Afterwards, we took a long hike up to Mt. Misen, the island's highest point, stopping off along the way at Daisho-in Temple. Although it was a steep climb to the top, especially under the hot summer sun, it was a lovely walk, especially with all of the surrounding greenery (and yellow and reddery...) to observe. 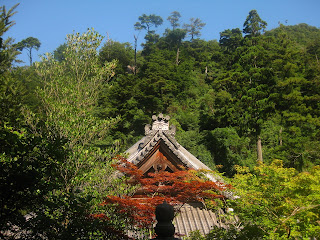 It was of course worth the trek for the view from above. And we reached the top in perfect time too, as there was a small shop up there just about to close (I guess mentioning there was a shop at the peak makes our mountain climb sound less heroic...). So after a couple of cokes and a nice scenic rest, the sun was about ready to pack it in for the day and so we headed back down to the torii gate for a magical sunset. 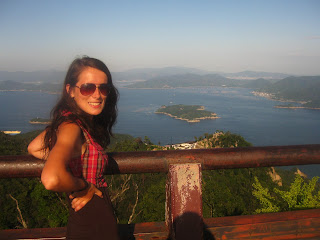 Our hostel was on the mainland, so we had to get a ferry back afterwards, but we returned again the next morning for another half-day. The tide was in this time around so we got to see the shrine again, this time as it seemingly floated on top of the water.

We were planning on getting something to eat here too but the restaurants seemed a bit dear... 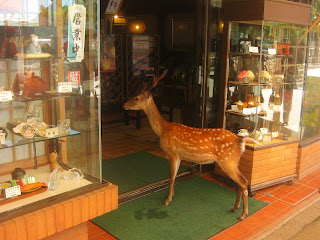 There were a lot of deer on the island actually, not just this guy. They're very tame though, they just wander around, looking for food, having a laugh, classic deer hijinks.

We also saw something pretty special, and I'm not sure how to give it a truly fitting introduction, so I'll just come out and say it - The World's Biggest Wooden Spoon! How jealous are you right now?! 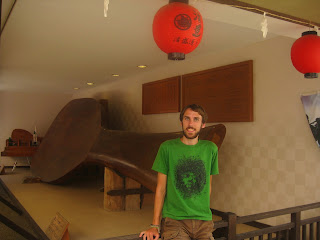 Miyajima must have the most well-behaved kids in Japan for fear of being on the end of the world's largest spanking!

After seeing that, everything else would just have been a disappointment so we got a ferry back to the mainland, collected our things and returned to Hiroshima. Miyajima was amazing though, with so much to see and do for such a little island. It's certainly worth the detour. 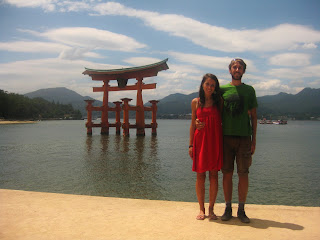 So, back in Hiroshima, and the next morning we booked two tickets for another slice of Japanese culture, BASEBALL-ARU!!! They're mad for it! It's by far the most popular sport over here and luckily enough, there was a game on that night. So, off we went to the packed out Mazda Stadium to see our boys, the Hiroshima Carp, take on the Hanshin Tigers - a real grudge match, I'm sure you'll agree. 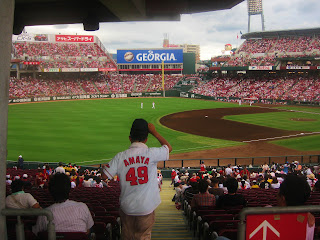 We really enjoyed ourselves, for the atmosphere more than anything, not so much the baseball (it's just not an interesting sport). The fans were amazing, I've never seen such enthusiasm. And I don't mean the raw emotion of cheering your team on, it was pure controlled excitement. Everyone clapped their hands, waved their batons and song their songs together - it felt more like a kindergarten class than a sports stadium. We loved it though! The Japanese are so nice and endearing. At one stage too, it started to rain, so the woman next to us gave Aisling a towel to wrap around her head. And not just until it stopped pouring, but to keep! The Japanese like... 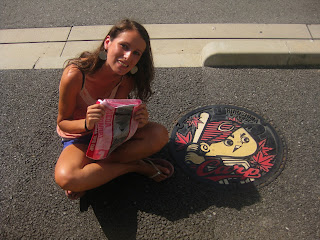 After a grueling three hours (that's just too long for any sport), the mighty Carp recorded an impressive 7-0 victory. Now I'm no expert on baseball, but I think our quarterback managed to sink a couple of three-pointers in the second down, allowing us to slam dunk our way into the endzone... USA USA USA!!!

The food in the stadium was great as well! 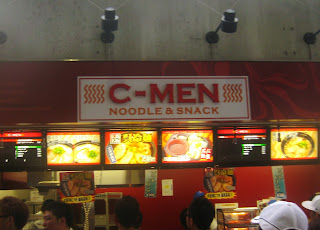 I'll have to look up their recipe. The special sauce was delicious!

The next day, our last in Hiroshima was one of the most memorable of the trip. It was of course the anniversary of the dropping of the atomic bomb, so our day revolved around that. We first visited the A-bomb dome and then the Peace Memorial Museum, which was especially moving. We're usually not big museum people at all, but this one is definitely worth a visit, especially for the day that was in it.

There were also numerous anti-nuclear protests around the city during our stay, all very respectful of course, this is Japan after all. Hiroshima seems to have become the capital of this movement, and I suppose it has become even more relevant recently after the earthquake of last year which caused the Fukushima nuclear disaster.

We also paid a visit to Hiroshima Castle, which was also destroyed in the blast but now restored. 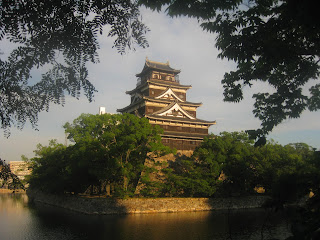 The highlight of our time here though was definitely the lantern ceremony of that evening. We were lucky to get a good spot along the riverside as crowds of people gathered round to watch thousands upon thousands of paper lanterns being released downstream. The whole scene was just so perfect with this river of flickering lights set against the backdrop of the ghost-like A-bomb Dome. 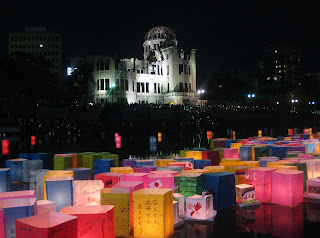 And I think that's a good way to end this blog entry. We also have another video diary which you can see here:

The next morning, we got a train back across the country to Kyoto, so we'll see you there next time!
Posted by Mark O'Leary at 8:56 AM No comments: