First there was Ho Chi Minh City, then there was Hoi An, and now, continuing the Vietnamese trend of “H” cities, is Hué (and we still have Hanoi and Halong Bay to come!). To sum up our stay here, I’d say it was “quite nice”, and that’s about it. Hué was just a short two day stop for us, and it didn’t let us down by any means – great weather,  lovely sights, excellent accommodation, I don’t actually have anything negative to say about the place – yet for some reason, it just seemed to be lacking that certain something that I can’t quite place. Maybe it suffered for being the stop after Hoi An, maybe I just overlooked its appeal, either way, it was a solid, 7 out of 10 town for me, and nothing more. (Aisling thought it was really nice). 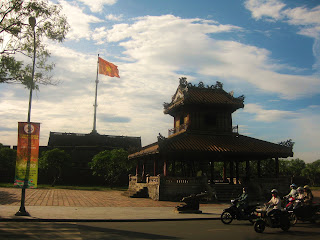 We arrived in Hué on the afternoon of the 25th and, very conveniently, the bus-stop just so happened to be across the road from our accommodation, the Hong Thien 1 Hotel. We couldn’t have picked a better place to stay either, it was the business! And our room in particular. It was probably bigger than our whole apartment in Hong Kong! We had booked a double room, which in our minds, meant a room with a double bed, but to them, it meant a room with TWO double beds! We didn’t know what to do with ourselves! We had regular fancy hotel things too like a TV, fridge, bathroom, but also a breakfast table, a desktop computer and two air conditioners! We could easily live there!

After a quick lunch nearby, we grabbed some bikes at the hotel and cycled out to Thien Mu Pagoda. 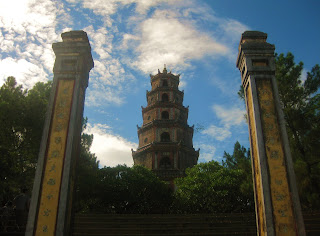 It was a lovely 4km journey across the bridge and along the banks of the Perfume River to the pagoda. The nicest part though was probably the courtyard at the back. A little gateway led through to a small temple where some monks were praying, there was nice greenery, incense burning, and of course, the blue skies helped too. 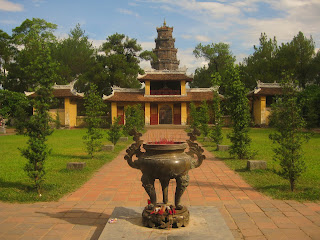 That evening, we had dinner and then just walked along the riverside, where there were various market stalls set up. Nothing to report about that. There's actually very little of interest on the south side of the river, anything of note is across the water, inside the walled city, which is where we spent the next day. We got breakfast in the hotel, hired some bikes once again, and then set off to the citadel.

As walled cities go, this one looks pretty tough to conquer - you've got the Perfume River in front, with a series of canals surrounding the square-shaped citadel on all sides. Inside this first layer of protection, you have a short strip of land before a 30m wide moat separates you from the 2m thick, 10km long perimeter walls. And that's just to get into the city, there's another citadel inside that citadel protecting the imperial enclosure! Just like a much more badass version of Eastenders...

We entered the citadel (the outer one) on the south side, through the Ngan Gate, and then took a leisurely cycle around the walls of the imperial enclosure (the inner one). It was a really beautiful day and quite quiet too, so we could take our time and enjoy the views, without much traffic or tourists in our way. After we looped around the imperial enclosure, we had to park up our bikes, and do the rest on foot, entering at the front again, through the Ngo Mon Gate. 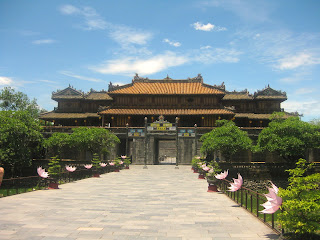 There's certainly enough inside to keep you entertained for a few hours, from palaces and temples, to statues and cannons. I won't go through everything we saw, but our favourite spot was probably the To Mieu Temple Complex, with its stunning pavilion, courtyard and nine dynastic urns. 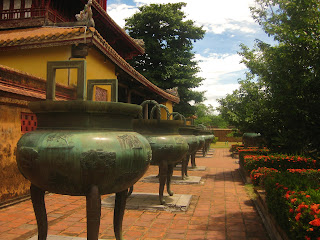 We made our video diary there too!

As the afternoon drew to a close, we picked up our bikes and rejoined the hustle and bustle of Hué traffic. It was nice to cycle along with the locals, weaving in and out of lanes and over bridges, something we'd never do in Ho Chi Minh City! 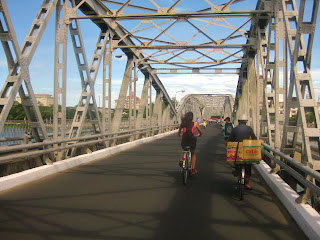 And that was our time in Hué (and Vietnam, for now). We're very impressed with the country so far, and hopefully the best is yet to come with Hanoi, Sapa and Halong Bay still on the agenda in a few weeks time. The next morning, we headed off to the bus station, ready for our Laos adventures to begin, but not before a hiccup or two along the way...
Posted by Mark O'Leary at 8:47 AM