And so we come to the end of our Laotian travels, last stop – Phonsavan! The town itself is little more than a central strip, but nobody comes here to see the town. There’s really only one reason to visit the area – the Plain of Jars, which is exactly what it sounds like – a big plain with big jars… and that’s it! We actually had a really great time here though, and it’s definitely one of the most unique places we've ever been. But if you don’t like big stone jars, you should probably stop reading now… 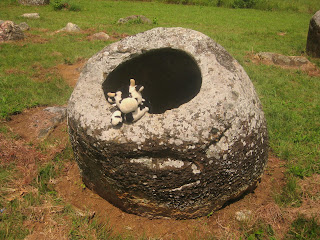 We arrived in Phonsavan on the evening of July 6th, after a bumpy but scenic 7 hour minibus journey from Luang Prabang. As we had been travelling all day (and since there’s nothing to do in Phonsavan), we just checked in, got food and enquired about tours to the jar sites for the next morning. We also met a lovely American guy named John, who had the same agenda as us for the following day, so we joined forces and agreed to meet up again the next morning.

Our plan was to wait until all of the tourists had set off, and then find a desperate driver who had been left behind and didn’t want to miss out on a day’s wages. And it actually worked a treat, with Aisling expertly negotiating a car for the day to take us wherever we wanted to go. So, off we went! 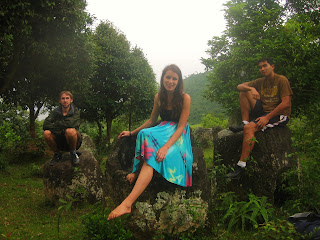 The jars themselves are a bit of mystery, over 2,000 years old and carved out of large boulders, it's still unclear what the hell they're doing there! Theories range from burial urns to rainwater collectors, and even the cups of mythical giants. Whatever their purpose, they're certainly interesting. There are apparently over 90 different sites in the area, ranging from 1 to 400 jars, but only a few are opened to the public. As I mentioned in a previous entry, Laos is still heavily covered in unexploded ordinance and here is no different, making most of the jar sites just enticing minefields. Even the sites that have been cleared, still have marked paths which you probably shouldn't stray too far from. 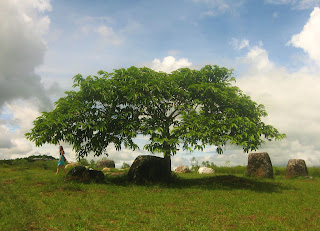 The jars themselves vary wildly in size and shape - big and small, horizontal and vertical, some perfectly preserved, others blown to pieces, and some even big enough to climb inside (although you're really not meant to), so of course we didn't... 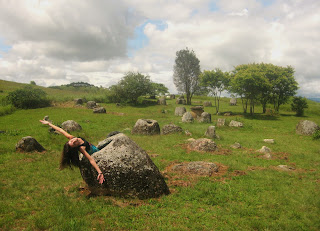 We had a really enjoyable day going around to the three main sites, each one with something different to offer. I’ll just scoot through them quickly as there's only so much I can say about each one. We started off, as you do, with Jar Site 1, the biggest of the three, and also the only one where we actually encountered any other tourists! It was probably the nicest of the bunch too, although some of the jars had been destroyed or fragmented during the bombings. There were still plenty to admire though.

After a nice bowl of noodle soup (I think it was all they served), we had a look around Jar Site 2, which was split into two halves. The first bunch were almost completely intact under a large tree, with the second lot up on top of a small hill overlooking the valley below. 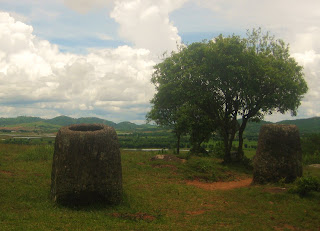 Jar Site 3 was certainly the most difficult to locate, as we had to journey across rivers and streams, through rice fields and over fences, finally spotting the cluster of jars under a small group of trees. As with Jar Site 2, we had the place to ourselves again, so we had to make the most of it, the only way we knew how. Some said it couldn’t be done, and after 21 tries, we were thinking the same, but at the 22nd attempt, we finally got our three person jumping shot! 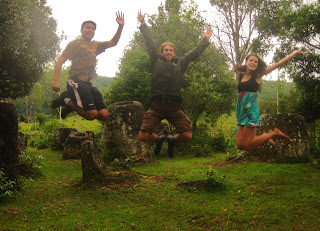 Phew! After we returned to Phonsavan, we rounded off our day with a nice dinner in one of the few restaurants in town and then said our sad farewells to John, before retiring to our room for the night.

Oh actually, while we were watching TV, we decided to tuck into a little snack that I had bought in Vientiane. 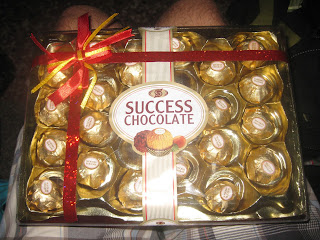 With these Success Chocolates, you’re really spoiling us!

What a pile of crap they were! I knew of course they’d never compare to real Ferrero Rocher (I only bought them so I could take a picture), but from the outside at least, they looked the part. It was when I took off the lid that this illusion started to unravel, with each step bringing a new level of disappointment. 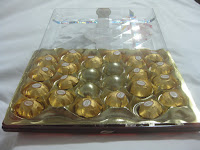 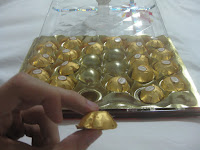 As you can see, the label cleverly conceals the fact that there are actually no chocolates in the centre of the tray, but that was the least of its deficiencies. It got much worse with the chocolates themselves. Instead of the usual rich, nutty ball of delight, there was just a pissy, little hemisphere of sheer embarrassment. No nuts, no wafer, I’d be tempted to even say no chocolate! 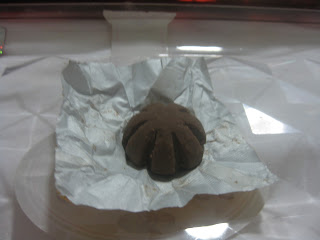 I took one bite and threw the box in the bin.

And on that note, it was time for us to head back across the border and leave Laos behind! So, how do I sum up our time here? Hmmm... Well, before we left on our summer holidays, I was secretly hoping that Laos would be the dark horse of the summer, charming us with hidden delights and coming out of nowhere to knock our socks off, but as we leave the country, we are certainly leaving with fond memories, though sadly, our socks are still well and truly on. It's a nice place, but it certainly won't be threatening our list of favourite countries. 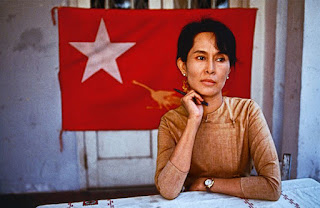 The next morning we set off on a long, long slog to Hanoi, arriving in the middle of the night after 20+ hours of solid travelling. From a surprisingly pleasant bus to Vinh, to a hideously uncomfortable train to Hanoi, the day was certainly one to endure rather than enjoy.

When we arrived in Vinh, we were originally planning to buy our tickets, chill out for a few hours, get some dinner and then grab two beds on a night train to Hanoi, but when we got to the station, all that were left were the cheapest of the cheap, hard seats on an overcrowded slow train, leaving in 20 minutes and arriving at 3am. Not the best welcome back to Vietnam we could have hoped for... 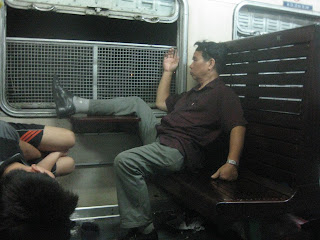 Check out this guy though! This is how you travel in style! Hello Hanoi!
Posted by Mark O'Leary at 12:09 AM