After visiting 20 countries in the last 3 years, and ticking pretty much everywhere east of India off our list, we’re making our Middle Eastern debut with an initially unplanned visit to the United Arab Emirates. We were originally ending our holiday in Hong Kong and flying straight back home from there, but Aisling’s start date was pushed back a couple of weeks, and seeing as we were flying to Ireland via Dubai anyway, we decided to extend our layover to give ourselves a full week here. Another plus was that I have cousins living locally, so it’s always nice to have a helping hand (and a place to stay!). 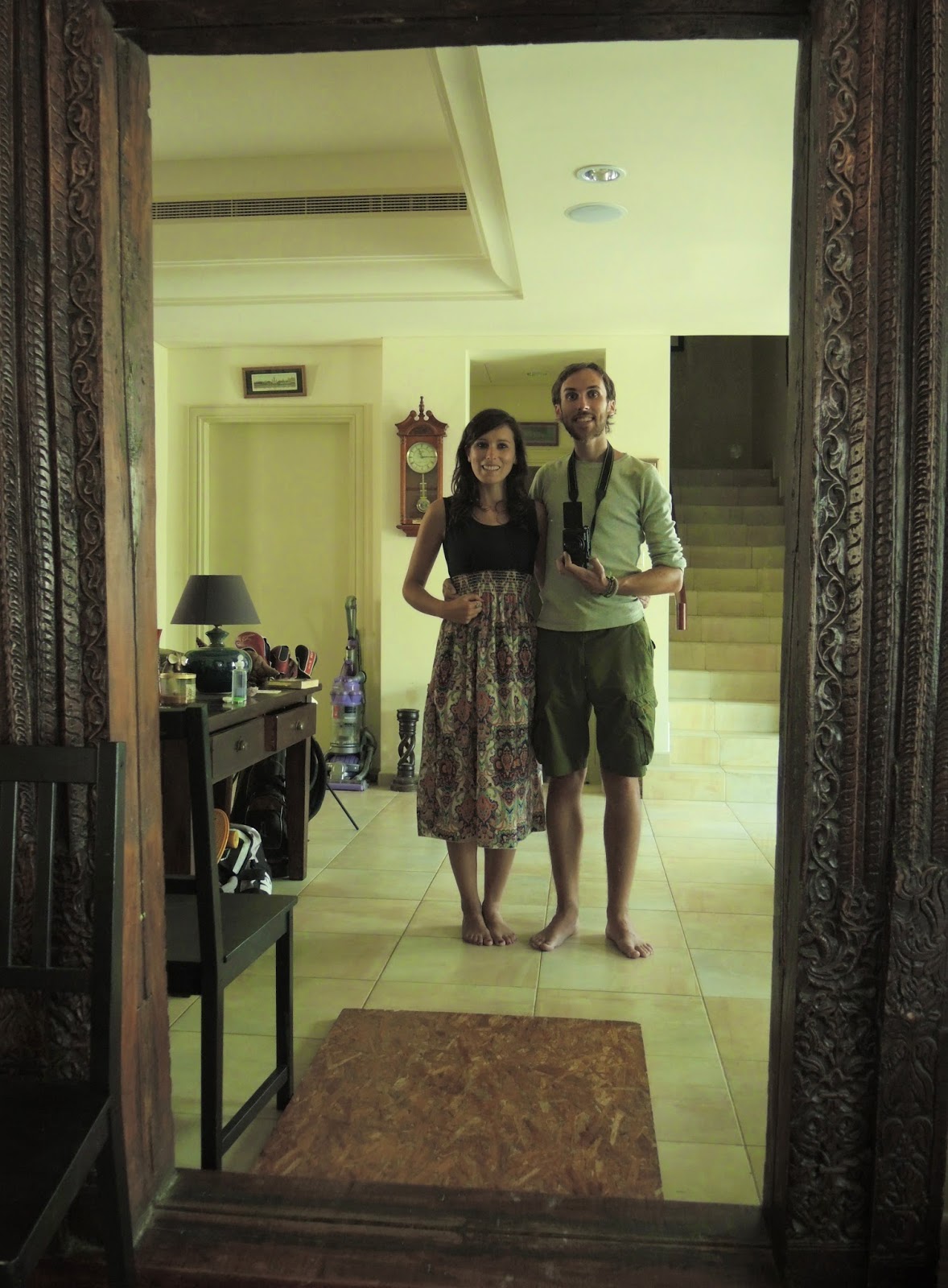 It was our first time flying with Emirates and they were the absolute biz! For starters, seeing as we were moving everything back with us, we had quite a lot of baggage (this was even after we had shipped back three big boxes). We were given a, very generous, 60kg between us, but at check in our bags came to just over 75kg. We started to sweat as we know how much excess baggage costs, but not a word was said about it. We were just checked in and sent on our merry way! Job! (They wouldn't be so lenient on the flight out from Dubai a few days later, but we'll come to that...). And the flight itself was just as good – great food, lots of entertainment choices and serious leg room too. Not even the couple in front of us, who reclined all three chairs could ruin it for us! (Seriously though, there’s nothing I hate more in life than people who push back their seats on planes or buses. Scum of the Earth!)

As for Dubai, it’s one of the strangest places we've been, in that it’s not really a city in the traditional sense; there’s no town centre or main street, it just seems to be a series of malls and skyscrapers dotted along a flat desert plain, interconnected by a massive system of highways. And I’m not talking regular dual-carriage ways here, more like serious 14 lane monsters! They’re almost as imposing as the buildings themselves. The city in its entirety is like a wonder of the modern age – the colossus of roads! 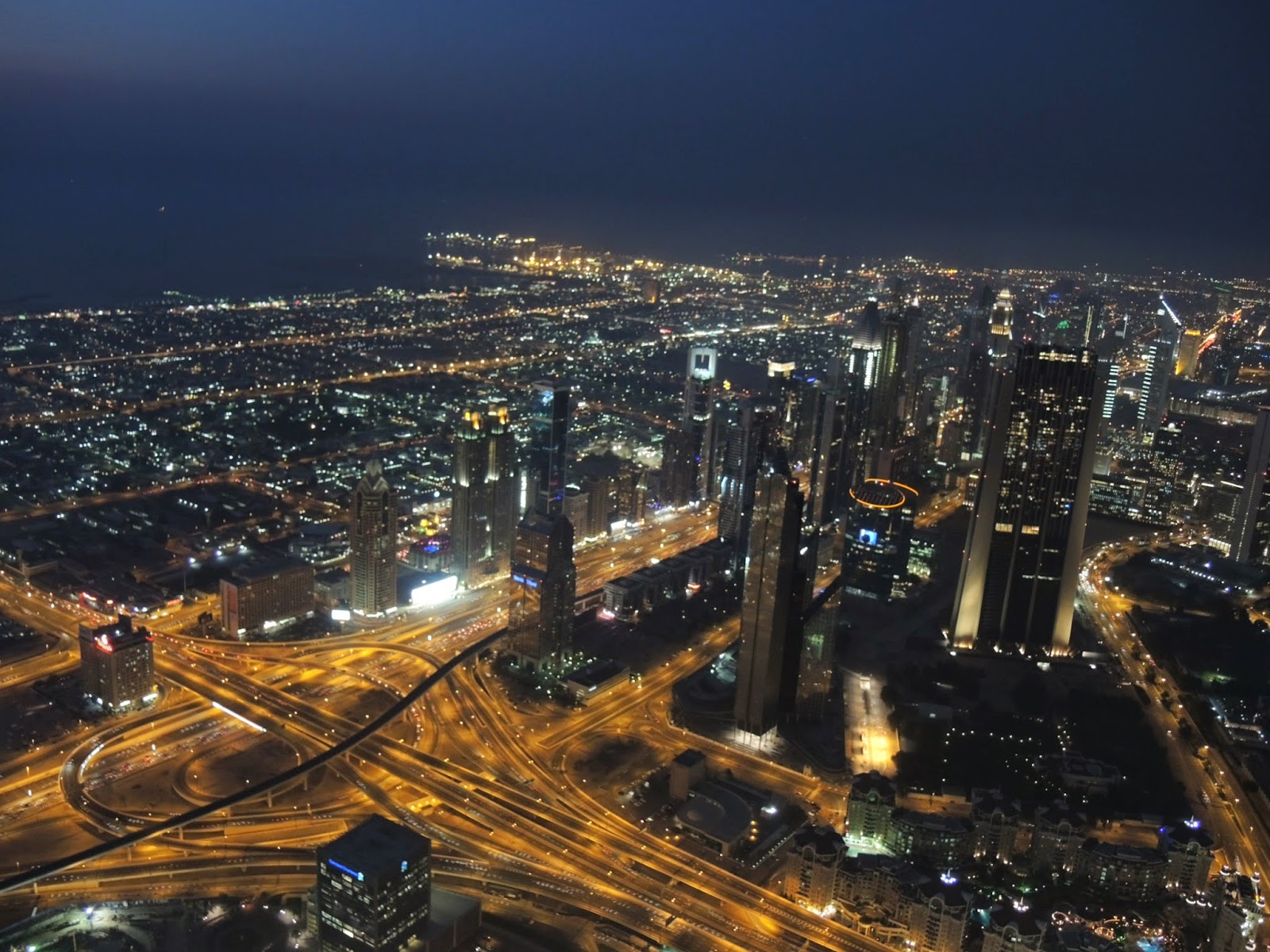 We went to a few different malls here: Dubai Mall (which is the biggest in the world), Mall of the Emirates and Marina Mall – each the size of a small Irish town. You’d think they’d be pretty similar across the board and one would be enough, but they’ve all got something unique to each warrant a visit, so don't just see a mall, see 'em all!

The first one we visited was Dubai Mall, which contains an aquarium, a waterfall, a skating rink, as well as every food and clothing chain you could imagine. 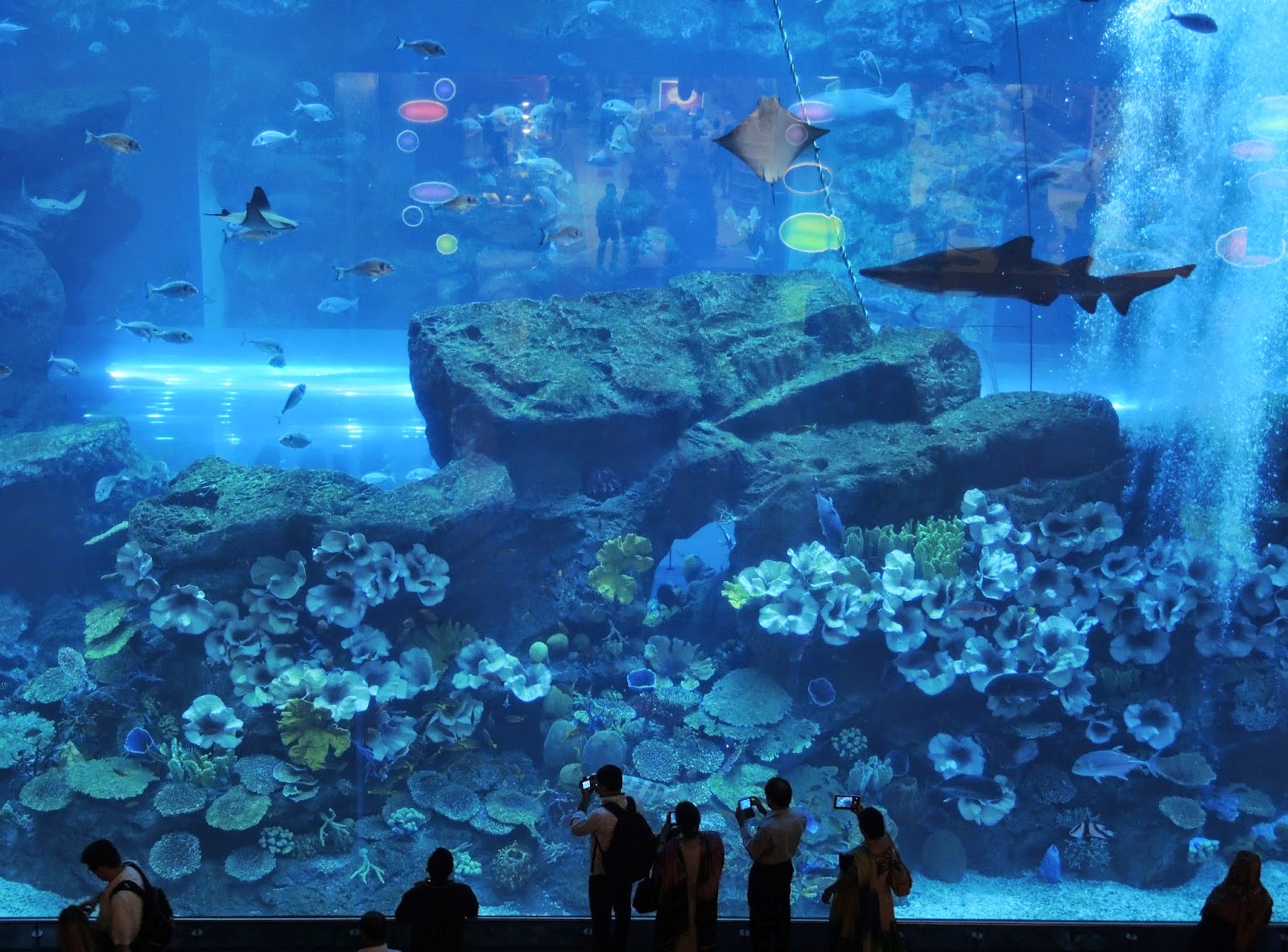 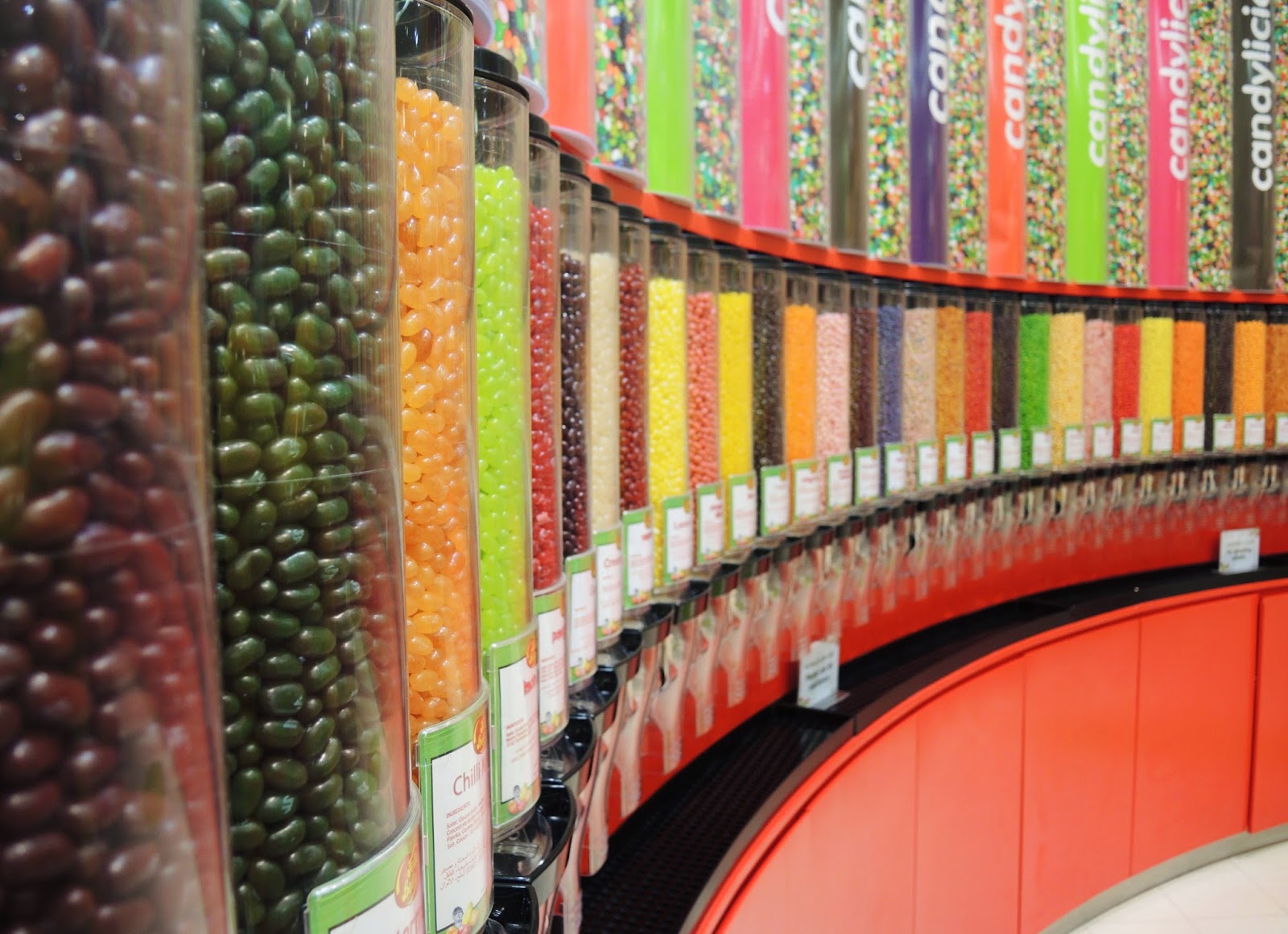 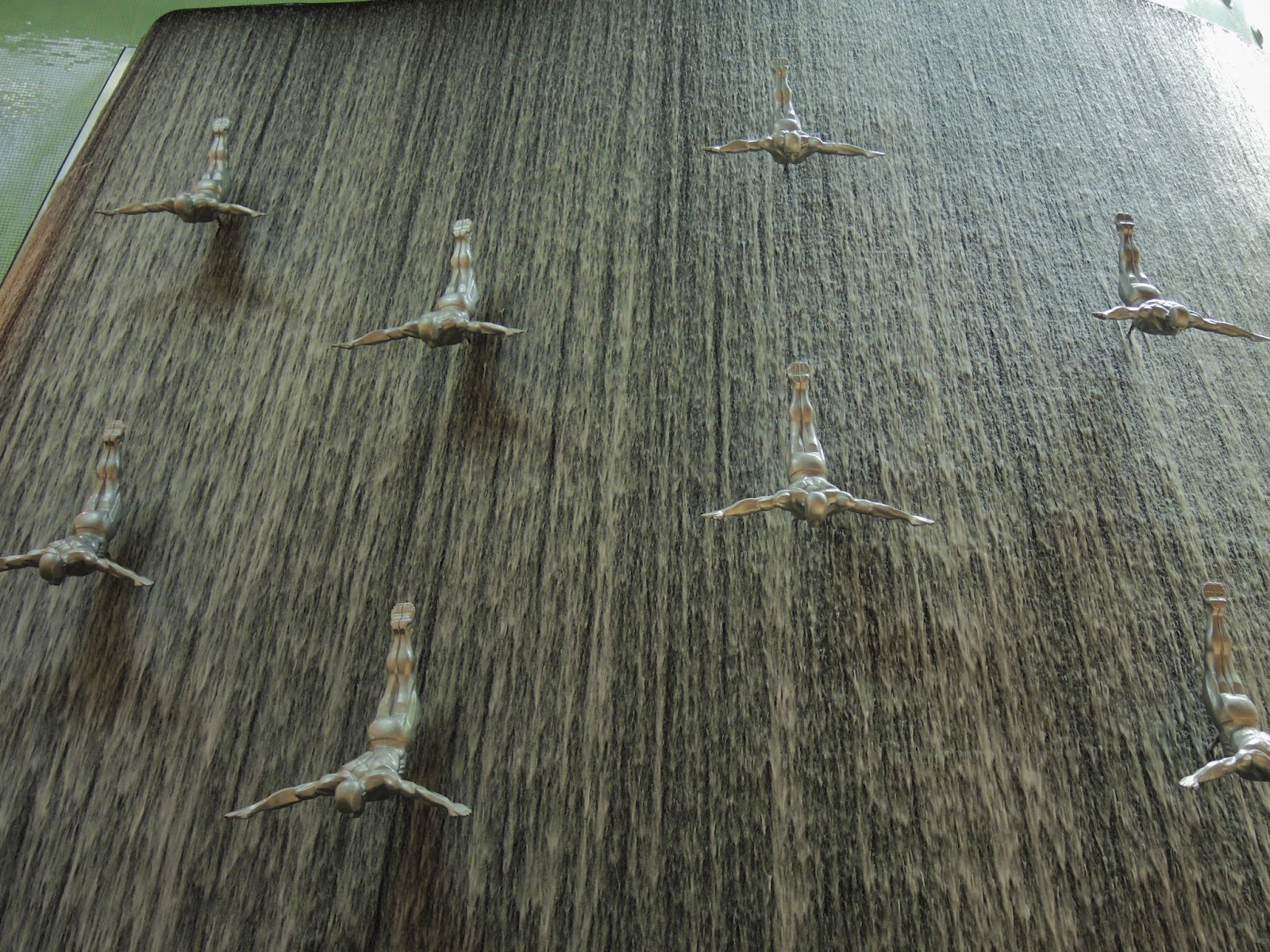 It's also located right next to the Burj Khalifa (I guess it's only right that the world's biggest mall should be beside the tallest building).

Next up for us was the Mall of the Emirates, and while Dubai Mall had a skating rink, this place had a proper indoor ski slope! Just in case you fancied a quick ski in a break from the 40 degree heat outside. 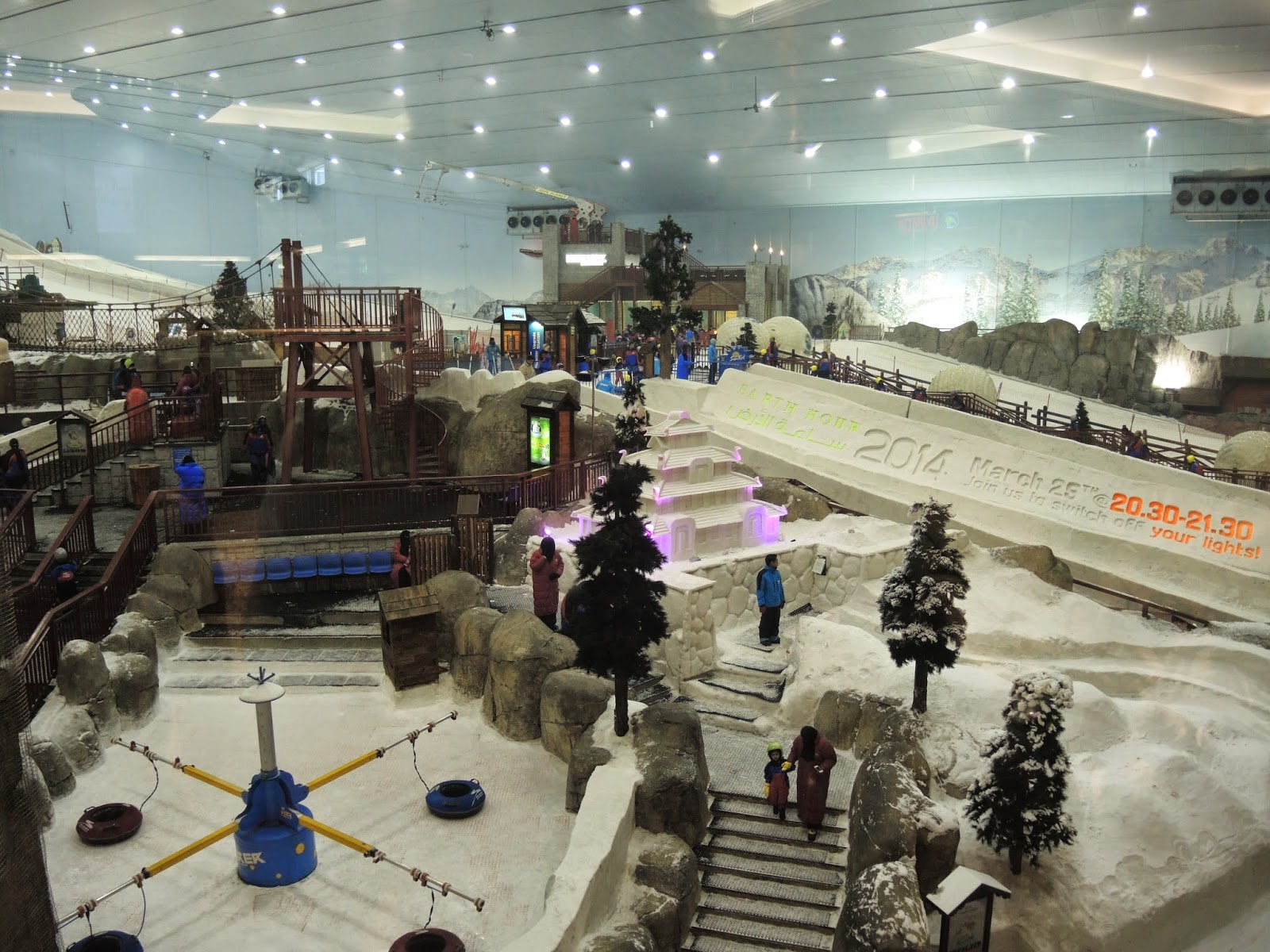 Some other highlights from our very busy first day in town included Jumeirah Beach, passing by the uniquely styled Burj Al Arab along the way and afterwards stopping off at the Souk Madinat - a modern version of a traditional Arabian market. Even though it wasn’t authentic, it was still really cool, and felt like something from Aladdin. And as we had never been in this part of the world before, it was certainly a whole new world for us! 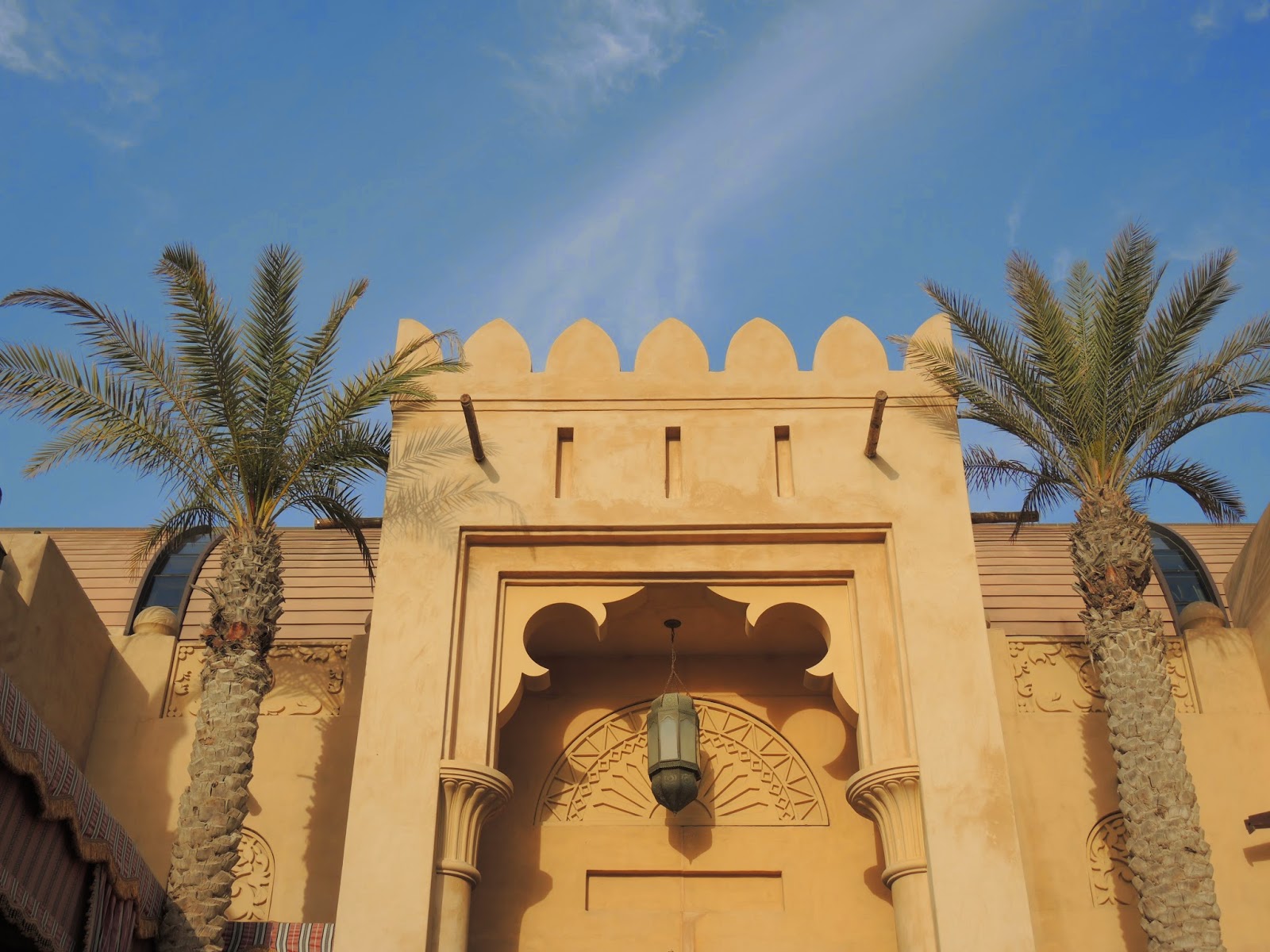 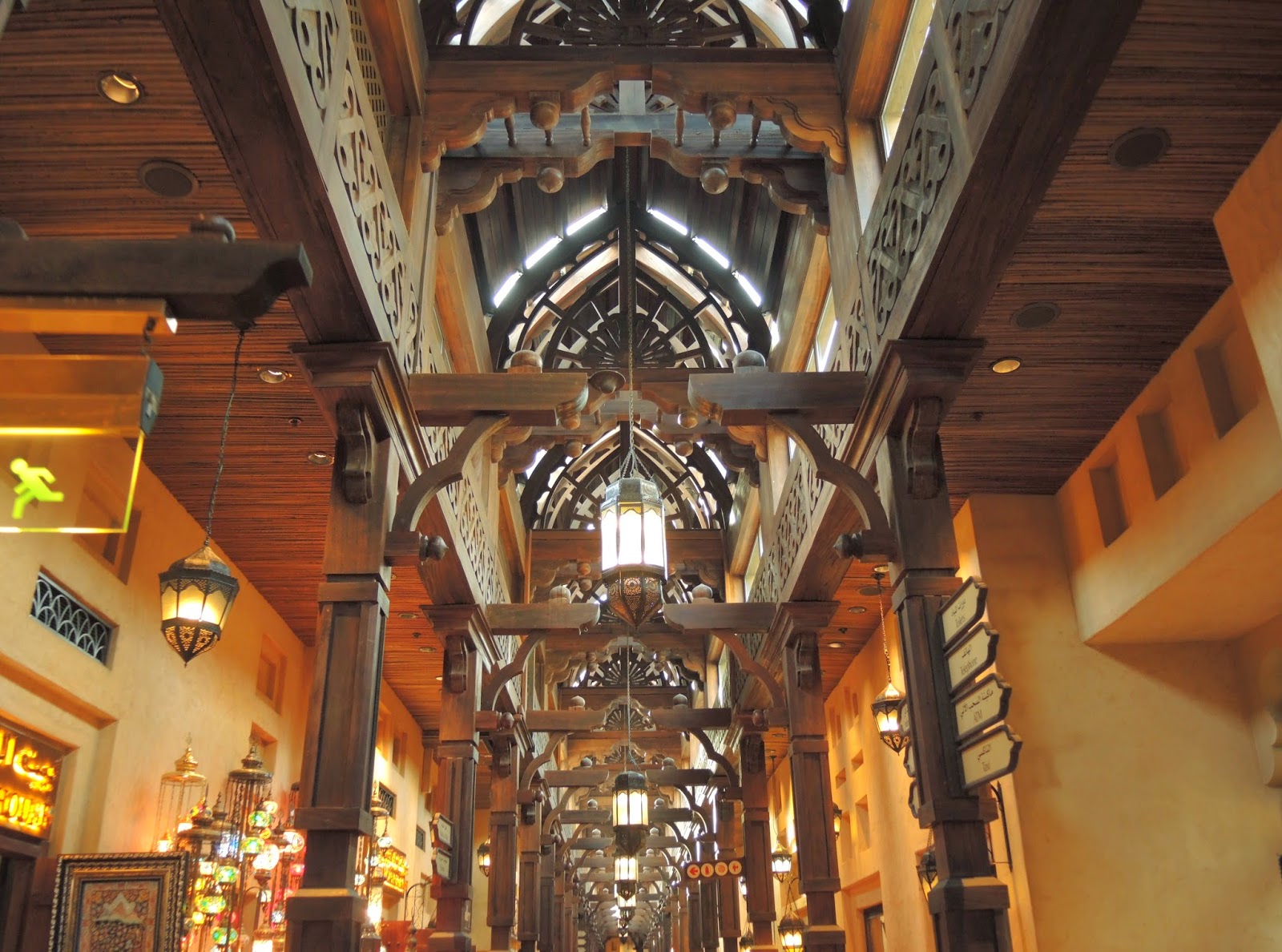 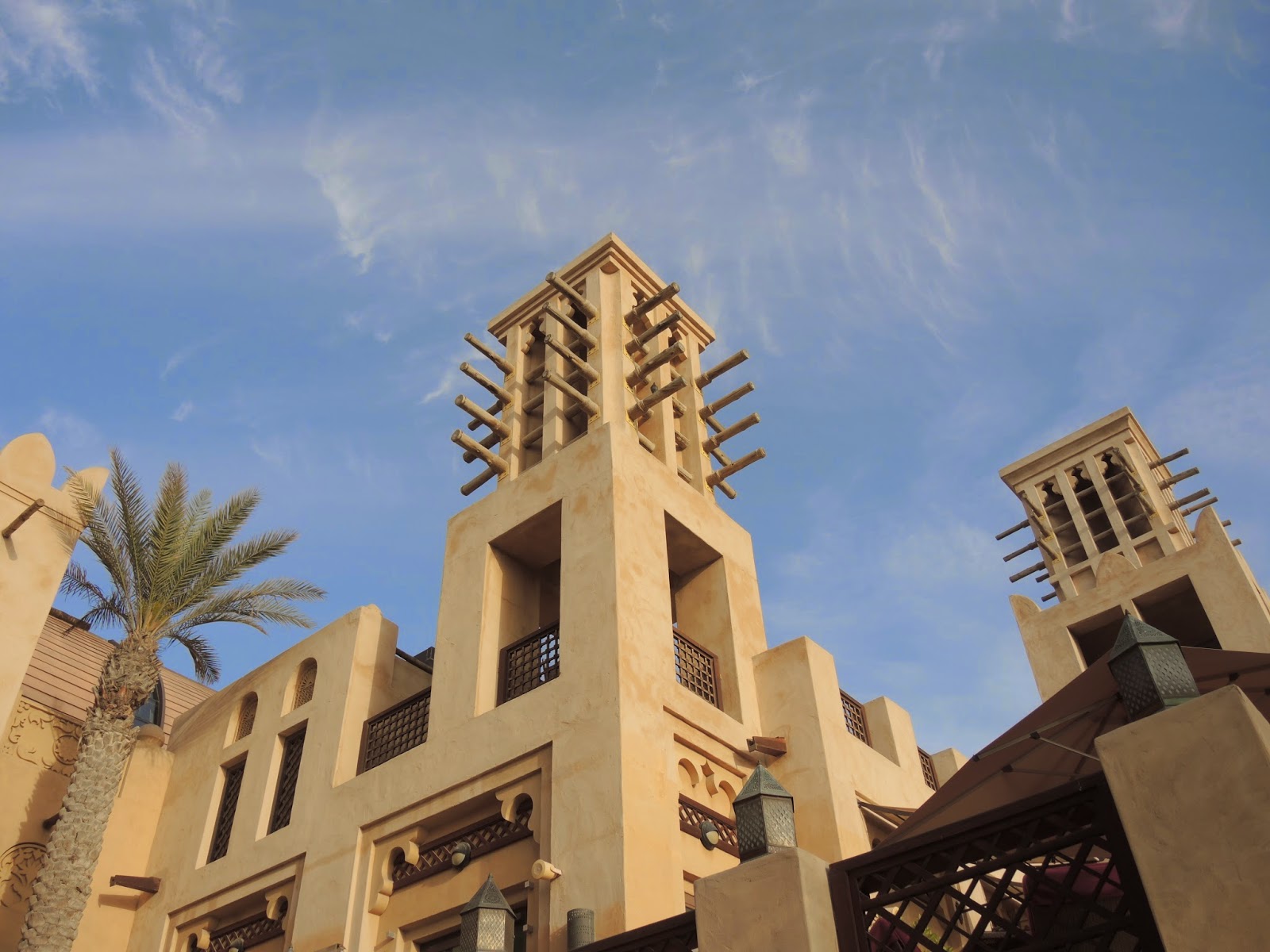 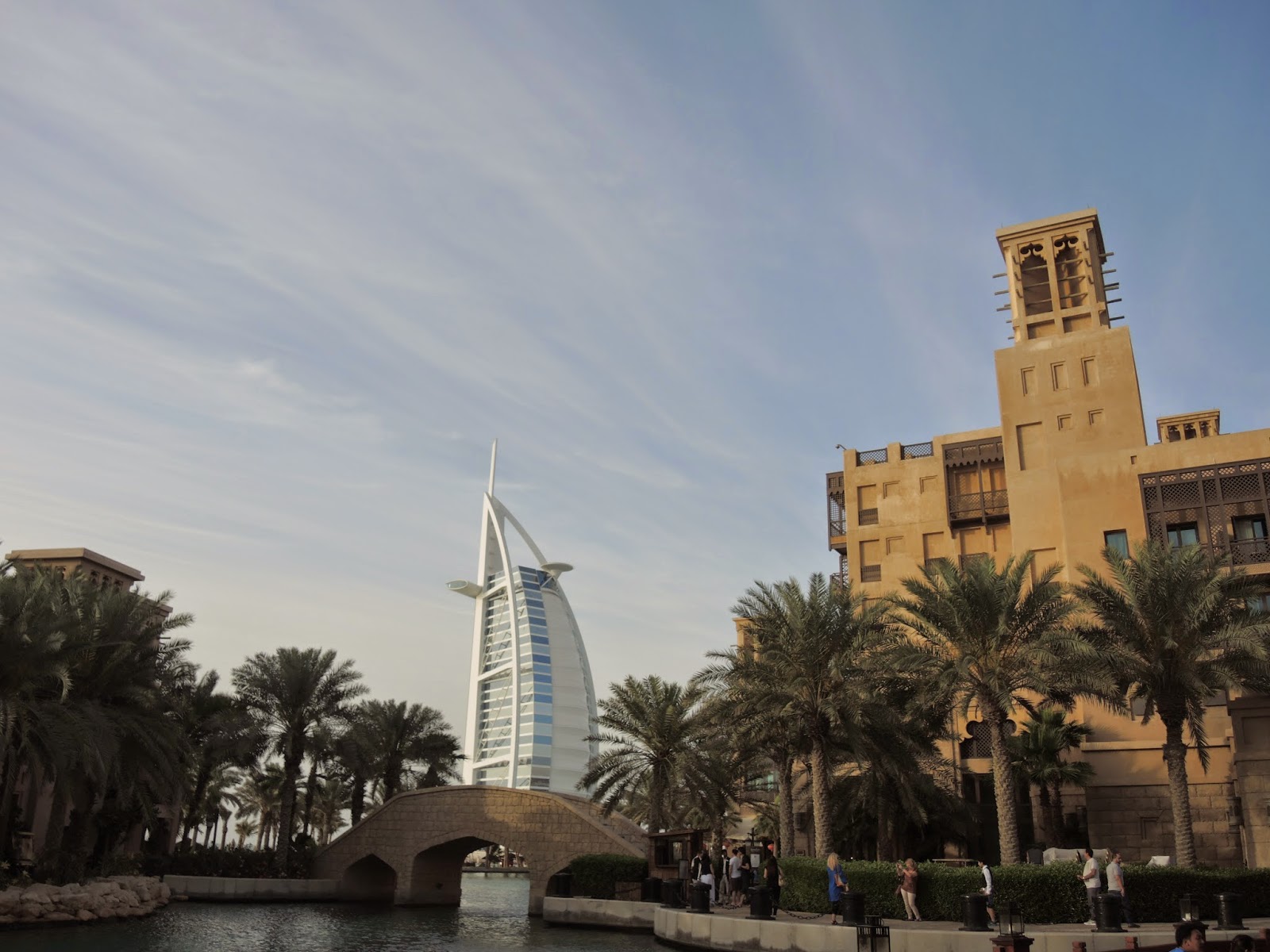 The next day, we went to Dubai Creek which is the old part of an otherwise very new city. The weather wasn’t the best though and we even had a bit of a shower; the second time in our lives that we’ve brought rain to the desert. We could make a living out of this!

We walked around the various souks, which sold a multitude of things from exotic looking herbs and spices to crafted gold, and then got a traditional boat, called an abra, back across the river for the measly sum of 1 Dirham. 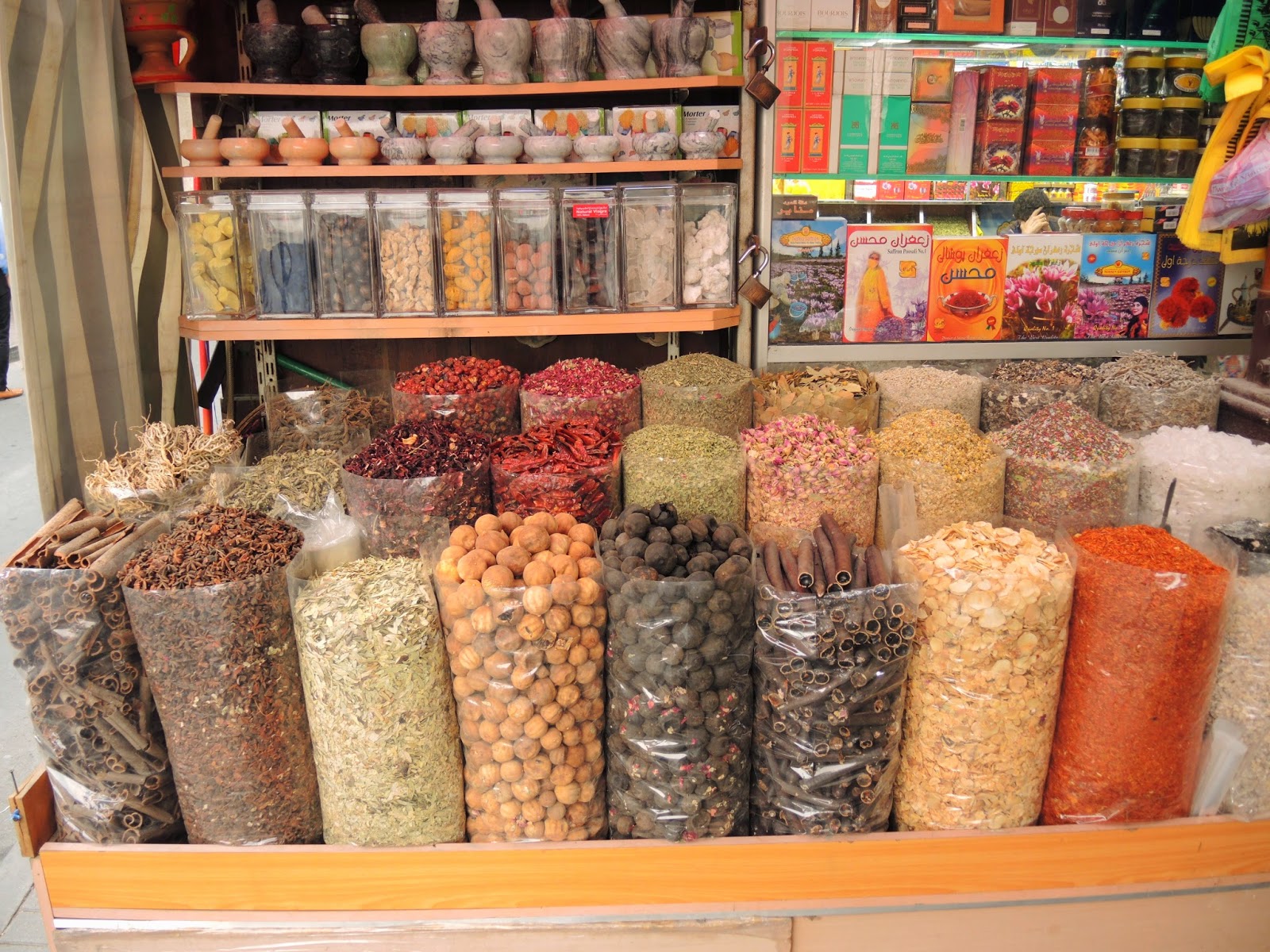 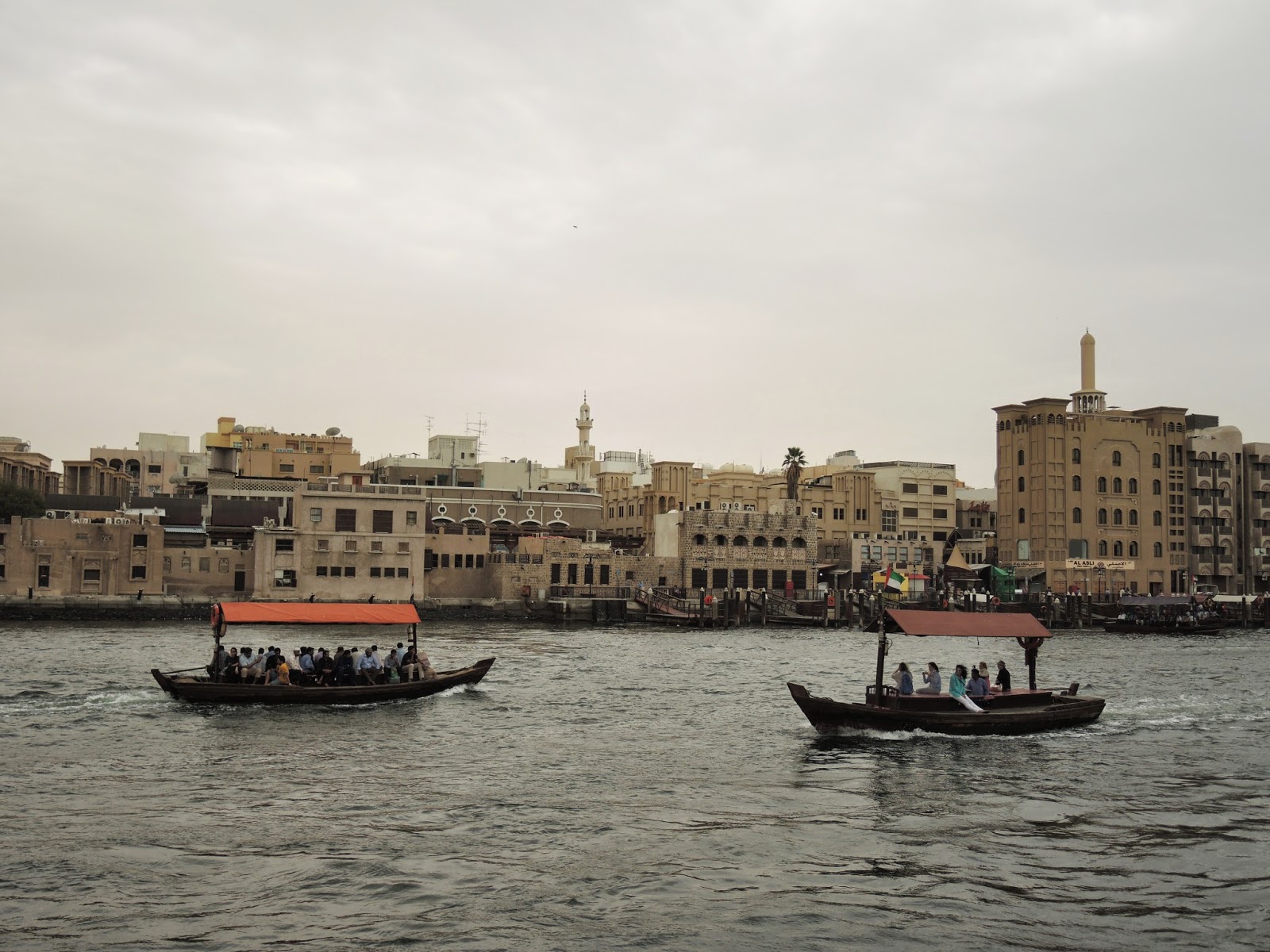 On day 3 we were met with more rain (seriously, are the Irish cursed or something?!), but still went out and about, taking a stroll along The Walk, which is lined with more restaurants and cafes than you could ever eat in. They even had Pizza Company – our absolute favourite from South East Asia, which is obviously where we went for dinner that night. At this stage, we’ve almost been to every single branch they’ve got! We also walked along the beach, looking at the sand sculptures, admiring them in peace which was a strange luxury for us. In most places we’ve been in Asia, people make such sculptures on beaches and then charge you  money to take pictures of them. But that’s another great thing about Dubai – people here have so much money that they don’t even want yours! 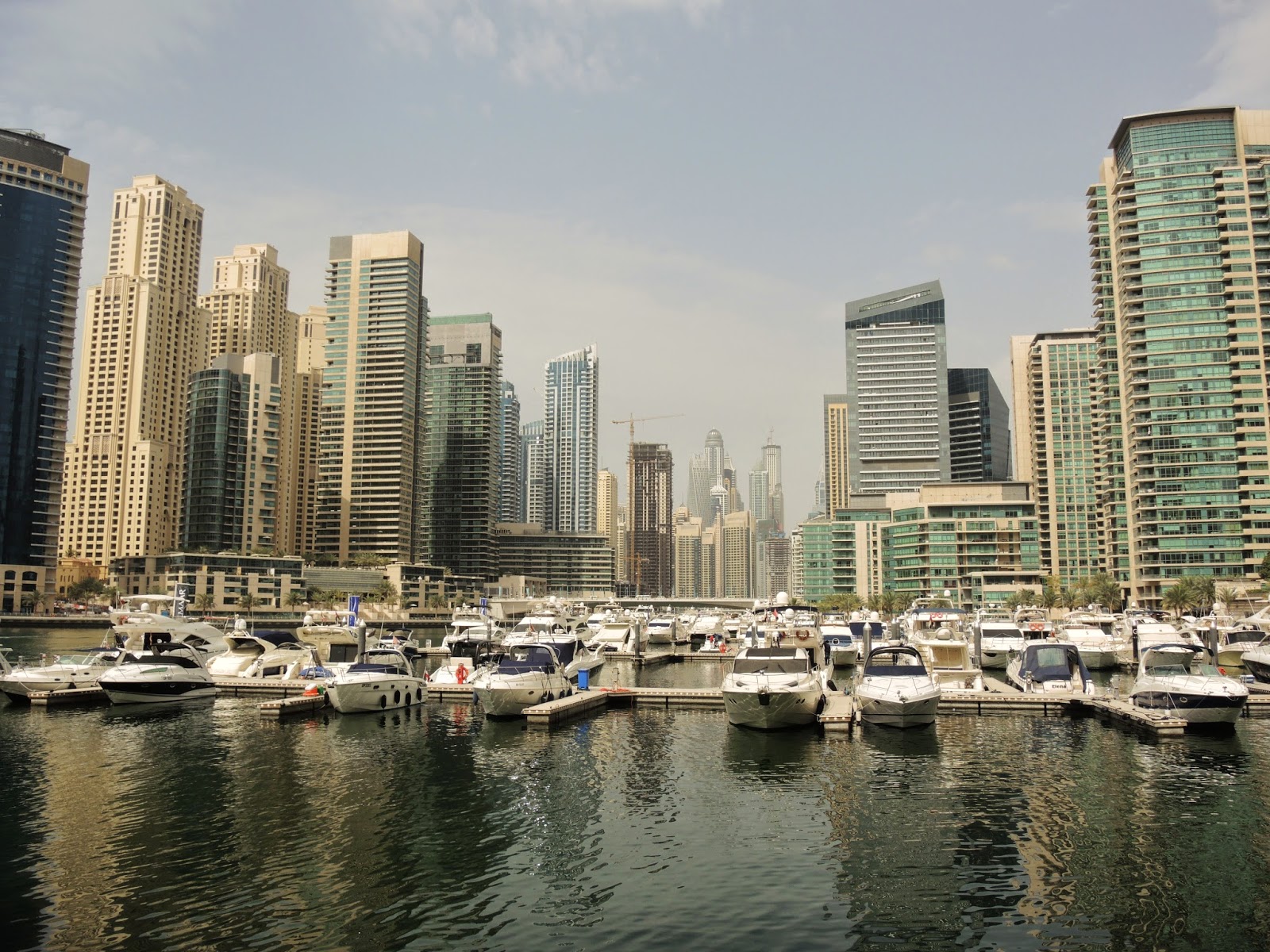 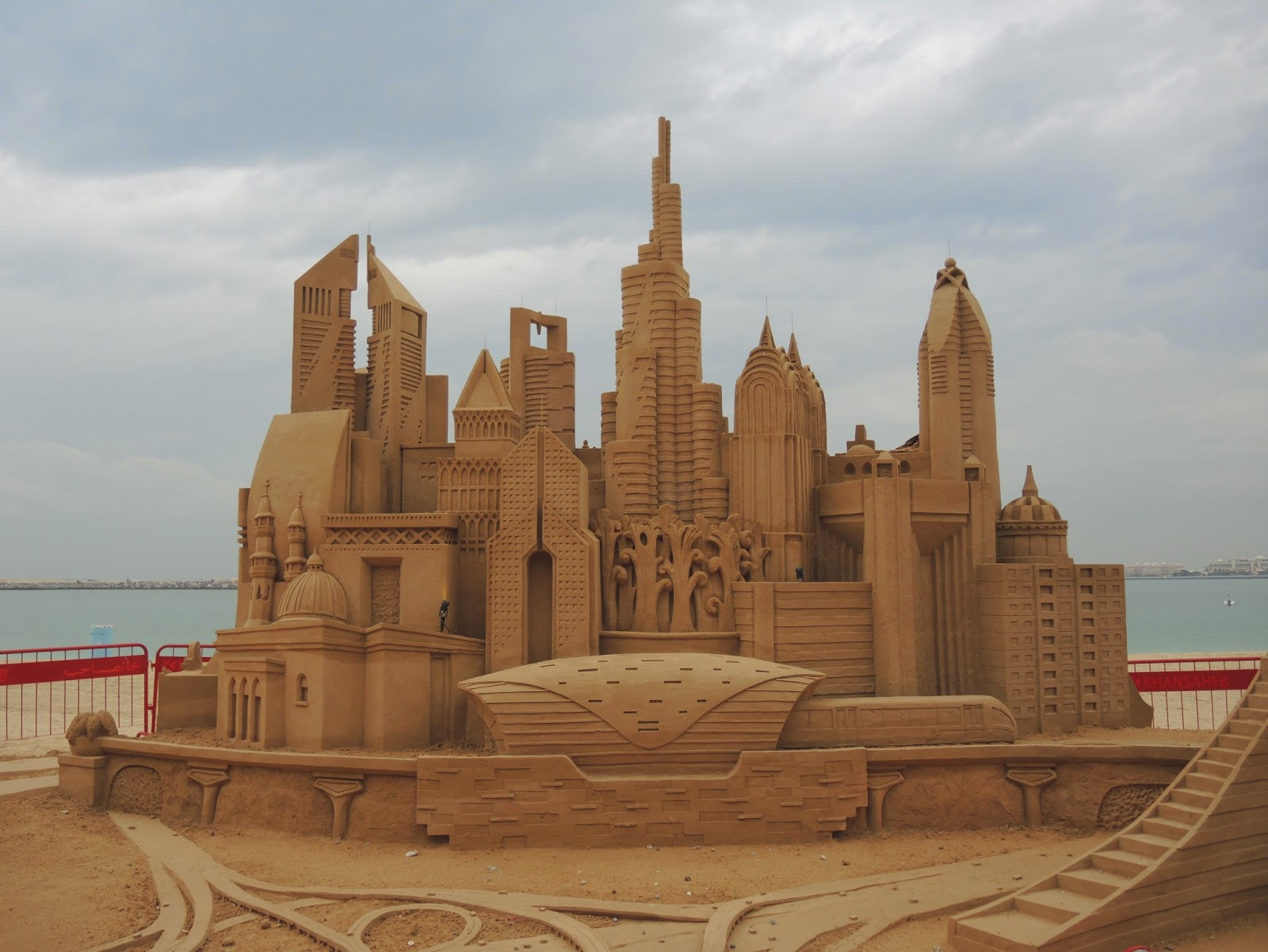 We then rounded off the day with a trip back to Dubai Mall to have a look at the Burj Khalifa lit up against the night sky. We saved actually climbing it until the end of our trip, but both times it was equally beautiful in light and dark, so I suppose in that sense, Arabian nights really are like Arabian days... 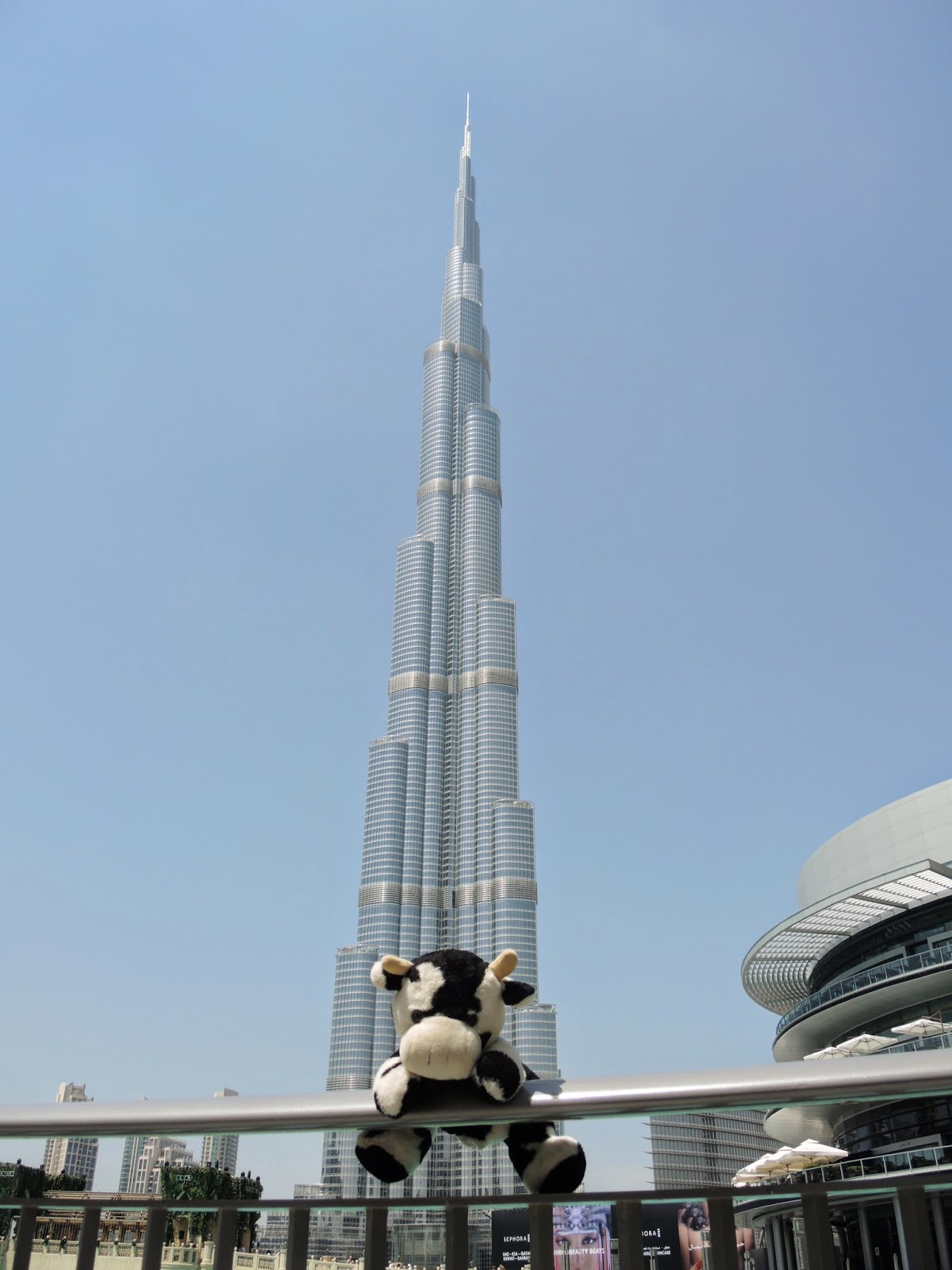 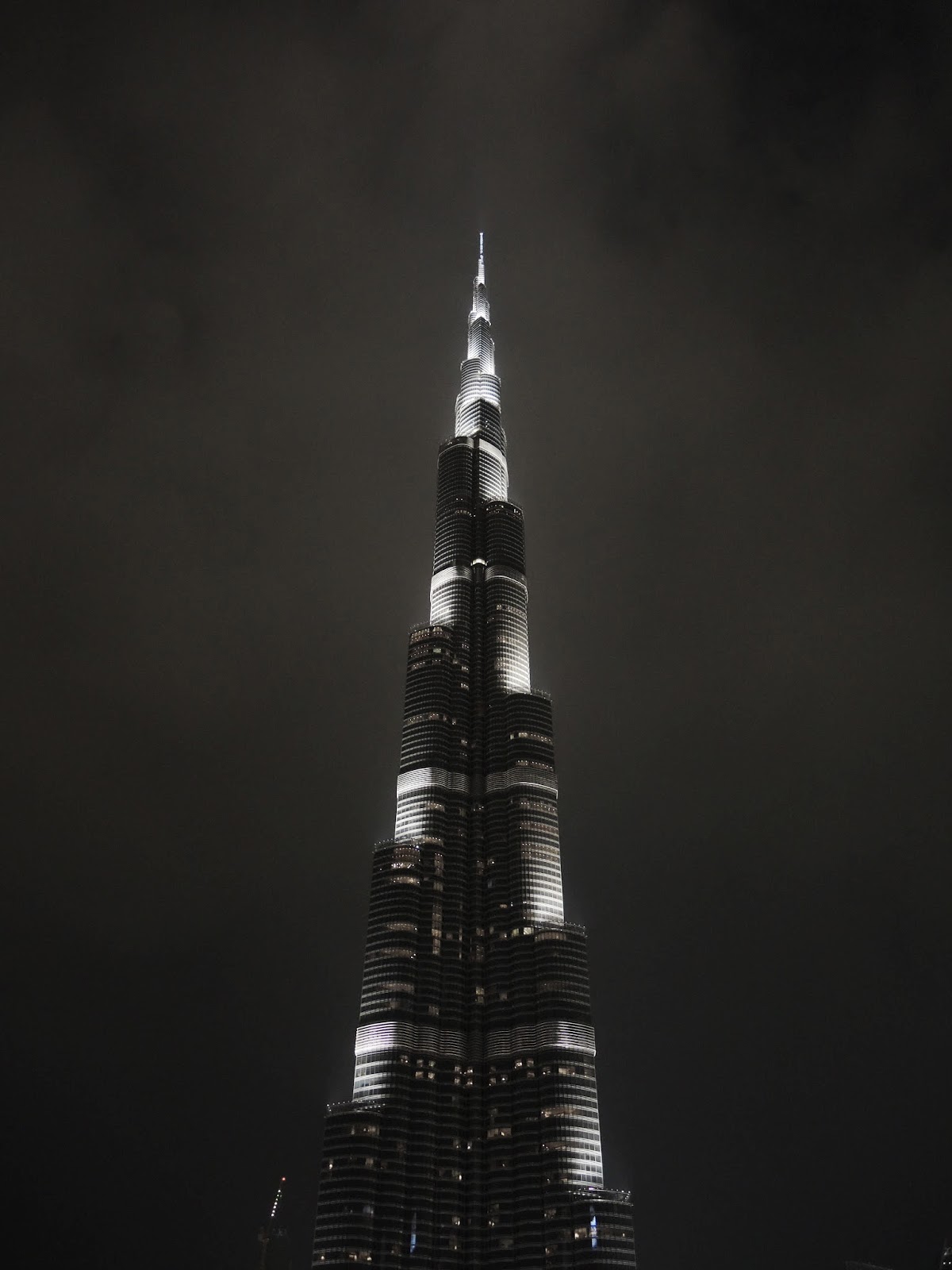 And after scaling these Arabian heights and witnessing some incredible Arabian sights, we went for a few Arabian bites. (Some rhymes that failed to make the list: flying Arabian kites, boarding Arabian flights and wearing Arabian tights).

Dubai in general is just a different world entirely. It's so ridiculously lavish, but done so in a way that you don't feel uncomfortable or unworthy to be here. I guess it's a bit like one big amusement park, and the theme is "look how much money we have!". Even the crows here have a fashion sense! 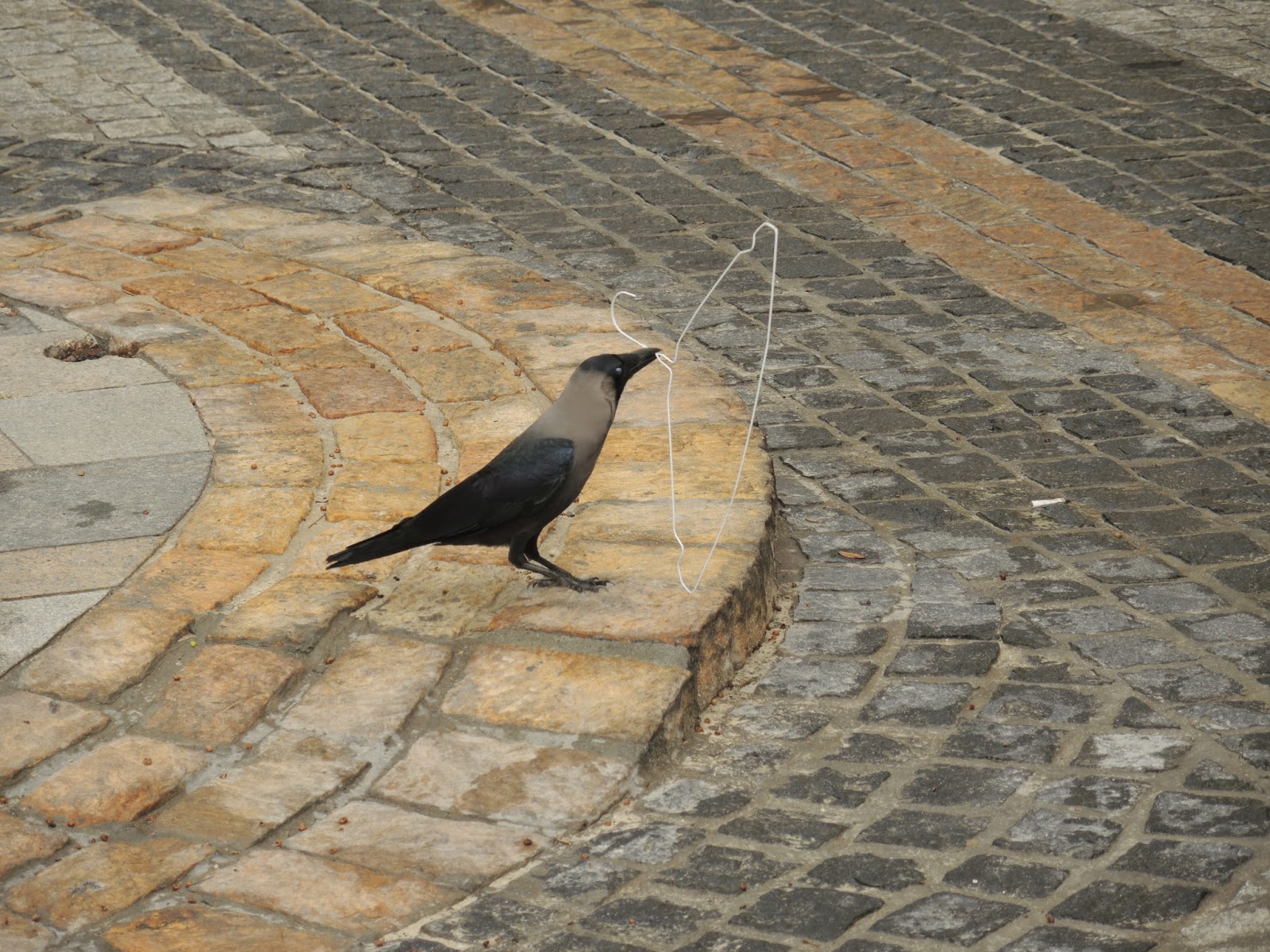 I presume he was just on his way to the dry cleaners. We should hook him up with that goat we saw wearing a shirt in India!

We had a couple of days in Abu Dhabi as well in the middle of our stay, but that's a story for another blog. The final thing we did in Dubai on our second stint here was go on a typical tourist day out in the desert - partaking in some dune bashing, fancy dress, shisha pipes (or 'thank you' pipes as they call them in China) and an Arabian dinner and dance show to round it all off. 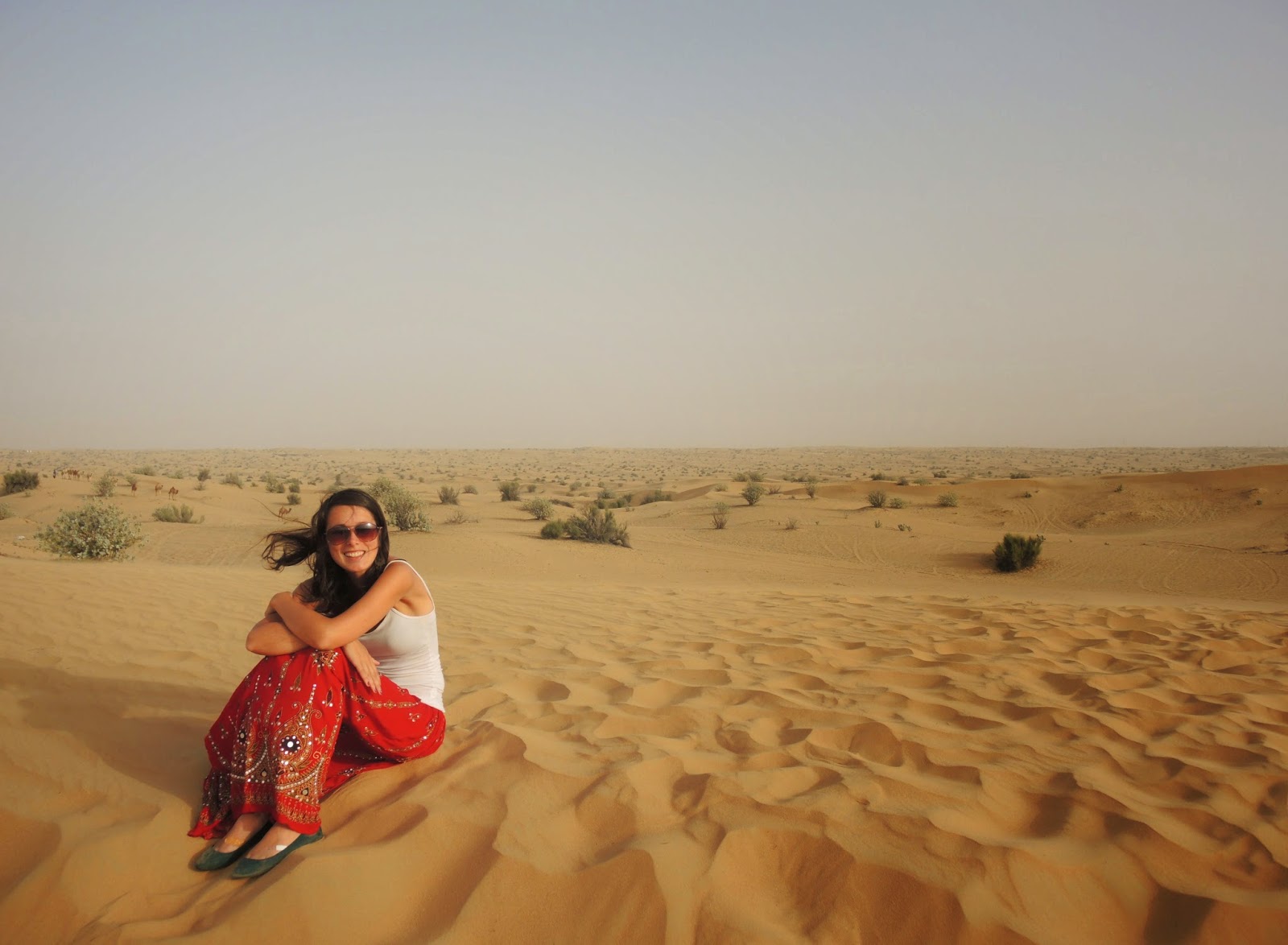 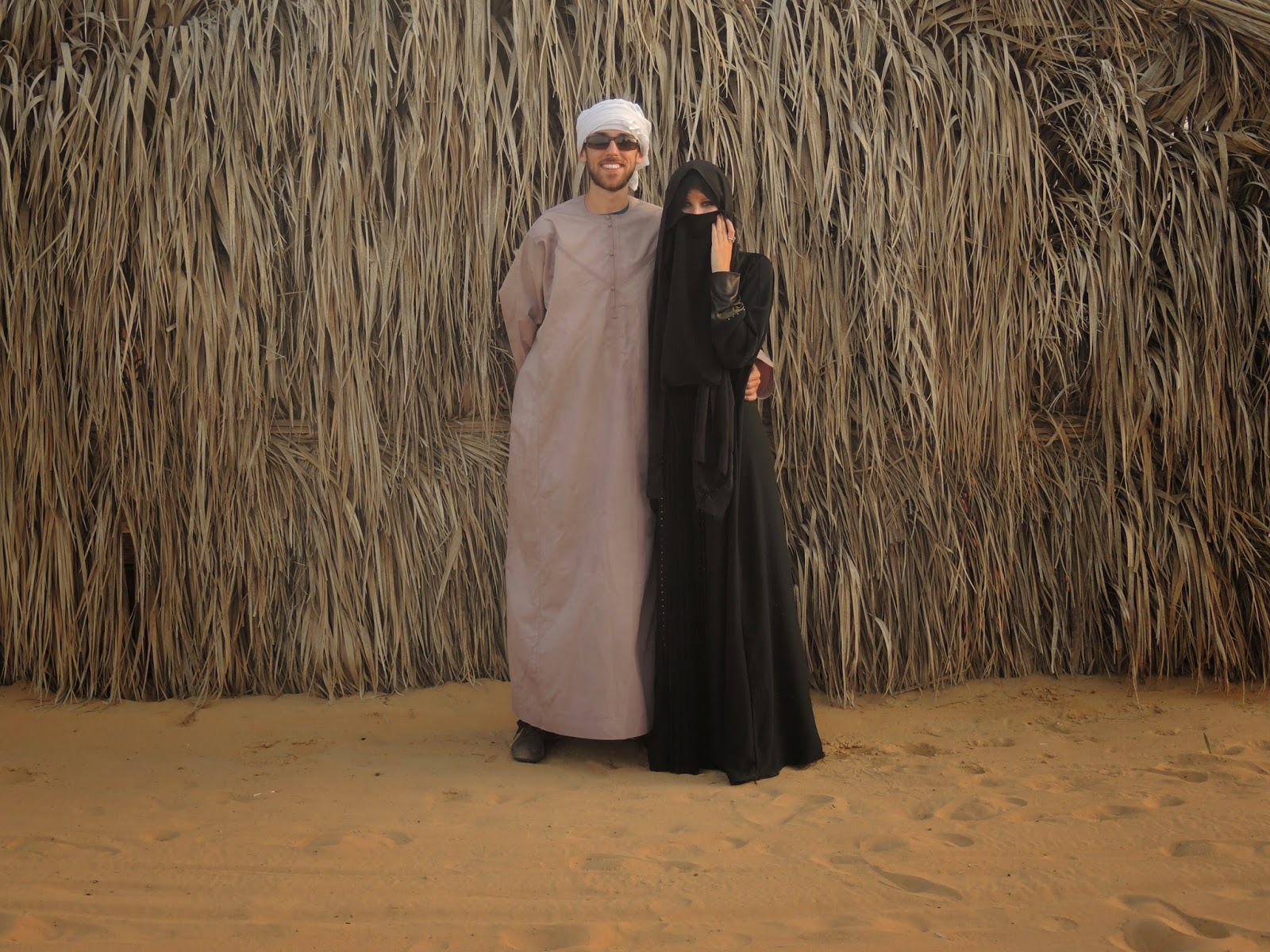 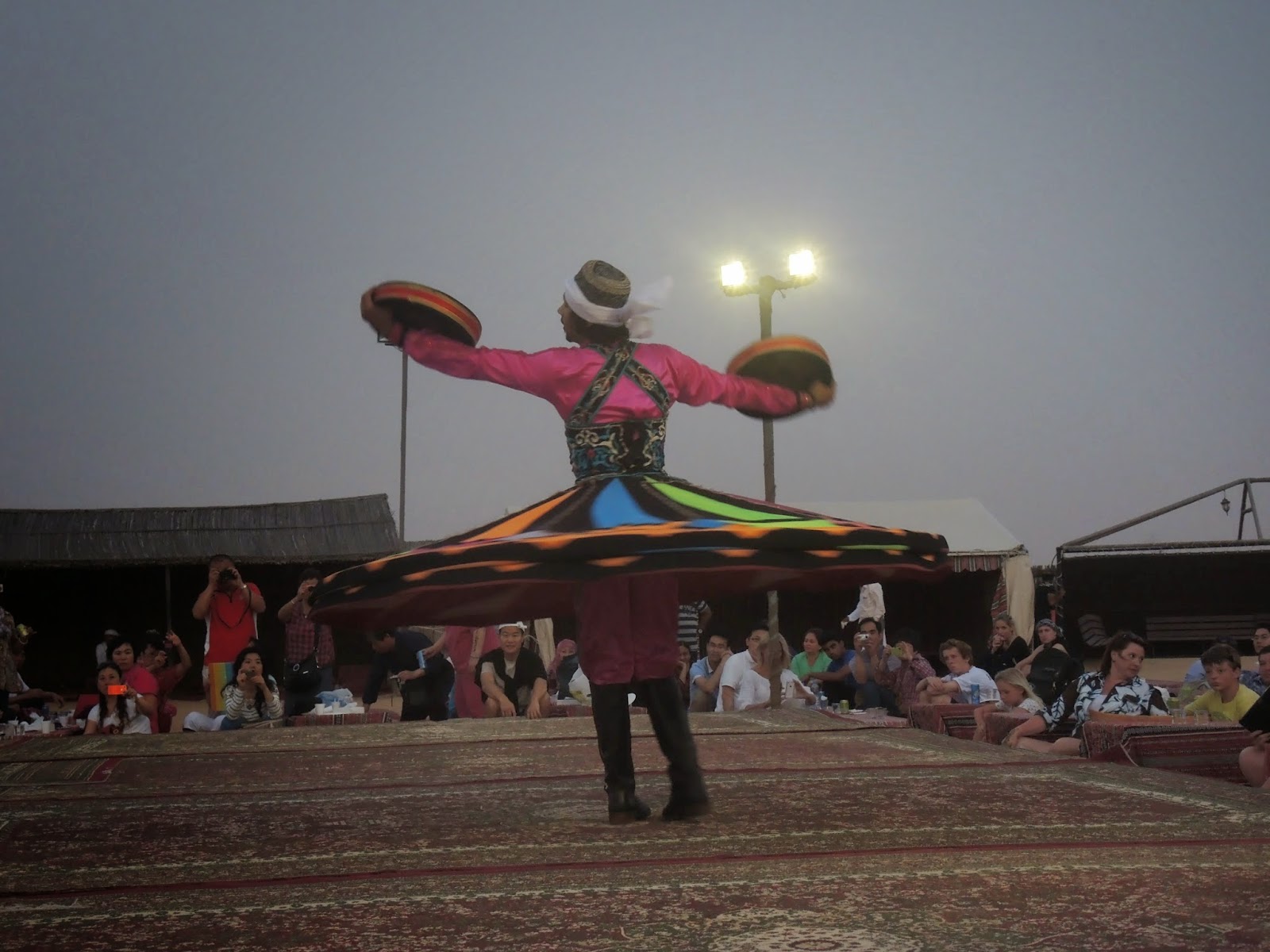 We also made a quick video diary there, if you want a look:

And that was Dubai! We had such a good time here, and special thanks to my cousin Fiona and her family for putting us up while we were in town. Dubai is what it is really. You're not going to come here looking for your typical backpacker experience, but it's a great spot to spend a few days, especially if you pair it up with a stop off in Abu Dhabi (and even more especially if you have loads of money!).

We did manage to pop over to Abu Dhabi ourselves, so we still have one final entry before we eventually returned home to Ireland for good. So brace yourselves, only one more leg in our Am-Asian adventure to come... (for now).
Posted by Mark O'Leary at 9:49 AM