50th post! Ding ding ding! Back on the road again, and back to one of our favourite countries, Indonesia. This time around we stationed ourselves in Sumatra, and more specifically on the island of Samosir in Lake Toba, so basically - an island within a lake, within an island! (There was also a smaller lake on the island, although it's unknown whether or not there was a smaller island within this lake). 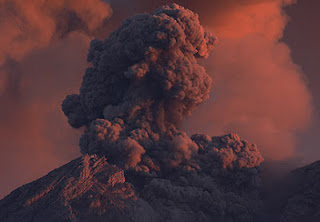 So, we flew in to the city of Medan on December 22nd and spent the night there before getting the bus to Lake Toba the next morning, or at least that was the plan. When we got up that morning, we asked reception to arrange a taxi to take us to the bus station for our trip to Danau Toba. This was all fine anyway, and although our taxi driver didn't have any English, he kept repeating "Danau Toba" and we nodded along, so he obviously knew where we were going. About 10 minutes later, he dropped us at a hotel and pointed inside, so we thought 'maybe they organised for the bus to collect us from here...?'. So, we waited for a while in the lobby of this hotel - no sign of a bus. We asked reception when we were going to be collected - they had no idea what we were talking about. We couldn't understand what the mix up was... After waiting quite a long time (longer than we care to admit), everything suddenly made sense. We finally realised that the hotel we were in was actually called Danau Toba! Ahh...

At that stage, it was too late to catch a bus, so we had to ask reception to arrange a private taxi for the whole 4 hour trip to Toba. Dose! Things like this happen though and in the end, we still arrived in the right place that evening, so it was just a bit of extra money and hassle that it cost us. 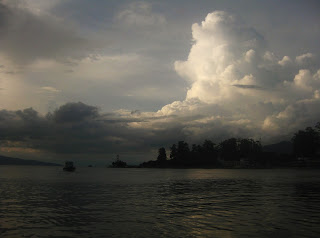 When we were booking accommodation, most of the nice places were already full up as it was the Christmas holidays, so we ended up staying in a place called Romlan Guesthouse, a cheap and... well, I was going to say cheerful, but the owner had a face like a smacked arse for the duration of our stay. So, it was just cheap, and nothing more!

For the first few days, including Christmas Day itself, the weather was pretty dire, so we couldn't do a whole lot. We sat by the water's edge when we could, opened our presents, had a small walk around the area and watched a whole series of The Amazing Race! 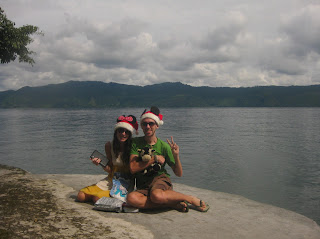 On St. Stephen's Day, the weather cleared up a small bit so we rented a motorbike and went for a spin around the island. But as we were driving along, Aisling suddenly cried out in pain. I pulled over and she had to lie on the ground to keep from fainting. She had picked up a nasty sting on her side, from what we didn't know. It was probably a pretty strange scene for anyone passing by - us pulled up on the side of this quiet country track, Aisling on the ground. In fact, many people stopped thinking there had been an accident!

When I first pulled over, it was just us, but by the time we left, it seemed the whole village had gathered, including one guy selling ice-cream from a bike, and another playing guitar. It was like a mini festival had sprung up around us! It was probably the most interesting thing to happen to that village in quite a while. There were probably pictures of us the in the morning papers!

After maybe 20 minutes, when she was feeling a bit steadier, we travelled down to the local medical centre for some expert advice. 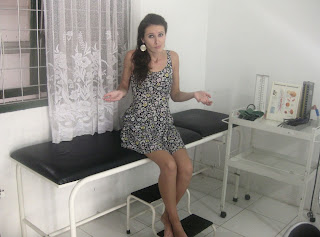 We saw the doctor straight away, as we were actually the only ones there... (I guess not much happens around here).

After taking a look at the mark, she said that it wasn't a sting but a bite, most likely from a "lipan". We obviously didn't know what that meant and she didn't have the English to translate, but it didn't really matter. She gave us some tablets and Ais started to feel a bit better so we continued on for the afternoon.

We did eventually look it up later that evening, just out of curiosity, and eh, this is a lipan: 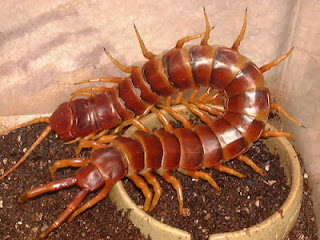 A massive frickin' centipede!!! How does something like that even happen?!

We rented out the same bike for pretty much all of our remaining days, and we even got a bit of sunshine to enjoy! It's by far the best way to see the island and there's very little traffic around so perfect for a rookie like me. We're really after getting into travelling around by motorbike after trying it out for the first time in Sapa last year. 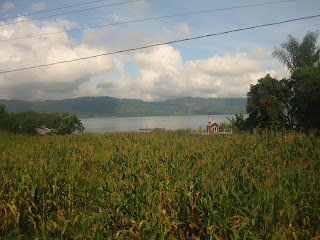 The island itself is far too big to circumnavigate in one day, and there's only really one main road that makes a big loop around the coast, so our choice when exploring was basically - clockwise or anticlockwise. And over the last few days we were able to follow both to see where they led. The scenery was actually surprisingly different each way, changing from lowland fields with scattered villages, to hilly paths overlooking the lake. 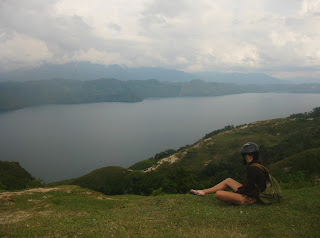 In terms of actual sights or landmarks, there wasn't much at all. We visited a place called "The Stone Chairs" at one point, which are just, as the name suggests, a bunch of old chairs made of stone. And that was about it in terms of actual tourist sites! Samosir Island is actually Christian, which is surprising seeing as Indonesia is a Muslim country (the biggest Muslim country in the world, would you believe!), so there were also plenty of churches to see too, rather than temples and mosques.

There was also this building that looked pretty cool, even though I have no idea what it was. 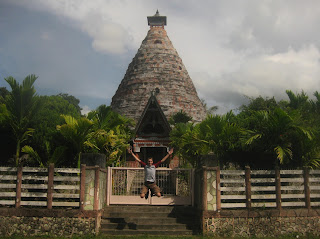 Actually, while we were parked outside the building above, a minibus pulled in and asked could they all take a picture of us! We were only too happy of course and after the picture, they all piled in and drove away again! Now, we've had people ask for our picture before on our travels, but we've never had a bus pull over especially to do it!

As usual, we made a video diary, in fact we made two! In the first one, the surroundings weren't very scenic so we made another one later on, but in the scenic edition, you can't actually hear anything we're saying because it was so windy! So, in the end, I kinda had to splice them together.

And that was the end of Lake Toba! In the end, our stay here was only so-so due to bad weather and substandard accommodation. The island itself was really nice though. We made our way back to Medan (on the proper bus this time!) and stayed the night there once again before returning to HK the next morning, via a short but delightful stop in Penang, where we were greeted by Aisling's friend from home, Denise. 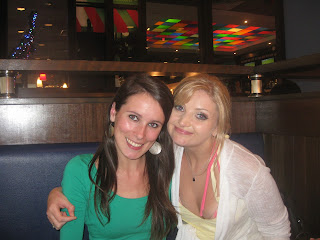 Only one more blog left to write before I'm officially up to date, and that'll be coming some time this week. I have to have it finished by then as we're flying off on our summer holidays next Monday! So, the next entry coming soon - Chinese New Year in Boracay!
Posted by Mark O'Leary at 9:31 AM