Bonus blog! Wooo! I don't usually write entries for single sights like this, but this one definitely calls for an exception to that rule. The Great Wall of China is obviously one of the most recognisable and well-known landmarks in the world. But the problem with visiting a 'wonder' like this, is that it's so famous and so hyped up, that it can't help but to fall short of your preconceived expectations. And to be honest, The Great Wall just wasn't what we had hoped it would be either... 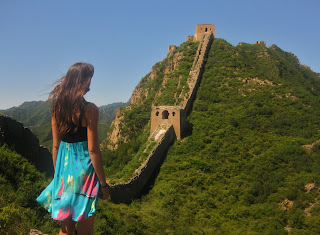 It really was great! We, of course, only saw the tiniest fraction of it, but it's hard not to when the thing dips and dives and zig-zags its way along for over 21,000 km! That's unbelievably over half of the circumference of the planet! To put that into perspective, if it was built in one straight line, it would stretch from Cork (which I believe is the international standard measuring point) all the way to Tokyo... AND BACK AGAIN! And standing on the hills, watching it snake its way across the countryside, it really does look like it just goes on forever. We couldn't get over it. (Neither could the Mongols! Zing!) 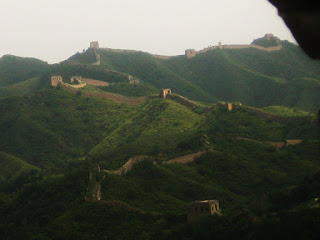 There are, of course, thousands of different places you can go to see the wall. For our visit, we decided to go to a more secluded spot, in a small town called Gubeikou, about three hours from Beijing. It would have been a lot easier for us to just visit the nearest and most popular wall site at Badaling, but after experiencing the Beijing crowds before, we wanted to get as far away as possible! If you're going to travel and spend money to see one of the greatest sights in the world, you might as well do it right, instead of taking the easy way and ending up with something like this: 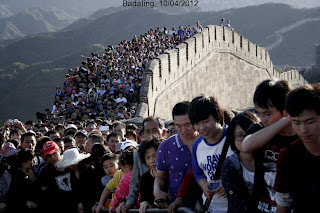 Instead, we had a lovely, quiet, two-day trip to what is referred to as 'The Wild Wall' - one of the few places where the wall is still in its original state. And there couldn't have been more of a contrast with the picture above. On our first day, we didn't pass a single person. It was like we were the only two people in the world. 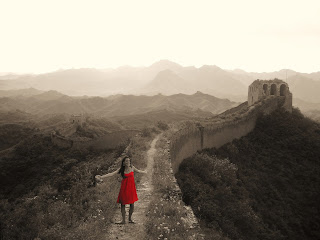 And no foreign invaders either, which just shows, after more than 2,000 years, it's still doing its job!

We set off from Beijing and got a 90 minute bus to a place called Miyun, where we were meant to catch another 90 minute bus to Gubeikou. However, after arriving, we couldn't find the bus stop and, like sharks smelling fresh prey, we were swarmed by a bunch of taxi drivers coming out with the usual crap - "oh no, no bus here, you need to get taxi", or "no, last bus gone, I will take you there" etc. etc. Of course this was all rubbish, so after calling our guesthouse in Gubeikou, we were shown to the right bus stop by their inside man in Miyun, and we were on our way again! 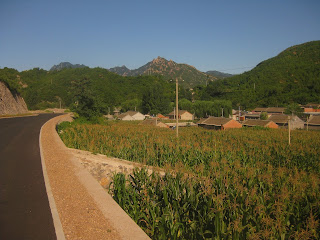 When we arrived in Gubeikou, we were trying to figure out where to go when we met two Spanish girls with the same problem. We both had sets of directions to the guesthouse but they inexplicably pointed us in different directions. We followed their route, as it led downhill, and sure enough, we found the place! I'm sure there's a life lesson in there somewhere...

But when we arrived at the guesthouse, they seemed to have overbooked. This could've posed a huge problem, but instead it couldn't have worked out better, as we were the lucky ones to be upgraded to a fancy, private double room! It wasn't even a double room, we had our own little cabin to ourselves! (They sneakily tried to get us to pay for the upgrade first, but after a very minor refusal, they just gave it to us for free!) 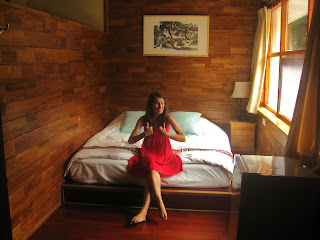 We had lunch with the Spanish girls before heading out alone onto The Wild Wall. We had two days here and two ways to go, so on day 1, we headed east on the 'Winding Dragon Trail'. It was kind of a gloomy day and halfway along we even had to take refuge from a thunderstorm in a watchtower! It was all very atmospheric! 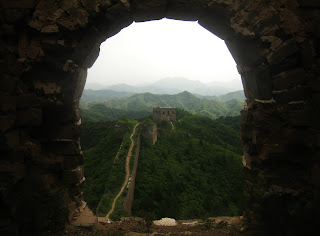 We also took a video diary en route, one along the wall and one in the watchtower - two videos in the one video diary! Unbelievable!

That evening there was massive drama in the guesthouse as one of the Spanish girls was stung by a scorpion on their way back! She was alright in the end but the funny thing was, we had only been talking about scorpions earlier while having lunch with them! Oops!

The next day, we headed off in the other direction, over Crouching Tiger Mountain, although this time we had big blue skies overhead! 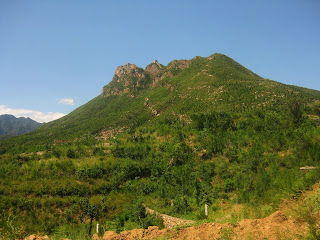 It's hard to tell if this path was much nicer, or if it was just the weather that changed the view for us. Either way, we had another wonderful day! There's not a whole lot to say as we were just walking and climbing for the afternoon. It was great though, it really was! 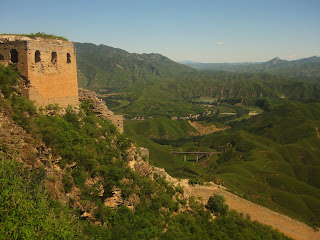 That evening, we got a bus back to Miyun, but this time we knew exactly what we were doing, so we were easily able to navigate our way around and find our way back to Beijing! As I said in the last entry, we had a few more days there, seeing the Forbidden City and Tiananmen Square, before moving on to our last stop of the summer, Shanghai! So, I guess that's where we'll see you next!
Posted by Mark O'Leary at 7:30 AM