And so, we face the final curtain. Our summer adventure has come to an end, but we'll always look back on this trip with many fond memories. We've walked along volcanic craters and lush rice terraces, seen ancient temples and endangered animals, stood high above tropical rainforests and swam down below turquoise seas, and gone from bright, white beaches to deep, dark caves. Four weeks, three countries, two happy campers and one amazing holiday! 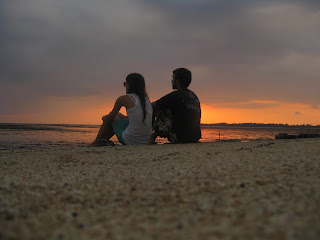 We had a pretty action-packed month away, so we would be forgiven for taking it easy in our final city, but Miri was actually one of our more adventurous destinations. We had three full days here before we flew back to HK, giving us plenty of time to see the city and its surroundings.

Actually, one thing about Malaysia, before I start, they have flags everywhere! No matter where you go in the country, you'll see hundreds of them - along the roadside, hanging from shops, houses, cars, in the cities, in the countryside, just all over the place! And not just national flags, provincial ones too. Malaysian Borneo is split between the provinces of Sabah and Sarawak. If you ever find yourself here and are not sure which side you're on, just look around, you'll be sure to see a flag. 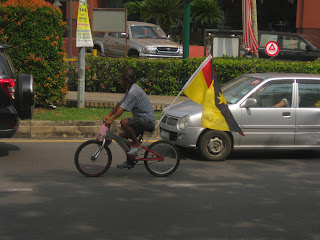 Our first day here was just a nice, relaxing one really, so nothing much of note to report. We arrived in from Mulu on the morning of the 28th, and spent the rest of the afternoon/evening wandering around the city, having a laugh, and doing a bit of shopping too! We also looked up some info for our trip the next day to Lambir Hills National Park.

We arrived there early the next morning, in fact, we were the first ones there! We even had to open the gate! We thought it might be quite busy as it was high-season, so we made a special effort to beat the crowds, but the crowds never came! (They probably heard about the imminent beating they were going to get...) So, we had the whole forest to ourselves! It was lovely!

After about half an hour of walking, we came upon a beautiful waterfall, backed by a leafy, forest canopy. It was like we had stumbled across some undiscovered, jungle oasis. 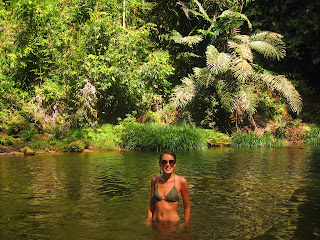 Well, apart from the warning signs... 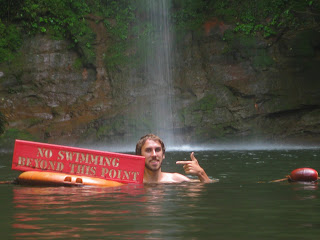 After a nice, refreshing dip, we continued on our way, up to the peak of Bukit Pantu.

Compared to some of the other national parks we've been to here in Borneo, Lambir Hills didn't match up in terms of wildlife, no orangutans or bats or lizards to speak of. One thing it did have though was ants. Millions upon millions of them! In a good way though! They weren't crawling all over us or anything, they were just going along on their merry way (or rather, their Miri way... hohoho!). I'm always fascinated by ants. They're always so organised! (How do they all know what to do?!) So, it was incredible to see so many here. Have a look!

Not only were there millions (possibly even billions) of these tiny ants, but there were also a few giant ones scurrying about the place. Thankfully, we never saw more than two or three of them at a time. 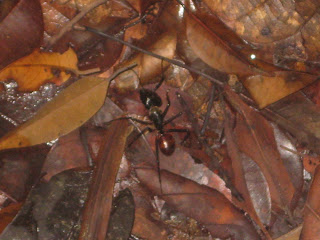 I'm pretty sure if these guys had an army of the same scale, they could easily take over the world...

Eventually, we made it up to the peak of Bukit Pintu, and lazed about up there for a while, taking in the foresty views all around. As you can see, it was a pretty hot day, so after our dip in the waterfall we just wandered about in our swimming togs. Sure why not?! The place wasn't exactly swarming with people. And even if it was, they'd be lucky to see a couple of hot bods like these! 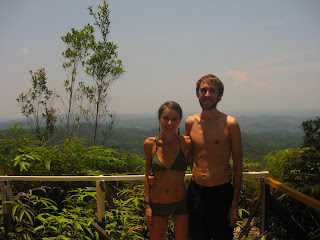 After scaling the peaks, and making it back down to ground level, we headed back to the bus stop. We waited there for a good twenty or thirty minutes, with no sign of anything, but then two guys in a car pulled up offering us a lift to Miri. I guess looking back on it now, it seems a bit dodgy... but we said 'sure! why not?!', and jumped in. (In our defence though, our hostel owner had told us that drivers travelling to Miri often pick up passengers to make a bit of extra money in tips. In fact, the guy in the passenger seat turned out to be just some stranger too.)

The one thing spurring us on that morning, as we climbed up and down Lambir Hills, was the thought of Pizza Hut for dinner! There was one right by our hostel, and we had been talking about going there all day. We asked our mystery taxi driver to drop us off nearby, but when we got to the door, we were told the electricity was gone! What are the odds?! The mixture of hunger and disappointment was excruciating... We did end up going there the next evening though, after another day trip. This time to the Niah Caves. 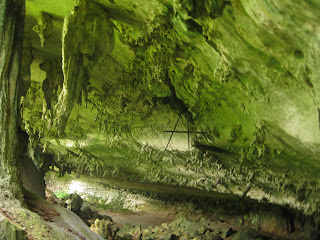 Niah Caves are one of the most famous tourist destinations here in Miri, but considering that we had just seen a lifetime's worth of caves in Mulu a few days beforehand, we weren't really too sure. In the end, we decided to go anyway, and we're glad we did. We had a lovely day out. We arranged through our hostel for a driver to take us there, and he couldn't have been nicer. He even made us a packed lunch!

There was another nice jungle walk leading up, and the caves themselves were definitely worth seeing. It was a very different experience to that of Mulu, where we were guided around the artificially lit caves in big groups. Here, it was just you alone in the deep, deep darkness, armed with nothing more than a flashlight. 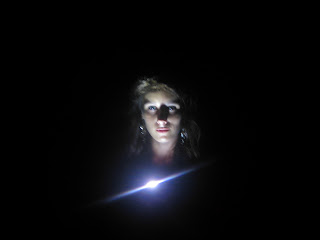 I'm sorry, but isn't that a great photo?! I don't want to sound immodest, bigging up my own work, but isn't it though?!

We journeyed our way through the long and winding cave passages, our torch not even strong enough to see the roof above us. It was exciting though! As you moved into the heart of the caves, without the torchlight there was nothing. Absolute darkness. All in all, the caves were very impressive. Less impressive though were the "cave paintings" we saw at the end of the trail. I use quotation marks as they were little more than smudges on the wall. You wouldn't even notice them if it wasn't for the signs. We were expecting little sketches of men with spears, chasing a yak or something, but this was just rubbish! Still, it didn't take away from the day.

And here's our final video diary to wrap things up!

The next day we flew back to HK, which is where we are now! So, that's that, the end of our summer holidays, written and posted a week before we head away for Christmas in the Philippines! You can probably look forward to reading about that next Easter!