So, we're back once more in this fair nation's capital after our 17 (sorry, 16) day tour around the country. When we pulled up in our little wagon for the last time outside Golden Gobi, the first thing we had to do was bid adieu to Hélène, notre amie Française, who had to dash off immediately to catch her Trans-Siberian train. We also had to wave a sorrowful goodbye to our driver, Baaji, as well as a joyous good riddance to our temporary guide / waste of space, Nami. 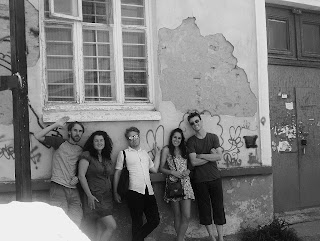 The next thing we did was satisfy a massive urge that had been festering inside us for the past 17 (sorry again, 16) days. Now, Mongolian food is fine and will do the job in a pinch, but this had undoubtedly been the longest period in our lives without our beloved western cuisine. At that point, I was ready to sell my first born child for a big, greasy burger. (Possibly the same reason why the Mongols demolished everything in their paths to get to Europe...). Thankfully, it didn't come to that, and we found an incredible American diner called California Restaurant to satisfy our cravings. And they certainly didn't disappoint. 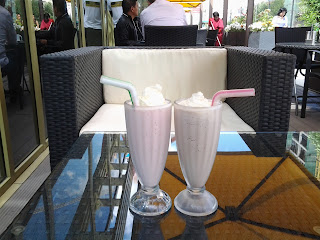 And those milkshakes, my God... they'd certainly bring all the boys to the yard!

Properly recharged, we moved onto the next item on our to-do list. As I mentioned above, we had a small bone to pick with Golden Gobi. Nothing major at all, we're not complainers, but first day we agreed upon a full 17 day tour, with a detailed itinerary for each day. Now, I know mistakes happen and plans change, but we thought it was best to raise the issue anyway with the manager, Ogie, just so everyone was on the same page and everything could be concluded on a positive note. She was a business owner after all, so I was sure she would have been interested in hearing any feedback and setting right any slight wrongs from our trip.

In the end, funny story - it turns out she was a monumental bitch!

We were very polite in raising the issue too; in fact, I never even made a big issue of it, when all of sudden she became incredibly aggressive, saying how shocked and offended she was! We were speechless, and, funnily enough, pretty shocked and offended! We had quite a high opinion of the company from our first stay in UB, and we even had a great time on the tour, up until Una had to leave anyway. That's when the first cracks started to appear, and now this!

(After our confrontation, we looked up some reviews online, and while on the whole they were positive, there was a recurring theme throughout - Everything is all sunshine and smiles, that is until you hand over your money. After that, they wouldn't inconvenience themselves to piss on you if you were on fire.)

Golden Gobi, where our motto is "the customer is always right" "we're always right, and if you don't like it, go fuck yourself! [citation needed]

I'm sorry that I've had to complain so much over these past two entries. I hate having to mention these negative moments when the country itself was an absolute dream, but well, every rose has its thorns. (And if Mongolia is the sweetest rose, I guess that makes Ogie the biggest prick! Zing!)

(Flash forward: Their incompetence finally worked in our favour when we checked out, as they forgot to charge us for the three nights we had spent there before the tour. We noticed this of course, and wanted to point it out, but it would be very rude to tell them how to do their job... karma's a bitch!)

The rest of our time in UB was super anyway. Edward and Braden, our Canadian friends were sticking around too for a few days so we had a great old time! We had seen most of the sights from our first stint here, but we saved the best of all for the return leg. Now, if I told you that this big highlight was a statue, you probably wouldn't be too impressed, and rightly so. But, what about if it was a 40m high statue of the greatest man who ever lived, riding a massive horse!? 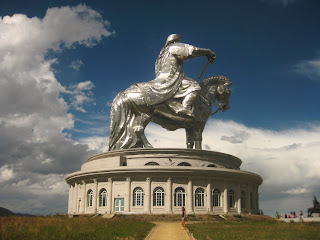 I hope it looks cool in the pictures, cause it was unbelievably cool in real life! As tourist attractions go, it was kind of a strange one, in that it's over 50km outside the city, with absolutely no semblance of public transport. It's almost as if they don't want you to see it. If you want to visit, you need to work for it! Tour companies will of course gladly take you, at a much inflated price. In the end, we just hailed a taxi, and it worked out to be quite cheap between the four of us.

At the site, there are plans to build a huge tourist village all around (might want to sort out the public transport for that one), but for now, there's just the statue which sits (or stands) on top of the museum building. You can also climb right up inside the statue itself and walk out onto the horses head! 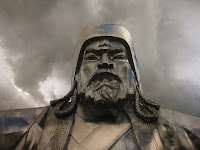 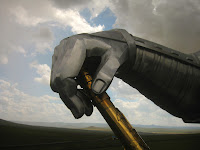 Pretty badass, I think you'll agree. If only there were some way to make it even more awesome, like, I don't know... a four person jumping shot!? 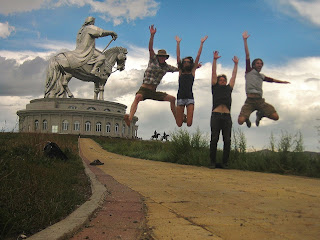 Even the Mongols themselves never pulled off a feat like this!

Another thing worth mentioning about our time in the city - we had the pleasure of visiting (twice), what may be the nicest restaurant I've ever experienced. If you're ever in Ulaanbaatar, for whatever reason, check out Hazara Indian restaurant - it was just flawless in every respect. 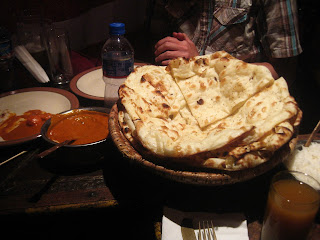 I feel like I'm talking an awful lot about food in this entry, and actually, the restaurants were great in UB. Funnily enough, the only meal we were disappointed with was at a traditional Mongolian place! It just backs up our habit of sticking with what we know!

And I think that's pretty much everything. That night we would be embarking upon a 24 hour long journey down south into China. All that was left was a final farewell to our Canadian brothers, and we had just enough time to make a sneaky video diary too as the train pulled away:

So, Mongolia is done! After only a few days in the country, we thought it might be a contender, but it has well and truly swept all competition aside. And not only does it sit atop the best country stakes, but there's still plenty to see here to warrant a return visit some time in the future. I was going to say that I hope the nomadic way of life here doesn't change in the meantime, but judging by the solar panels and satellite dishes we've seen, I think the nomads are well able to handle the future.
Posted by Mark O'Leary at 8:34 AM