The fourth and final part of our trip through Mongolia is upon us, and it's certainly with a heavy heart that we will be returning to Ulaanbaatar in a few days time. But it's not over yet. Still plenty of things to see, and experiences to, well, experience before we have to call it a day.

So, where were we? At the end of the last installment, we had another day of outdoor activities ahead of us, starting with a hike up and down Khorgo Volcano, before returning again to the green, pristine and serene banks of Terkhiin Tsagaan. It's gonna be tough to leave this all behind... 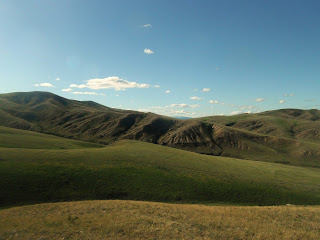 It's like we've been living in a Microsoft Windows wallpaper!

Also, fun fact: Mongolia has the lowest population density of any country in the world with less than two people per square kilometer. To put that into perspective with our current home city, if Mongolia had the same population density as Hong Kong, there would be over 10 billion people in the country! How about that!?

After our two days at the lake, we continued on (via Chuluut Canyon) to the town of Kharakhorum, the former capital of the Mongol Empire. It's quite unlike most imperial capitals however, as the Mongols didn't really build cities, or castles, or forts or anything like that. They just lived, as much of the population still does today, nomadically. In fact, it was built as more of a trade hub and somewhere to store their amassed wealth, rather than a tactical stronghold or seat of government.

Side note: If you want to read more about Genghis Khan and the Mongol Empire, I'd highly recommend "Genghis Khan and the making of the modern world" by Jack Weatherford. Now, I'm not a big reader at all, especially when it comes to history, but it's actually incredibly interesting! Check it out! 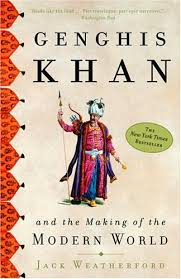 Back in the real world, on the morning of Day 15, we were dealt the worst news of the trip - our guide, Una, had to leave to join another tour and we would be getting a different guide instead. At this stage, there was only two days left to go, but still, we were devastated. And so was she! So, we had to say our teary goodbyes (in which, she said that we were her first ever Irish visitors and we had given an excellent impression of our country! Ireland!). We had the perfect group of four, then the perfect group of seven, and now our little family was being torn apart again... 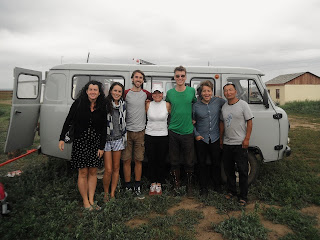 But we tried to be positive about the whole thing. Sure, a few days earlier, when we found out new people would be joining our tour, we feared the worst, but it turned out better than expected. Maybe the same thing would happen here. Maybe our new guide, Nami, would be a vast improvement?!

Now, I don't want to be mean, but... she was a pile of shit. Sorry, I'm really not trying to be harsh, I'm sure she's a lovely girl (questionable), but she just isn't good at her job. She had very good English and was quite knowledgeable about some of the places we visited, but the main problem, and the one that there was just no avoiding - she couldn't cook. And I don't mean, she wasn't the best cook, or I didn't enjoy the dishes she made, no. She absolutely had no idea what she was doing. And for a job where you need to prepare three meals a day for a large group of people, that's pretty important. For our first meal, even the rice was burned to a crisp. Now, I'm sorry, if you can't cook rice, it's time to hand in your Asian card, you're off the team. I'd like to say she'd be more suited to working in a crematorium, but she'd be overqualified!

Ok sorry, back to the tour. That afternoon, we visited Erdene Zuu Khiid, the oldest surviving Buddhist monastery in the country. Originally built in the 16th century from the ruins of the ancient capital, it has been destroyed and rebuilt numerous times in its history. And even when we were there, although it was very nice, there was definitely a feeling of emptiness inside the grounds. 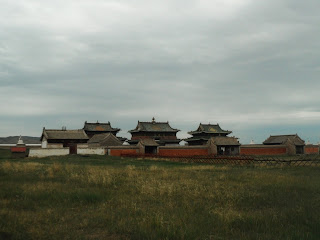 Just like the feeling of emptiness inside our stomachs for the next two days! I'm sorry, I really am.

Afterwards, we went down the road to the Kharakhorum Museum, which was by far the most enjoyable museum I've been to in a long time! Not really because of any of the exhibits... or artifacts... or actually anything related to the museum itself... but the lobby had wifi and we had been without internet for a looong time! We had a lot of catching up to do. I'd say about 90% of our time in the museum was spent outside the museum!

Thankfully, that evening, the nomads we were staying with cooked dinner for us all (so at least we had one proper meal that day!), and we just spent the rest of the night chilling out with the family. 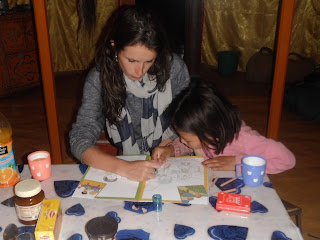 Day 16, our last on the tour (even though we had paid for 17, but that's a different story...), we went for a nice walk in the countryside (it was meant to be a hike in the mountains, but that too is a different story...!), and afterwards made our way to Khustain Nuruu National Park to see the Przewalski horses which, native to Mongolia, are the only truly wild horses left in the world.

And I think that's all there is to report! So, here's the last of our video diaries:

The next morning, instead of having another day of activities, as was the plan, we went back to UB first thing (again, a story for another day), but let's not focus on the negatives for now. We can't let a few minor blips mar, what has been, the most spectacular and memorable adventure we've had since leaving Ireland two and a half years ago. 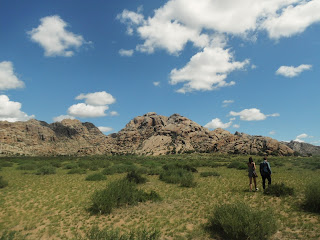 Two and a half weeks of sun, sand and no sea! Of running up hills and sliding down dunes. Of getting up close and personal with camels, yaks, horses and goats - between riding them, eating them and drinking their milk. Even waking up to find them hacked up beside you! And speaking of the different creatures we've encountered, how about waking up on your final morning with this on your tent!? 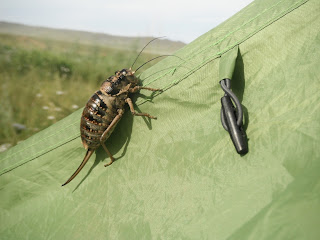 Ah, but we loved every second of it.

Mongolia is like no other place we've visited before in that you could confidently come here with no plan, no route, no to-do list, and still have the most incredible time of your life. For most, if not all, of the cities and countries that we've encountered in the past, you really need to hit the hotspots - what landmarks are there, what buildings, temples, natural wonders, places to avoid etc. - if you want to get the most out of your trip. But all you have to do here is look around and you'll see beauty. There are no nothing places, there are no wrong turns, and there are no real 'things to see'. The only thing to see here is everything.
Posted by Mark O'Leary at 7:20 AM