Welcome to the next installment of our Mongolian tour!

Day 6 – it’s a new dawn, it’s a new day, it’s a new life for meeee…. and we’re riding camels! The day before, our progress was halted by a river separating us from the golden hills in the distance, so we needed to bring in some four-legged reinforcements to take us to the promised land. 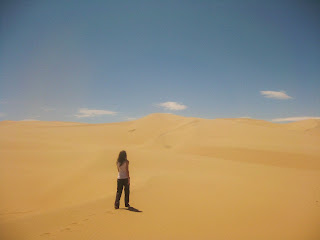 After getting strapped onto our Bactrian buddies (Bactrian camels are the ones with two humps as opposed to the one humped Dromedary – thank you primary school geography for teaching me the rivers of Ireland and the two types of camel!), we set off once more for the elusive sand dunes that were just out of reach yesterday. But now we had the sun on our backs and the ultimate desert vehicles beneath us.

Our two camels, Coco and Camelface, were very well behaved actually. I always imagined camels to be the surliest and least cooperative of all animals, but they were good as gold. I had to feel sorry for them though, not only for carrying us around in the desert heat, but for doing so while being reigned in by a camel-hair harness. That must be the ultimate humiliation – your freedom prevented by a rope made from your own hair! 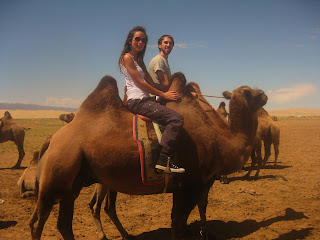 On arrival at the dunes, we dismounted and were given some time to explore – nothing but sand in every direction and it felt great! It was a cool feeling, just looking all around, imagining there was nothing but this; utterly stranded, yet all the while knowing we had our very own oasis at our rear – so, no need for us to look back in anger! Boom, nailed it!

I've also just discovered how to make gifs from our videos! Ultimate fun!

Back at the ger, we learnt how to play an ancient Mongolian game called Shagai. Basically, how it works is you scatter a bunch of ankle bones (taken from sheep and goats) on the floor, and then you have to flick them at other ones that have landed the same way up. I guess it’s kinda like Subbuteo, except instead of the players, there are ankle bones, and instead of the ball… there are more ankle bones... 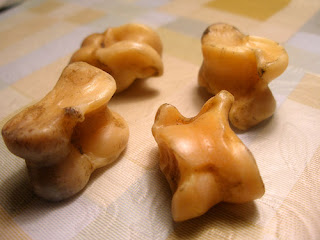 Despite the thoroughly strange sounding concept, it was actually lots of fun and Aisling turned out to be a natural, even taking down a seasoned pro like Baaji. Each family has their own set that they collect over the years from their flock, but we took a short cut and just bought a set for ourselves, so feel free to call in to our place anytime for a friendly game!

They're quite big into sport and games of all kind here actually, with the Naadam trio of archery, wrestling and horse riding being the most popular. But, even in the desert, you'd see people throwing a volleyball around, or even some kids playing basketball on a makeshift hoop - obviously striving to become the next... 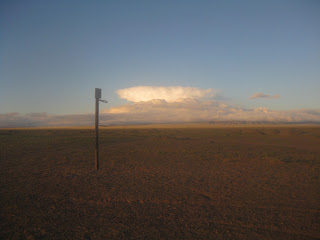 That evening, we waited for it to get a bit cooler before heading to the mammoth dune of Khongoryn Els for sunset. It’s the biggest dune in the Gobi Desert and on arrival we were told that it would take 40 minutes to climb. I scoffed in my head - I mean it wasn't that big, how hard could it be…?

The initial stretch was deceptively easy but as you progressed, the incline gradually increased until it got to the stage where it felt like you were almost climbing vertically. And this wasn't like a steep climb on solid ground either; the sand was loose and soft, just teetering on its angle of repose (civil engineering FTW!) so each step you took caused a mini avalanche beneath your feet as the sand gave way, causing you to slide back with it. You had no choice but to get on all fours and dig in, hoping you could climb up faster than the sand could drag you back down. 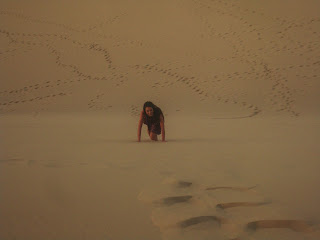 The whole experience felt like trying to climb up a down-escalator, except it’s 200 metres high... and the steps are made of honey.

Having said all of that, it’s a hugely rewarding experience, and all of the aches and pains are soon forgotten when you reach the top, stand up straight once more, and look out over the swirling waves of pink and orange that lie on the other side of the peak. 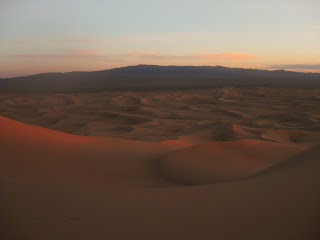 If you are going to attempt this climb, I think sunset is the perfect time to get up there, not just for the view, but also to avoid the heat. It was hard enough doing it in the cool evening; I can’t imagine what it must be like under the hot midday sun.

The views were great and the sense of achievement is hard to beat, but besides all of that, it’s worth the climb anyway, for the slide back down alone! 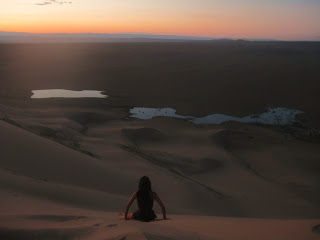 On our return, we popped in to a different nomad family as Baaji had to buy some wild goat horns. His friend back home needed them for the archer’s bow he was making. It’s strange little things like this we’re going to miss when we’re gone… Mongoliaaaa!

The next day was less eventful in terms of activities, although a lot more eventful as a whole. The theme of the day was certainly breakdowns. Thankfully, they were all mechanical rather than mental. The first one came en route to our destination for that day, the Flaming Cliffs – cool name and equally cool location. On the way however, our little Soviet van shuddered to a halt. I don’t know exactly what was wrong but there seemed to be a problem with the fuel pump or something like that, as Baaji ended up having to siphon petrol from the tank into a canister and then seemingly pour it directly into the engine, through some sort of self-made contraption, while driving. Whatever he did, it worked, and despite a few more conk-outs along the way, we eventually made it to a small town where we fixed it properly. Some man!

The towns we've passed through in the Gobi region have all been little more than a single dusty road with some sparsely scattered buildings and maybe a petrol station. In one, we even saw tumbleweeds! No joke! I wasn't even entirely sure they actually existed outside cartoons! 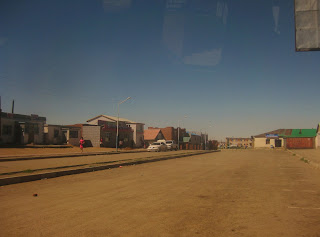 We eventually reached the Flaming Cliffs which are famous, well, first of all, for looking deadly, but mainly for yielding the first ever discovery of dinosaur eggs. The whole Gobi area actually is quite rich in dinosaur fossils and skeletons. And, I’m not entirely sure what I mean here myself, but this place looks exactly like the kind of neighbourhood that I could imagine dinosaurs roaming about in. 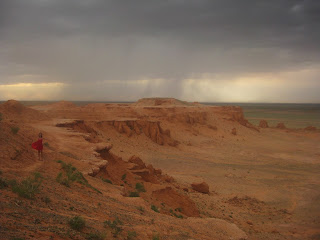 
It’s a shame we didn't have the weather on our side that evening, as the cliffs are meant to glow a fiery red in the sunlight, but I still managed to get a few nice pics, that is until we had our second breakdown of the day, as my poor little camera itself went the way of the dinosaurs. More than likely, a grain of sand had lodged itself inside, as the lens was now stuck in place, unable to move in or out, just giving an anguished grinding noise whenever I tried to turn it on. I was sure I would be able to fix it myself if I could get my hands on a mini screwdriver, but it turns out they’re surprisingly hard to come by in the middle of the desert. I tried in vain all that evening to find and free the obstruction. Even Baaji's mechanical nous couldn't solve the problem this time. I was heartbroken.

The next day, I was brought back to the time when we visited the underground river in Puerto Princesa. I realised that I had left my SD card back at the hostel, so for the whole journey there, a large part of me was hoping that it wouldn't be that impressive so I wouldn't be missing out on any amazing photos. In the end, it was actually awful and today I had the same good fortune (if you could call it that). We were mainly on the road, the weather was terrible and the scenery quite bland by Mongolian standards. We did stop off at an old monastery but it wasn't that memorable, and we've seen plenty of Buddhist monasteries in our time anyway. So, no missed photo opportunities today. The only actual event of note was visiting Baaji's home town, meeting his family and even spending the night in his house. We also had another much needed shower. 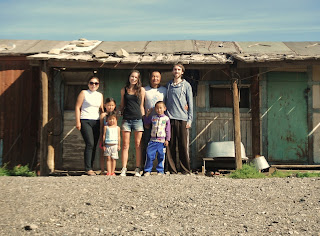 I said before that I was confident I could fix my camera if I had the tools to do it, so that evening, Baaji assembled the greatest minds his little village had to offer - one of whom had a mini screwdriver set - and we got to work dismantling it to the lowest common denominator.

And still it wouldn't work!

My surefire method of taking it apart, blowing on it and putting it back together again had shockingly failed! (On the plus side, our desperate efforts hadn't caused the camera to become even more broken, which at stages looked a distinct possibility). For now, I'd probably have to wait til we got back to UB and find an actual camera repair shop. Until then, we luckily had a spare as Aisling had packed her old camera, and she was kind enough to lend that to me til mine was back in action.

The next day was another big travel one as we completed the switch from desert climate - driving between valleys, over mountains, even right through rivers - to a landscape that wouldn't look out of place in Connemara! 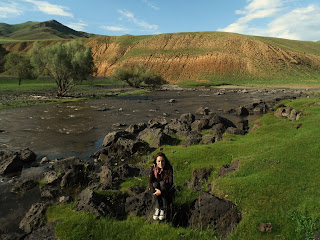 Here, on the banks of Orkhon River was where we would be for the next two days, and also the latest location for our video diary!

Unfortunately, along with the Irish landscape, also came the Irish climate i.e. cold and wet. The nights were especially chilly. Even with a full set of warm clothes under the sleeping bag, and a fire lighting in our ger, we were still shivering. Hard to believe that we were riding camels a few short days ago...
Posted by Mark O'Leary at 5:42 AM