And we're back, as Day 10 picks up where Day 9 ended, on the banks of the Orkhon River. Unfortunately, the weather also picked up where it left off, but after a gloomy morning, the skies cleared up long enough for us to go on a horse ride across the open terrain. The Mongols were, of course, among the fiercest warriors of all time, spending practically their whole lives on horseback, conquering everything that lay before them, so it was nice to get in touch with the history of the land in this way.

And that afternoon, as we got ourselves saddled up, we could feel the spirit of Genghis Khan coursing through our veins, inspiring us on our fearless gallop into the wild! Well, no... maybe more of a leisurely trot... around the nearby fields... led by a young girl... 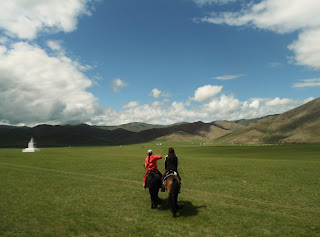 I guess every budding Mongol warrior has to start somewhere, right?!

When we had finished our little outing, we were once again forced back inside by the weather, and sadly, that's where we were confined for the rest of the evening as the rain failed to let up. But we never let it dampen our spirits as we continued to embrace the customs and culture of our adopted homeland, by watching Bring It On. (If there's one thing I know about the Mongols, it's their love of teen cheerleading movies. Maybe if they had danced more and killed less, they'd have a better reputation. Just saying...) 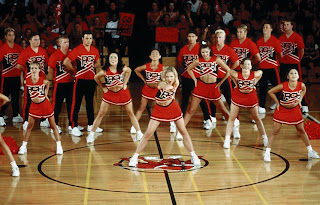 The next morning, we were up and off again down the road, although with the new dawn came some bad news - our fantastic foursome was to become an imperfect sevensome, as three new people would be joining our tour. In fairness, I guess we had been very lucky up to that point, having the whole tour to ourselves for 10 full days, but even Una and Baaji seemed a bit disappointed that there would be new people coming to disrupt our harmonious family.

That afternoon, we landed at a natural hot spring, which was probably the most crowded place we've been since leaving UB, with a host of tourist gers, not to mention a few actual buildings! I'd imagine this is the closest thing you'll get to a tourist camp in Mongolia. It was so busy in fact that we were originally meant to stay in one of the gers, but instead had to pitch our tents outside the park grounds. Ah well, life could be worse... 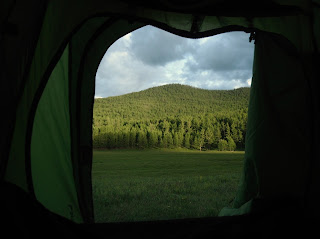 The hot springs themselves actually weren't that crowded and offered a nice relaxing break. And the best part of all, hot springs meant hot showers, something we've really come to appreciate on this tour. So, refreshed and rejuvenated, we bedded down for the night; the last one we would spend alone for quite some time...

And the next morning, the dreaded moment arrived as we were introduced to our new groupmates. On a tour like this, there's no escape so we really feared the worst and would have gladly settled for the mediocre, but instead, being completely honest, we couldn't have wished for a better result! In Braden and Edward (two Canadian guys) and Hélène (a French girl), we had really lucked into a terrific little group for ourselves (and if they are tuning in, read as: "a gerrific little group"). 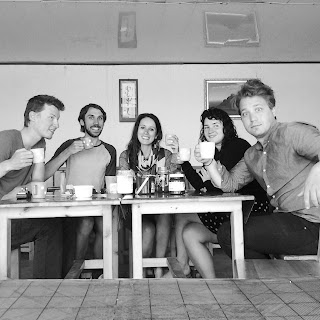 And there was even more good news to come that day! Or rather, the reversal of bad news! One disappointing moment from the tour so far was finding out that we wouldn't get to see a Naadam Festival, as the town we were due to pass through had held it early this year. But that morning, Una got a phone call informing her that another nearby town were currently celebrating their Naadam, so we would get to witness it after all!

Naadam is basically like mini Olympics held every year in each town or district, where participants battle it out in three traditional Mongolian sports - wrestling, archery and horse racing. We only got to see the first two, but it was a really great experience. The wrestling in particular was fun to watch, and they had all of these little rituals for the winners and losers - putting on special hats, doing the "eagle dance" around a pole, throwing a handful of curd into the air - you know, the usual... 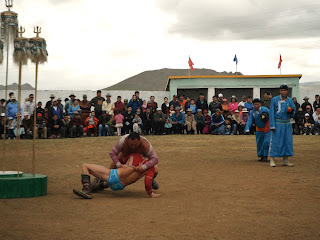 And not a steel chair or turnbuckle in sight! You call this wrestling?!

Set up outside the arena walls, there was also like a little county fair going on, with hot food, market stalls, fairground games, the whole shebang! Una even treated us to a round of khuushuur for lunch; a kind of Mongolian fried meat pocket, which were delicious! All in all, it was a great little day out, fun for all the family! 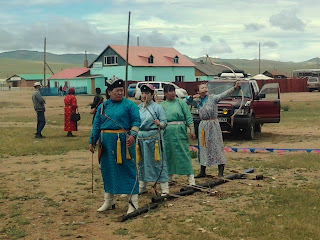 We finished the day at Terkhiin Tsagaan, or, White Lake, which would be our base for the next two days. As I said before, I don't mind the travelling (and as Mongolia is so big, long journeys are part and parcel of seeing anything here), but it was nice to have somewhere to set up shop for a while. Especially when it was somewhere as beautiful as this. 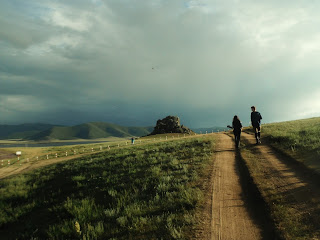 That evening was just spent settling into our new surroundings and our new group; singing songs, telling stories and generally having the bantz.

The next morning, the three lads went for a horse ride while we just took a walk over the hills, (we had already achieved our horse riding badge with flying colours!), making a video diary in the process:

And that brings us into the final furlong of our Mongolian adventure! Only one more entry to go from our trip of a lifetime. Don't forget to tune in next time to see how the whole thing ends. I'm sure you can hardly contain yourselves!
Posted by Mark O'Leary at 5:34 AM