Last blog of the summer and another new country! Uruguay marks Aisling's 60th and my 57th country visited, but it's also a first for us. We've entered new lands by plane, train, bus, car, taxi, but surprisingly, never by boat. Uruguay is positioned directly across La Plata from Buenos Aires, so all it takes is an hour long ferry and you're in the town of Colonia del Sacramento. And that's exactly what we did! 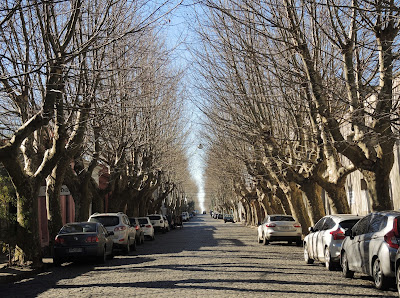 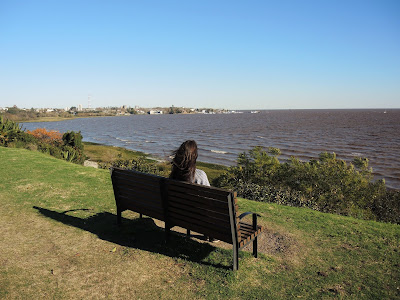 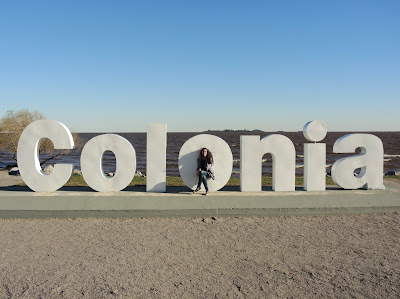 Edit: I just checked back over my previous blogs to confirm this, but it turns out we also got a ferry from Malaysia into Brunei, so that opening paragraph is utterly worthless. Do not read it.

As the name suggests, Colonia del Sacramento is an old, Spanish, colonial town, and so, quite different to all of the other destinations we've visited this summer. And it was lovely! We only spent a day here, which is all you need really, but it's a very nice place just to walk around. It's by the sea, there's a cobbled-stoned, old town with original city walls, there's a nice walkway along the coast; it was just a pleasant place to spend the day. 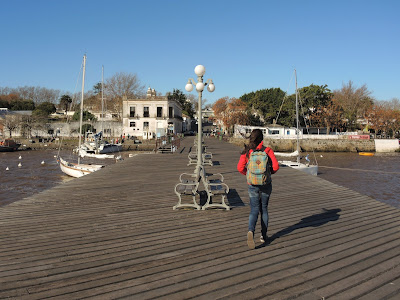 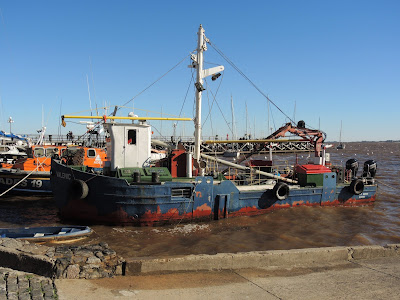 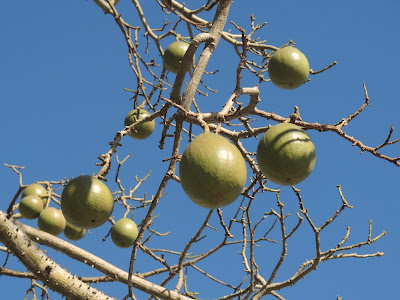 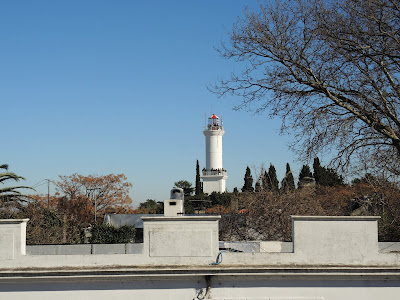 There was also the ruins of an old bullfighting ring in the north of the town, which is about an hour's stroll from the centre. 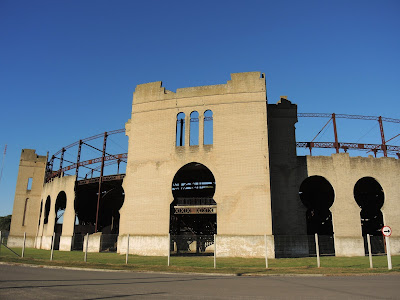 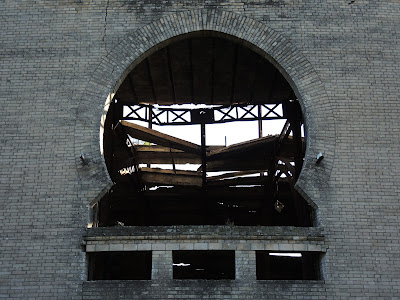 And I know I'm repeating words, but Uruguay as a whole was just... pleasant. That's the best way to describe it. It didn't have the wow factor of Argentina, or the mediocrity of Paraguay, we just had a very nice time, with no major occurrences. Unfortunately, a "very nice time" doesn't make for the best blog post. I guess this summer just proves that nice guays finish last.

After Colonia, we got a bus to the capital, Montevideo, and coincidentally, we were staying on "18 de Julio Avenue", on the 18th of July. Streets and plazas all over South America seem to be named after dates (that, or Irish immigrants), which is something I haven't really seen anywhere else in the world.

We spent a day in Montevideo, and I liked it a lot. Similar to Colonia, it was by the sea, so you could walk along the water side, and the city itself had a positive vibe to it too, with nice buildings, more street art, and couples dancing in the park. 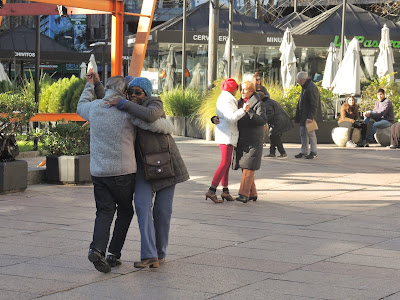 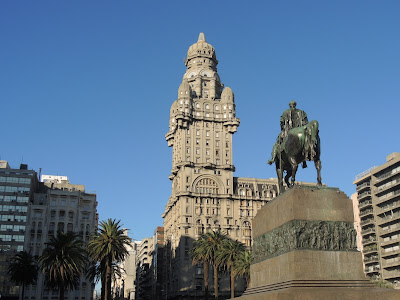 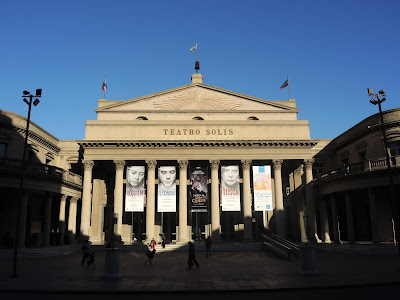 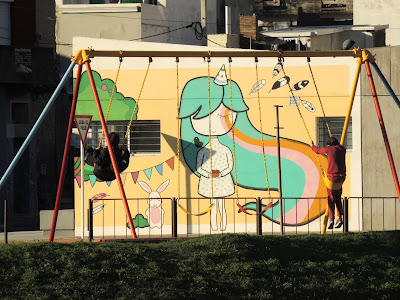 The final of our three stops in Uruguay was Punta del Este, the biggest tourist hotspot in the country, with people even coming from Argentina and Brazil to sample its beaches. Luckily for us, seeing as it was winter here, it wasn't that crowded at all. Though having said that, it only takes a handful of people to ruin a photo... 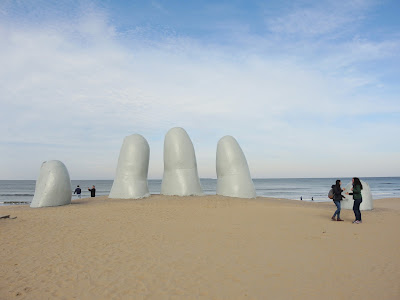 This is probably my second biggest travel pet peeve (after people who recline their seats on planes). It's people who stand in front of tourist sights. I have no problem with people jumping in to get their photo taken, but it's those who just stand in the way, oblivious to the others around them. Or run in to get a picture and then don't move out of the way after it's taken. Or those who spend 10 minutes getting pictures taken in every pose from every angle! Let's just all take a turn, get a good photo, and go home. 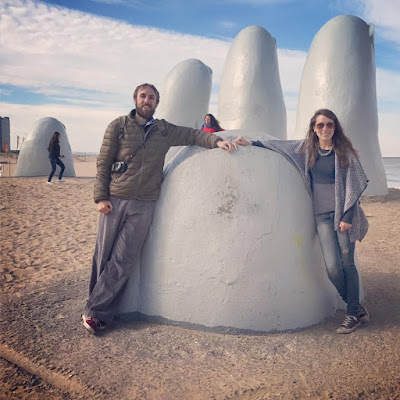 Imagine what it must be like in the summer! 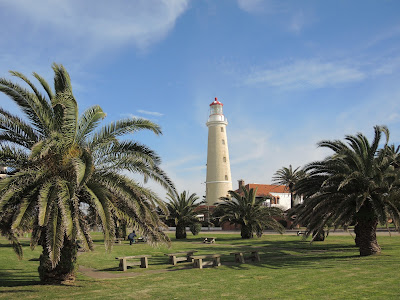 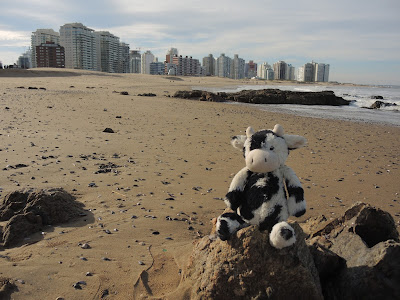 So, that was Uruguay, best summed up as 'unspectacularly likeable'. As I mentioned, it's only an hour from Buenos Aires, so definitely worth a few days if you're in the area.

And here's our video diary from Punta del Este too (we never did make a Monte-video diary!)

And that was also that for our second stint in South America! Between this year and last, we've spent 2 months and seen 6 countries in total, so we're chipping away, but still a long way to go yet. When we first came here, I did the Spanish Duolingo to learn a few words, and it was certainly a help, as most people would only have basic English at best. Aisling though, has been doing proper language courses and she has been carrying the team for the past two summers. Actually being able to say full sentences makes a big difference!

No immediate plans yet for our next trip, so that'll be a surprise for all of us. In the meantime, I'll try to go back and start a few blog posts from Europe that I never got round to writing. Don't quote me on that though, as it may never happen...
Posted by Mark O'Leary at 3:21 AM