If you're looking for the world's tallest waterfall... then you've come to the wrong place - it's in Venezuela. If however, you've come for the world's widest waterfall, no, not that either. Largest flow rate? Well, number 6 in the world is respectable... Ok, so it might not be top of any formal leaderboards, but it's impossible not to be blown away by the sheer majesty of Iguazu Falls. Straddling the border between Argentina and Brazil, it's not one of those places where you simply go, snap a few pics and then leave. You could spend a couple of days here, staring in awe and still not get enough. 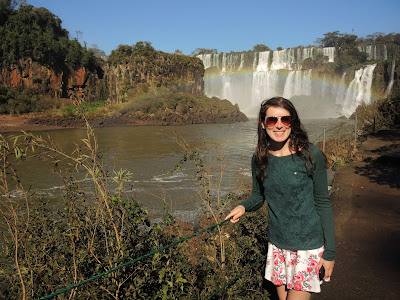 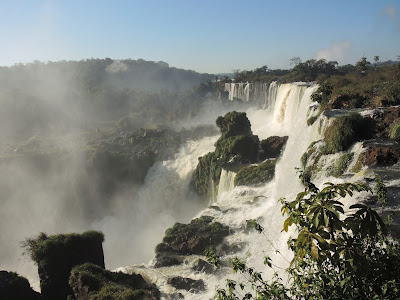 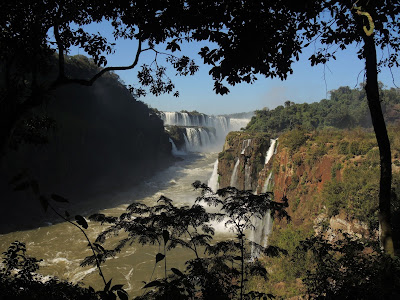 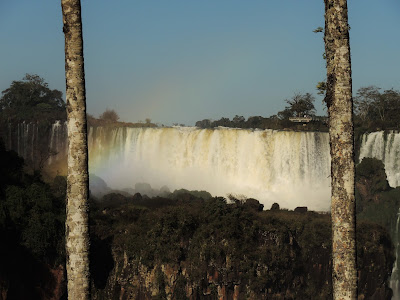 As the falls sit between two countries, you have two options for a base of operations - the town of Puerto Iguazu on the Argentinian side, or Foz do Iguaçu in Brazil. Both countries overlook the falls, and each offers a different perspective, or, if you have a few days, why choose?! It's pretty easy to hop across the border and back again (well, with an Irish passport anyway), so we planted ourselves in Puerto Iguazu, and on the first day, took a little trip over to Brazil for a few hours. 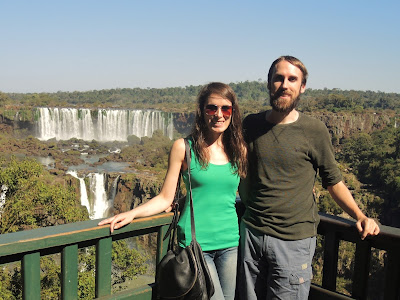 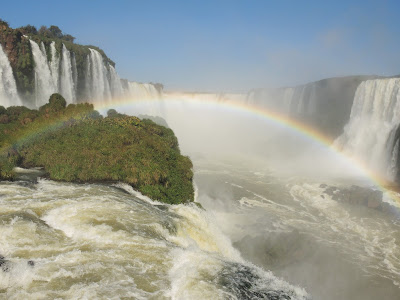 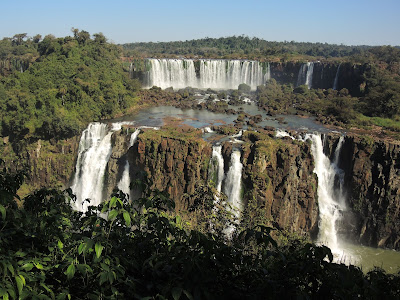 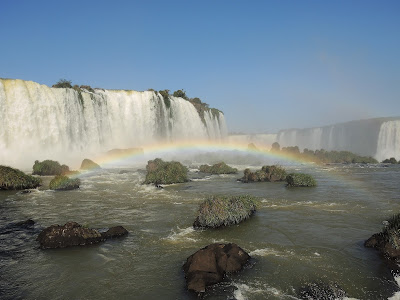 I guess it's technically a new country for us, but we're not going to count it as we were only really there for half a day. Plus, it'll give us an incentive to come back and see the other 99.99% of the place!

When you arrive at the gates, you hop on a bus to the beginning of the walking trail, which takes you all along the top of the falls, finishing up at the main viewpoint - Garganta del Diablo. And wowzers! What a sight it was. We saw enough rainbows here to last us a lifetime. It really put Ireland to shame!

This is the kinda thing they'd have on loop at a health spa, or a mindfulness seminar!

And what's better than rainbows and waterfalls? Rainbows, waterfalls and butterflies! 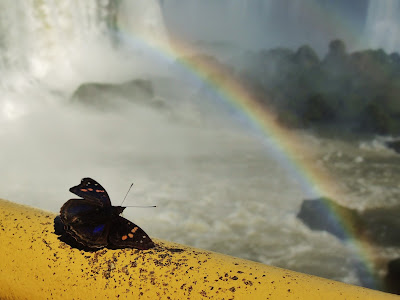 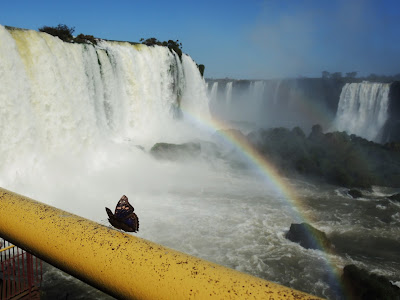 The scenery here was incredible, and I'd definitely recommend it, but the big downside was the queues. If there was nobody here, you could be in and out in an hour. As it stood, we were probably here for three times that. It was like being back in Beijing again, partly because half of the tourists were Chinese! Here's the view you don't see in the other photos: 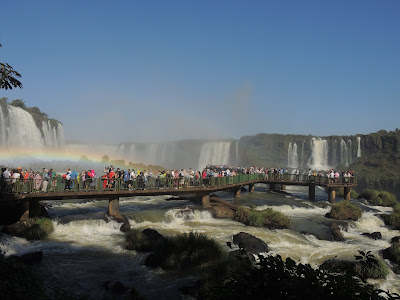 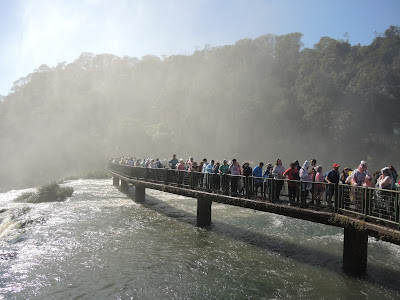 It didn't take from the experience though, and it's all part and parcel of big tourist attractions. But, whenever there are big crowds of people, it's always going to attract those looking to take advantage. And we're not talking about touts or pickpockets, well, not the human variety anyway. In South East Asia, there were always monkeys hovering, waiting to swoop in and grab the food out of your bag, or even right out of your hands! Here, it was a small, raccoon like animal known as a coati, but the effect was just the same. We didn't bring food with us, so we were fine, we could sit back and enjoy the mayhem. At one point, one even dived head first into a little girls backpack, and it's one of those car crash moments, where you think your instinct would be to jump in and help, but when it happens you just stand there watching. 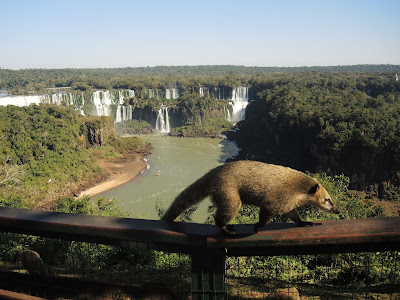 She was fine in the end. Probably...

We also watched The Guard that night on TV. All dubbed, but still hilarious. Even extra hilarious to hear a jumble of Spanish, and then every so often an Irish name or place. I never would've thought a movie like this would be shown on national television all the way on the other side of the world. 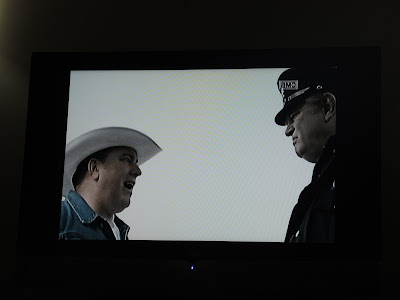 On the second day, we stayed on the Argentinian side, and learning from our mistake, got up extra early to beat the hoards. And it was a great success! There were still crowds of people at that time, but we raced past them, and in the end, had most of the viewpoints all to ourselves. So much so, that we could even make a video diary in peace!

In terms of things to see, the Argentinian side was superior to Brazil, and so if you just have one day and you can only see one or the other, this is the side I'd recommend. There were a number of walking trails with different views, you can get a ferry across to the central island (for free), and there's a train that brings you up to Garganta del Diablo. We had already seen it the day before from the Brazilian side, and the queues were insane at that stage of the day, so we gave it a miss this time, but the Argentinian side certainly gives you more bang for your buck. 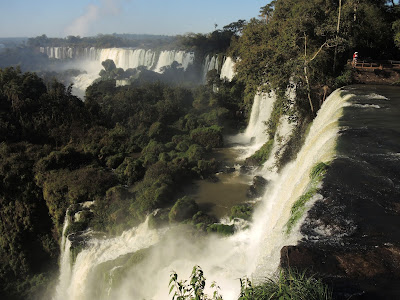 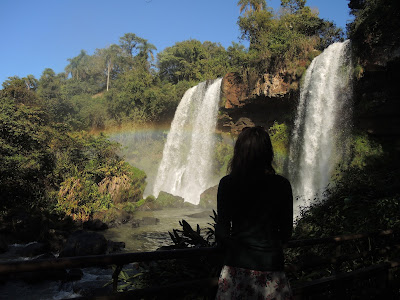 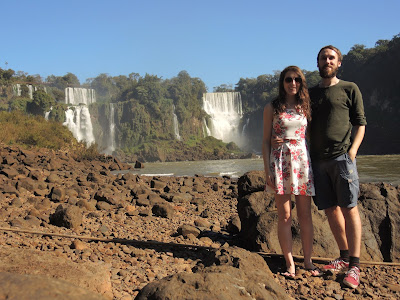 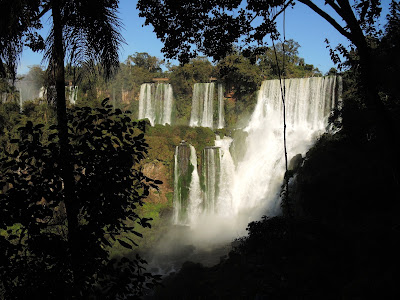 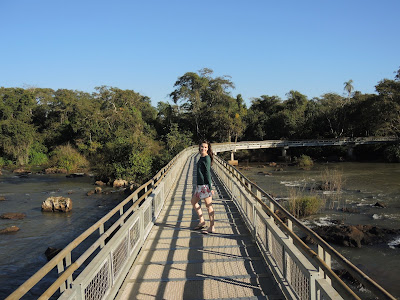 As a town, Puerto Iguazu itself was small but very nice. Our accommodation couldn't have been better positioned either, located at the crossroads (or crossrivers) of Argentina, Brazil and Paraguay, so you could just laze by the pool, looking out over three countries in one go. 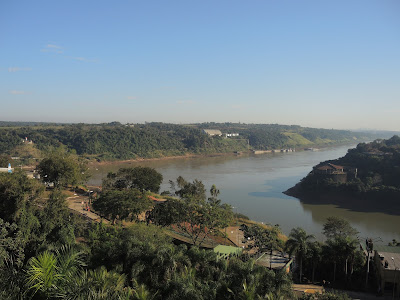 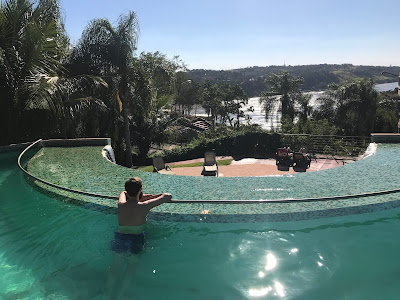 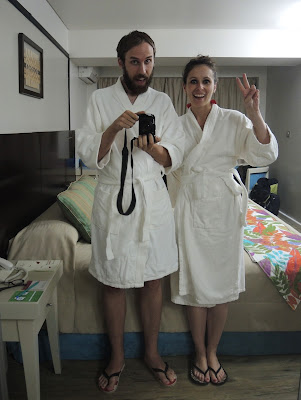 And that was our time in Iguazu. Our next stop was Asuncion, but the easiest way to get there was to travel across the border into Brazil, across the next border into Paraguay, and then fly from the infamously dodgy city of Ciudad del Este. A lot of scope for something to go terribly wrong... but it didn't! So, off we flew to Paraguay's capital, which is where I'll pick things up next time.
Posted by Mark O'Leary at 6:58 PM