Welcome to Lake Titicaca - the world's highest navigable lake, and also the number one place name for a childish giggle. This was our last stop in Bolivia before we looped back into Peru, and the lake itself is actually split between both countries. There are a few towns on both sides of the border, but we thought it would be best to just have a solid stint in one, rather than hopping from place to place. So, we settled down for a lovely three days on the lakeside of Copacabana (not that one). 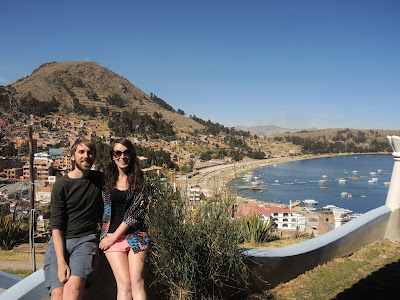 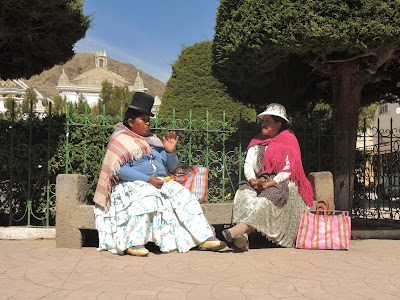 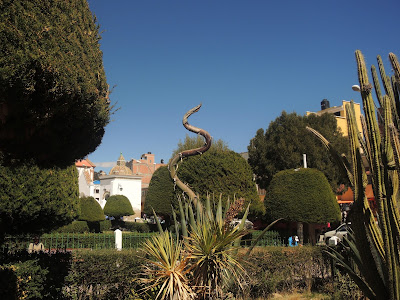 We travelled from La Paz with a company called Bolivia Hop, who I should probably talk about, seeing as we did much of the first leg of our journey with their sister company, Peru Hop. It's definitely the easiest way to travel along the main routes in these two countries, and although it's a bit more expensive than local transport, it's worth it for the ease of travel. They also give good discounts on certain accommodation and expeditions, which has saved us quite a bit. It's owned by two Irish guys as well, so another reason to give them your custom! 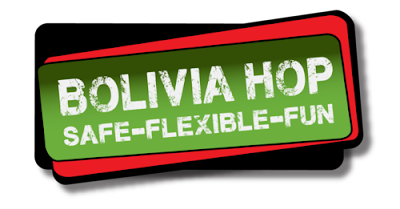 Just like in Sucre, we decided to splash out (by Bolivian standards) on super accommodation, and this one is well up there with the nicest places we've stayed anywhere in the world. There are two hotels, run by the same owner, on the hillside overlooking the lake - Hotel La Cupula and Hostal Las Olas - and they are absolute works of art. Each chalet is so beautifully designed, I would've happily lived there. In fact, I'd gladly live in that room now if they could somehow fly it to Dublin! There was a hot tub (which we used everyday, just because), a fireplace, an incredible view over the lake, and lovely gardens with hammocks and llamas! What more could you ask for?! 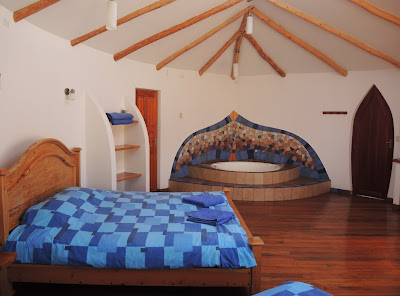 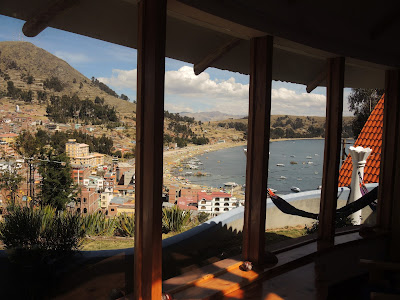 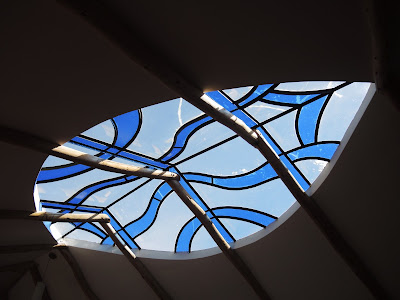 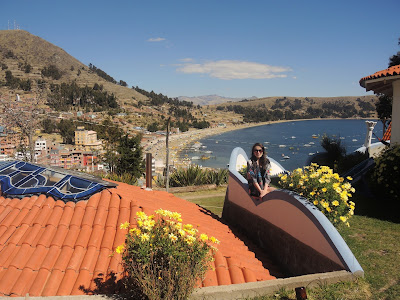 
It's funny how having such nice accommodation can shape your view of a town. Looking back on our time in Copacabana, we have nothing but fond memories, but if we had stayed in just a random hostel, I don't think Copacabana would have made any sort of impression on us. The town has a couple of nice spots, but doesn't really stand out besides in any major way. There's a short hike to a lookout point, a church and town square, all quite nice, but that's about it. 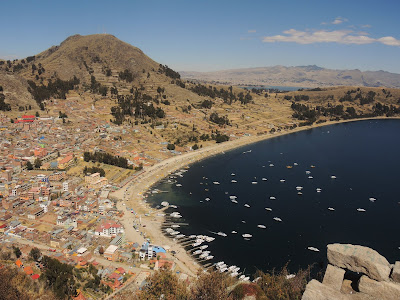 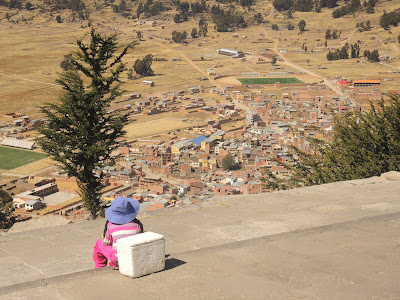 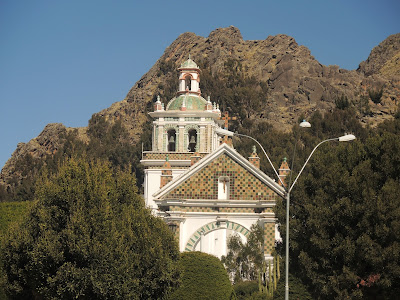 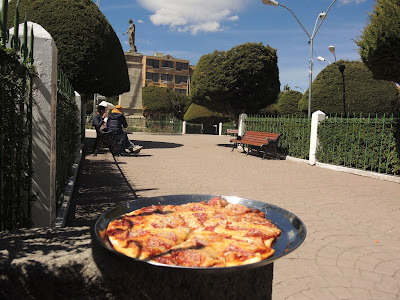 The biggest attraction here is the lake itself, and its central island, Isla del Sol, so named as it was believed to be the birthplace of the Inca sun god. Speaking of the Incas though, when do you think their empire was around? Well, apparently it was from between 1438 - 1533. It makes sense when you consider they were conquered by the Spanish during the age of exploration, but I just always imagined them being around hundreds of years before then.

Anyway, we spent a day on Isla del Sol, getting a morning boat to the northern town of Challapampa, before hiking the length of the island, and departing from the south that evening. Some people recommend spending the night here, but we found that we saw all that we needed to see in one day, and besides, we couldn't wait to get back to our sweet room! It was still a day well spent though. 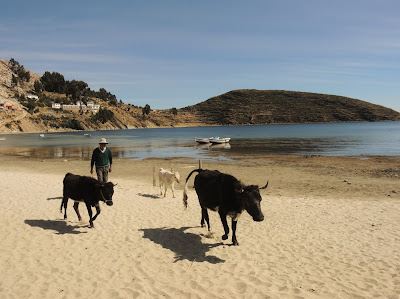 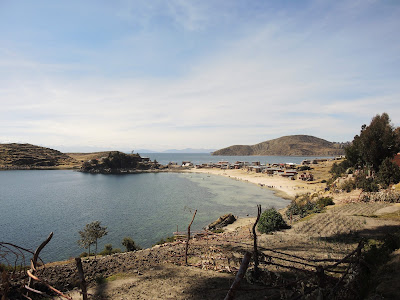 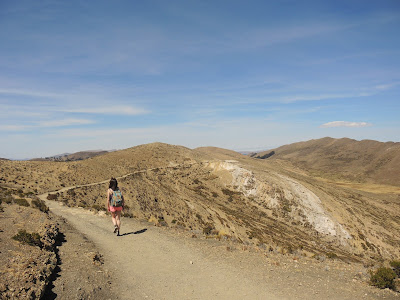 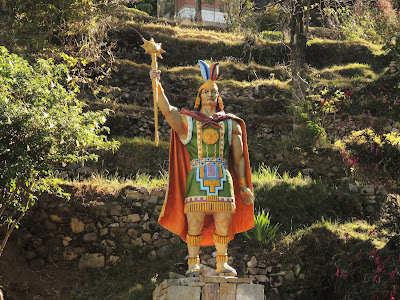 Back in Copacabana, we twice went for breakfast in a lovely spot called El Condor and the Eagle Cafe. It's worth mentioning as it's owned by a guy from Cork, and he even imports in Barry's tea especially! The food was incredible as well; good, hearty Irish food. A great little treat where you'd least expect it.


And just to prove that the Irish can't go anywhere without bumping into someone from home - on our second visit there, we got chatting to a couple who were also from Cork. After a few minutes of conversation, we realised the guy was friends with my brother and our mothers grew up together! The owner just smiled to himself as he listened. I'm sure this kinda thing happens all the time in there. 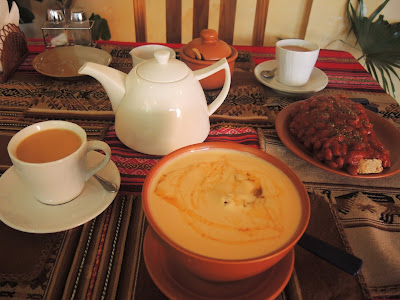 And that was all for Copacabana, a decent town, hoisted up by incredible accommodation. We made our video diary in our front garden, and it gives you a good visual of how nice the place was inside and out.

That was also the end for Bolivia, as we jumped on a night bus to Peru. As a whole, Bolivia was very nice, with Salar de Uyuni and Death Road the highlights. The thing is though, as has happened before, it was hyped up a little too much for us beforehand. We had heard from a few people previously that Bolivia was their absolute favourite, and so we were expecting more than we ended up getting. We've had the same story with Laos and Sri Lanka in the past. Bolivia was still great and we enjoyed our time here, just don't travel anywhere with prior expectations!

For now, it was off to Cusco to put Peru properly on the map as we began our trek up to Machu Picchu! See you then!
Posted by Mark O'Leary at 8:50 AM