Last time out, we had a contender for worst ever destination with Arica. This time, we're right up at the other end of the table, alongside heavyweights like Bagan, Hoi An and Tokyo, with San Pedro de Atacama putting itself and Chile firmly on the map. Our decision to take a day off Arica and put it towards San Pedro is now looking even more inspired! We had four full days here and each one was better than the last, with so much to see and do in the surrounding area. The scenery is up there with the very best we've encountered anywhere in the world, and more diverse than you could imagine, amidst the sand, snow, salt and sea. 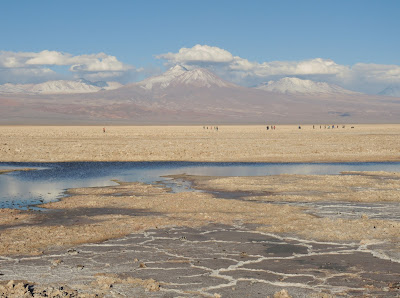 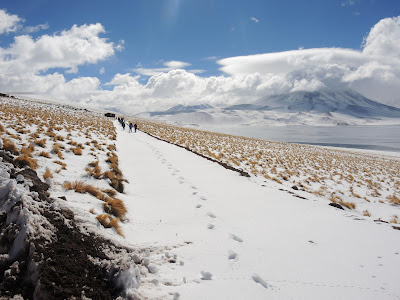 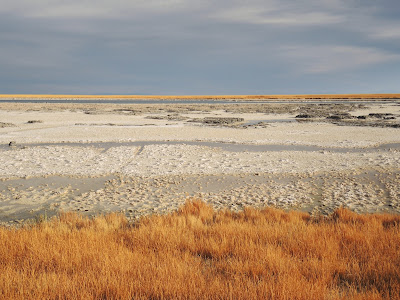 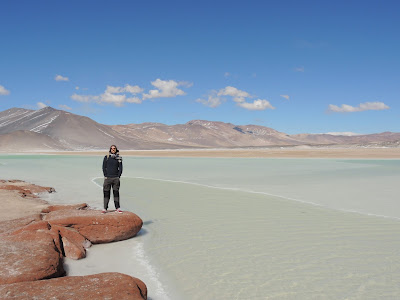 That last one is actually a lake, but that didn't really fit with the alliteration...

Even though we had a wonderful time here, things got off to quite an ominous start. This is San Pedro de Atacama, as in, the Atacama Desert, as in, the driest desert in the world. So, of course, what happens when we roll into town...? 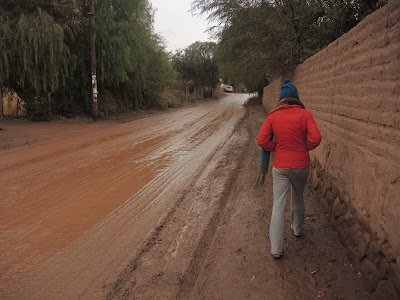 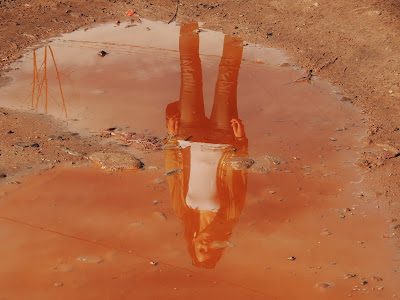 The average rainfall here for July is 0 mm, and in fact, we were told that the amount  of rain they got that day is more than they usually get in a year! You're welcome, lads. I was expecting to be shaking the sand out of my shoes, not scraping the mud off! 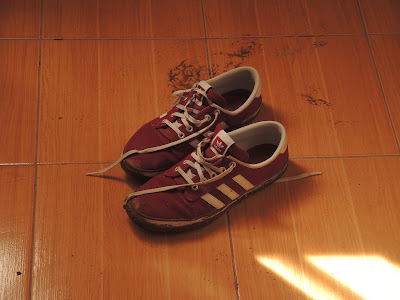 The wet weather didn't last too long though, and it gave us time to arrange our diaries for the next few days. San Pedro itself is a nice little town, like something you'd imagine from the Wild West, but the real beauty lies in its environs. We had booked ourselves in for four excursions to make the most of our time in town, but that first day's rain meant that one had to be cancelled. In fairness though, it could've been a lot worse, and we still got to see pretty much everything we wanted. The one that was cancelled, Tatio Geysers and Puritama Hot Springs, was quite similar to what we had seen in Iceland this time last year anyway, so no big loss.

Our first excursion took us to Laguna Cejar, a salt lake akin to the Dead Sea, where you can float with ease. The hardest part was lowering yourself into the freezing cold water. Don't be fooled by the blue skies, it was seriously cold! 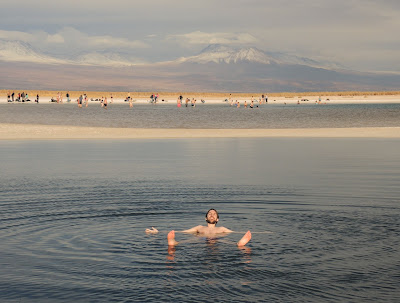 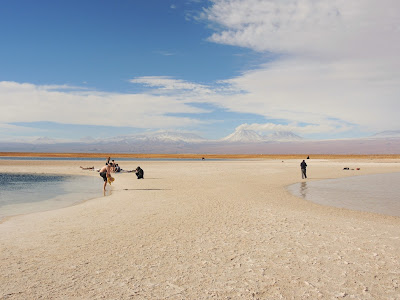 The temperature was only half the problem as, when the water dries, you're left with a thick layer of salt on your skin. Thankfully, we brought along a bottle of fresh water to douse ourselves with. Otherwise, it would've been a long and itchy day. 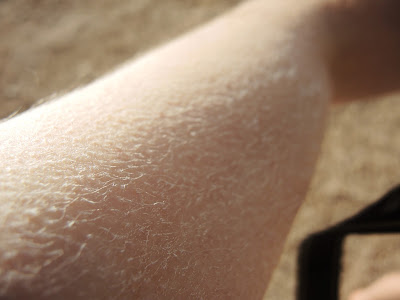 Embarrassing story actually - we didn't know that the lake had an entrance fee, so of course we didn't bring money for it. We only realised when we reached the top of the queue and had to sheepishly ask our driver for a loan. Totes awks! We made sure, of course, to pay him back as soon we returned to San Pedro, with a nice tip included. Thanks Jorge!

After our swim (or rather, float), we headed to the Ojos del Salar, two round, still lakes that give crystal clear reflections. 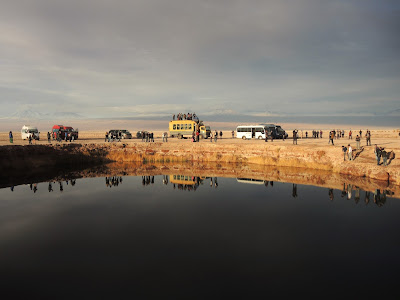 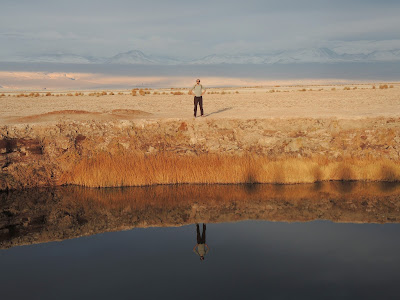 Our final stop of the day was sunset at Laguna Tebinquinche, and as sunsets go, it's up there with the very best. It was one of those places where you end up just taking photo after photo of the same thing. It doesn't even seem real, but it is! #nofilter 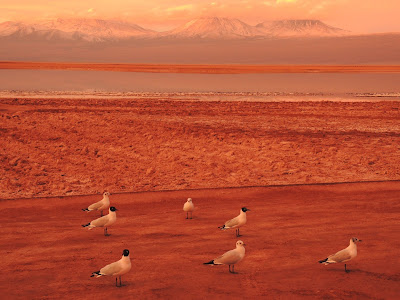 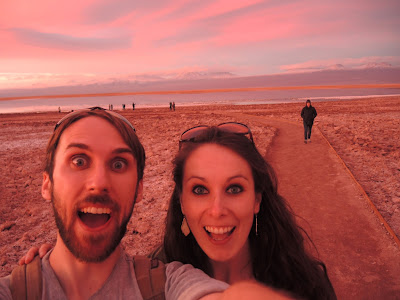 And that was only day 2! We still had two more days of sights to see, so I'll try to go through them quite quickly. Good times don't make for the best stories...

The next day, we had an afternoon tour of Valle de la Luna and Valle de la Muerte - Moon Valley and Death Valley. Again, more stunning scenery, so I'll just let the pictures do the talking. 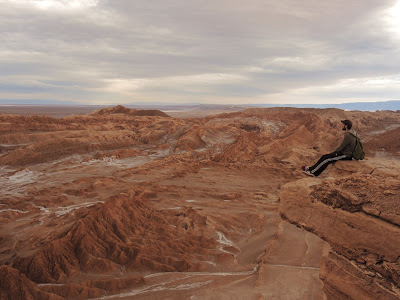 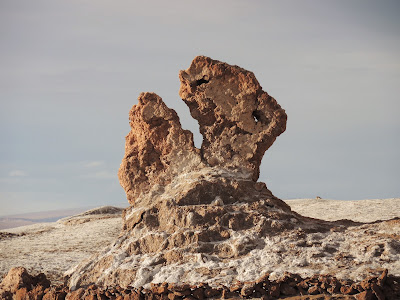 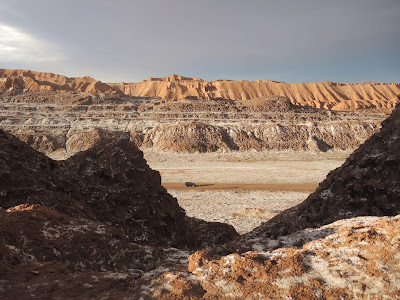 It's said that Death Valley (Valle de la Muerte) was originally Mars Valley (Valle de la Marte), but was just mistranslated. That theory makes a lot of sense when you see the photos. They're like stills from The Martian! In fact, just for fun, I put in an actual picture from the movie in amongst my own. See if you can guess which one! 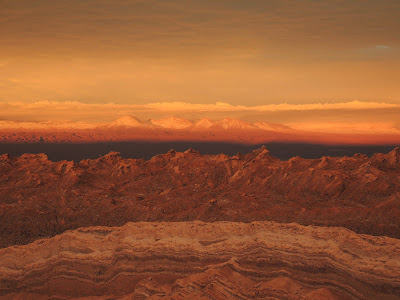 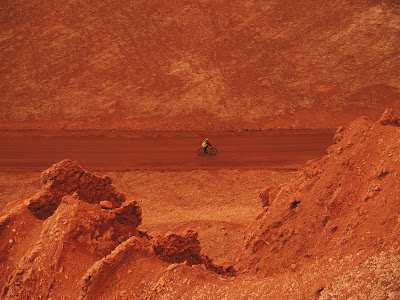 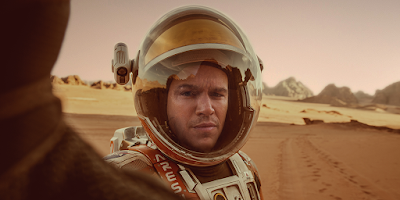 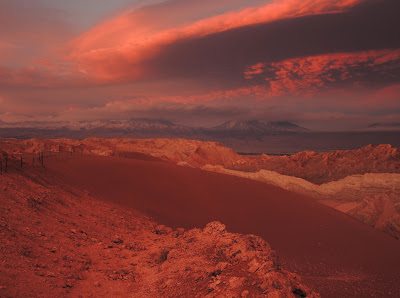 Another day, another unbelievable sunset. And I mean unbelievable in every sense of the word. Look at this next photo and tell me it doesn't look like the worst Photoshop you've ever seen! 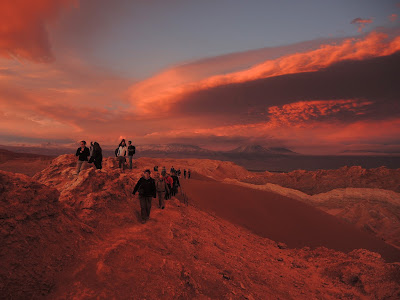 One other thing to note from that day - when we tell people we're Irish, there's usually mixed familiarity. Some have never heard of the place (like the stewardess in Miami airport, seriously), some have a vague idea, and some even suggest their favourite Irish people - in Kunming, we met a guy who loved U2 and The Script. In Bali, our taxi driver spoke about Roy and Robbie Keane. Today however, our Chilean guide happened to be in love with Lisa Hannigan. Not a name I would have expected, but a welcome one nonetheless. 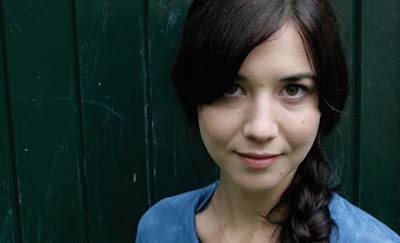 Our last day, and there was more adventuring, this time up into the Andean Highlands. If we thought the other days were cold, we were in for a serious shock. Remember, this is all part of the Atacama Desert! 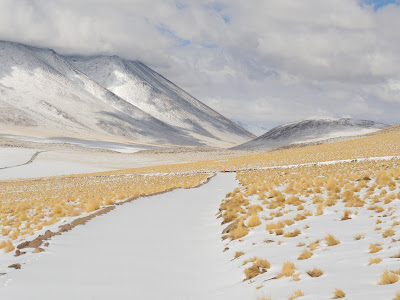 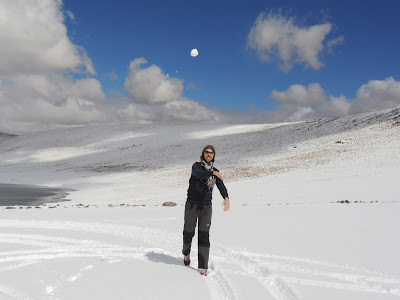 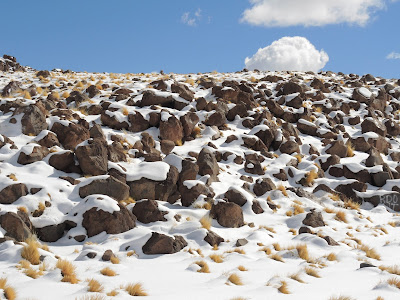 We spent the day travelling through the snow-capped Andes, andecapped by the snow. We really didn't pack for weather like this! We still had a great day, visiting the Piedras Rojas, Lagunas Antiplanicas and the Laguna de los Flamencos. We took plenty of photos of the flamingos from a distance, but there'll be much better ones in the next blog entry, so hold tight for that instead! 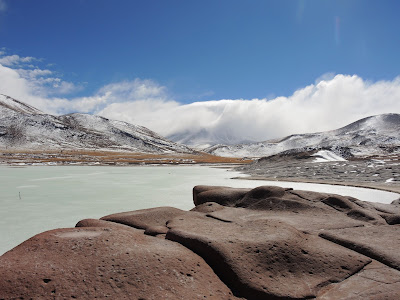 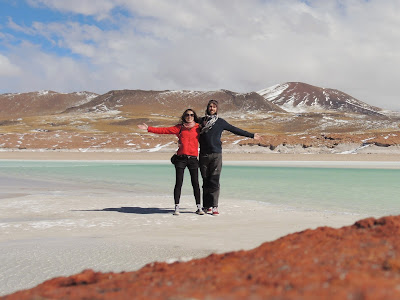 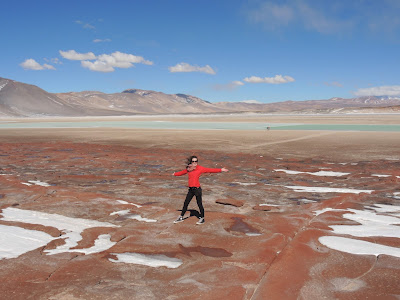 Just to note, if you do come to San Pedro, the streets are lined with tour companies, so it can be hard to know which ones are best. The two we worked with were great, so I'd recommend Atacama Connection and Cosmo Andino.

And that was pretty much it for our incredible few days in San Pedro. Here's our video diary in case you want to hear the same stories again:

Even though we only had a week in Chile, it made a huge impression on us, and it's definitely one place we'll be returning to in the future. I remember when we crossed the border from Peru, seeing a sign for Santiago, over 2,000km away. I'd never seen such a long distance on a road sign, and the whole country is twice that length! So, plenty more to see.

For now, we're crossing the Andes once more, this time leaving Chile behind and entering our next and last country of the trip - Bolivia!
Posted by Mark O'Leary at 6:13 AM