Our lasting impression of Nepal is a lot like that of Laos, and in the same sense, Pokhara is to the former what Luang Prabang was to the latter - high in expectation, low on delivery. Before we even stepped foot in the country, our head had been filled with glowing reports from friends and strangers, and we were expecting Nepal to be a serious contender once we made out our final rankings at the end of our time in Asia. And in Nepal's potential quest for dominance, Pokhara was set to be the jewel in its crown. In reality, both the city and country were relatively pleasant but disappointingly unspectacular, just like the aforementioned Luang Prabang and Laos before them. I guess it's best to go into any new destination without preconceived notions and just enjoy the place for what it is, rather than measuring it against what you expect it to be. As I said, Pokhara was quite nice and it's a shame that we do have this sense of negativity towards it, especially seeing as we spent a whopping ten days here in total! That's probably the most we've spent in any one place ever in our travels, and it kinda came about in unplanned circumstances. Originally, we had intended to do a bit of trekking here too, as well as Everest, spending maybe 4 or 5 days on the Annapurna trail. As it turned out, by the time we reached Pokhara, going on another trek was the last thing we wanted to do, so instead decided to take it easy for the duration of our stay in town. But remember, that was a good thing as Pokhara was set to be heaven on Earth! I'm sorry, I’m probably making it sound like we had an awful time here, and we really didn't! We were just expecting a 9.8/10 and got maybe a 7.4. Expectation is a killer…

We did, however, appreciate the rarity of having an extended period somewhere, and the luxury of waking up in the morning with no plan to follow. 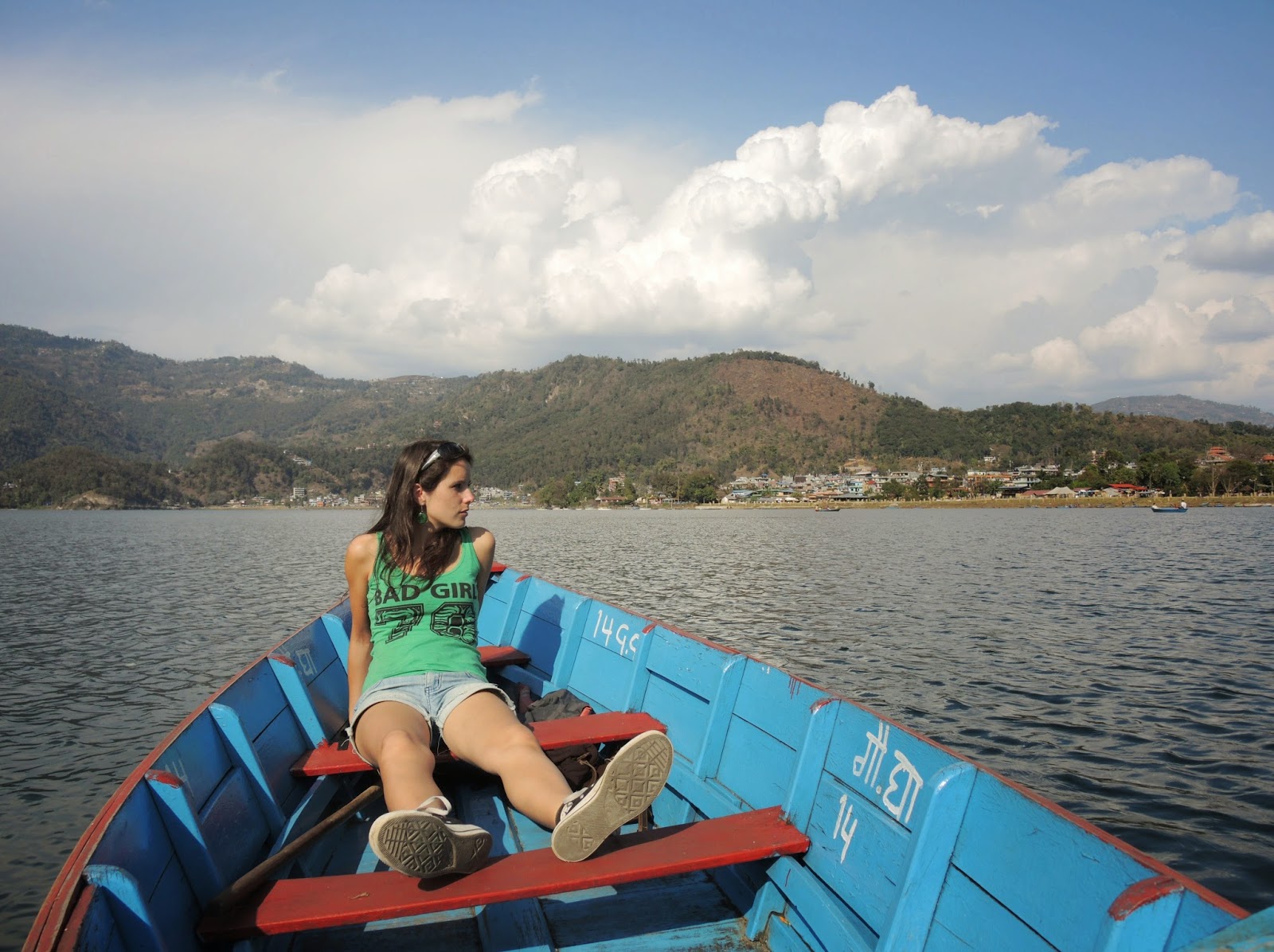 Seeing as I previously mentioned Luang Prabang, they’re actually quite similar, and I can see how a lot of travellers would fall in love with places like these, but it’s just not our type of thing. They’re both laid back, water-side towns, with lots of nice restaurants and Bohemian cafes and that’s fine for a day or two, but we’re doers. We like to go and see things, or try new activities, not just sit around and drink tea. (The Nepali tea they gave us in our hotel though was absolutely incredible! I've already looked up the recipe!)

I'm not going to give you a blow by blow account of our ten days here, simply because, some days we didn't do much at all! So, you'll just get the highlights reel, or at least what I can remember.

Pokhara is actually surprisingly big, even though you wouldn't think it due to the main tourist area being nestled snugly in a little pocket on the banks of Phewa Lake. The lake was our main focus during our stay and even on the days where we wouldn't do much, we'd still walk along the edge, or just hire a boat and paddle about (paddle a-boat). 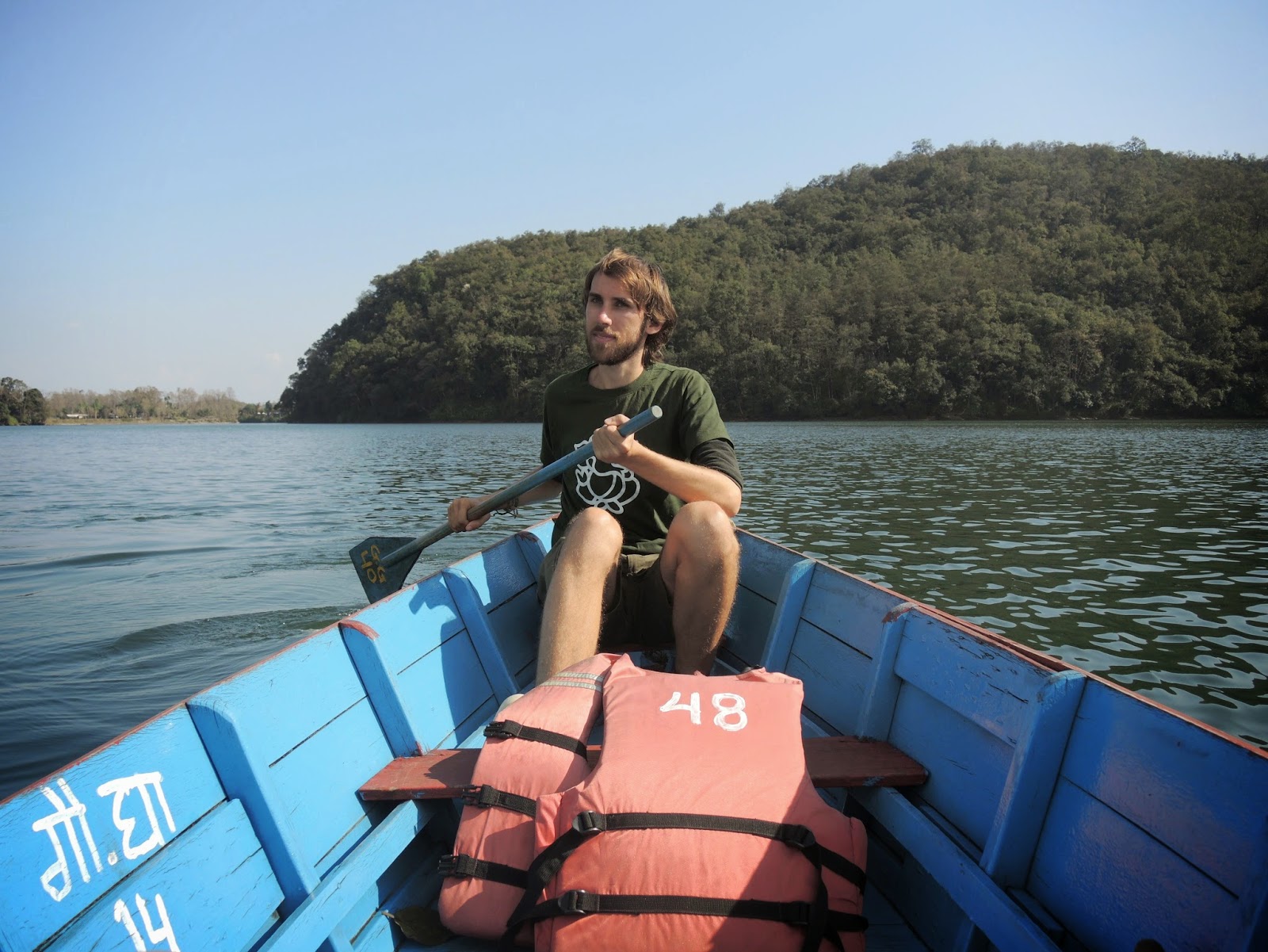 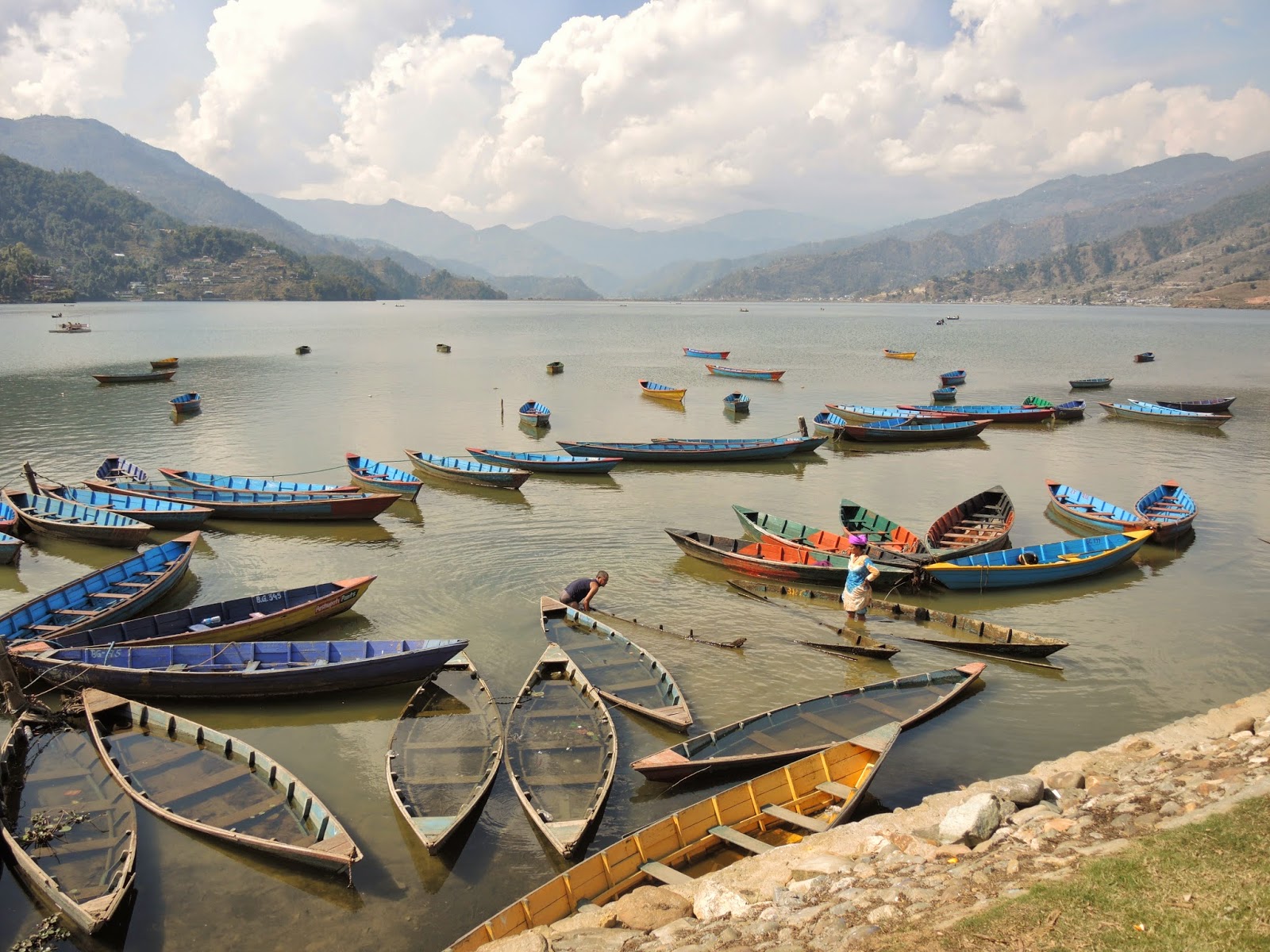 Overlooking the lake, high on a hill is the Peace Pagoda. You can get a bus there, or take a boat across the lake, and walk up, but sure, we weren't doing much else so we just walked the whole way! It doesn't look like much from down at the lakeside, but it's actually quite nice once you finally work your way up through the forest. 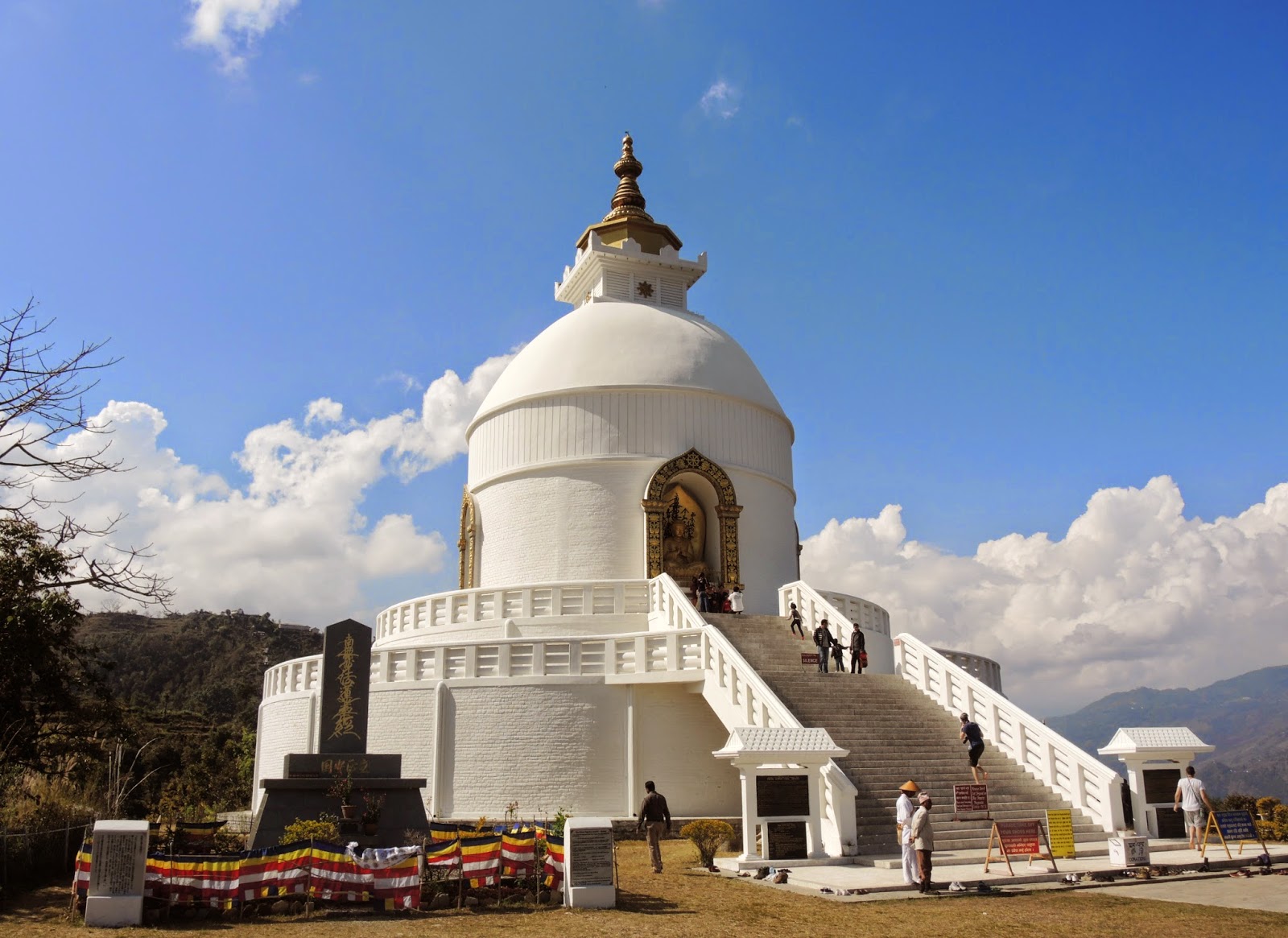 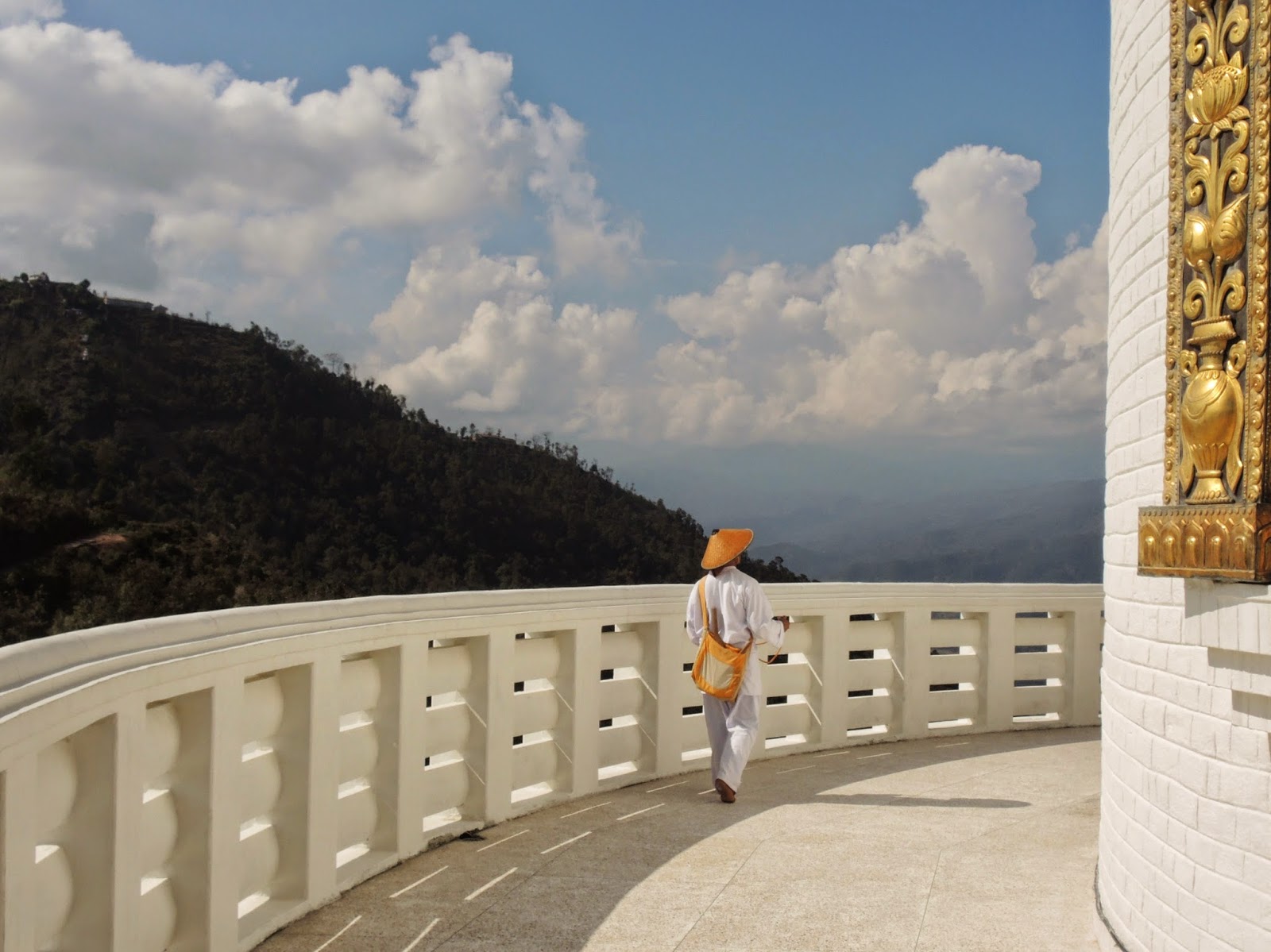 And who did we meet up there, only Raiden, the God of Thunder himself! Well, it was a nice change from the Sub-Zero temperatures we were facing the week before! 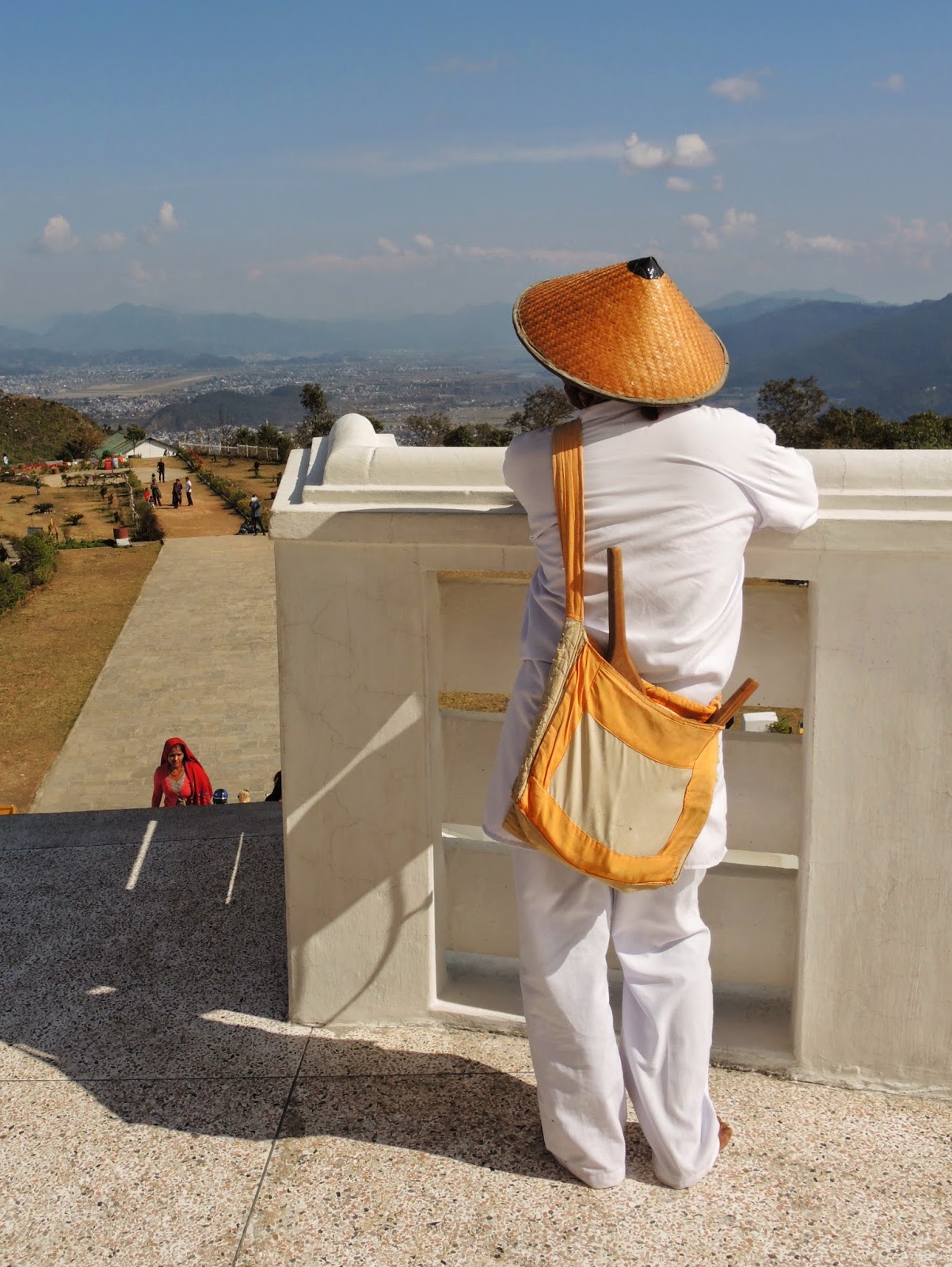 While we were here, it just so happened to be during the Paragliding World Cup. I didn't even know there was such a thing! I'm not sure how you can actually win such a competition, but I think it's fair to say, the guy we saw crashing into the lake did not.

It did serve as a lovely background to our stay in town - at any time you could look up and see an infinite number of brightly coloured chutes, swimming about in the sky. One afternoon, we even went to the landing pad and hung out on the grass, just watching them drift on in. 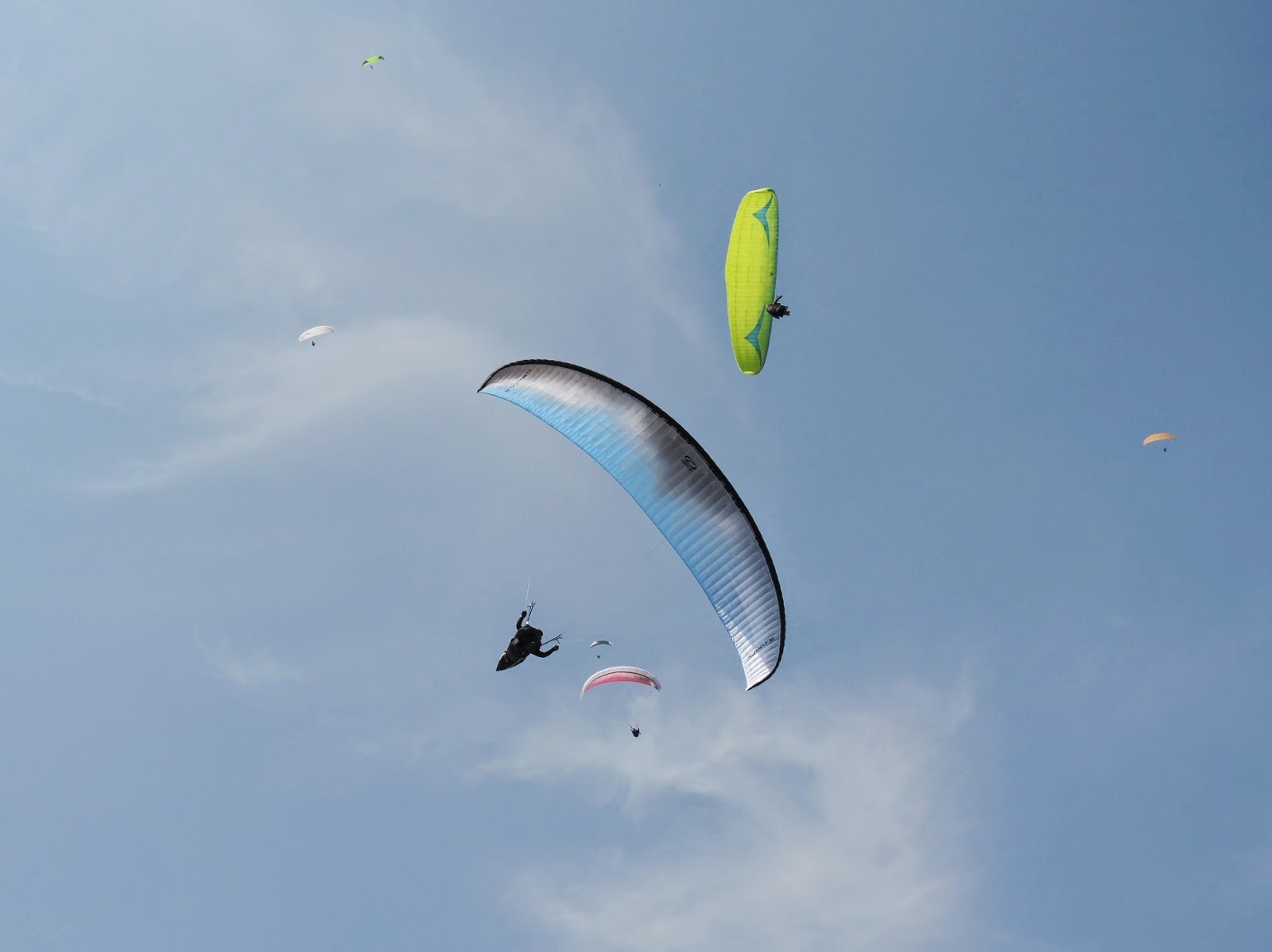 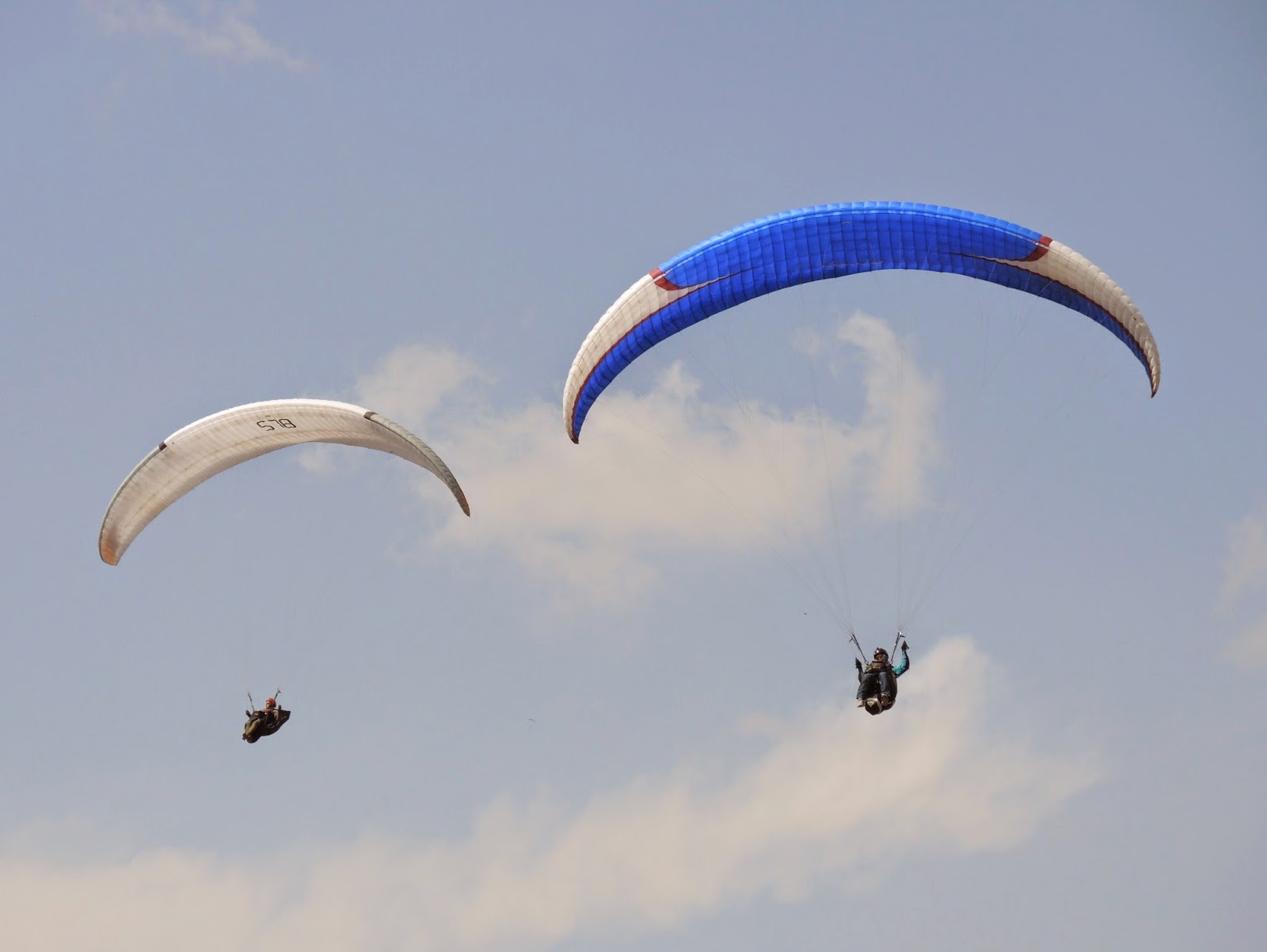 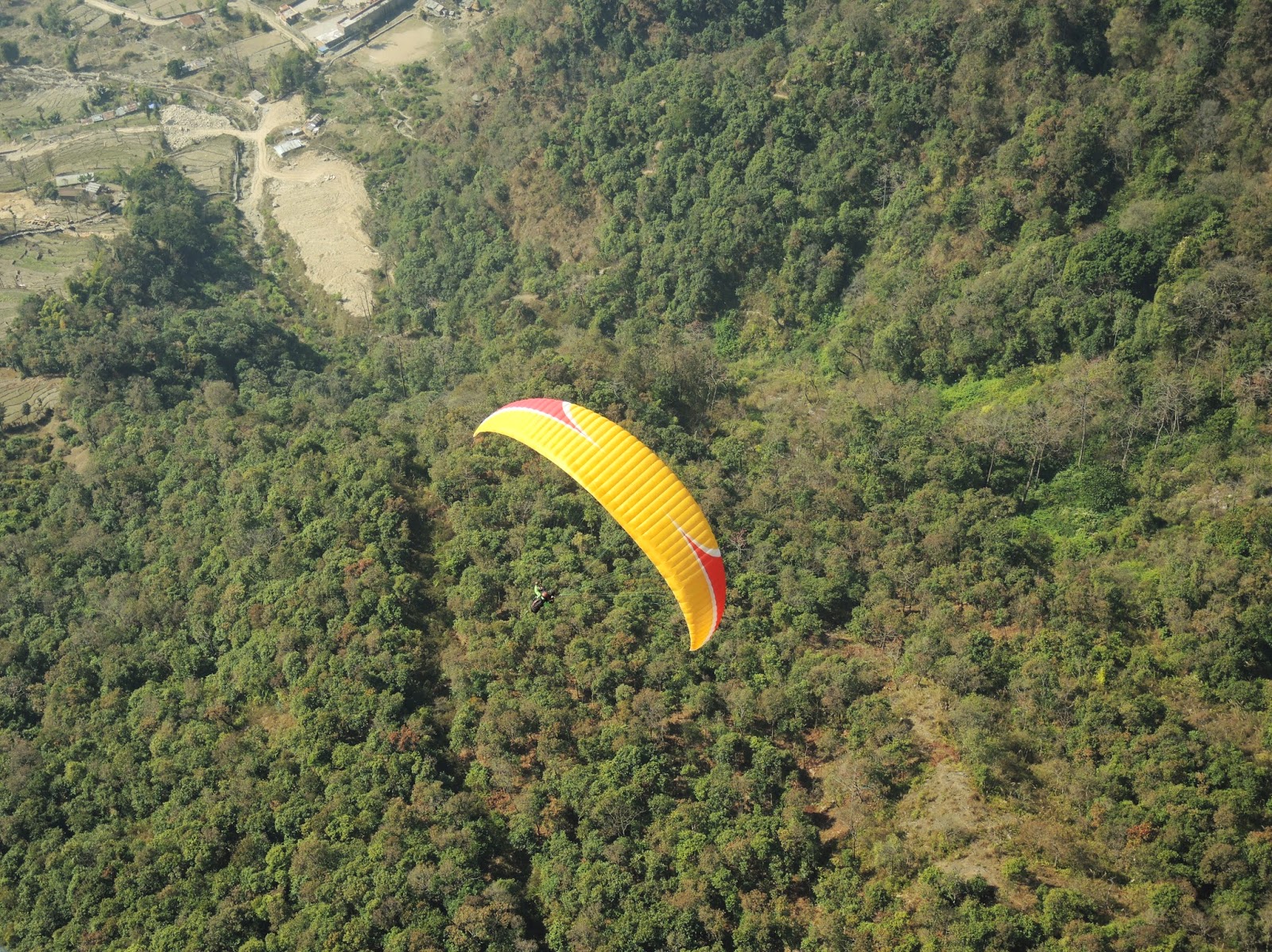 That's right, we made our paragliding debut while in town! Obviously not part of the competition, but I'm sure we'll get there at some stage. I've always wanted to do something like this - skydiving, bungee jumping, hang-gliding - so it was great to finally get the chance to take to the skies in some capacity. We're usually quite frugal with our money too, and rarely splash out on big activities like this, so it's always nice to spoil yourself now and again. 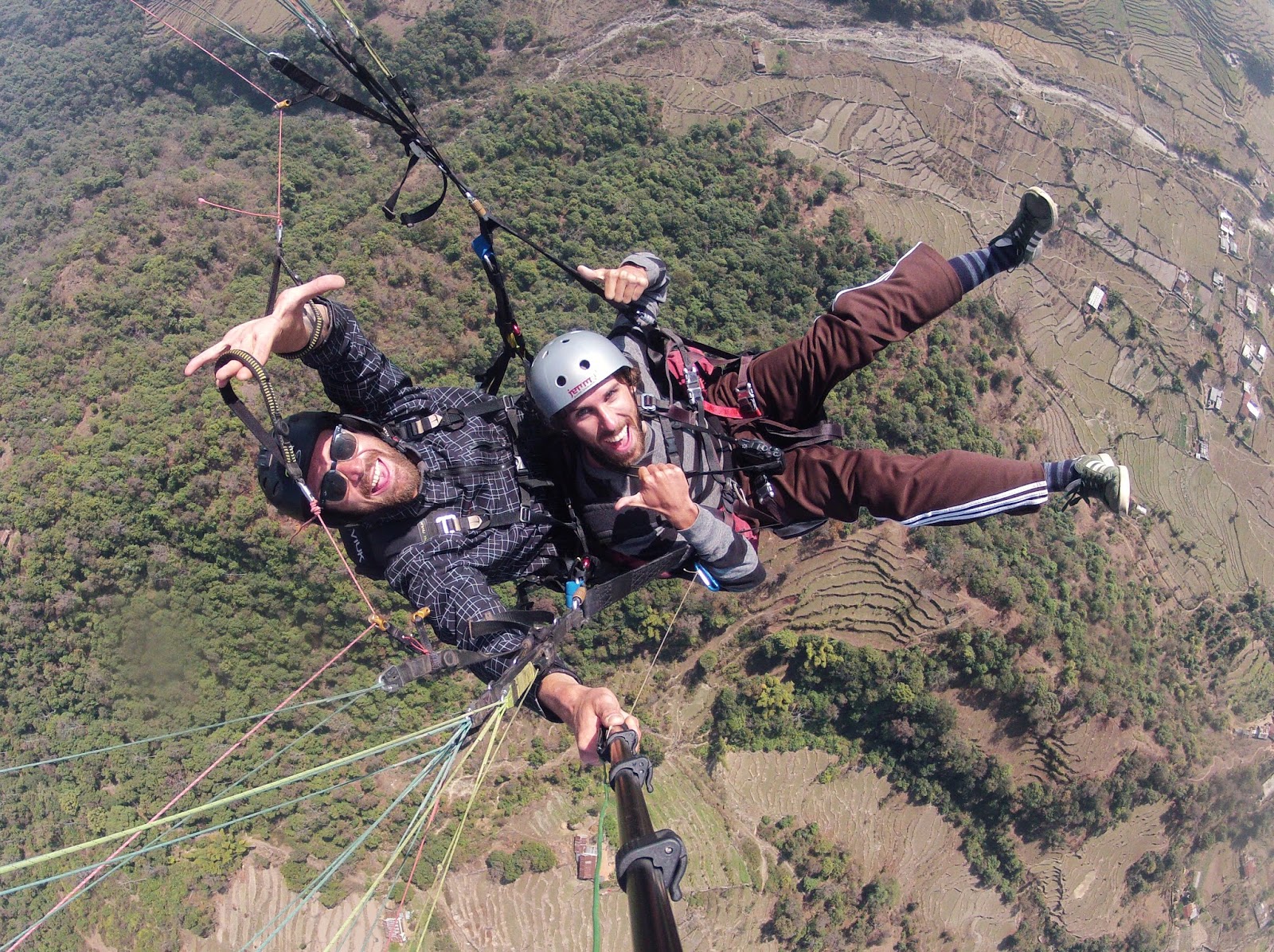 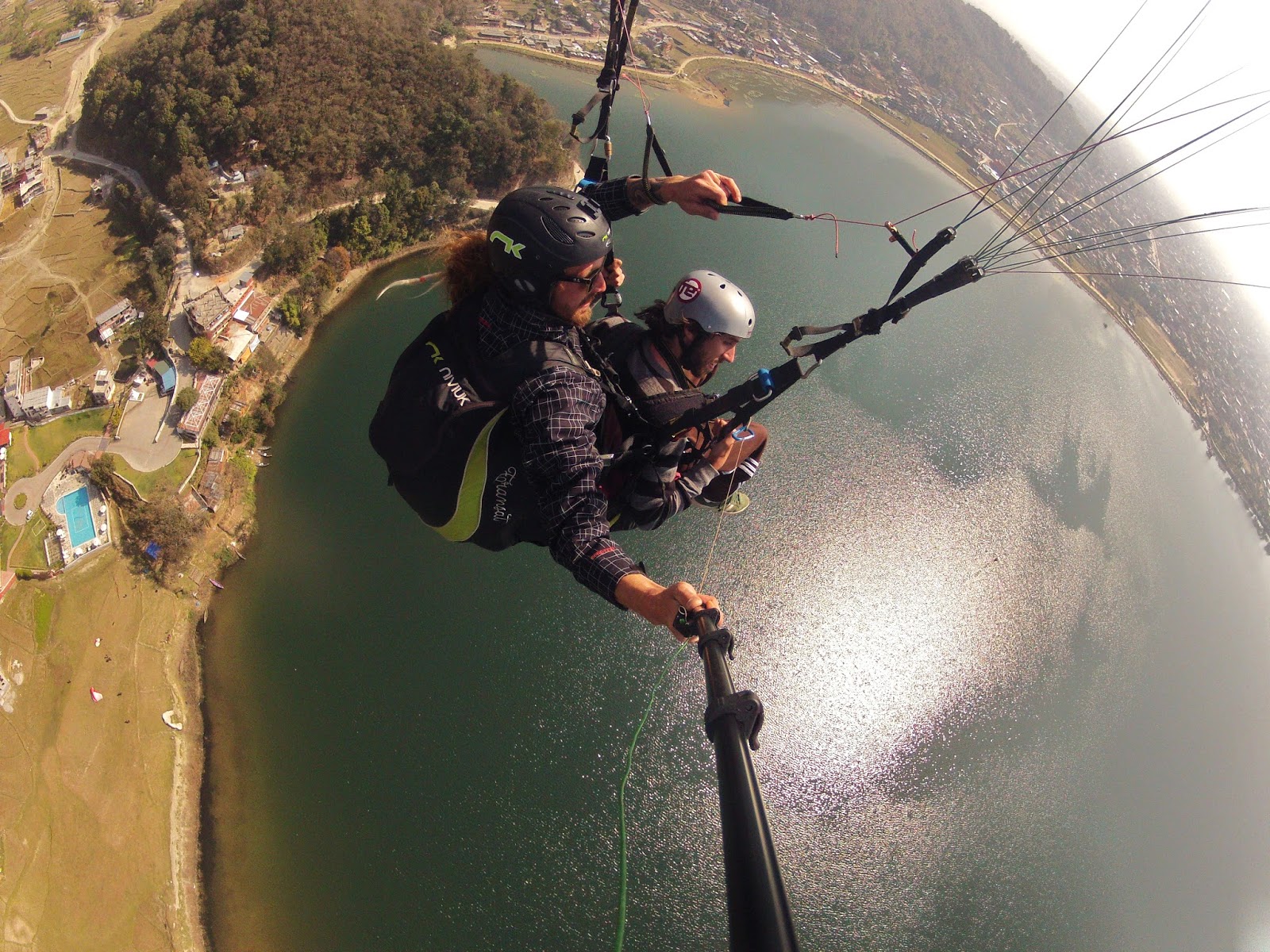 It was a great experience and probably the least extreme of the above mentioned 'bucket list contenders' as, once you take flight, you just float casually down, enjoying the surroundings, rather than hurtling towards the ground.

The only other excursion we had was going from one lake to another, as we took a little trip to Begnas Lake. It was just for the change of scenery really as there isn't really anything spectacular to note about the place. We just went for a couple of hours, had a stroll around, sat down, read our books and came back again. It was a nice enough spot though. 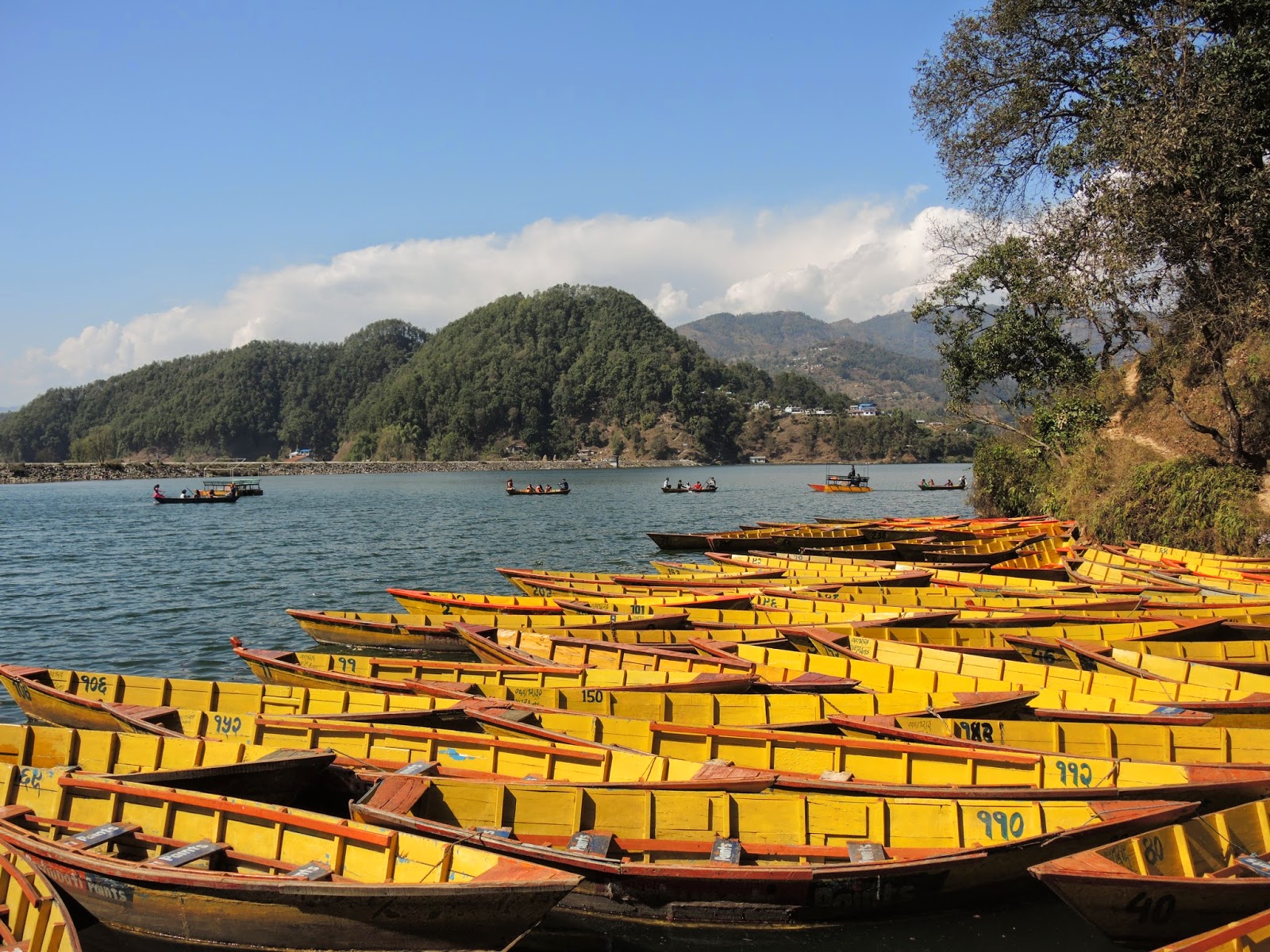 That was about it for solid activities. The rest of the time we had here was spent eating, a lot! After Everest, we were so sick of the same, measly food day after day, that we really stuffed our faces at every possible opportunity. And Pokhara was a great place to do that. Cheap food, a huge variety of restaurants and a nice atmosphere to just sit back and reflect upon how much you've just eaten, and how little you can move.

All in all, Pokhara wasn't so bad, and if we had come here for say, 3 or 4 days, without any preconceived expectations, maybe we would've really loved it. As things went, our time in Pokhara pretty much sums up our time in Nepal - nice, but that's all. 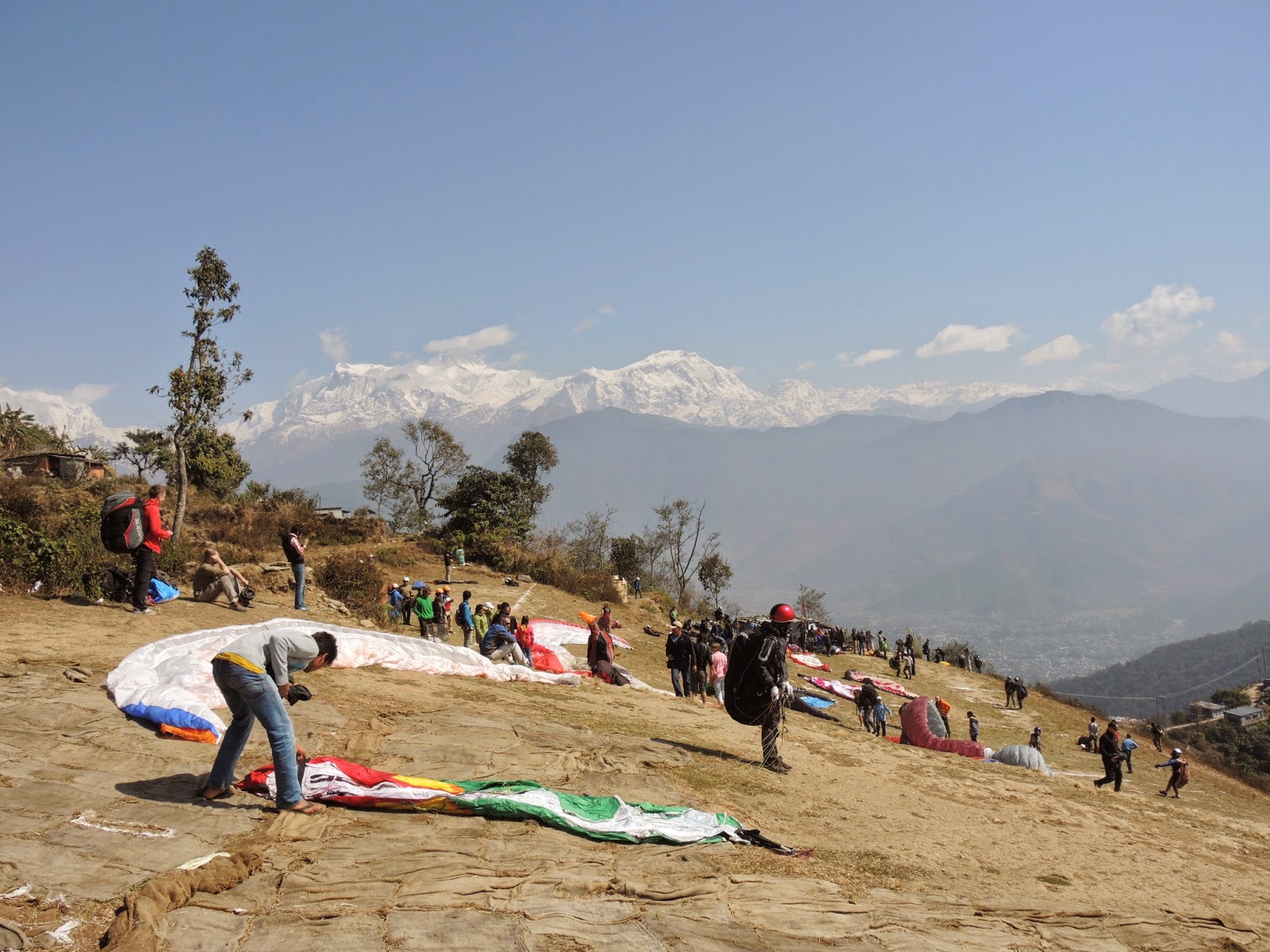 We spent 10 whole days here, the longest time we've spent in any one place ever, and would you believe, in all that time, we forgot to make a video diary! We just had to make an extra long one in Kathmandu, which will be the next entry, although it was technically the first place we visited in Nepal... Just read it, it'll all make sense!
Posted by Mark O'Leary at 6:04 AM