Originally, when we devised our master plan for this 3 month journey, we had 3 days assigned to Hampi and then 4 days for Goa, which would be our next stop (sorry to ruin the suspense), but due to train timetabling, we had to slightly rejig things. So, that meant we now had 4 days in Hampi, but that was ok as it gave us lots of time to see everything there was to see, and even more time to unwind. Due to this extended stay, we decided to treat ourselves and splash out on a fancy hotel in the nearby town of Hospet.

We had been looking forward to it for a while as we never usually spoil ourselves when it comes to accommodation as we, more often than not, just go for the cheap and cheerful. We were expecting it to be a nice place so, on the way there, we were trying not to build our hopes up too much, in case we were disappointed. We arrived at the hotel and bounded up to reception, eager to be taken to our room, when we were told there was a change of plans. For some reason, our room wasn’t available… and we had been upgraded to the executive suite! Boom! Talk about Hospet-ality! 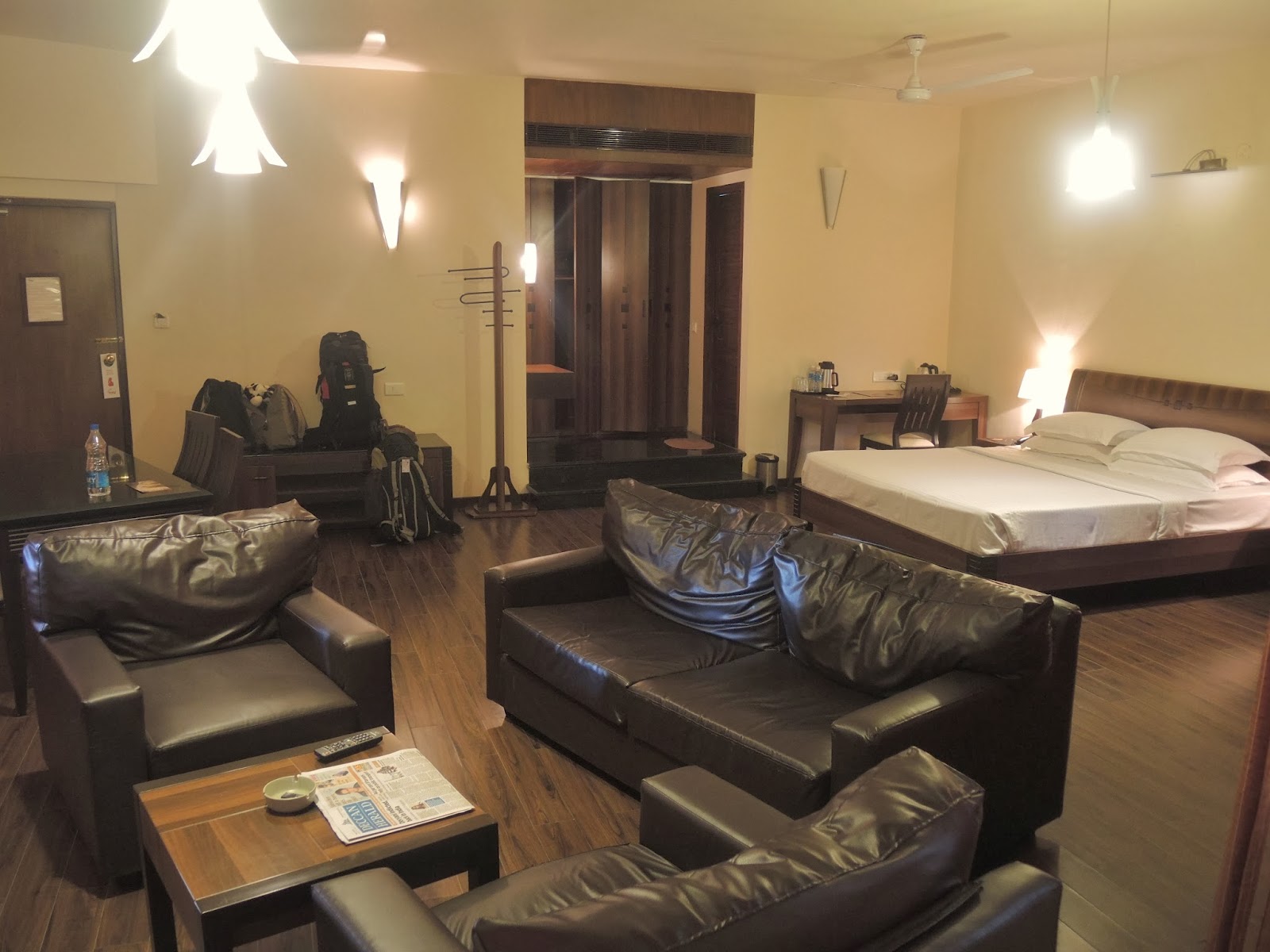 More like executive sweeeeet! I knew that lucky double bird shit in Sri Lanka would eventually come back around!

We could easily live in an apartment this size! It was probably twice as big as our place in HK! We had the works - a leather couch, a dining table, flatscreen TV and more lights than we knew how to turn on! (In fact there was one bedside lamp that we actually never figured out how to turn off… it’s probably still on now).There was also a swish pool that we frequented as much as possible – a perfect tonic for the hot, Indian sun. 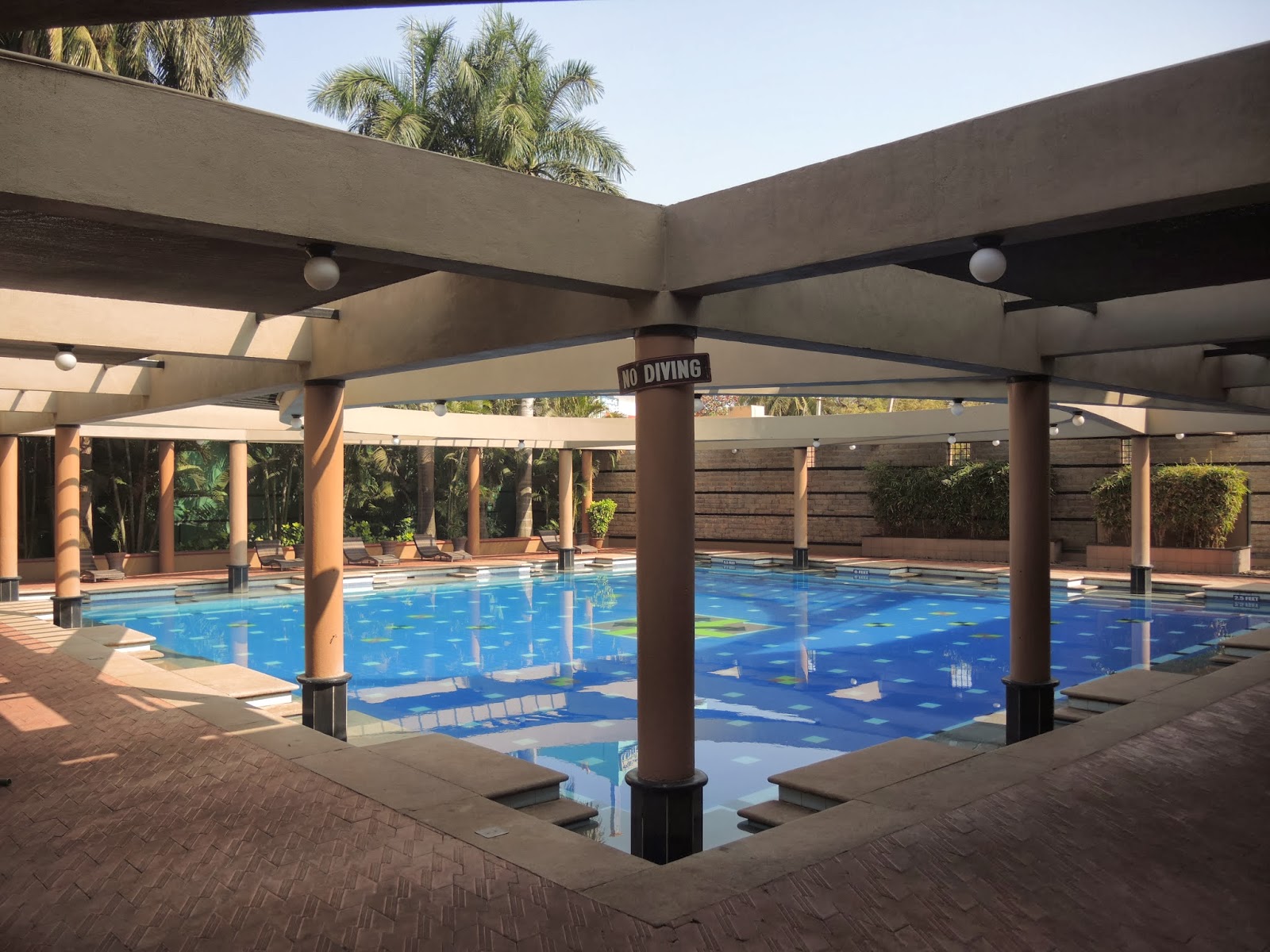 The food was equally as magnificent, so our first order of business (after running giddily around the room a few times in celebration), was to stuff our faces at the breakfast buffet, before we headed out for the day.

358 words in and I haven’t even starting talking about the place we’re actually visiting! Hampi is the former capital of the 14th century, Vijayanagar empire, the ruins of which are now a UNESCO world heritage site. We've been to some ancient capitals before and historical ruins, and sometimes there's barely even a wall left standing, so it's hard to be impressed, no matter how grand the empire once was. But Hampi really is spectacular, right up there with some of the best sights we've seen. Not only how well preserved everything is, but the vastness of the complex and the intricacy of the architecture and carvings. It's impossible not to be impressed. 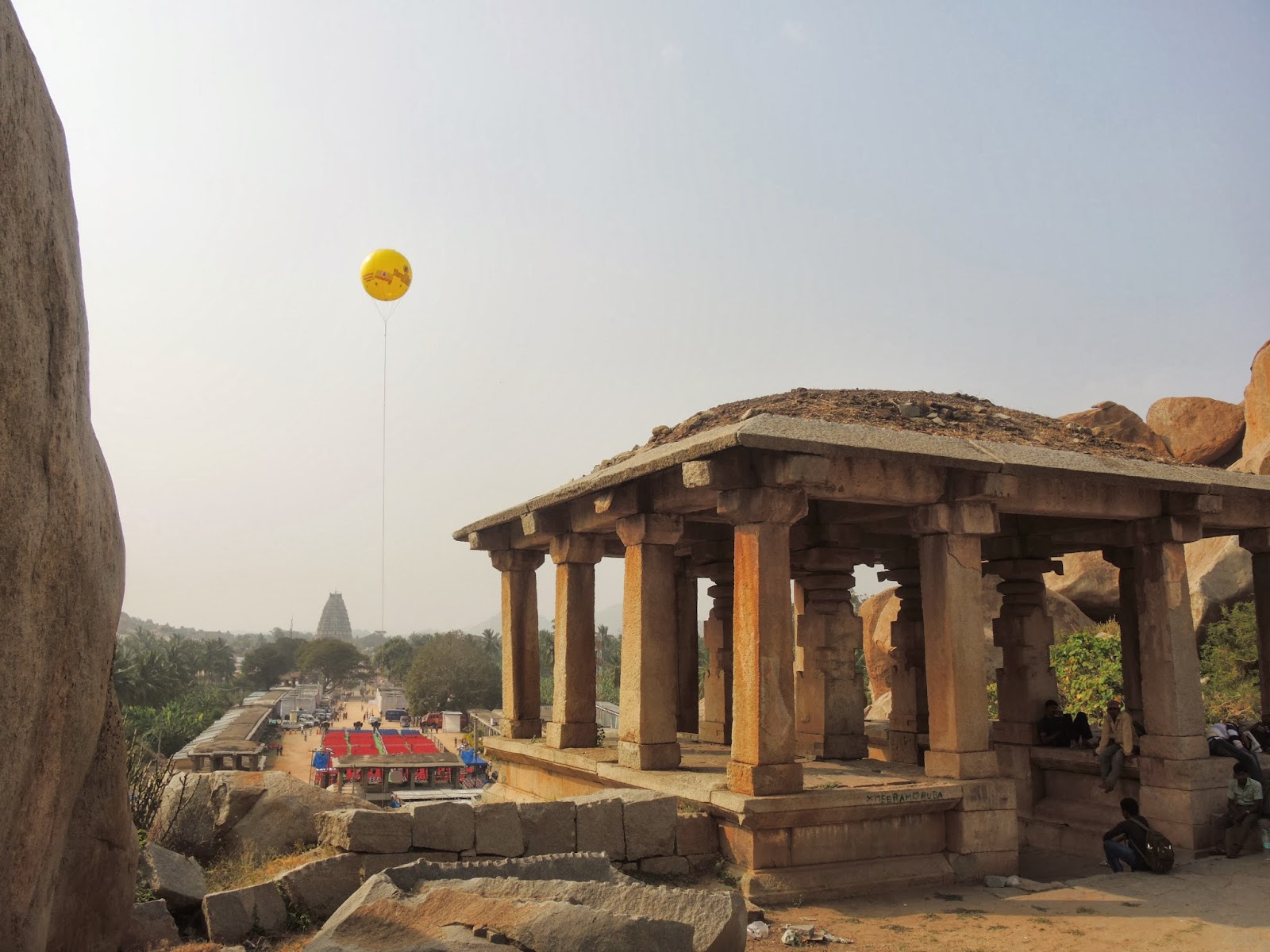 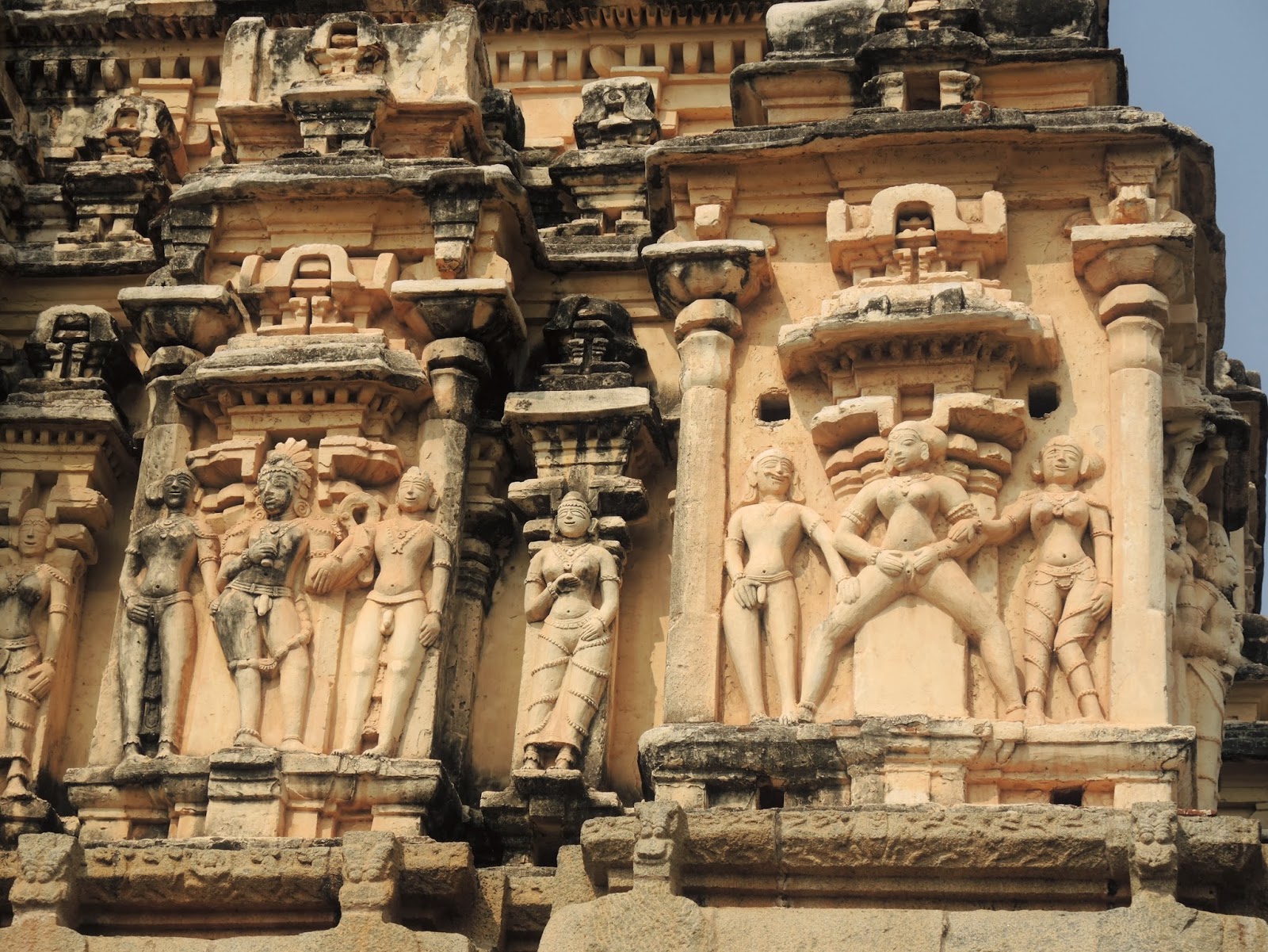 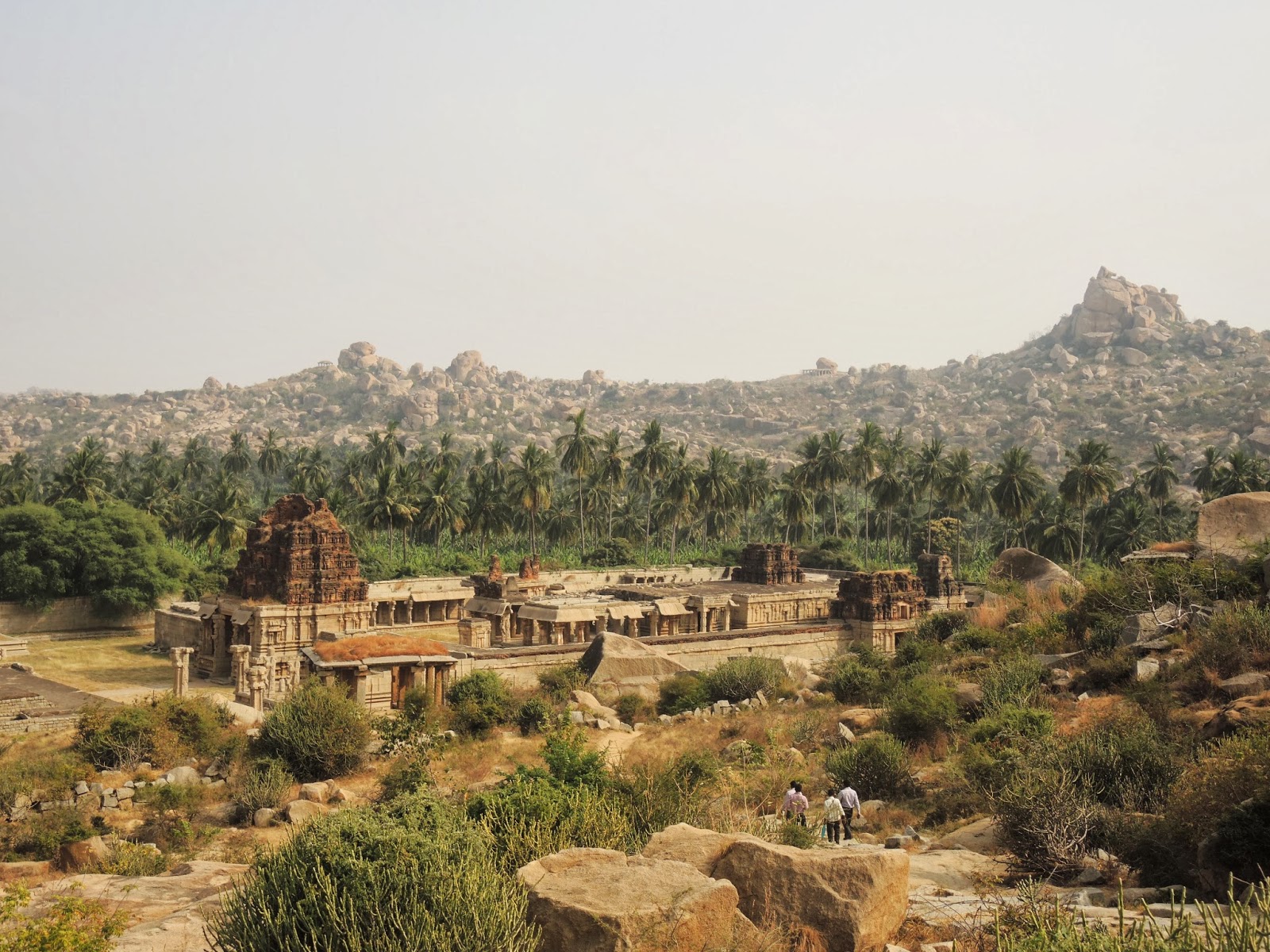 We were only 13km down the road in Hospet so it was very handy to pop over and back by bus or by rickshaw each day. And during our 4 days in the area, we really saw the best and worst India had to offer. But we’ll come to all of that in time. As it turned out, the annual Hampi festival had just started, and you may think that was superb planning on our part, but honestly, we had no idea! Just a stroke of luck, although, it was probably more bad luck than good, as it just meant that the place was overly crowded. Still, we had two days of festival and two days of peace, so at least we got to experience both sides. 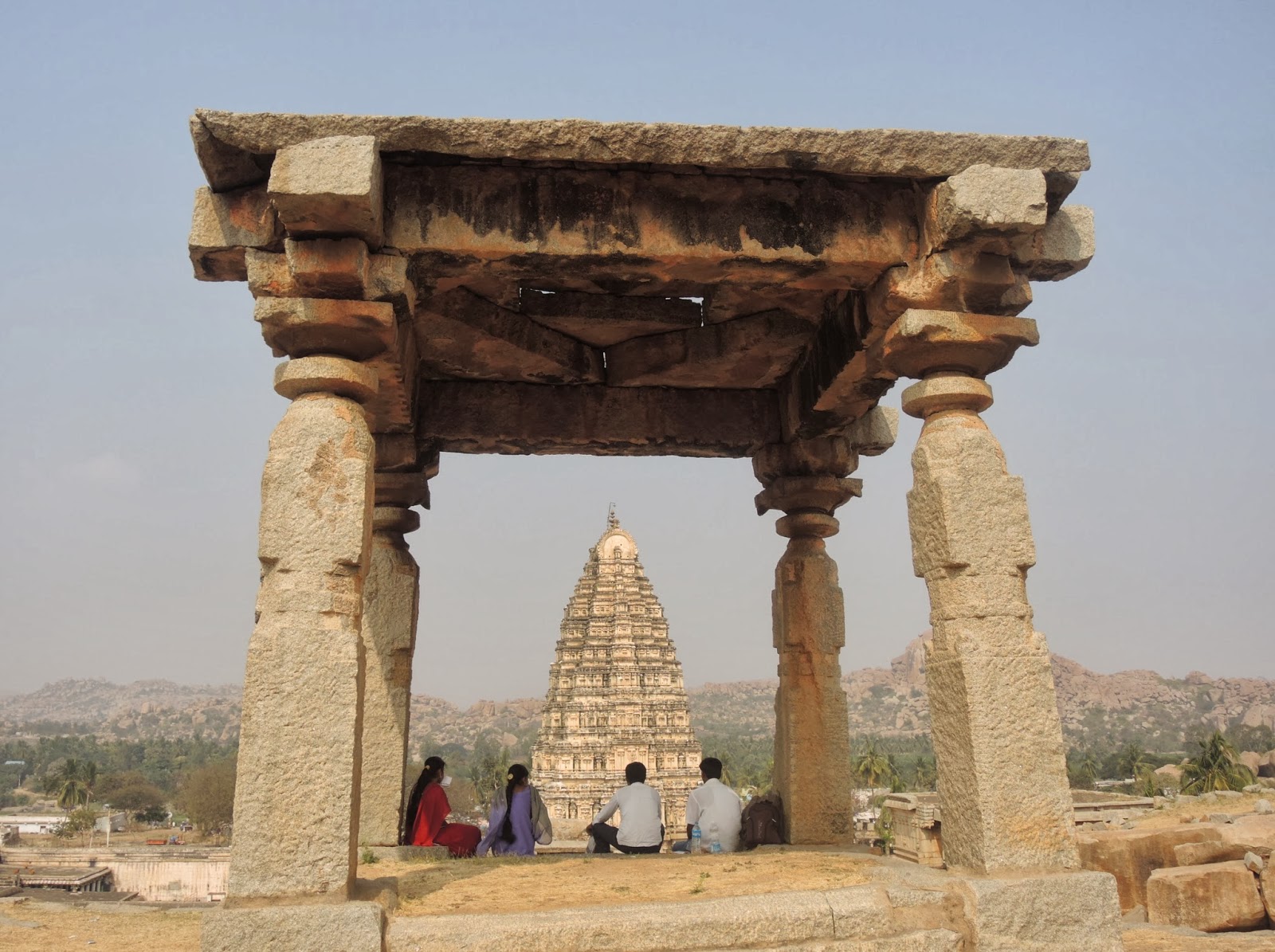 The whole complex stretches over 26 square km, so we had to divide it into a few bite-sized chunks to make sure we got to see everything. On day one, we tackled the area surrounding Hampi Bazaar, the highlights being the symbolic Virupaksha Temple, and the monkey-infested Achutaraya Temple. I've noticed this before but it keeps proving itself truer and truer every time: monkeys love ruins! You go to any ancient city in the world, walk along the streets - no monkeys, visit the shops - no monkeys, but as soon as you pay a visit to some crumbling temple or former citadel - monkeys galore! Such historical connoisseurs. 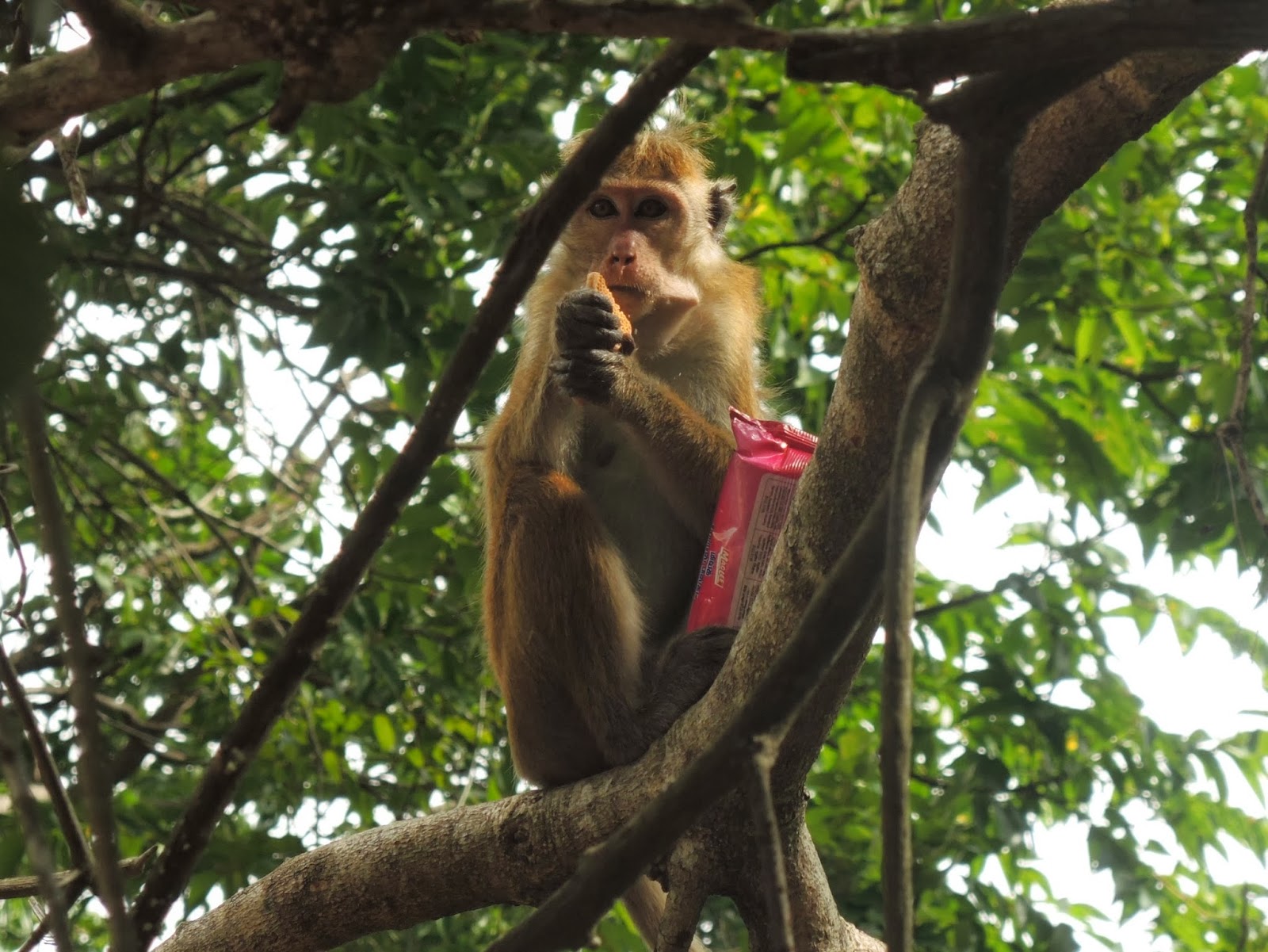 I just don't know what the attraction is! Well, I guess I do -  people. And more specifically, unsuspecting tourists with, soon to be ransacked, bags of food. They're so sneaky! And a bit intimidating to be honest, some of them are enormous!


Hampi is a lovely place with great natural scenery besides the ancient buildings. It’s like what I imagine the stone age was like, or at least my picture of it from cartoons. I guess what I’m saying is that the landscape is just like the Flinstones, with massive cartoon-esque rocks at every turn. 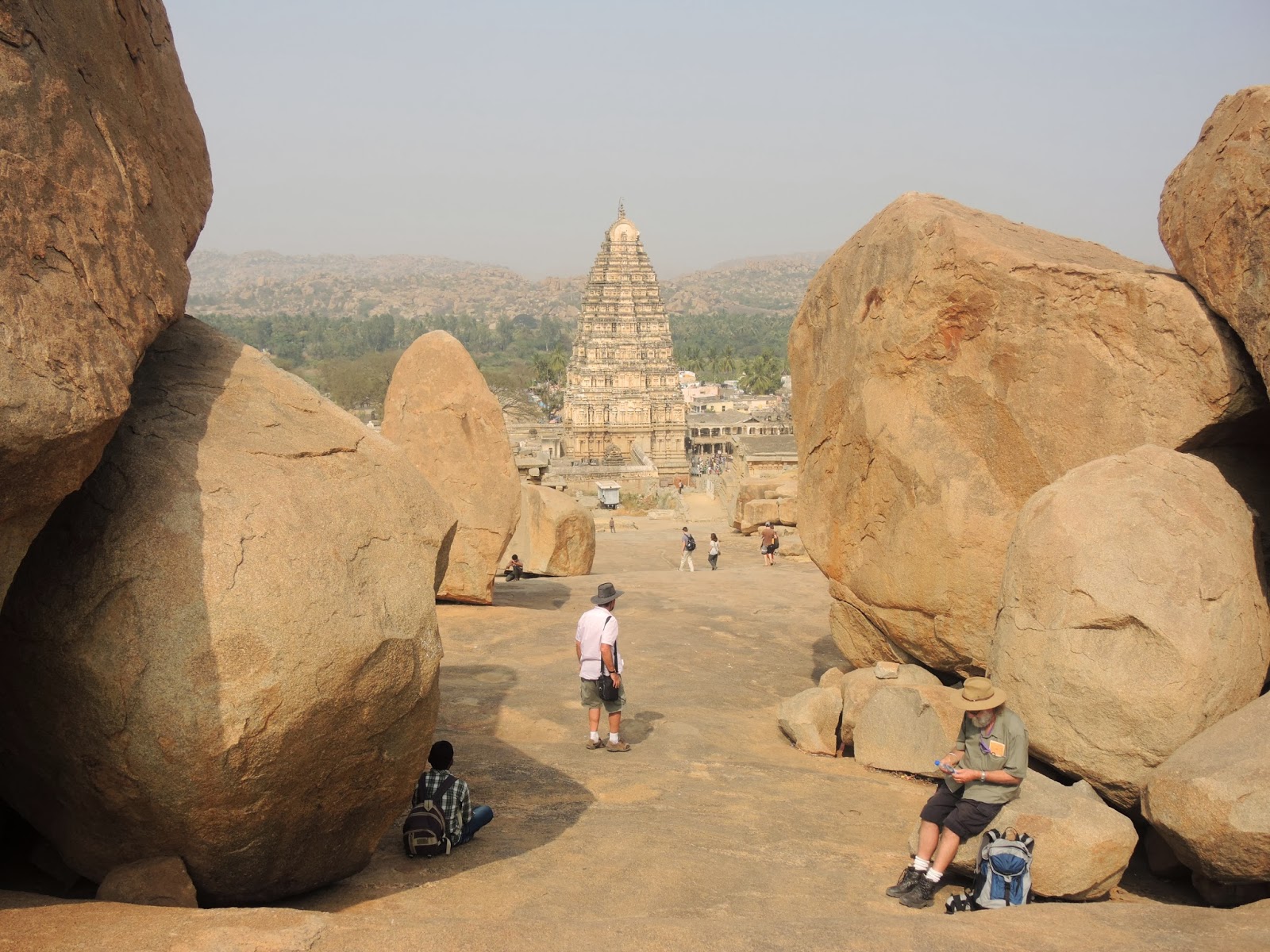 Those monkeys were bold, but these rocks are boulder!

Sadly the locals didn’t seem to be embracing a typically Flintstonian lifestyle, which was thoroughly disappointing; no mixing cement in a pelicans beak or using an elephant as a vacuum cleaner, or any such animal based appliances. 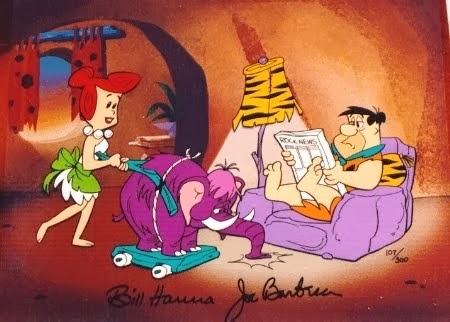 The next day, we returned to Hampi once more, this time visiting the Royal Enclosure, including the Lotus Mahal and the Elephant Stables (well, housing a dozen elephants, they’d want to be pretty stable!). It was again really beautiful, and only added to our glowing opinion of the place. 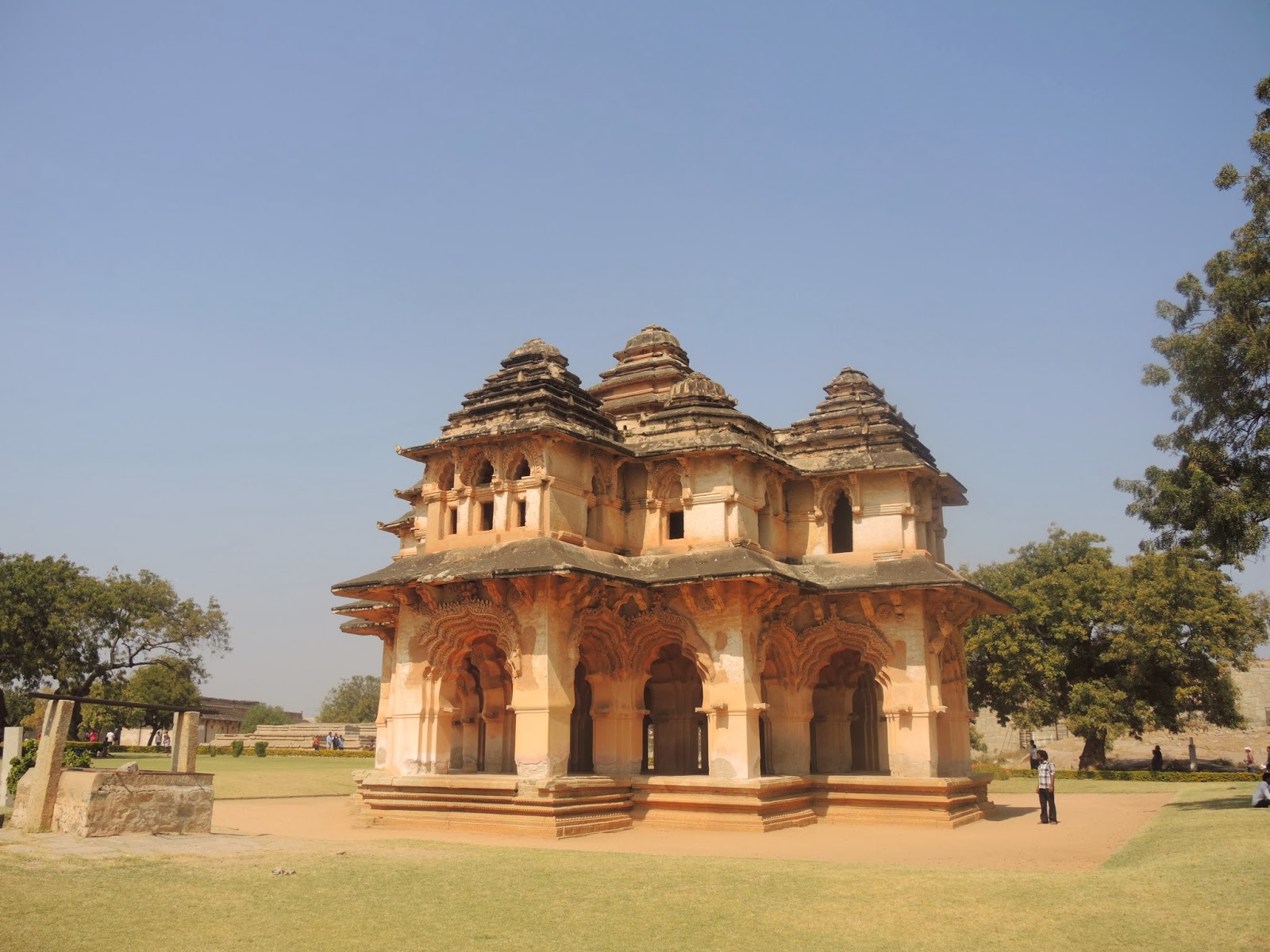 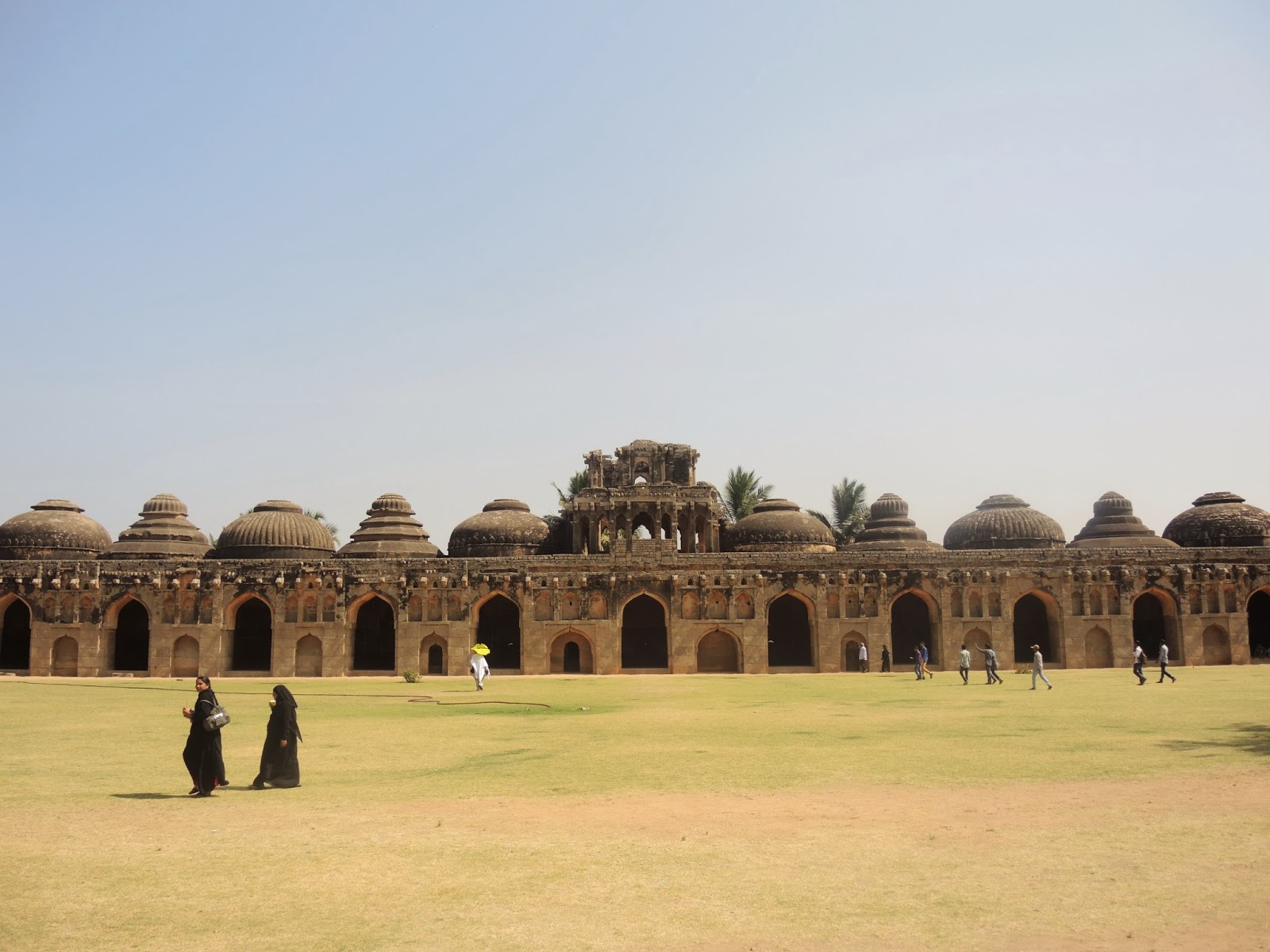 But I did mention there was a negative side and, I hate to say it but, it was the people. They were so rude and obnoxious. We had experienced it on our first day here, but on day two it really went to a new level. Everywhere we went, there were locals gawking at us, shoving cameras in our face, trying to take ‘sneaky’ pics which couldn't have been more noticeable. It was like being celebrities, in the worst possible way! There were people actually asking to take photos with us as well, which we didn't mind, but in the end was just as annoying because once we started posing with one person, a crowd would start to form and suddenly people were queuing up (or just pushing forward, this is India after all) to get in on the act too! So every time someone asked us, it would be ten minutes before we could move on again.

We had this before in China - people staring, always asking for pictures, but it’s very different here. In China, they were just naïve and you were a novelty to them, so they wanted a picture. But here, there was just a different feeling (especially since 99% of the people asking were men), and I think that if it was just me, they wouldn't have had much interest. I know it’s a generalisation, and obviously not true for all, but Indian men are just really sleazy. 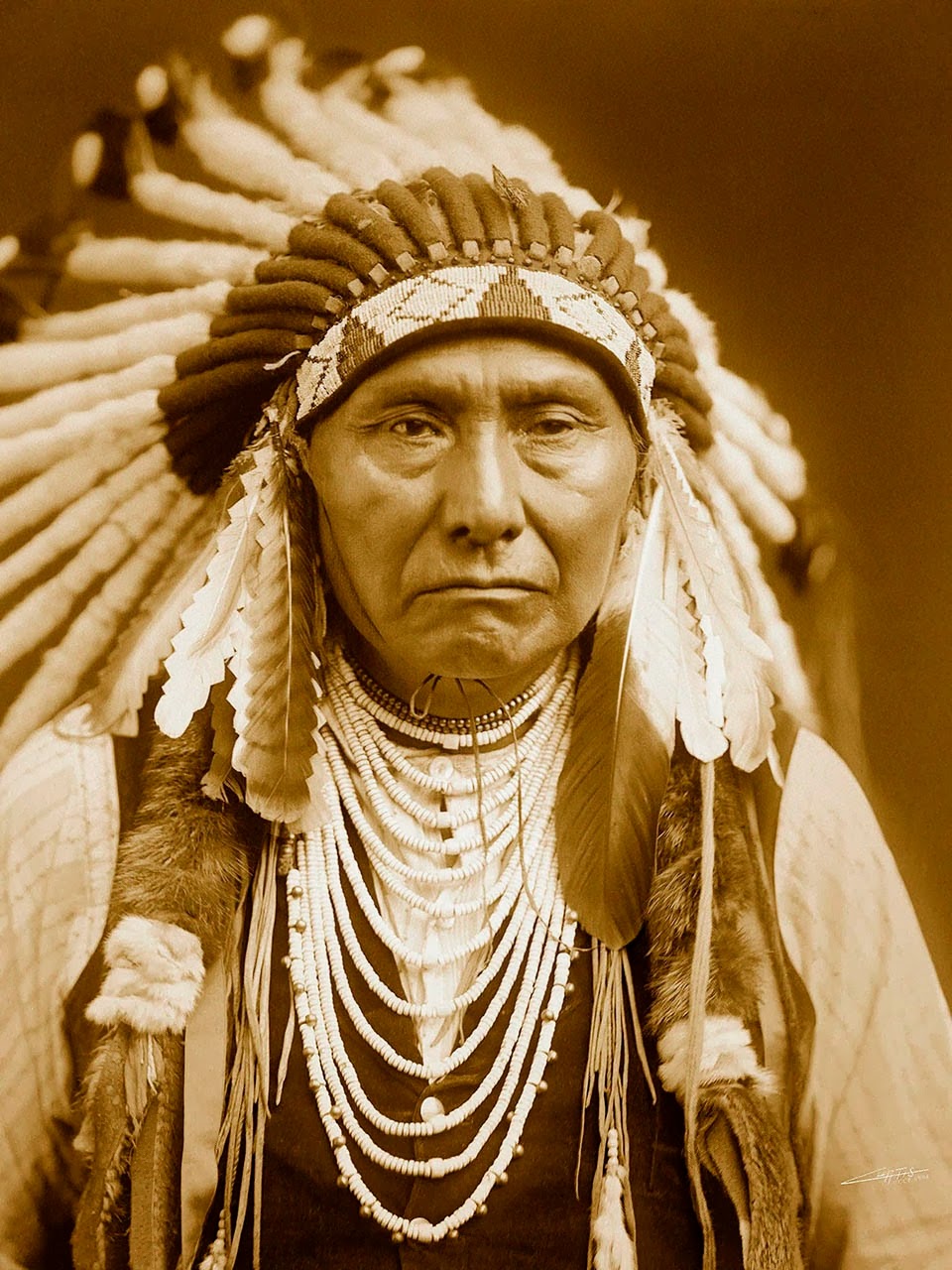 But seriously, they’re the worst we've ever encountered. Even when they don’t approach you, just the way they stare is sickening. And I’m not even a woman! We couldn’t just say no either as a) we’re too nice (obviously!), and b) everyone you meet asks you where you’re from, so we didn’t want to give Ireland a bad reputation. In future, we should just say we’re from England and tell them to fuck off!

Some people were actually very polite and respectful though, so I feel bad tarring them all with the same brush. 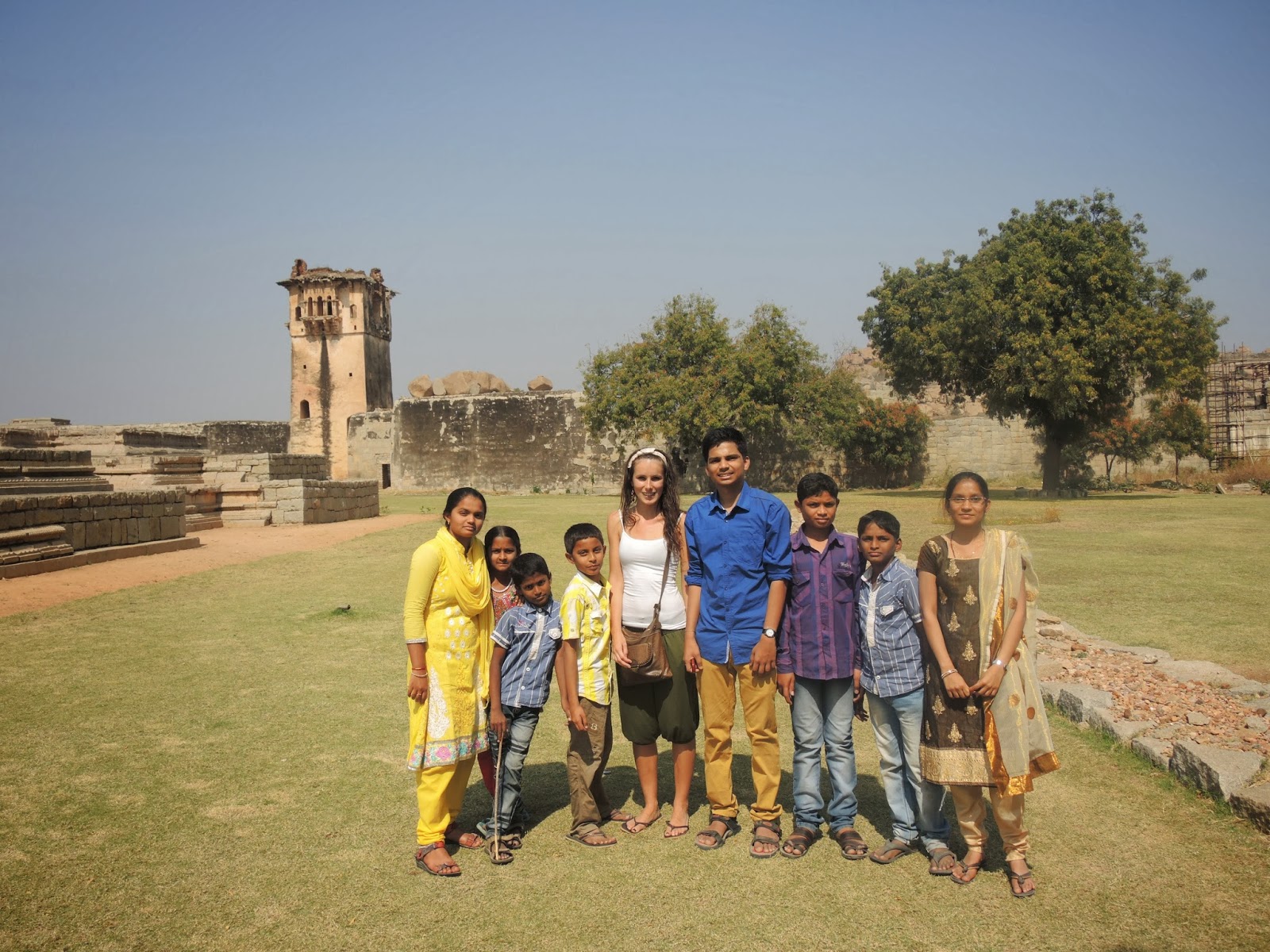 That afternoon, we returned to the safe haven of our fancy hotel and went for a dip in the pool. It was pretty quiet too, although about 20 minutes later, it suddenly became packed (I guess that’s what happens when you’ve got hot bods like these!). We were done at that stage anyway, so were just happy to sit on the side, but we probably got as wet there as when we were actually in the water! Not from kids splashing us, but from adults actually trying to swim properly, you’ve never seen anything like it – arms and legs flailing in all directions, water flying through the air – it was more like a Jacuzzi than a swimming pool. Now I know why India never win anything at the Olympics! 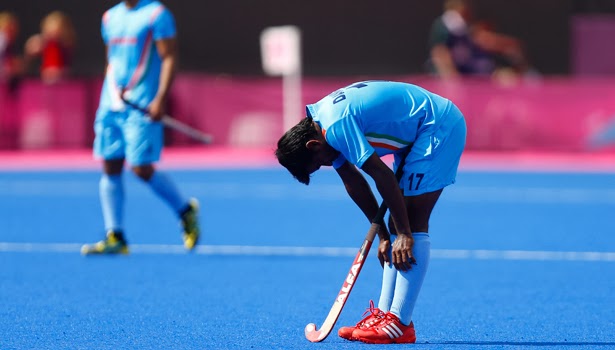 I feel like I’m being a bit harsh here on the Indian populace, but with over a billion of them around, of course it’s always going to be hit and miss (and mostly miss…).


Seeing as I’m talking about Indian people, here are a few more notes:

- Everyone has a moustache here, I just don’t get the trend! I wouldn’t be surprised if Indian babies come out of the womb with a full blown tache, even the girls!

- Vegetarianism: they're all doing it! Around 40% of the population are meat free, which is a big percentage in itself, but especially when you consider that that equates to almost half a billion people! There are actually more vegetarians in India than the rest of the world combined!

-         -  The Indian head wobble; what is it?! It’s not quite a nod, it’s not quite a shake, it’s just some strange, figure of eight cycle that usually denotes confusion, but frankly could happen at any time.

It’s actually quite helpful sometimes though as it acts as a good tell that someone has no idea what they’re talking about. In other countries, you might be lost and ask for directions, and you only realise 20 minutes later that the person you asked didn’t have the foggiest where they were pointing. At least here, when you see the wobble, you know to immediately forget everything you’ve just heard. I should try to get in a few games of poker before we leave here, you could make a killing!

Thankfully, that was the last day of the festival so the crowds soon departed and we had relative peace and quiet for the remainder of our stay. And so, the next morning, we hired a scooter for ourselves (it's good to be back in a country that doesn’t require silly things like an international licence!) and probably had our most enjoyable day in town. 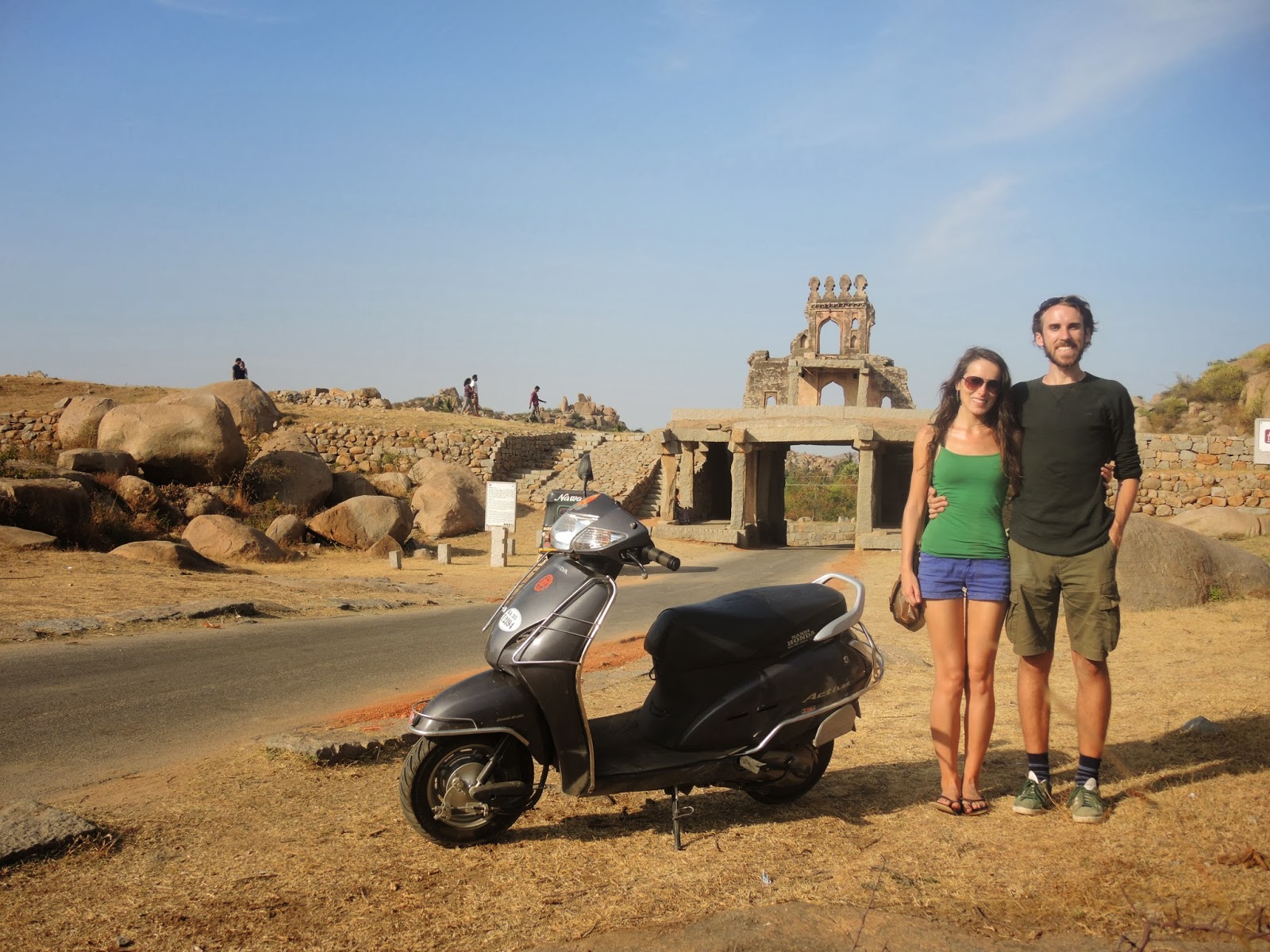 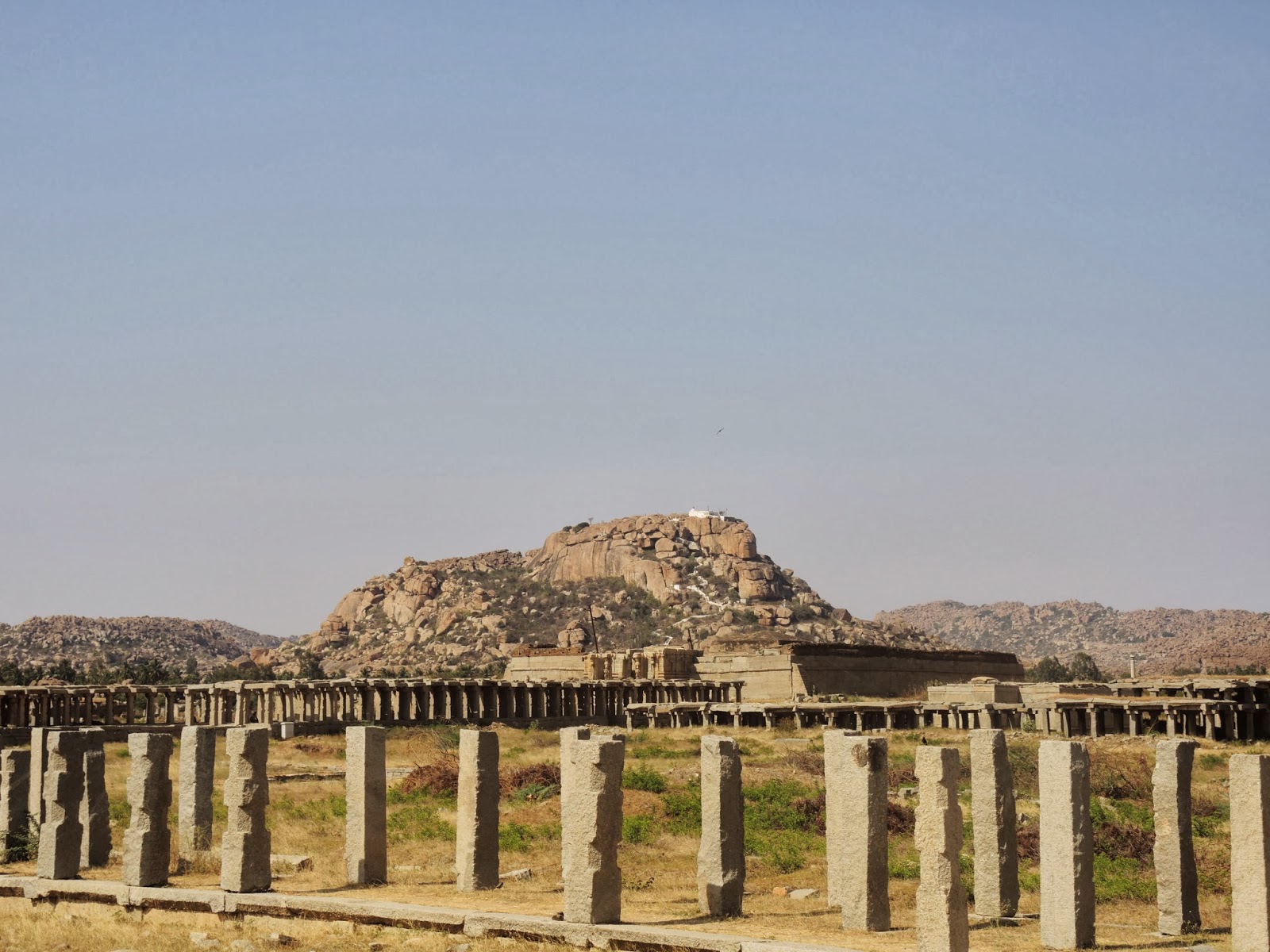 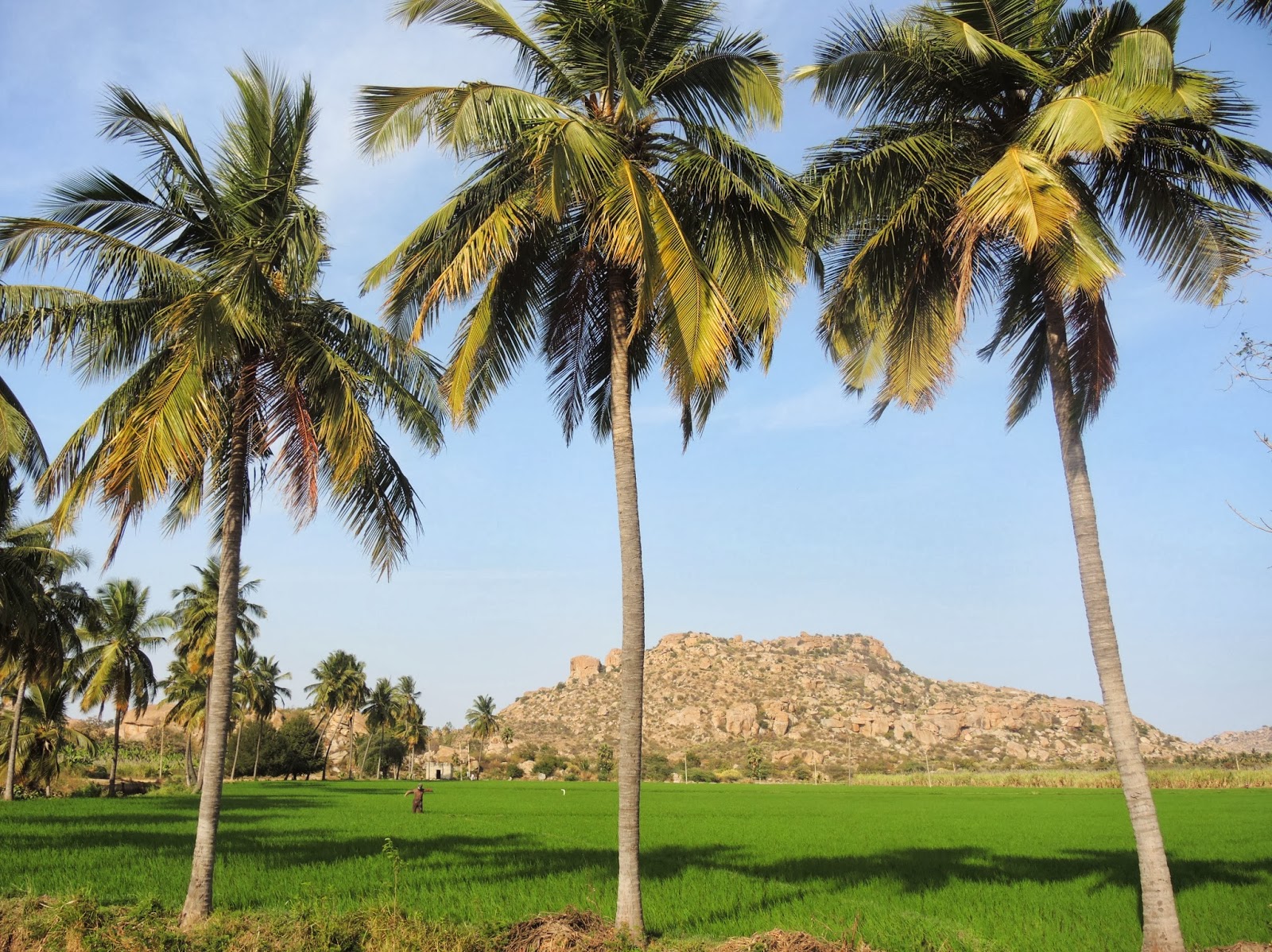 We spent most of the day just zipping through the countryside. Hampi really is a lovely place with great natural scenery, so there's a lot more on offer than just the ancient ruins. Our only real stop was at the Vittala Temple, famous for its stone chariot which, like everything else here, was incredibly impressive. 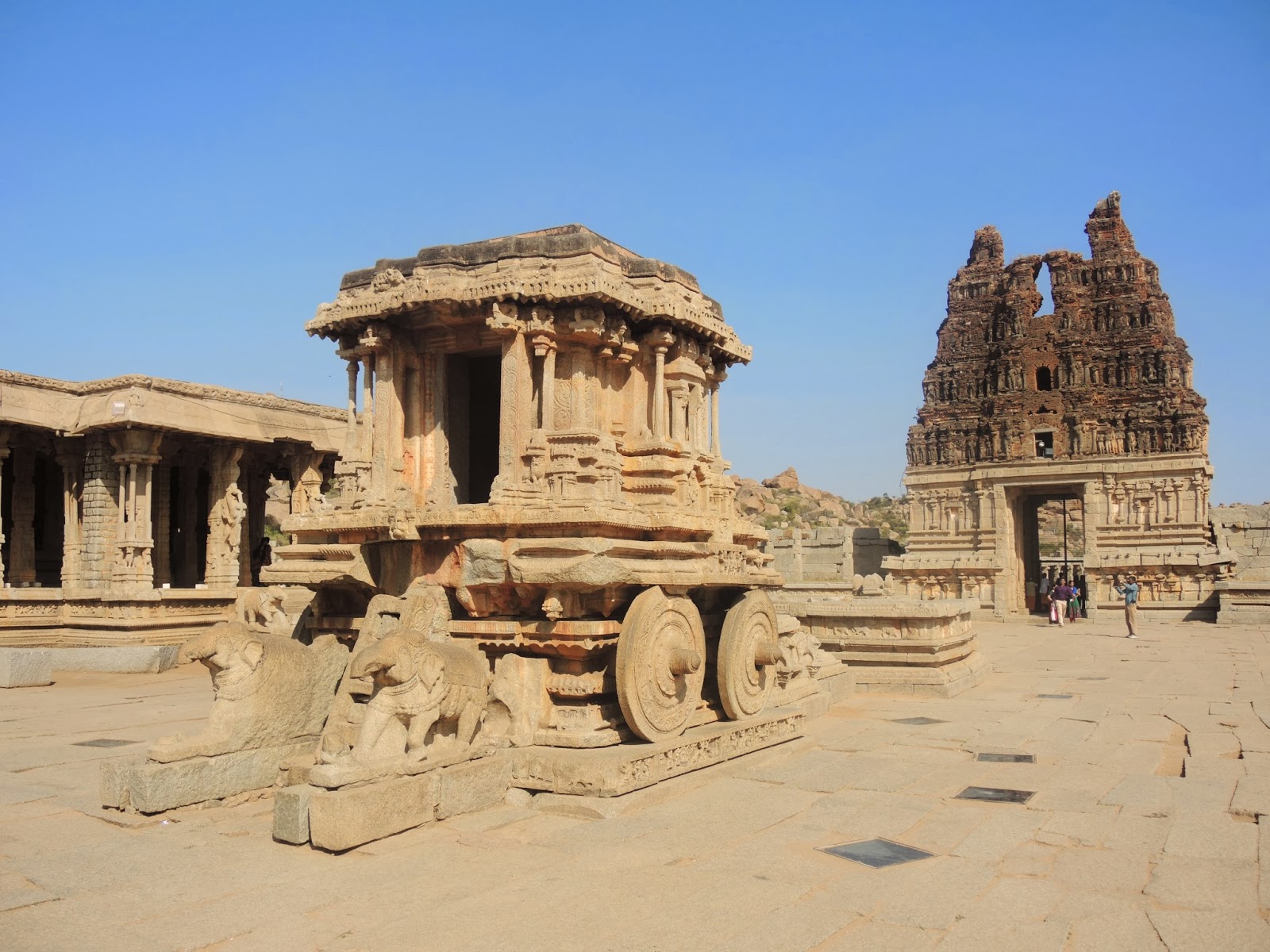 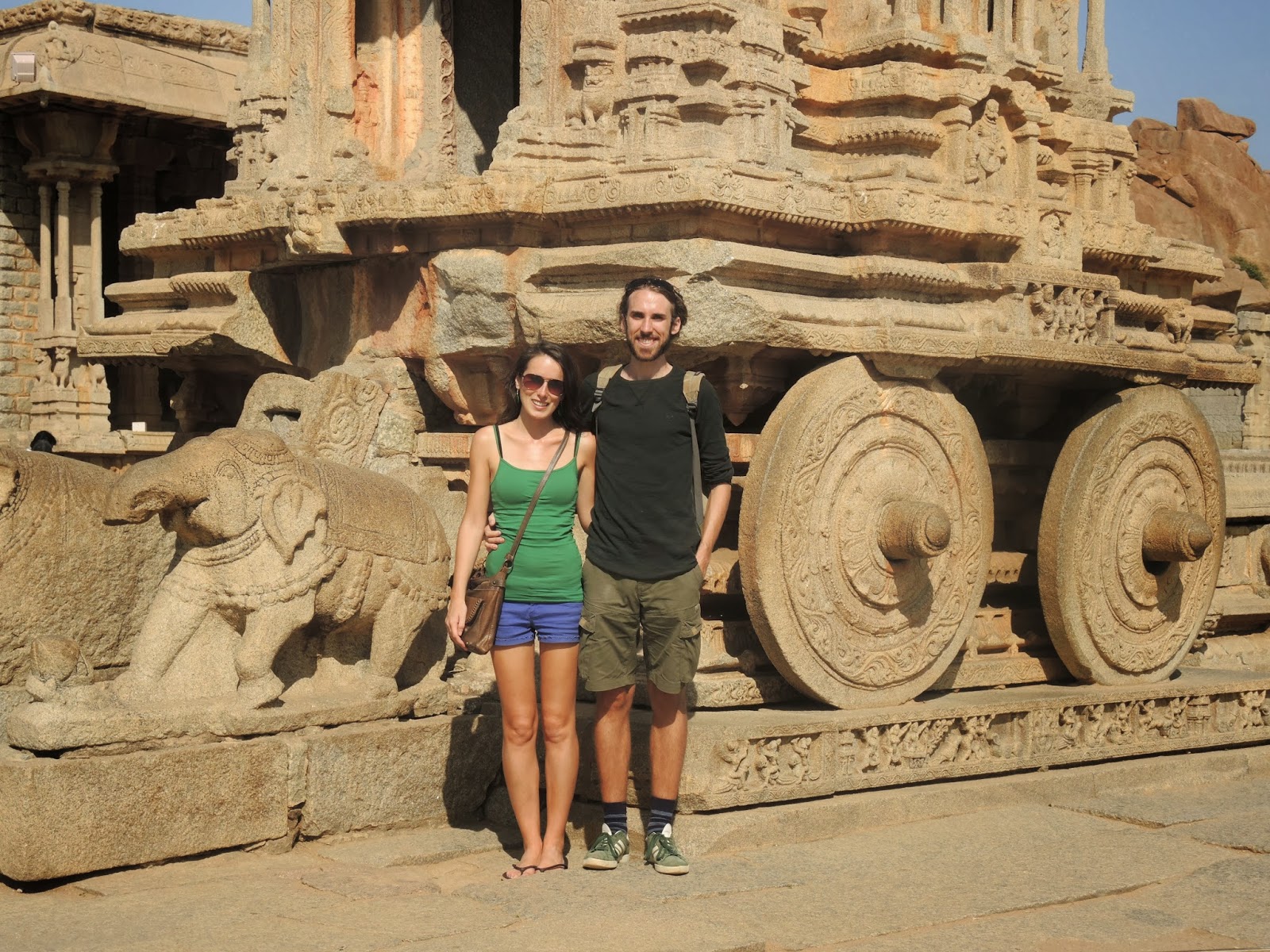 I can understand how you'd carve a statue or even a temple out of stone, but how does one go about carving a whole chariot?!

Seeing as we had a bit of peace and quiet, we made our video diary on the grounds:

Final day, and as we had seen pretty much everything of note in Hampi in the three previous, we had the luxury of pure relaxation – a nice treat seeing as our Indian schedule is quite go, go, go. We once again chilled by the pool, ordered some fine food and tried to come to terms with leaving our little palace. (I’m sure every waiter that came up to the room was banking on a huge tip from the ‘big spenders’ in the executive suite. Boy, were they disappointed!) We did also have some work to do, finalising our plans for Nepal in a few weeks’ time, but I’ll save the details of that until we’re actually living it!

The following morning, we were up at the dawn for our next trip west to Goa. There were unfortunately no night trains we could have taken (on this date at least) to speed the journey along, so it was quite a long day for us, 12 hours in total by train, taxi, bus and rickshaw, but we got there in the end, and the pristine white beaches that greeted us made the journey all worthwhile.
Posted by Mark O'Leary at 3:10 AM