As our summer drew to a close, Busan just proved what we already knew - second cities are the best cities! The last two and a half weeks have been great, with time spent in Busan and Jeju, as well as a small side trip to Gyeongju. They've really clawed back South Korea's reputation after Seoul's less than impressive welcome. As for Busan itself, it was the perfect place to wind down after a thoroughly action-packed summer - a cool city, great beaches and on our first day here, a guy high-fived me for no reason! He didn't even say a word or break stride, just kept on walking! He must have sensed my second city vibe. 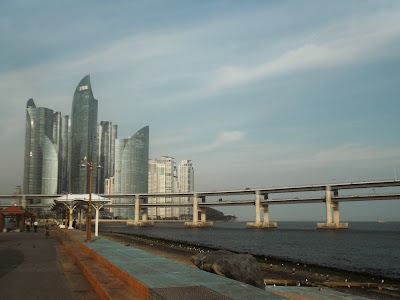 As I said, we just enjoyed a chilled out time here, so not a huge deal to report. We were staying in the Haeundai district of the city; a really cool area right on the beachfront. So, we spent a bit of time on the beach there, and also the nearby Gwangalli Beach, with a nice walk in between the two. Sorry, a lot of this isn't going to be that interesting at all... 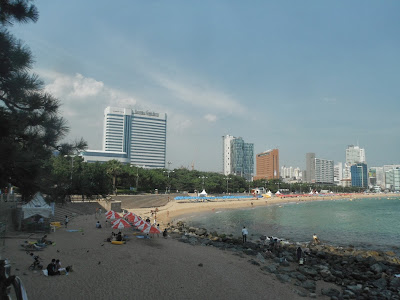 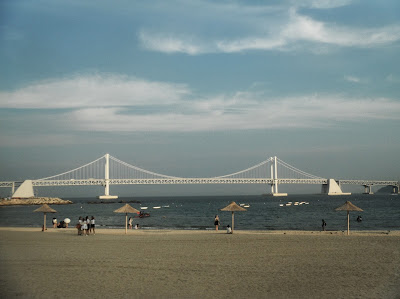 We also passed by a group of soldiers along the way, marching in formation. When I stopped to take some pics, not only did they not seem annoyed, they actually smiled and waved - a very different reaction to their cousins up north. 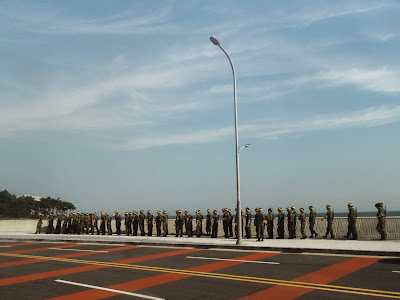 On day 2, we visited Jagalshi Fish Market, the largest such market in Korea. Aside from your standard varieties of fish and whatnot, they also had all kinds of weird and wonderful treats on offer; with octopus, squid, shellfish, sea cucumbers, on top of a whole host of things that still remain a mystery. It was basically the who's who of foods we wouldn't touch with a bargepole. We, of course, had no intention of buying, but it was still interesting to walk around and have a gawk at some of these monstrosities, even if we had to hold our breath for the duration of our visit. 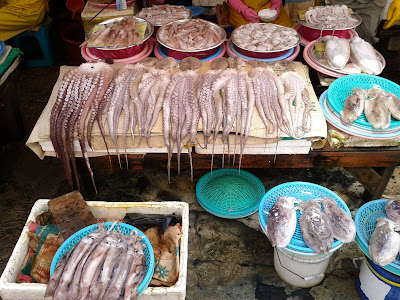 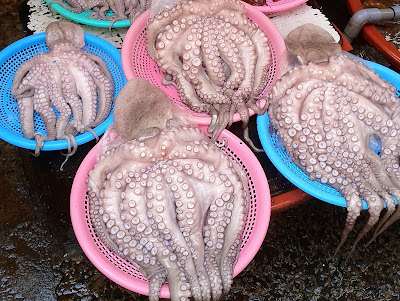 Later the same day, we took a stroll around the coastal area of Taejongdae, before making our way to the UN Cemetery for those who fought in the Korean War - the only UN Cemetery in the world, as far as I know. There were plaques with the number of soldiers who died from each country, as well as a full list of names. Nobody from Ireland though... I don't know if that means no Irishmen fought in the Korean War, or if loads of us fought, just none of us died... I prefer to believe the latter. 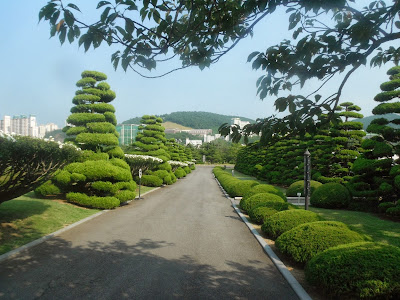 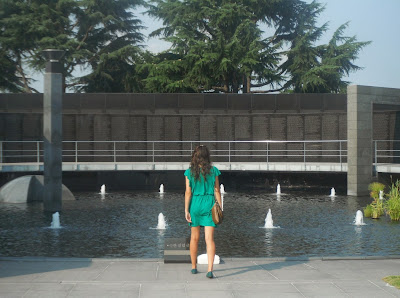 Back in Haeundae, we were very pleased to find that our hostel was right around the corner from an Irish pub, so we ate there a couple of times during our stay. We're lucky really that even though we're from such a small country, Ireland is extremely well represented on the world stage, and you'd be hard pushed to find a country or major city anywhere on Earth without an Irish pub in it. As I'm sure you know, we can be quite picky with our food sometimes, so finding an Irish pub in a new city is a great little treat. I don't know what we'd do if we hailed from a lesser country, i.e. any other country!

On our third day in town, we hopped on a bus and went on a short trip to the nearby town of Gyeongju (not to be confused with Gweongju or Cheongju which also leave from the same station). We stayed overnight too. It was a nice enough place with a lot of history attached, but in a lot of ways, it was nothing that we hadn't seen before. I know I'm probably sounding like a broken record now, but at this stage, we've reached our maximum temple capacity. 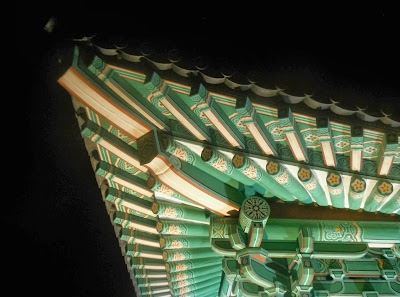 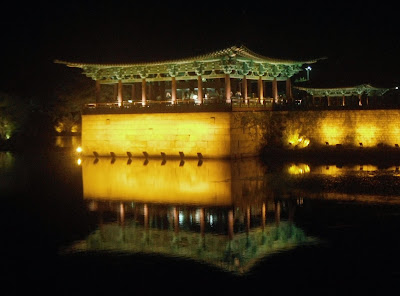 While in town, we also rented a couple of bikes for the day, and pedaled our way around the different sights, including Wolseong Park, and Cheonmachong - a Newgrange-esque hill tomb (but not as good as Newgrange obviously), one of many in the area, but I think the only one in the whole country that you can actually go inside. 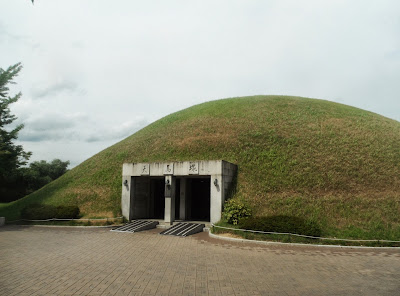 Just like our final stop in Shanghai last summer, Busan really served its purpose as a nice breather from a summer of adventuring, before we had to come back to reality again. So in that sense, we loved the place, although I'm sure it's not too thrilling from a readers perspective.

In our last couple of days here, we did very little at all. We had planned a trip up to the city of Daegu, to meet up with a lovely guy that we had met a couple of weeks beforehand in North Korea (he was Irish, not actually North Korean), but when we got to the bus station, the queue for Daegu was a mile long, for some reason, and there was no chance of us getting there any time soon. (We later found out that there been a train crash on the Daegu line, and so that's why the buses were packed out). It was a shame, seeing as we had actually planned to do something, so instead we just went to the cinema and ate ice-cream! And on that climactic note, Busan was done! Here's your customary video diary:

All that was left to do was pack our bags, and get ourselves back to HK. It was a very scenic flight too may I add! 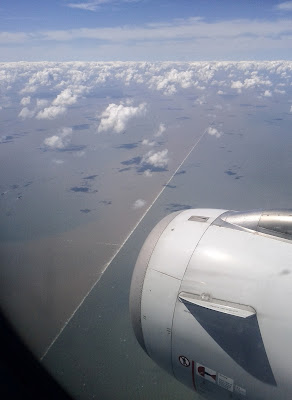 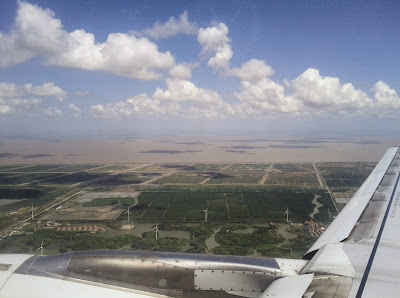 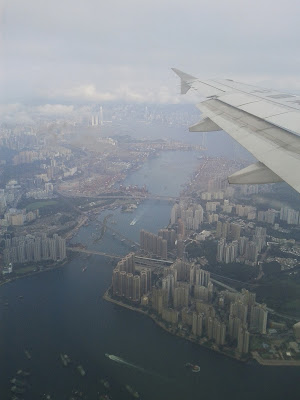 And that was Busan, a lovely city and definitely the heart and soul of the country (well, the heart at least. I guess the Seoul is already taken...) It was also a nice way to round off our most memorable travel stint yet! All the way down from Russia, through Mongolia, China and the Koreas, North and South - you couldn't hope for a more diverse and unique array of destinations. This will also be our last extended summer break, as we will very soon (tomorrow in fact!) be leaving HK for good. But fear not, we've still got one big adventure in us before going back to the real world, so fasten your seatbelts for our last three months in Asia!

You want Sri Lanka? We've got you covered!
India? How about six weeks worth?!
Nepal? It would be rude not to!
China?! ...well, it's a big country, you'll have to be more specific...
Yunnan Province? Hell to the yes!

So stay tuned! Live updates will be coming soon!
Posted by Mark O'Leary at 10:40 AM