We've had a great summer so far, and some of the places we've been and things we've seen will certainly be up there competing with the best of them when the dust has settled and we look back over our Asian travels. And with our return to Beijing, we have another contender battling it out - shortest, most uninteresting blog entry! Seriously, we did nothing here! I don't even know why we came back! Well, I do, but we'll get to that shortly...

After getting little to no sleep on the train in from Hohhot, the first half of the day was pretty much a write-off once we arrived at our hostel (Lucky Family Hostel - really nice!). That evening consisted of eating enough pizza to also make the second half of the day a write-off!

We were a bit more active the following day, although we had seen most of the main sights already last summer (the ones worth seeing anyway), so we just followed a Lonely Planet walking tour, and went for pizza once again that night. Chinese food is the best!

We did do one touristy thing in our few days here, visiting the Bird's Nest - the Olympic Stadium from the 2008 games - even if we didn't actually go inside. 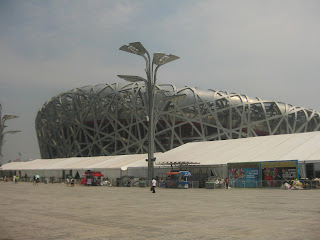 The main reason we went though was because across the road is the Water Cube - formerly the Olympic swimming stadium and now a water park! A pretty logical renovation, I guess. We had high hopes as we're pretty big water park fans (who isn't!?), and it was listed in CNN's top 12 list of such parks anywhere in the world. 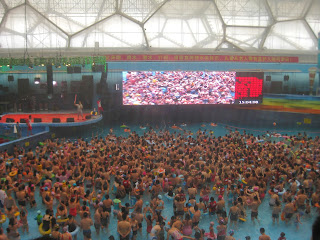 As water parks go, it actually wasn't that good anyway, but when you add in the population of your average European country, it should put the Water Cube on top of anyone's Beijing black list.

And just in case you needed further convincing, remember, these people have no qualms about taking a piss inside an ancient temple or on a busy highstreet. Imagine what goes on below the waistline in a place like this with nobody watching! I'd even question the legality of calling it a "water park". Surely, the 'water' to 'other bodily fluids' ratio is off the charts!

In fairness, we did also get to see parts of the original Olympic venue, so there was at least one minor saving grace. 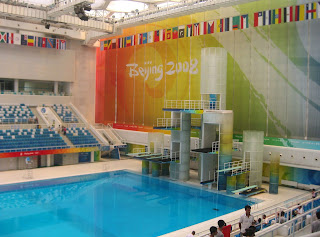 So, as you can probably tell from our highly uneventful time here, Beijing was never a place of interest for us this summer. The only reason we came back here was to use it as a gateway, the only gateway in fact to our most adventurous / potentially dangerous / what-the-hell-were-you-thinking destination yet - North Korea. 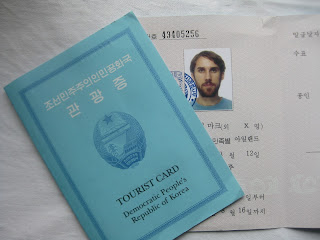 We've already been and gone at this stage so no need to worry, but that blog entry will be coming up next, so if you're only going to read one piece this summer, make it that one! (Although, presumably you're just after reading this, so I guess you've maxed out your quota already... kind of a waste really... sorry about that)
Posted by Mark O'Leary at 8:35 AM