Back in Myanmar - the unanimous winner of best everything on our first jaunt around the Orient in November 2010, especially impressive seeing as we actually only spent four days here. An awful lot has changed since then, both for us and the country. It's hard to believe that little more than a year has passed.

One difference that we weren't too pleased about though - the number of tourists around the place. The last time we were here, you could go days without seeing another white face, but now they were everywhere! We know it's good for the local economy and opening the country up to the international community, but part of us couldn't help feeling like 'Hey! This is our country! Go find your own!'.

Still, even though so much has changed, it was nice to know that some things had stayed the same.


That's right, as soon as we touched down in Yangon, our old friend Zaw Hein was there to greet us! It was lovely to see him again, and catch up on what had been happening in the country over the past year. The first time we were here, it was the day after democratic leader Aung San Suu Kyi had been released from house arrest, and since then, both she and the country have gone from strength to strength. Zaw had some good news too with the birth of his first child, so it was smiles all round! Rather unlike the first time we landed in Yangon...

Zaw sorted us out as usual that morning; treating us to breakfast, arranging our flights up the country, taking us to get our money changed (which you can now do in banks, instead of dodgy back alleys...) and bringing us to our hotel, the same one we had stayed in first time around! We even got the same tiny, tiny room! It was good to be back.

After getting all of our business sorted in Yangon that morning (and after a midday power nap), we went to Shwedagon Pagoda - the most famous landmark in Myanmar. I don't really know why we didn't go there last time around... 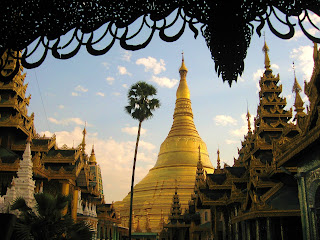 It was a very beautiful sight, towering over the surrounding area, almost 100m tall and glistening all golden in the sunlight. The whole area was very nice actually, with smooth, tiled floors and local monks walking around in their traditional garb - saying a few prayers and taking some sneaky pics with their digital cameras. 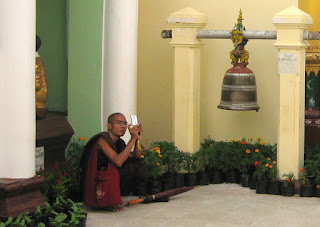 Even with the large number of tourists in the city, the majority of visitors were locals, there to give praise, and there was no shortage of stupas or Buddha statues for them to kneel in front of. We even found a shrine to C3PO! 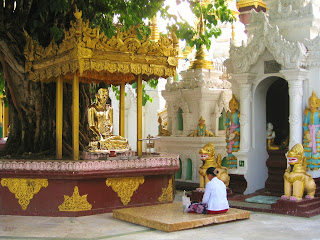 She must be a huge Star Wars fan.

We stayed for a couple of hours and as we arrived late in the afternoon, we were able to enjoy a nice, purple sunset there too. A lovely way to spend our first day back in the country. 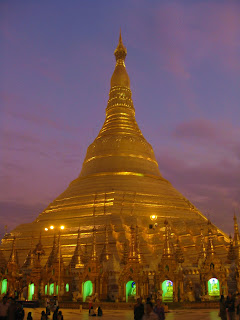 And the day wasn't over yet! That evening we went out for a nice traditional Burmese dinner with Zaw and his family. We payed of course, it was the least we could do after all the help he had given us. 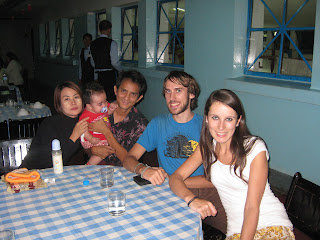 And that was the end of our brief stay in Yangon. The following day, we flew up to Heho and our next stop - Inle Lake. We'd have another full day in Yangon at the end of our trip, so we had plenty of time to see some more of the city. But for now it was, Heho, let's go!

Just like our last time in the country, we got a free meal on the flight up, despite it being little over an hour long, and as we landed in Heho airport, there was a woman at arrivals holding up Aisling's name. (Those are two things that we always get a great kick out of - free plane food and seeing our names on signs! I hope the novelty never wears off!) 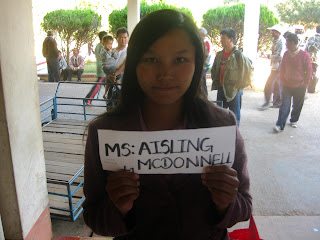 We stayed in the town of Nyaung Shwe, just north of Inle Lake itself, in a lovely place called Aquarius Inn, we were even given fruit, nuts and a cup of green tea as we arrived. As it was quite late in the day at that stage, we just had a walk around the town before retiring for the night. It was a very different way of life to what we were used to in Yangon, primarily as there wasn't the hustle and bustle of traffic, but also because it was frickin' freezing! We weren't expecting that at all!

And the next morning was even worse, we could barely tear ourselves out from under the blankets! Eventually, we got up and active for our day on the lake. We had travelled through floating villages before while in Cambodia last year, but this was just something else. It wasn't so much a floating village, rather a floating city, with some 80,000 inhabitants. 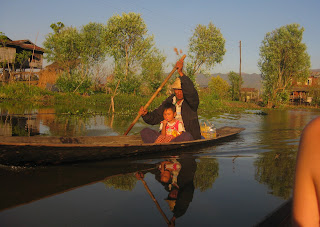 There's two of them anyway...

Our first stop of the day was Nar Baung Market, at the other side of the lake. The vendors were all lined up and ready for us with their souvenir stalls, but it was much more interesting to see the local market, with goods being transported from ox carts to boats, and vice versa - life on the lake really goes from water to land and back again so fluently. It's always nice to get a glimpse at a different way of living.

The most fascinating thing of all though, was just watching people paddle by on their daily routine, whether they were rowing by hand... 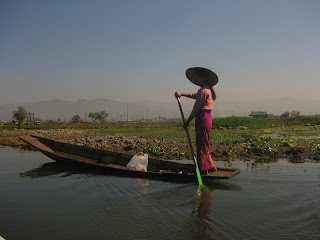 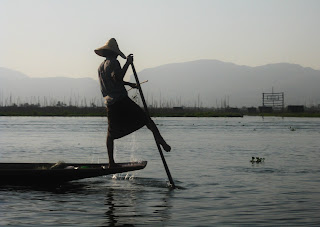 Leg-rowing is a bit of a tradition here on the lake (although apparently a lot of the locals just turn it on for the tourists). It consists of standing at the back of the boat and, well... rowing with your legs! Needless to say, we didn't give it a go ourselves.

After the market, we went to a couple of temples both on the water and on land. First, the very colourful, Phaung Daw Oo Pagoda, pictured below: 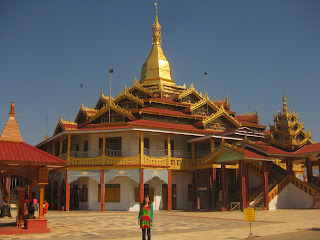 And then, the long walk up to the less impressive, Inn Dein. It was still worth going though, again just to see the everyday life, from locals doing their laundry in the river to carrying bundles of sticks on their heads. 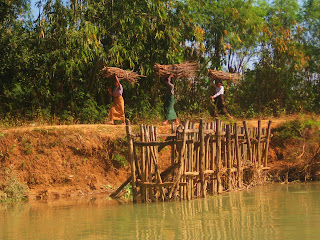 Also, on the walk up to Inn Dein, we bought a little carved wall-hanging from one of the infinite number of market stalls. It's funny, we've no problem when it comes to haggling for goods in countries like Thailand or Malaysia or even here in Hong Kong, in fact, we quite enjoy it! But we always feel guilty about doing it in Myanmar. Just because we love the Burmese and want to give them our money! There's also a tradition here in the market stalls of tapping everything in the shop with the money from your first sale, just for good luck. So, we were extra delighted to give this woman her "lucky money" for the day.

After lunch in a lovely lakeside restaurant, we went to see some floating gardens, and then on to Nga Hpe Kyaung or the "Jumping Cat Monastery", which is exactly what it sounds like. It's a monastery where monks spend their days teaching cats how to jump... and that's about it! It was the thing I was most looking forward to seeing that day, I was expecting to see cats flying all over the place, jumping through fiery rings and everything! We were sadly disappointed. I did take a video, but there are probably millions of better cat videos on the internet.

We did get another picture for our 'monks doing modern things' album though. In Yangon, we saw monks with digital cameras, monks on a motorbike, and now we have a monk texting. Who and what he would be texting, we've no idea - "jst made cat jump, lol jk". 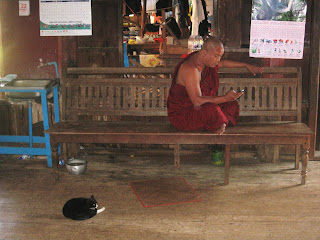 The next day we did some more exploring, this time on land as we went for a morning walk through some hillside villages on the outskirts of the lake. It was a pleasant change of scenery from the day before and a hell of a lot warmer! It was nice to be away from the tourist crowd too, back to just us, the countryside and friendly locals by the truckload, literally! 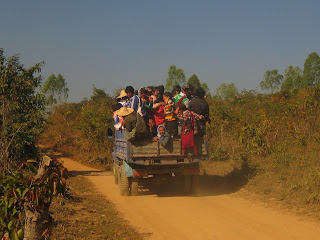 On the way, we passed a cave with an elderly monk at the entrance. It was pitch black inside and we had no torch or anything so he gave us a candle to light the way. He was so lovely, even offering us some tea and biscuits as we came out. It was quite eerie inside though, feeling our way through the cave, with nothing more than candle light. It felt like a horror movie waiting to happen... 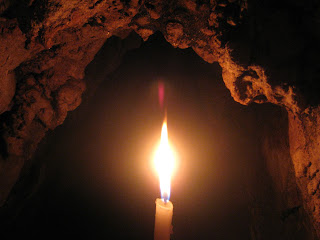 But despite that, it was good!

The rest of the day was just more of the same, wandering through the countryside, from village to village, under the hot sun. The locals really took a shine to Aisling during our time here as well - giving her flowers, telling her she was beautiful, one schoolboy even crashed his bike while looking at her, in typical slapstick fashion! I wish I had taken a picture, although I'm sure he was embarrassed enough as it was...

That evening, we continued our tour of the area, this time hiring out a canoe (equipped with a lovely local woman), to paddle us down small streams, and in and out of tiny floating villages. During the trip, I turned around and asked if I could take a picture of her, to which she replied with a really heartfelt "Thank you". It was quite touching, and I still don't know if she was thanking me for wanting to take her picture, or because I asked, instead of just shoving a camera in her face. 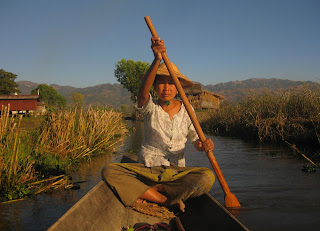 We didn't know what to expect from the experience at all, but it was probably our favourite thing we did in Inle Lake. It was just so quiet and tranquil, and you get to see so much more off the beaten path, or rather, off the... paddled stream...? 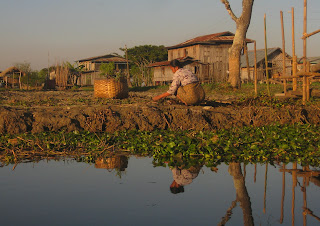 I've probably said it before, but it's just such a different world here.

We stopped off at an old monastery just before sunset, and had a good chat with an elderly monk there as we watched the sun go down over the hills. 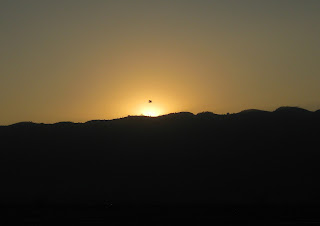 The next morning and our last on the lake, we hired a couple of bikes, just to round off our various modes of transport. We had already seen the place by boat, on foot, by canoe and now we were doing it on wheels! We were flying up to Mandalay that afternoon, so we only had a few hours to cycle around. There wasn't really anything in particular we were setting out for, we just spent the morning cycling up and down dusty, waterside paths, going wherever the road took us and getting lost, in a good way. 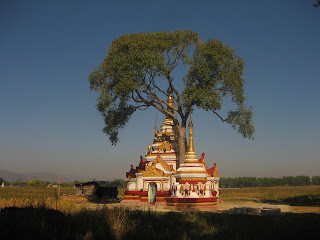 It's amazing what you find when you're not actually looking for anything. The temple above is probably one of our favourite sights form the whole trip, and I've haven't seen it mentioned on any maps or guidebooks. At one stage, we even went down a dead end in some small village, only to find a group of monks playing soccer in front of an old temple! 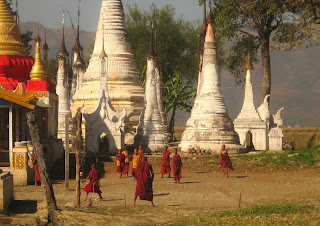 What will they get up to next?!

We cycled back, checked in our bikes and just chilled out in a cafe. I got a nice, cool banana lassi, while Ais ordered the cheapest thing on the menu, even cheaper than water, a glass of Mandalay Rum. It was really horrible. It may have only cost 30c, but she certainly paid for it the next day...

And on that note, we headed to the airport, off on the road to Mandalay! Part two coming soon!