Less than one week til our summer holidays, and I'm only just getting around to finishing the Easter blog! Sorry for the delay, I'll do my best to remember what actually happened... 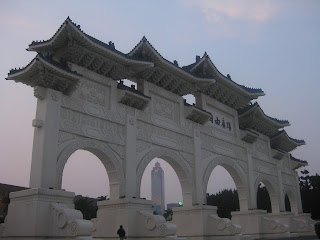 So, when I last signed off we were just after leaving Jiufen, on route to our next destination, Hualien. (Actually, on the way there, in Ruifang train station, I bumped into a guy who works at my main school in HK. I guess it just goes to show that no matter where you are in the world, you'll meet someone you know, even in the arse end of Taiwan!) As we arrived in Hualien station, we were greeted by our hostel owner, Lisa, who was ready to whisk us away to our accommodation. The hostel was amazing, and Lisa really couldn't have been nicer to us in our time there. She was a star!

As soon as we got settled, she got her 14 year old brother (cousin...? nephew, maybe...?) to show us to a traditional Taiwanese restaurant and order our meals for us. It's a good thing too, as everything was completely in Mandarin, and nobody had any English, (throughout Taiwan actually, people had very little English, compared to the other places we'd been in Asia anyway). The food was only so-so, but funnily enough, since we came back to HK, we've had Taiwanese food a couple of times, so we do kinda like it!

The main reason we decided to come to Hualien in the first place though (in fact, the only reason...), was to see the nearby Taroko Gorge. So, the next morning, Lisa dropped us and two other English guys off at the station, and we jumped on a train to Xincheng, the jump off point for Taroko, and only one stop away. We were planning on renting bikes out for the day, to see the place a bit better, while taking in a bit of sunshine too, but when we got to the bike shop, they said they only had one left, between the four of us... Now, I wont go through the whole story, but they eventually found another one... then another two... then a shed full of about 20 bikes for us to use! It turns out the guy was just an idiot and didn't know what he was doing. So, we got our bikes and set sail for Taroko Gorge! 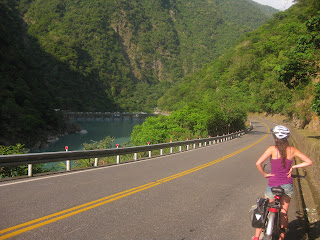 It's a huge area and a steep climb into the mountains, so most people just get a tour bus, and there were many occasions that day, as we trudged achingly uphill, that we regretted not doing the same... But we kept going, slowly but surely, and finally made it up to Tianxiang. We were very proud of ourselves. Although it was only 20km in terms of distance, it was almost a half a kilometre climb from the base, and cycling uphill is never fun... 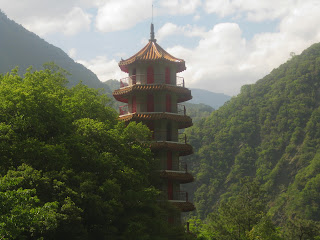 There were a few nice Buddha statues and a lovely tower up in Tianxiang, so it was a perfect place to stop and relax. We were originally planning on continuing further up into the gorge to the Baiyang waterfall, but it was starting to get late at that stage, and, much like our mode of transport, we were two tyred! Hioooo!

As I said the climb up was tough, but the thing that got me through it was the thought that - the further up we go, the more fun it'll be to cycle back. And boy was it! There's nothing worse than cycling uphill, and nothing better than cycling back down! Especially when you're going downhill for close to 20km!! We could really appreciate the scenery more on the way back too, as we followed the river down through the gorge. It was (at the risk of making a blatantly obvious pun) absolutely gorge-ous! 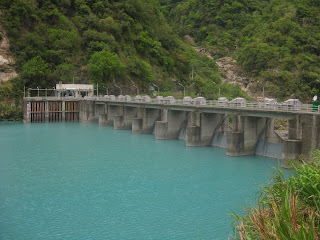 And just look at the colour of the water!

We also had to take our customary jumping shot. I set up the tripod on the bike saddle, set the timer and just as it was about to flash, a bus load of elderly Taiwanese tourists passed by in front of us. Our expressions are a mix of jumping for joy and pure embarrassment. 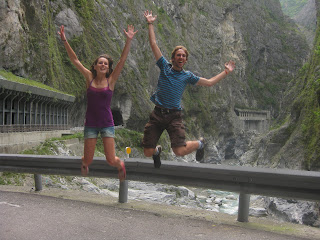 And that was our day in Taroko. It was tough and tiring, but an extremely enjoyable day out. We returned the bikes and got the train back to Hualien. The only thing was though, as Lisa had collected us and dropped us to the station, we actually had no idea how to get to the hostel! We first tried to get a taxi, but as I said before, nobody had much English, so that didn't work. Actually, listen to this! When we got into the taxi, the driver was on the phone, so she just started driving, even though we didn't tell her where we wanted to go. About 30 seconds later she finished her conversation, and finally asked us where we were going. We told her, she didn't understand, so we got out. Yet she still wanted us to pay her! She wanted money for driving around in circles while talking on the phone!

We finally had to go into a tourist office and ask them to ring Lisa to come and get us. It felt like we were ringing our mom to collect us cause we missed the last bus home... As I said though, she couldn't have been more helpful. We got pizza for dinner that night, but were too tired after our day of cycling to do much else.

The next day we got up bright and early as we were planning on spending another day in Hualien. We quickly realised though, that there actually wasn't anything to do here... Like the other cities we passed through in Taiwan, it was quite dull and shabby, so we decided to just head back to Taipei early. It actually worked out quite well in the end as there were a few things we wanted to do in Taipei, and this gave us more time to do them! So, once again, Lisa dropped us off at the station and even helped us to buy our tickets, as we said goodbye to Hualien.

And back we were in Taipei, finally with enough time to actually see the place! Our flight home was the next evening, so we had just over 24 hours to spend on the city. First up was Longshan Temple, which was really nice and very different to most temples we had seen on our travels, in that, it was mostly filled with people praying, rather than hoards of tourists... 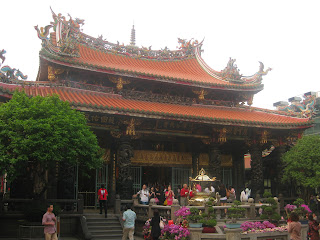 We also saw a rat swimming around in the fountain outside, which was mildly entertaining.

Our next stop, and our last of the day was the Chiang Kai-Shek Memorial Hall, which is probably the nicest thing in Taipei. We were there too as the sun was setting so it was nice that we got to see the place in daylight, and then all lit up at night. 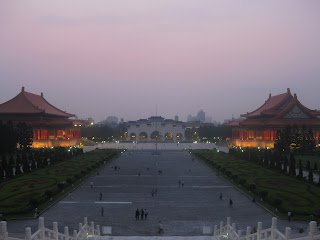 The two buildings on the left and right are the national theatre and the national concert hall. I'm not sure which is which...

And then there's the memorial hall itself, which overlooks the square. 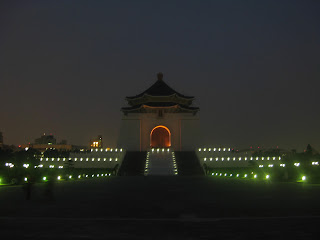 Taipei is quite a crowded city, so it was really nice to have this big open space right in the middle of it, especially with such beautiful buildings all around.

On our way back to the hostel, we saw the most amazing violinist in the subway station, video here:

We stopped and listened to him for a few minutes, and even gave him some money. He didn't even acknowledge me though when I went up to drop it in his case, which I found pretty rude. We later realised he was blind... which kinda excuses the lack of acknowledgement, and also makes his violin skills all the more impressive.

The next day, and our last in Taiwan, we headed to the Beitou Hot Springs, which were only a few subway stops from Taipei city centre. They really have outdoor hot springs all over here! They were really cheap too and surprisingly busy seeing as we arrived just as it opened, but like it was in Wulai, we were the only people there under 70... I don't know what it is over here with old people and hot springs! They were very nice to us though, one old man even went out of his way to give me a demonstration on how to wash myself... that's a pleasant memory... Unsurprisingly, we don't have photos from the hot springs, but here's one from the metro station! 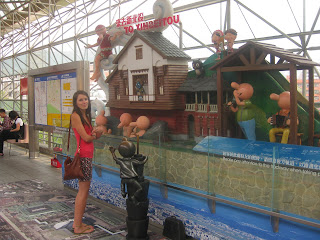 Each station actually had nice art and statues, in fact the metro system here was fantastic! Better even than Hong Kong's! The best bit was that they had a countdown timer in the lobby of each station telling you when the next train from each platform was leaving. They don't have that here in HK and it would be so handy... I know there's a new train every couple of minutes, but it would be nice to know exactly when it was coming in advance so you could walk a bit faster if necessary. I'm just saying...

Our last stop of the day was the world's second tallest building (formerly the tallest, damn you Dubai!), Taipei 101 which, cleverly enough, is 101 storeys high! Compare that to the Elysian, the tallest building in Ireland, which is 17 storeys. (In fact, I just realised that our apartment block in Hong Kong is taller than the Elysian... that's kinda sad...) 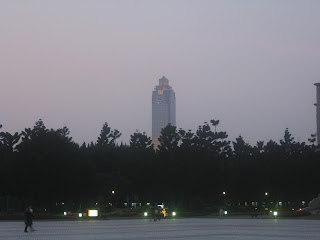 Taipei 101 is kinda hard to miss as it pretty much dominates the skyline. It really looks out of place too in the city, as nothing else even comes close! Hong Kong has the 4th tallest building in the world, but it doesn't exactly stand out cause all of the buildings are huge! We went up to the viewing platform, (on the world's fastest elevator may I add, they're really doing everything they can to get into the record books) but because the rest of the city is so flat, there really wasn't much to see... Yes, you could see for miles and miles, but it was just miles and miles of, well, nothing. It's definitely more impressive from the outside. And on that high point (baddum tish!), our time in Taiwan came to an end. We only had 8 days here, but we certainly got an awful lot done, and it's definitely a country I'd recommend seeing. Very different to most other places we've been.

And so, that's it! We're off to Indonesia in a few days, so I'll probably have the next blog up... next year! Peace out!
Posted by Mark O'Leary at 6:41 AM