Here we are, our final destination. Six incredible weeks of travelling finally reaching its climax, so it would only be fitting to save the best for last, right? And then there was Penang...
Not that it was the worst, it was just, well... nothing! Even now, I'm struggling to remember what we actually did there! And flicking through the pictures isn't really helping much. For most of our other destinations, it was a matter of, "aww, we're not going to be able to fit in all of these great photos...", but here it's more like, "aww... we've no great photos!". I'll try to keep this entry as quick and painless as possible, but if you've got something better to do, don't waste your time here. We really did nothing!

So anyway, we flew into Penang from Singapore, via KL, on the 16th of December (that's how far behind I am in the blog!). When we arrived at the hostel it was quite late, so we just dumped our stuff and found something to eat nearby. We had spent the day travelling and also each had interviews the next morning for jobs in Hong Kong, so after dinner we just ended up having an early night.

We woke up bright and early the next morning and made our way to a local internet cafe for our interviews with Dramatic English, a teaching company in HK. It was the first time for both of us, having an interview over the phone, a very strange experience, but a successful one, seeing as we are both currently working for them!

After the interviews, we took a wander up to Komtar Shopping Centre for lunch, and I wish I could remember the name of the restaurant we actually chose, as it was the single worst place I've ever eaten in. Everything was wrong with it, the food, the drink, the service, the staff, it was rubbish! (I actually do have a picture of the food, but I don't want to pollute my blog with that pile of crap!

That evening we ended up going back to Komtar again to go to the cinema (The Social Network, quite good we thought...) We had to leave the hostel anyway as it was being sprayed for dengue fever, whatever that is...? As we were walking back to the hostel though afterwards, we saw a massive queue going round the block. Naturally we were intrigued as to what they were queuing for. It turns out it some outdoor food stall, or hawker stall as they call them. We figured it must be pretty good if this many people are lining up, so we decided to go there for dinner the following night. 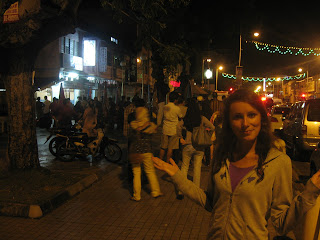 And we have a picture!!!

We strolled back to the hostel and as we got to our room, we were witness to a horrific murder!
The victim: Music. The culprit: The karaoke club next door. It was horrendous! We had to lie in bed while being aurally assaulted by disgraceful, Malaysian renditions of Last Christmas. Not how we had envisaged spending the second last night of our travels...

The next day, we grabbed some lunch in Pizza Hut (we decided to stick with something we could trust!), and then jumped in a taxi to Penang Hill. On the way, our taxi driver treated us to some really stellar advice, like when Aisling told him that she had a degree in law, he said "The thing about being a lawyer is that you have to study the law and apply it in different situations...". You heard it here first people! It's things like this we should be learning in college! I told her to make sure to be writing down these nuggets of wisdom, it's a lot to take in at once! 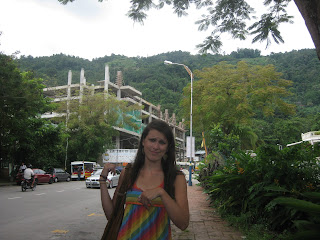 Going to Penang Hill was our big plan for the day, so after that fell through, we were at a bit of a loose end for the evening. We got a bus back into Georgetown and decided to go shopping instead, as I needed to get new shoes anyway. And indeed I did get shoes! Converse of all things! I never thought I'd see the day. And I got a nice stripy t-shirt for myself too! So, a successful shopping trip! And on the way back, we decided to get dinner in that uber-popular hawker stall. It actually turns out that it was all Muslim food. (We probably should've guessed from the big mosque in the background...) 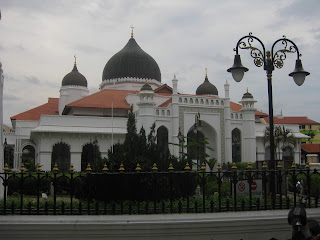 Again, the queue was massive, but again, that's surely a good sign! We were probably waiting for about half an hour, and as we neared the front of the queue, we started to panic! Neither of us knew what we wanted or what they had, and we were very conscious of the large queue now formed behind us. We didn't want to get to the front and be like, "Emm... what's that? Ok... and what's this? Ah, and what's that again....?" 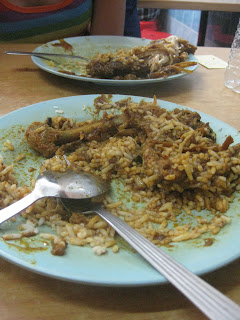 In the end, we just played it safe and asked for anything they had with beef or chicken. And in fairness it was very nice, but it was wicked spicy!
And that was pretty much it for our time in Penang! The next morning we got on a bus to KL, grabbed our stored luggage and flew off to our new home, Hong Kong. And so ends our trip around South East Asia! Or should I say, part 1 of our trip - we're planning on fitting in a few more countries over the summer and some more again before we head back to Ireland. In fact, we're actually going to Taiwan in a few days for the Easter holidays! (I'll try to update the blog a bit sooner this time...)
But that's not all folks! The next entry in the blog is a "Best of", taking into account all the places we've visited so far, and giving our top three in a few different categories. (Don't worry, it's mostly pictures, I swear!)
Posted by Mark O'Leary at 10:23 AM