So after our final night in Rikka Inn, we headed off to the airport to say goodbye to Bangkok (for good this time!). Thai taxi drivers are weird, each one is just stranger than the next. On the way to the airport, our driver started shaving while we were stuck in traffic… we were definitely ready to move on from Thailand.

Our flight to Phnom Penh was delayed by an hour, so I just took a wander around while we were waiting, trying to use up the last of our Baht. In the end, I found something called ‘peanut brittle’, it was one of the few things we could afford. I didn’t have a clue what it was and the ingredients didn’t really clear things up either; 80% peanuts, ok, 10% sugar, fair enough, 10% ivory?! No wonder elephants are becoming endangered if their tusks are being harvested to make peanut brittle! Ivory must have some amazing properties though, cause the best before date was Dec 2053! 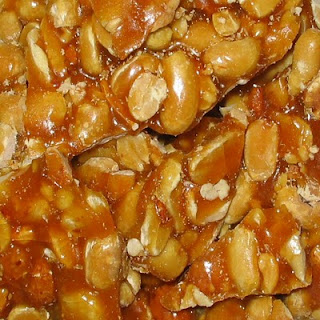 Anyway, Cambodia! We got our Visas sorted straight away as we arrived. What a change from the Myanmar Visa process! In the Myanmar Embassy in Bangkok, we had to wait around 6 hours while our documents were scrutinised to make sure we weren’t terrorists, or even worse, journalists. Here, we handed in our passports and 5 minutes later we were out the gap with passports and Visas in hand!

Aisling was extra excited when we arrived in Phnom Penh, as it was a new country for her, seeing as she’d already been to Thailand and Malaysia before. And what a way to welcome her to the country! We were greeted at arrivals by our tuk-tuk driver, Marady, holding up a sheet with her name on it! We were very excited about that. 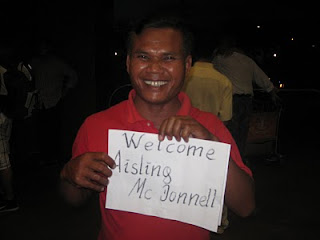 So, Marady took us (tuk-tuk us…?) to our hostel, the Noura Motel. Now I must admit, when we were making our predictions at the start of the journey, I put this down for worst accommodation. I had never stayed in a motel before, in fact I didn't really know what a motel was. The word just conjured up an image of a sleezy American rent-a-room in the middle of nowhere with a flickering neon sign out front. It turns out that it was actually lovely (and it felt extra lovely after that dump in Ko Tao!). We still don't really know what a motel is though...
We were starving when we arrived, so we said we'd grab something to eat in the first nice place we came across... it was a Pizza Company. They really have them everywhere! After dinner, we went back and settled into our room. Actually, one great thing about our room, and I've never seen them anywhere else before, they had these kinda furry pillows on the floor next to the bed that you wipe your feet on before getting into bed. Just so your feet aren't all dusty... I thought it was a great idea anyway! I wish I had taken a picture of them now...

It was late when we arrived at the motel, but it looked like we were in a nice enough area, that was until we woke up the next morning... and realised we were actually in an unreal area! With views over the Royal Palace and right by the river side too! 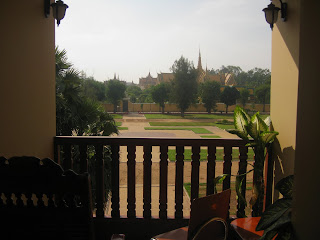 That day when we got up, our tuk-tuk driver from the night before, Marady, was waiting outside, offering to take us around for the day. He was eager, we liked that. And we had a few places we were planning to go to around the city, so said we'd hire him. We quickly grabbed some breakfast and then hit the road. I wouldn't say we had an enjoyable day, as it's probably the wrong word to use considering the places we went, but it was definitely a good day and eye-opening to say the least.

First we went to Tuol Sleng Genocide Museum, which used to be a prison during the Khmer Rouge communist regime. It was originally a high school, but when Pol Pot came to power in 1975, the classrooms were transformed into torture chambers, where up to 100 people were killed every day at the peak of the Khmer Rouge's power. 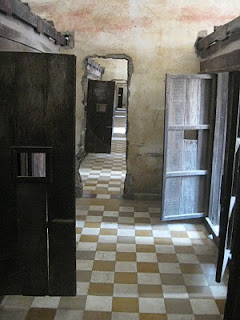 The place had such an eerie feel to it, and even though I've never been to a Nazi concentration camp, I'd imagine it's the same feeling there. A lot of the buildings have been kept in their original state, to give you an insight into the prison, though some are now occupied by the museum, filled with testimonials of the victims, artwork, clothes, skulls and hundreds upon hundreds of mug shots of each detainee as they entered the prison. 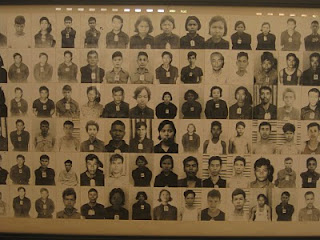 Next, we moved on to The Killing Fields of Choeung Ek, where most of the prisoners from Tuol Sleng were brought to be executed. Prisoners here were often bludgeoned to death to avoid wasting precious bullets. It wasn't just adults killed under the Khmer Rouge either, children were also slaughtered, the rationale being to stop them growing up and taking revenge for the death of their families. It was strange walking around the grounds, with mass graves on either side, some yet to be excavated. The most notable sight from the Killing Fields is the memorial stupa, which houses the skulls and ragged clothes of over 8,000 victims. It's a very pretty monument, although considering its surroundings, it's hard to stop and admire its beauty. 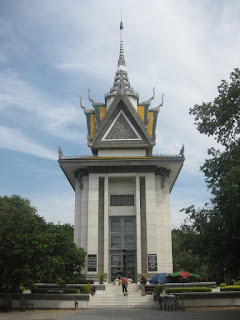 Pol Pot died in 1998 while under house arrest, and only now are the trials for the remaining Khmer Rouge members being held. It's ridiculous how long the victims have had to wait for justice and it is now very likely that a lot of the culprits will have died before the trials are even completed.
On the way back we stopped off at the rather disappointing Wat Phnom, and had a quick wander through the open air Central Market. It was hard to be in high spirits after the day we had, but we were perked up again that night with the news of Aisling's Blackhall results. She nailed them of course.
The next day, we went to the National Museum, which luckily enough happened to be right around the corner from us. It was filled with loads of ancient stone carvings and Buddha statues, which were nice, but it was kind of a case of 'once you've seen one, you've seen them all...'. The building itself though was unreal, in particular the central courtyard, and I'd even say it was much more interesting than the actual contents. It was absolutely Buddha-ful! 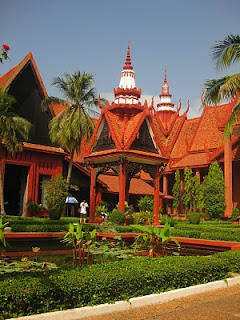 After the museum, we headed over to the Royal Palace, which also happened to be right around the corner from us! We were really in a great spot! We had a good look around the Palace, The Silver Pagoda and the surrounding buildings. It was all very pretty. The Silver Pagoda was very impressive actually. It's floored with, as the name suggests, 5,000 silver tiles, and it also houses a life-size gold Buddha decorated with 9,584 diamonds... No wonder Cambodia is still a developing country if they're spending their money on silver floors and solid gold, jewel encrusted Buddhas! 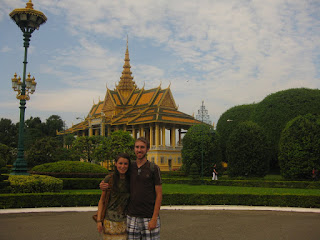 As I said, the Palace and Pagoda were really lovely, but the highlight for us was definitely in a tiny little hut, where we were allowed to try on traditional clothes and a man taught us how to play old Khmer instruments. It was so much fun! It's all well and good walking around looking at pretty buildings and statues, but actually getting to do things is a lot more enjoyable! 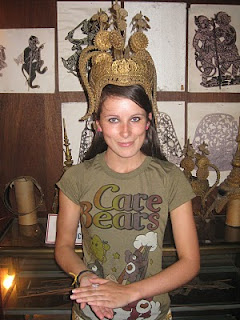 You'd almost mistake her for a Khmer princess, if it wasn't for the Care Bears t-shirt...

Here's a video of Ash playing some sort of xylophone too!

After the palace, we took a walk by the river, which was decorated along its banks with hundreds of flags. The thing is though, they didn't have every flag... I don't know if they were planning on having the flags of the world and just ran out, or what? And they had Italy twice too...

We rounded off our final night in Phnom Penh with a sunset cruise along the Mekong River, to celebrate Aisling's Blackhall results, and it really was a perfect way to end our stay. (When I was thinking back over our journey, Phnom Penh didn't really stand out for me, but writing this made me realise that it actually wasn't a bad city...). 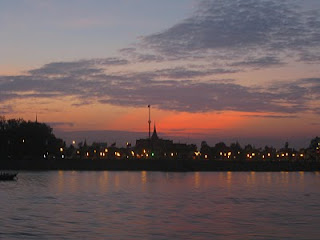 The following morning, we waved goodbye to Phnom Penh and our motel, and hopped on a bus to our next stop, Kampot!