The next morning we jumped on the return ferry, sad to be leaving Ko Phi Phi behind... (and even sadder to be travelling back to Phuket! Sorry...) It was a horrible ferry crossing too. When the crew started handing out sick bags before we even left, we knew it was going to be bad. It was funny, myself and Ash didn't know what they were handing out at first, but it finally clicked halfway through the journey when we saw people hunched over bags of yellow liquid... We arrived finally in Phuket and headed straight for the airport. After a straight-forward flight to Bangkok, we jumped on a bus to the city centre. Ash had been here before and didn't really like the place, but on that drive from the airport, I got a really good vibe from the city and was certain that I was really going to love it here! 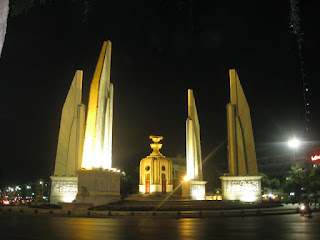 We got off near enough to our hostel on the Khaosan Road, the Mecca for backpackers in Thailand. It was mental! We actually got very used to it in the end but at first, it was a real attack on the senses. It's a pretty small stretch of road, but it takes you about half an hour to walk down it cause there are just so many people! 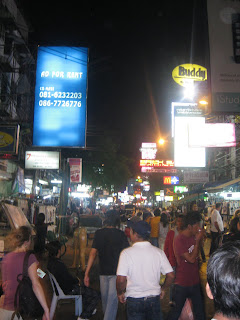 We got to our hostel eventually, thanks to two different people who went out of their way to give us directions. We obviously looked lost. (or else they knew about our friendliest people competition and were trying to make an early claim for Bangkok...) Our hostel, or rather hotel - Rikka Inn, was beautiful too! We dumped our bags and took a stroll up to our rooftop pool, that's right, rooftop pool!!! It's got a great view over the city and there were even fireworks! They obviously knew we were coming. This only cemented my view that I was going to love the place! It was just a shame we'd only be spending two days here...
We had a walk around and saw a restaurant showing the Villa-United match, so we ate there! (I think you can see a trend forming...) Villa, despite being 2-0 up, were pegged back to draw 2-2. Still, it was an exciting game. The food was rubbish though... We went back to the hotel and had a quiet night seeing as we had to get up early to go to the Myanmar Embassy in the morning (we were flying there in a couple of days, so had to sort out Visas).
The next morning we got up and had brekkie. Halfway through Ash realised today was Sunday, and the Embassy would probably be closed... she was right (we really have no concept of days anymore). That was a terrible realisation, seeing as it takes a day to get a Visa, and we were planning on flying out the next morning... So, that was our Air Asia flight down the drain... I guess my longing for another day in Bangkok was blowing up in my face...
After breakfast we set about trying to fix another one of our problems, Aisling's laptop. We looked up computer repair places in Bangkok and found one that was recommended in Pantip Plaza, so we set off for there! We found the place and went up to the counter to show the girl our problem. It wouldn't work for the past three days despite numerous efforts, turning it on and off etc. but as soon as we take it out to show her, guess what, it starts working again perfectly... Typical! Very embarrassed, we left the shop, though we were glad we had our computer back.
A side story about that journey: In Thailand, you don't have to look for a taxi or tuk-tuk, every street you walk down you'll get about a hundred offers, no matter what. If you want a taxi, you just have to say yes and someone will usher you into their car. When we were going to Pantip Plaza though, (one of the few times we actually did want a taxi!) we saw this guy parked on the side of the road, so we went over and told him where we wanted to go (it was at the other side of town so a nice fare for him). He paused for a second and said "Nah, too much traffic". Being rejected by a taxi driver in Bangkok... definitely a low point in our lives.
After a morning spent doing jobs, we finally had time to do touristy stuff! We went to Chatuchak Market for a wander (it's basically just an infinite maze of open-air market stalls, selling all kinds of everything). After finally finding our way out, we went to see some temples. (After Ash had a quick swing in a nearby playground of course!) 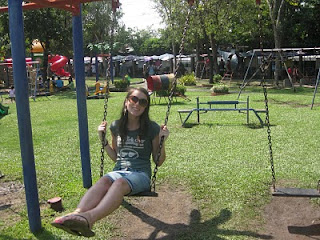 First on the list was Wat Pho, to see the giant reclining Buddha (it was huge in fairness). The grounds of the temple were really nice too actually, so we took a walk around. Oh, there was also this local tradition of getting a basket of coins and dropping one into every pot along the main hall of the temple. It wasn't anything special, but it was one of the tasks in The Amazing Race, so we had to do it! 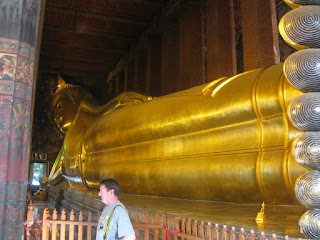 Next, we headed across the river to Wat Arun, The Temple of Dawn. It was very different to the other temples we'd seen, which made it all the more memorable. It's a tall, intricately carved structure that you can climb right up to the top of, well, near enough. Oh, also while we were hanging out by Wat Arun, we saw a group of Buddhist monks taking pictures of each other with a digital camera! It was very strange... 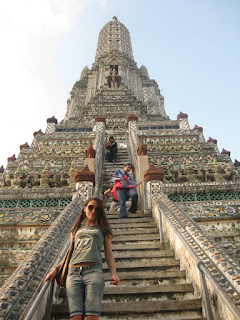 To round off our busy touristy day, we went to Ratchadamneon Stadium to watch some Thai Boxing! There were 7 fights on the card, but the first few were just youngsters, so it didn't really kick off (pardon the pun) til the end. Admittedly, for the first few fights, our attention was drawn by a little kid in an orange t-shirt who was causing havoc in the audience. He was spitting water at his Dad, kicking plastic bottles into the crowd and was just generally up to no good. It was actually hilarious though, cause he kept popping up in different parts of the stadium! Everyone seemed to know him too and nobody had a problem. He was a lunatic! 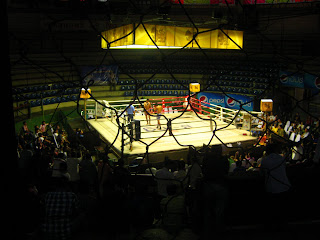 Afterwards we got food and headed back to the hotel, seeing as we actually had to get up early to go to the Myanmar Embassy this time. For real! The next morning we arrived at the Embassy at half 8 (it didn't open til 9 but we wanted to be top of the queue for our Visas). We were in fact 8th in line. We wanted to get our Visa as soon as possible cause there was a half 4 flight to Yangon that we were still hopeful of getting. We filled out our forms as fast as we could (despite Ash spilling a bottle of glue all over hers) and handed them in at the counter, only to be told that the earliest we'd have our Visas would be half 3. We couldn't risk it, seeing as the airport was about 45 mins away, so we resigned ourselves to changing our plans and spending another night in Bangkok... 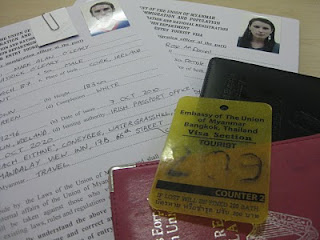 We had to head to the airport anyway after the Embassy to book new flights to Yangon for the next morning. While we were there, we said we'd take out some money for Myanmar. I was able to take out a small bit from the ATMs but Ash wasn't able to take out any... We presumed there was some sort of daily withdrawal limit, (seeing as we had earlier taken out some to pay for the flights) so we said we'd leave it til the morning. We also reserved online a new Air Mandalay flight from Yangon to Bagan for the next day (we weren't staying in Yangon at all, but it's the only way into the country).
We got some lunch, checked back into Rikka Inn for the night and then grabbed a taxi back to the Embassy. When we told our driver that we were going to Myanmar, he said "Oh you don't want to go there, you get bombed!" and during the journey he kept saying "Myanmar, Myanmar, *gun noises*", while making gun gestures at us! He was an absolute nutter! I wont go into detail now cause I'd be here all day. (Some choice moments though: Him telling us how he doesn't like Africans and yelling "Africa!" out loud every time we passed a black person. Him talking to us like we were from Holland, even though we told him on numerous occasions we were Irish. Him asking us what countries were in Europe and his surprise that America wasn't) We had to get a picture with him in the end. Nutter! 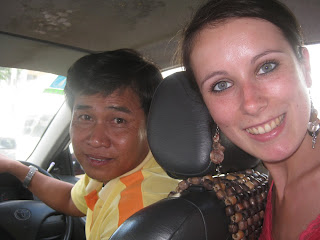 We got our Visas anyway, thankfully, and got another taxi to Wat Benchamabophit, The Marble Temple. (A nice security guard helped us get a taxi cause we were in a quiet part of town and he made the driver turn on his meter too, getting us a journey at about half the price! Another point for Bangkok in the "nice people" category! There have been a lot more too that I've failed to mention. Serious contenders here!) The Marble Temple was awesome too! Our favourite so far I'd say. It wasn't as packed with tourists like the other temples, so we pretty much had the place to ourselves! 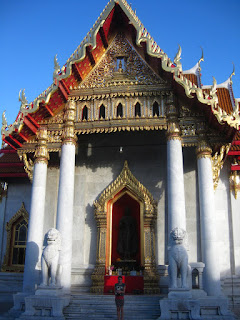 We went back to the hotel afterwards and had a late swim in our rooftop pool, (rooftop pool!) before getting dinner on our, hopefully, last night in Bangkok.
As I said earlier, we had trouble taking money out of the ATMs the day before, so when we arrived at the airport the next morning, we hoped to God that problem had fixed itself... it hadn't. Ash still couldn't take out anything and I could only take out 5,000 Baht (about €125). Absolute disaster! Now I know what you're thinking, what's the problem, just take out money when you get there! Well, to quote the Lonely Planet's section on ATMs in Myanmar, "Dream on..."
So, here we were, on a plane to Myanmar, where we were staying for the next week and a half, with less than half the money we needed for flights, accommodation, food etc. and no way of getting more money til we left... Needless to say, neither of us were too excited when we arrived in Yangon...
Posted by Mark O'Leary at 12:59 AM