Almost two full years since my last blog entry, I think it's about time I picked up the story once again. In those two years, we've done a fair bit of travelling around Europe, and I may go back and tell those tales some time, but for now, it's a new continent, and a new adventure with five weeks in South America! 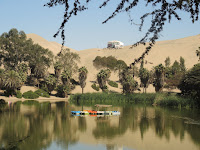 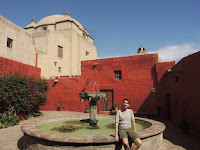 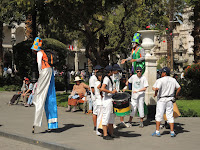 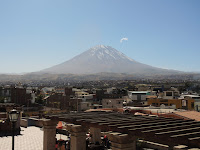 This would be our longest travel stint since coming back from Asia, but it was almost over before it even began... Our flight to Lima connected through London and Miami, with a couple of hours in each, but it never even occurred to us that you would need a Visa to get a connecting flight. It turns out, you do! We found this out after we were refused check-in at Dublin airport. The girl at the desk told us we would need an American Visa before she could even check us in, and that they can often take up to three days to process! Three days?! Suddenly Lima seemed a lot further than half the world away...

She gave us the website and we went off on a mad dash through the airport to find a computer. We found one and went through the process as quickly as my fingers could type (not very fast). It was then a rush back to the desk to see if our pending application was enough to check in, hoping that it would be sorted by the time we reached Miami. It wasn't. In fairness though, she did ring up whoever deals with these things and after an anxious wait as the minutes ticked by, they processed it on the spot. Success! It was now just a case of bustling through the airport to catch our flight! Phew! Not the start we had expected, but it's good to get the blood pumping. Off to Peru, my 50th country! 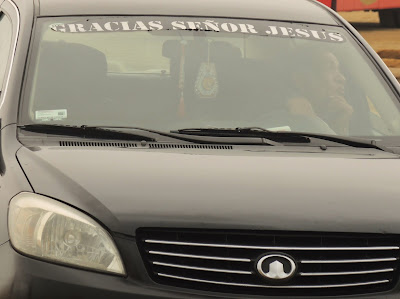 What goes up must come down, and the relief of making it to Lima soon changed to horror when we realised one of our party didn't make it. Frankie was packed in my checked luggage, but when I opened my bag upon arrival, he was gone! Most likely, he was taken going through US customs and torn apart in search of drugs or bombs or whatever else you can hide inside a plush cow. It truly was a sad day. After nine years together, our journey was over. In his short life, Frankie had seen 43 countries across Europe and Asia, climbed to Everest Base Camp, travelled across Mongolia with Nomadic tribes, spent 5 days in North Korea, but didn't last 3 hours in America... 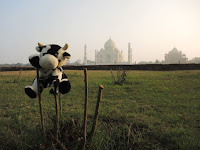 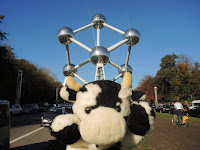 Bye bye, Frankie. You were too beautiful for this world...

In Lima, we just had the one day as we hadn't heard great things, and we were flying out from here at the end of our holiday anyway, so would have another day in town then. We were staying in what was meant to be the nicest area of the city, Miraflores, and in fairness, I think it would have been lovely if it wasn't such a dull, grey day. We spent the afternoon walking along the seafront, getting adjusted to our new surroundings and preparing for the greater journey ahead. 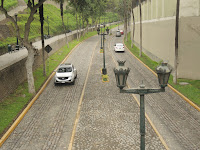 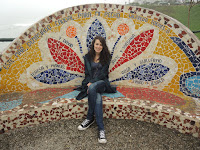 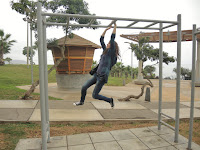 We had more of the same weatherwise the next morning as we left Lima and bussed through Paracas, with more nice scenery ruined by grey skies. We were dreading five weeks of this, but our next destination would surely bring a change of fortunes. Huacachina is a natural oasis in the middle of the desert, and if there’s one thing I know about deserts – they’re sunny! (Though we once got caught in a downpour in the Gobi…). We had better luck this time around, as we were greeted in Huacachina with nothing but blue skies! 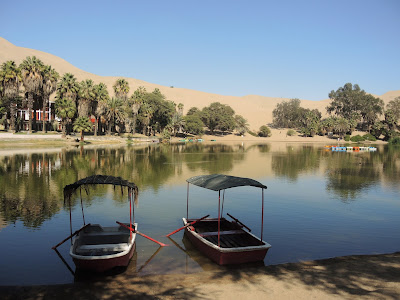 We only had a day and a half in town (I say town, but really it was just a tiny village around a central lake), but we loved our time in Huacachina - one of the most unique places we've ever been. We started off with a dunebuggy and sandboarding tour which took us into the desert, and up and down the surrounding dunes. 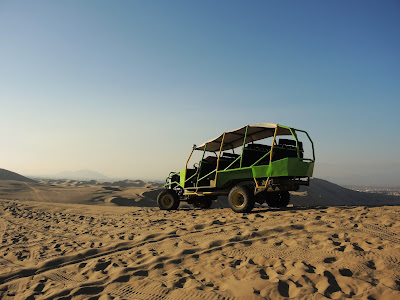 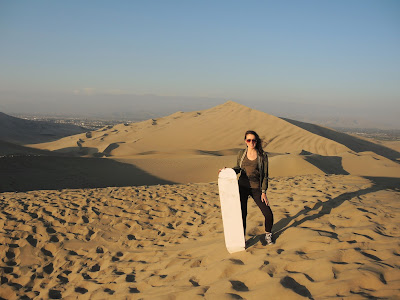 The sandboarding was surprisingly difficult and attempts to remain upstanding were quickly thwarted by gravity. The final dune (which was enormous!) was far too high and steep to tackle upright, but in hindsight, I shouldn't have tackled it at all. Going down on my front, I made it 90% of the way down before wiping out in a major way, and ending up with sand burns and a couple of bruised ribs for my troubles. 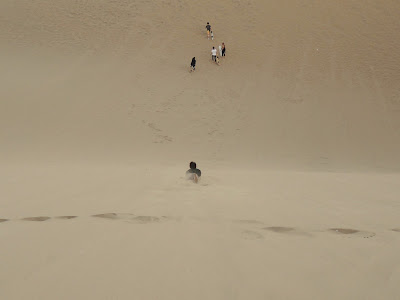 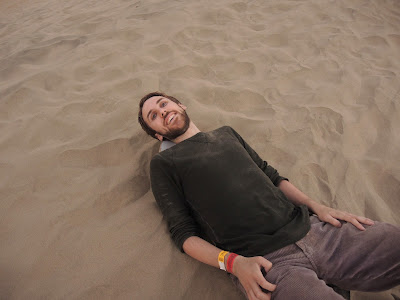 The next day was maybe less dangerous, but a lot more arduous as we climbed the dunes surrounding the village for a better view. As we had found previously in Mongolia, climbing dunes is seriously draining, and every step you take is like treading through honey. It's even less fun in the midday desert heat. But we made it, and it was worth the tired legs. 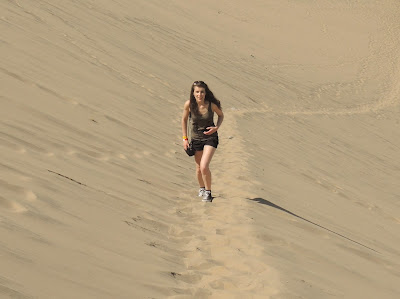 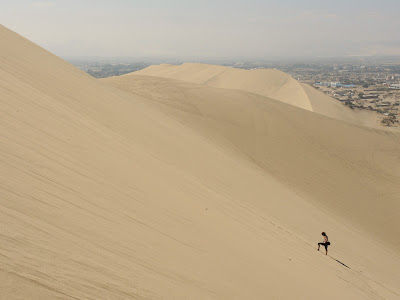 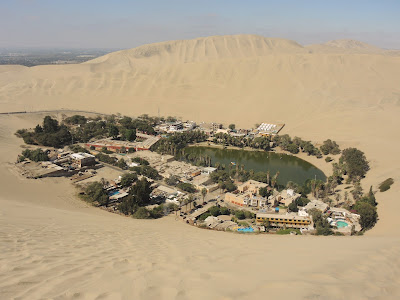 I wonder how Peruvian mothers walk their kids across this terrain... They must use dune buggies!

After Huacachina, we made a brief stop off at the Nazca lines; an intricate set of figures and symbols carved into the terrain by an ancient civilisation around 2,000 years ago. Not much is known about their purpose or the people who made them, so there isn't really a whole lot I can add...! To get a proper view, you would need to take a flight over the surrounding area, but we got a quick glimpse from a little viewing tower. 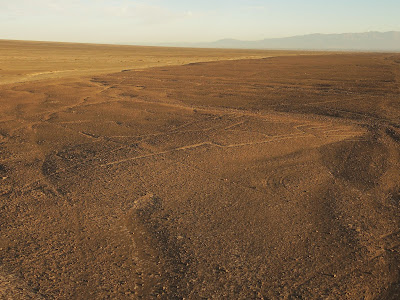 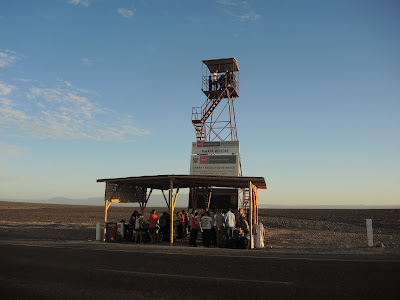 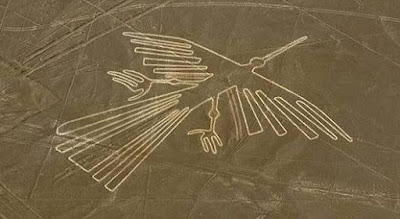 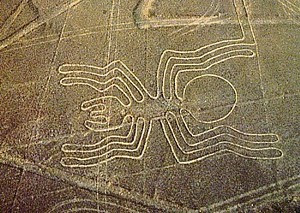 Obviously not my pictures.

Our last stop for this leg of the trip was Arequipa - Peru's second city, or "The Cork of Peru" as it's rarely called. We had two days here and they were nice relaxing ones. The weather was great, the town's historic centre is small and nice to walk around, and the whole city lies under the watchful gaze of El Misti; Arequipa's own volcano. 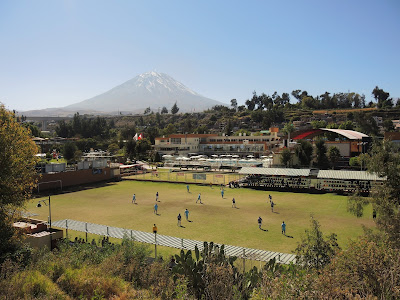 As an aside, this is probably something I've spoken about before in my blogs, but it happened to us on the bus here and on our flights to Lima, so it's fresh in my mind. It's my single biggest annoyance when travelling and something that would definitely be on my list if I were ever on Room 101 - people who recline their seats. They're the worst people in the world. There's so little space on planes and buses as it is, without some selfish prick digging into yours so that they can have a little more for themselves. On the way to Arequipa, the guy in front pushed his seat back all the way, and of course, we're far too Irish to kick up a fuss about it so we just moved (and hoped he could sense our disgruntlement).

Later on in the journey though, while he was trying to read, the guy in front of him reclined all the way back, knocking his book over in the process. It was delicious! I think we laughed a bit too loudly at that one. Still, I hope he realised something in the process. 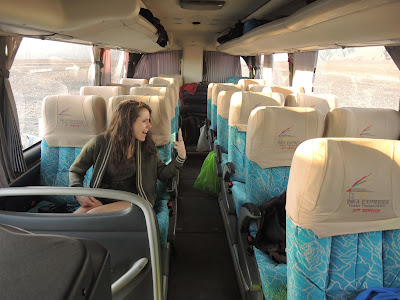 That picture was just after we were the first back on board after a pit stop. We made sure to push his chair back upright before he returned. A petty victory.

Back in Arequipa, we just generally wandered about as there aren't many major attractions to see. One thing we did do was visit the Monasterio de Santa Catalina, a large monastery in the centre of the city. It was nice and peaceful to walk around with brightly coloured walls and courtyards. 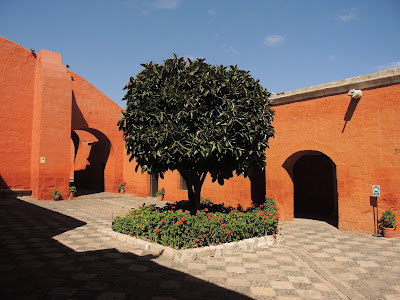 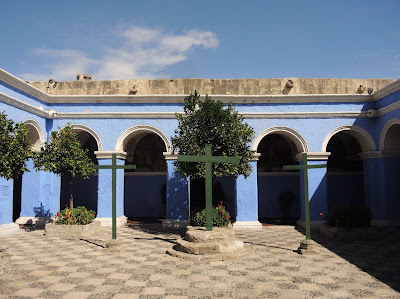 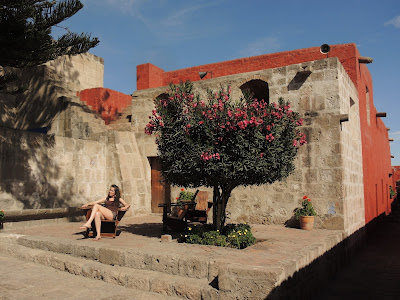 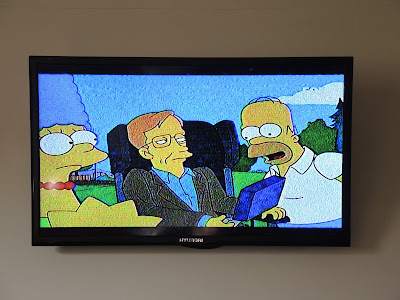 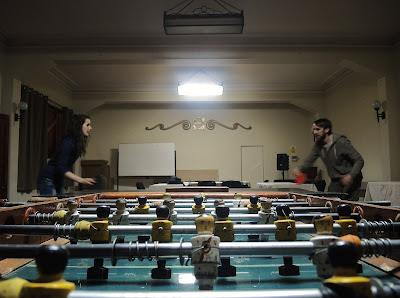 In case you wondered, the table tennis finished 2-1 to me after a fierce competition. Table tennis and air hockey are our two biggest rivalries and it's usually pretty tightly contested.

We also got to see a few of the Euro 2016 quarter finals, again all in Spanish, and the South American commentators really do live up to their stereotype, GOOOOOOOOOOOOOOOLLLLL!!! I'd say he was fit to collapse after France - Iceland.

That was all for our first stab at Peru, and so far it's been solid. We'll be back here again at the end of our trip for the main event - Machu Picchu, so there's a lot more here for our Perusal. For now, it's time to hop the border into Chile. Until then!
Posted by Mark O'Leary at 1:56 PM