The final stop is upon us! After three and a half years of travelling, there's just one more box to be checked off our list before we leap back into the loving embrace of Ireland. And I'm happy to say we finished on a pretty high note. Abu Dhabi continued on where Dubai left off, giving us another taste of the lavish lifestyle, serving up some truly world class sights, none of which cost us a penny! I'd even argue that it's nicer than Dubai and certainly had more of a structured city feel to it. They were a lot more different than I would have imagined actually. For example, the people of Dubai don't like The Flintstones, but the people of Abu Dhabi do...! (Baddum tish!)

Anyway, if you do happen to be flying through, definitely give this place a few days of your time. 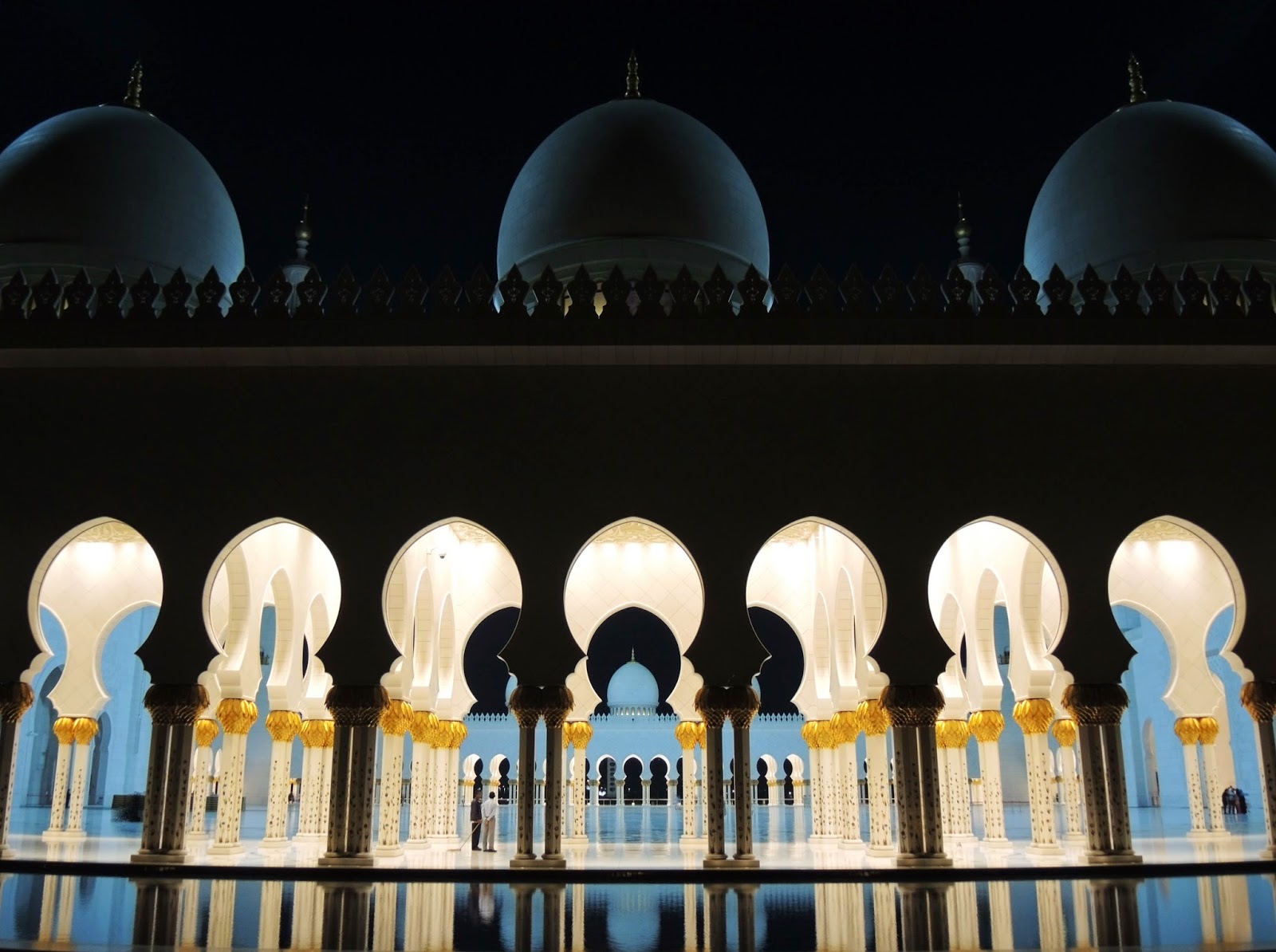 The above picture is from the Sheikh Zayed Grand Mosque and I'm just going to skip the timeline straight to there as it's probably the most incredible building we've ever seen and, quite frankly, shits all over the Taj Mahal. We were only in town for three days but made sure to visit this place twice, spending three hours there each time - it was that good!

We got to see the place, not only by day and night, but also got to take a free guided tour, learning about the building itself, as well as the history of the UAE and the Muslim faith. Our guide was very charming and if you're going to give a group of tourists the hard sell on Islam, this is definitely the place to do it! All they need to do is bring in a few high profile Muslims like Muhammad Ali, or Cat Stevens and they'd be converting people left, right and centre! 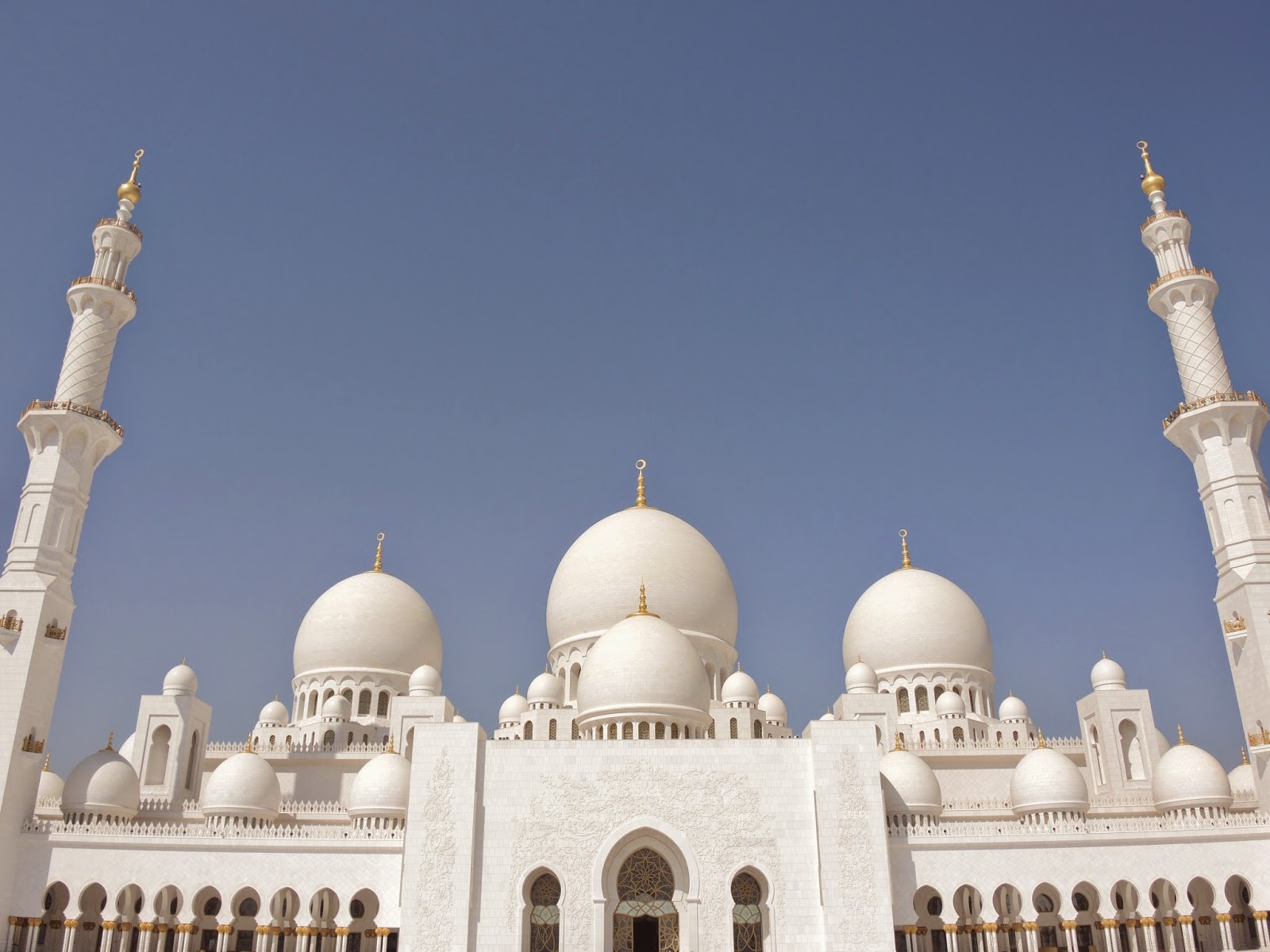 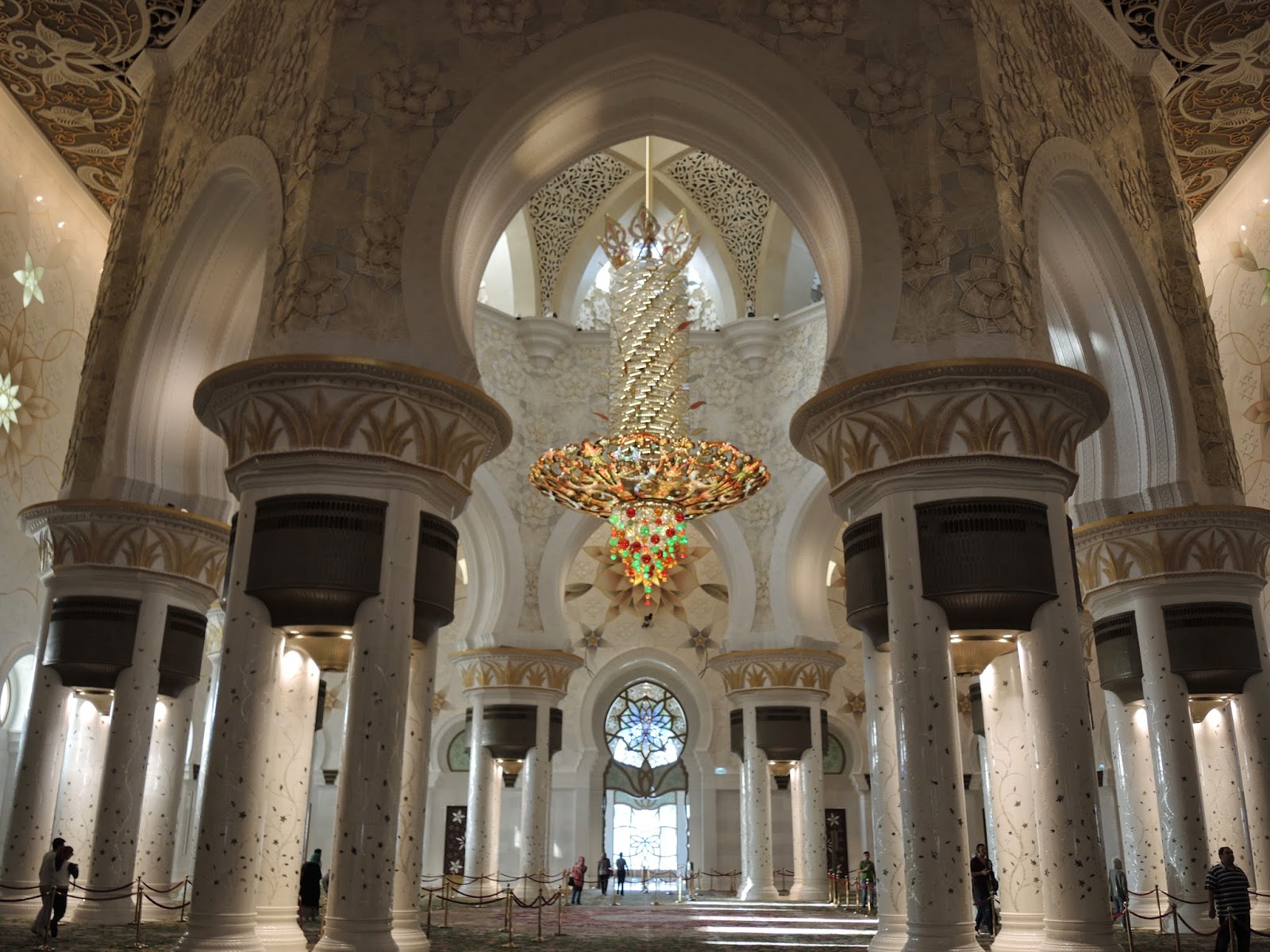 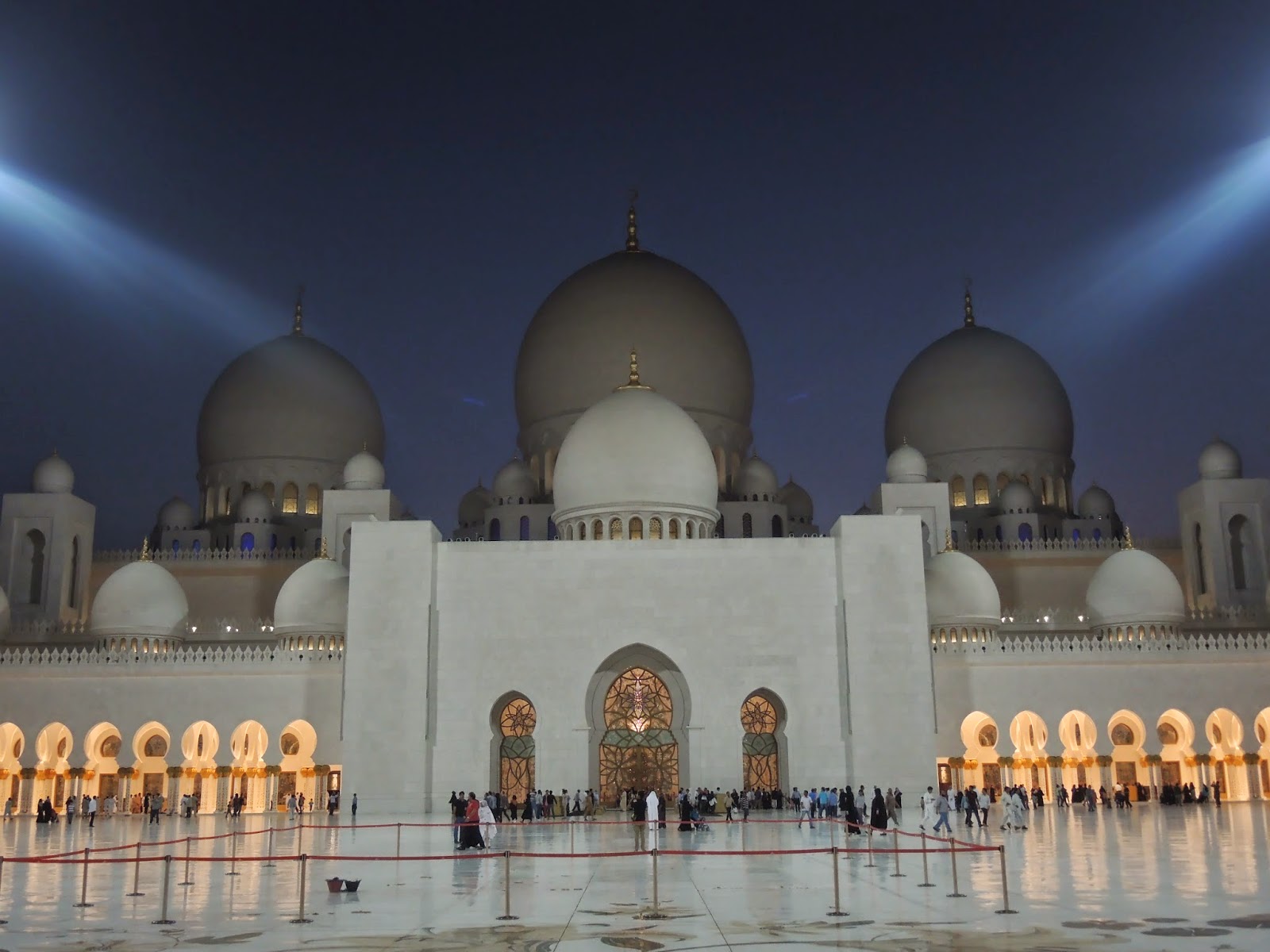 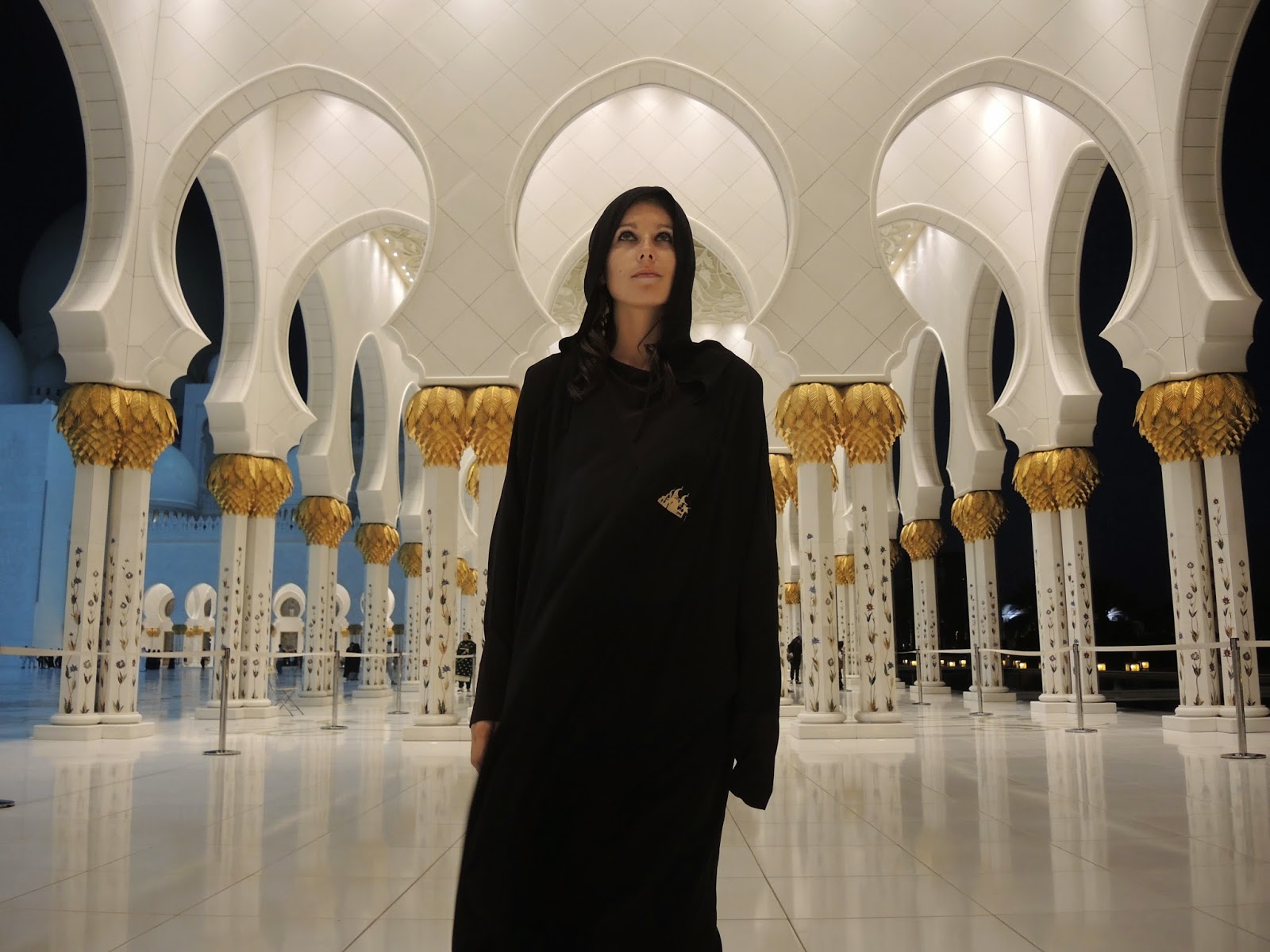 Top tip - you're meant to cover up while you're there but if you happen to show up with nothing but a t-shirt and shorts, they'll loan you some traditional garments while in the mosque. So, (and I probably shouldn't be encouraging this, but...) make sure you don't have the required clothing and get your hands on a Kandura or Abaya, just to give your pictures that authentic feel! 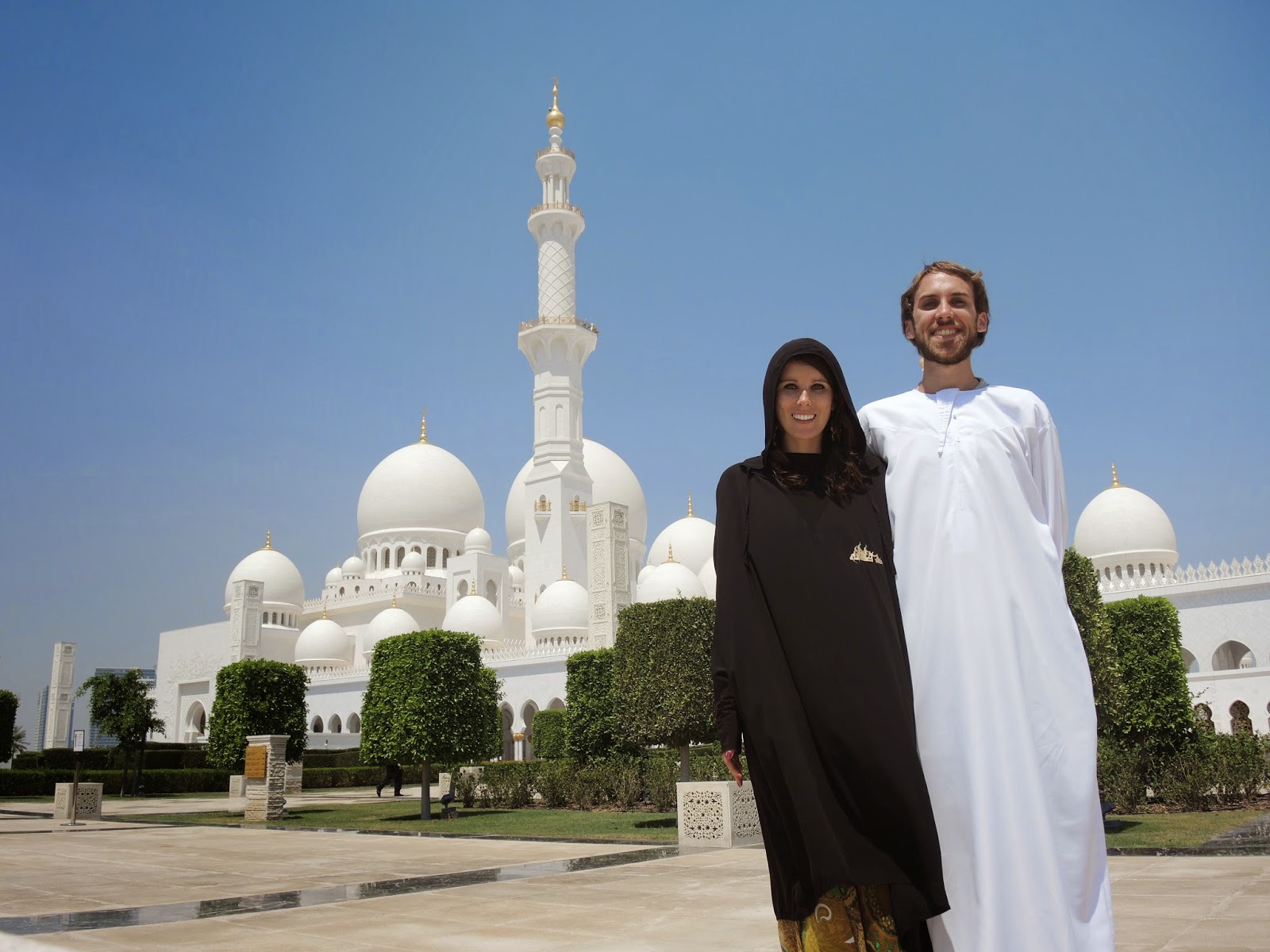 In other Abu Dhabi news, on our second day in town, we grabbed some bikes and cycled along The Corniche - a lovely waterside promenade. It's a place where you could easily spend the day with beautiful white sandy beaches, but we had only hired the bikes for an hour so we had to rush to get back in time. 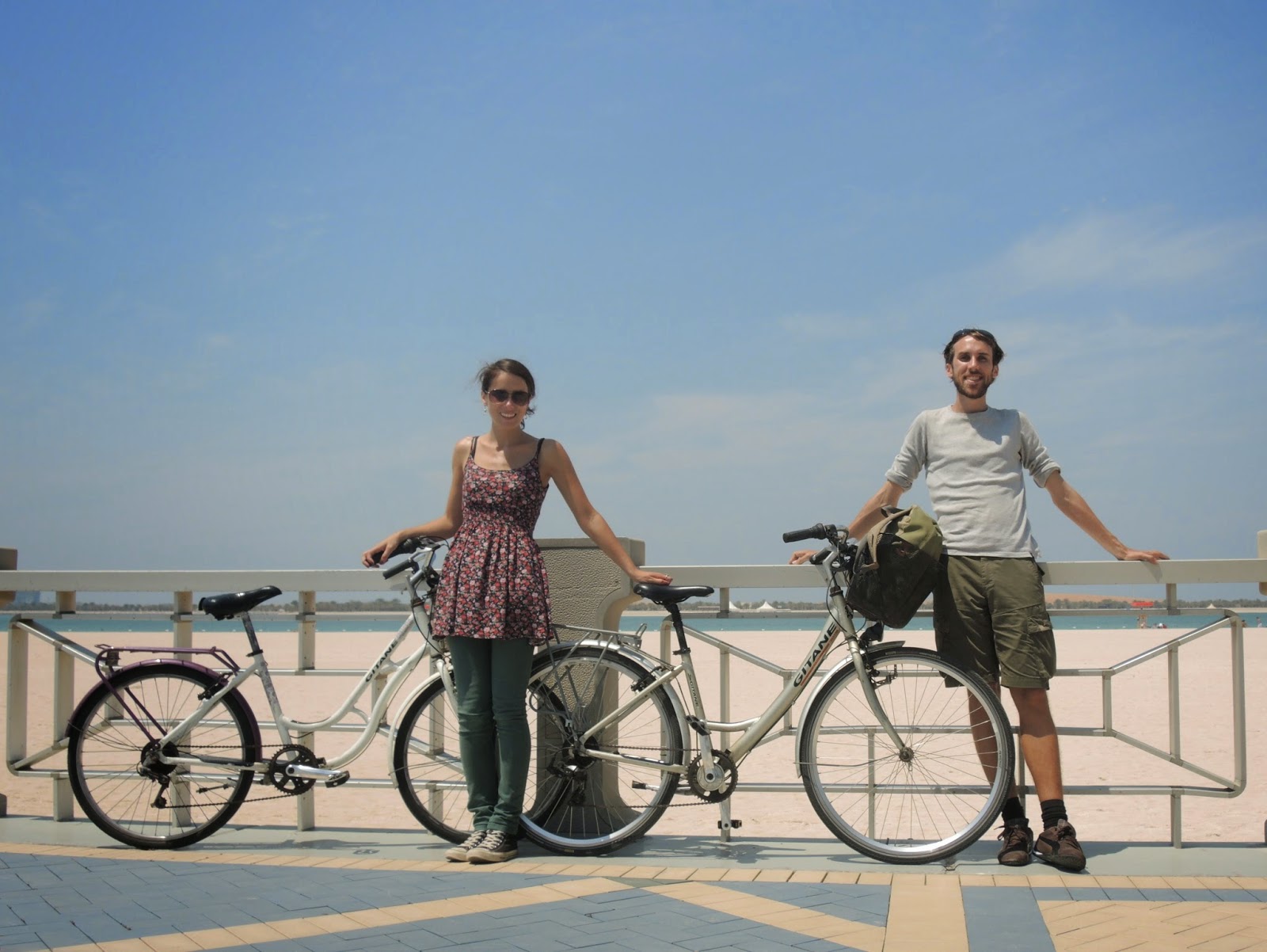 After The Corniche, it was just a short walk up to The Emirates Palace Hotel, reportedly the most expensive hotel in the world. The kind of place where they sprinkle 24 carat gold flakes on your coffee. Now surely that's the definition of having too much money - you're so rich that you literally ingest valuable metals!

Non guests are allowed to walk around the first floor and the hotel gardens, and to be honest, I thought we fit in pretty well. It's like we own the place! 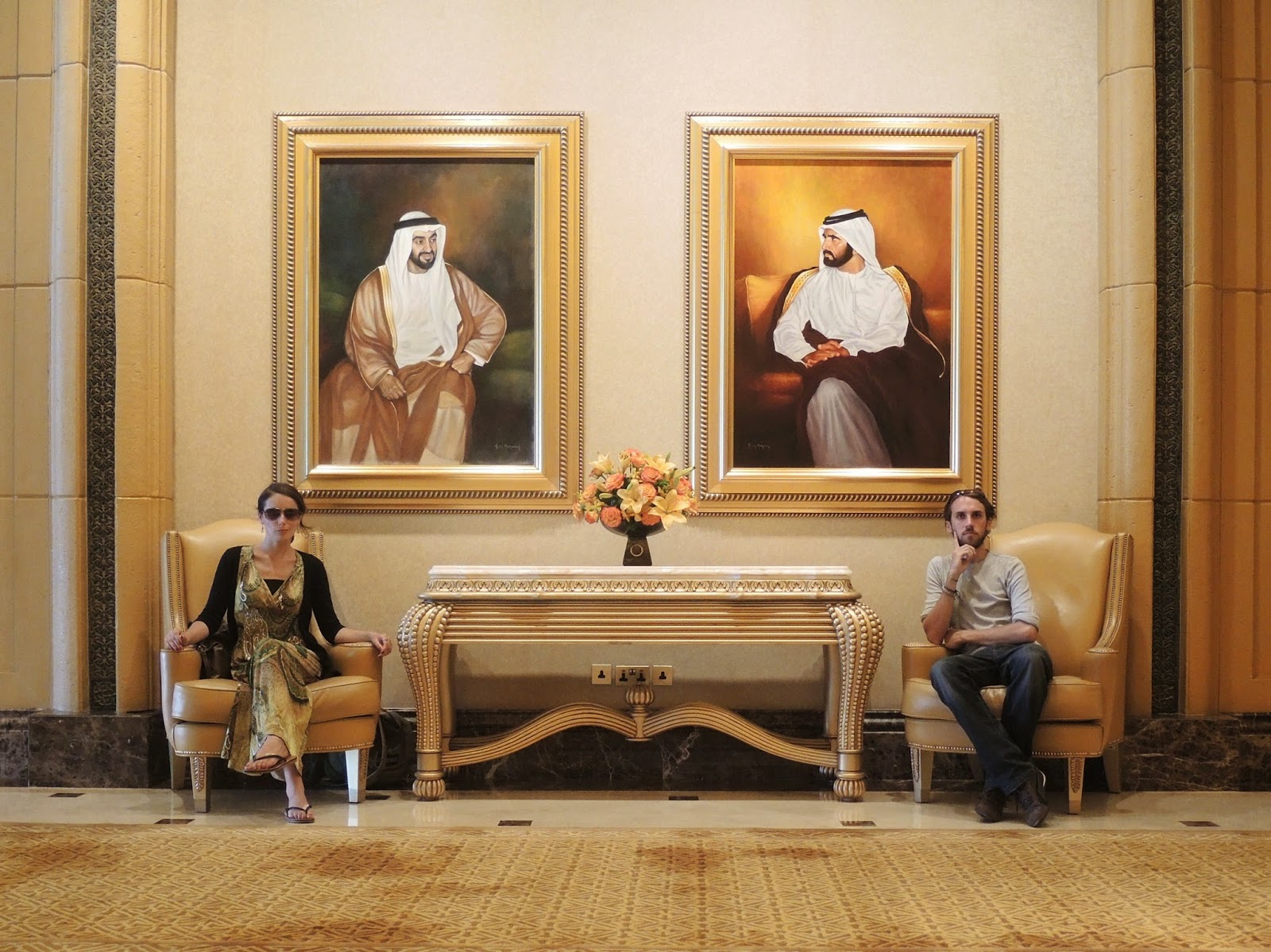 Unsurprisingly, we made our video diary back at the mosque:

There was, however, a tiny bit of drama before we boarded our final flight home. As I mentioned previously, we got away with quite a lot of excess baggage when flying with Emirates from HK to Dubai, but we weren't so lucky on the way out. This time we were 11kg over the limit, and with a charge of €30 per kg, that added up to a lot more than we were willing to pay!

We were left with little option (and even less time) to lighten our load. So, we swapped some things around, layered on the clothes, filled up our pockets, and even gave a stack of books to a (very grateful) Pakistani lady. We could hardly walk back to the counter with the amount stuff we had crammed into every orifice! We probably looked like the most conspicuous shoplifters you could imagine. But it worked! No extra charge for us! By the end of it, we deserved a Nobel Prize in Physics for the way we made 11kg worth of mass disappear into thin air!

And that was that for Abu Dhabi, and the final stop of our Am-Asian Adventure for Allah knows how long! We'll definitely be back again many, many times in the future as we've got a lot of unfinished business here. Twenty-one countries may seem like a lot for our record books, but we're actually not even half way to completing the Asian collection (There's 49 countries in total, in case you're wondering). So, watch this space, Kyrgyzstan or Azerbaijan or whoever you are, we're coming for you!
Posted by Mark O'Leary at 11:46 AM