Unexpected maybe, as it doesn't really have many 'sights' to speak of, but Hoi An has emerged as a real dark horse and firmly staked its claim for this summer's top spot! A classy riverside town with antique buildings, ambient lanterns and tranquil surroundings, and the latest place to be added to our "must return someday" list. 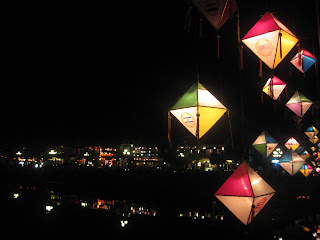 As we left the action, we were boarding our night train to Hoi An (well, technically Danang, as Hoi An doesn't have a station itself). We got two hard sleeper beds in a six berth cabin filled with locals (and I mean filled!) - a man and woman, quietly above us, and then a family of 6 crammed into the two beds below! A very cosy 16 hours for everyone involved… 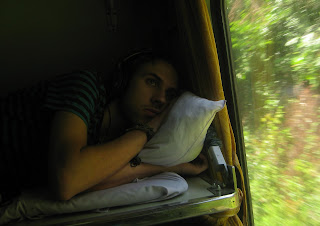 And our travels weren't over yet, as we still had to get an hour long bus from Danang to Hoi An. We had read that the bus station was nearby, but we didn't know in what direction. The taxi drivers outside obviously weren't much help either, chiming in with "the bus station is too far to walk" or "no no, it's too late, no more buses today". Each story ended with us having to get a taxi instead, funny that... We finally pieced together directions from people along the way and miraculously spotted a Hoi An bus stop at the side of the road, so we were finally good to go after travelling for the best part of a day.

But Hoi An was certainly worth the wait! And our accommodation, Phuoc An Hotel, only added to the experience - nice room, TV, balcony, swimming pool (that we actually only paddled in once), breakfast, the list goes on. We didn't want to leave! 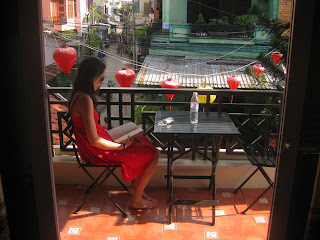 Hoi An is also the tailoring capital of South East Asia, with practically every second shop ready to measure you up for some new garments. Handily enough, our hotel had a tailor shop of its own in town (one recommended in the Lonely Planet too), and as guests we were entitled to a 20% discount, so... when in Rome! I got a suit made up and Aisling a dress, (although, I've got a feeling they might have bumped up the price after we told them we had a discount) - Tip of the day: announce you have a discount, after they give you the price. Still, a tailor made, three piece suit for €80 isn't too shabby. There were other places in town with lower prices, but I wouldn't really put much faith in a €20 suit. With most things in life, you get what you pay for. I would put up pics of us in our new purchases but they're all packed away at the moment. We even had to buy another bag to hold all of our souvenirs, mostly just lanterns... 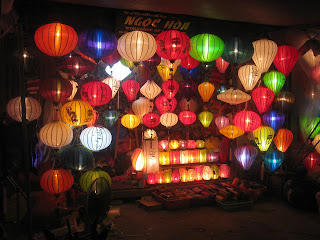 In fact, all lanterns.

Our first night in Hoi An was spent just walking around the old town, which is a UNESCO heritage site. It's an incredibly beautiful place, and because it's a protected area, there are strict laws about future development, so no building of massive office blocks or luxury apartments, no tacky shop-fronts or sleazy neon lights, and no cars or motorbikes are even allowed in the old town area. It's good to know that these streets won't lose their unique charm any time soon. 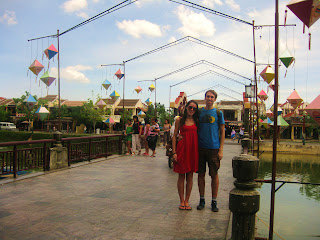 The next morning (after getting ourselves fitted for our new rigouts), we went on another Lonely Planet inspired walking tour of the town. You're meant to buy an Old Town Ticket if you want to go inside any of the temples or old houses, but nobody ever asked us, so we just kept going from place to place without one! In our defence, we did try to buy one at one stage, but there was nobody at the ticket booth, so we took it as a sign for a free day of sightseeing! I wouldn't even call it sightseeing because, as I mentioned earlier, there are no real sights here, just a few small Chinese temples or old houses or bridges. Hoi An itself is the sight. 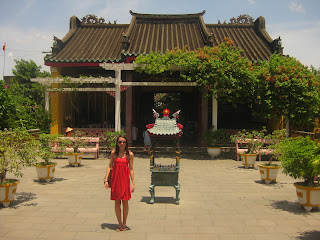 The town isn't even that big but we had to stop off a couple of times for drinks because it was so hot. And this is meant to be the rainy season! It was quite easy to be tempted though by the many riverside cafes, and we gladly accepted, enjoying the shade and watching the world go by outside. Aisling even had to whip out her Circle K umbrella (Hong Kong's finest) to act as a makeshift parasol for the day. 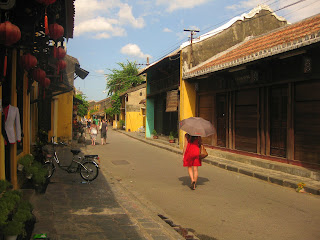 And to round off our afternoon, we went back to our hotel, ordered some food up to the room, and a couple of traditional massages too for good measure. Why not, we're on holidays!

The next morning, we took a half day tour 55km up the road to the temple ruins of My Son. We were gone for 5 hours, from 8am - 1pm, and even though only an hour and a half of that was spent actually walking around the ruins, it was still a bargain at $4 each. Unfortunately, My Son was a real disappointment and pales in comparison to many others we've seen elsewhere in Asia. (Now there's a sentence I hope I won't have to say in a different context in the future!) Seriously though, it wasn't that good. It may have been mildly interesting if this was our first time seeing something of this kind, but having previously been to places like Bagan, Ayutthaya and Angkor Wat, this wasn't even in the same league. 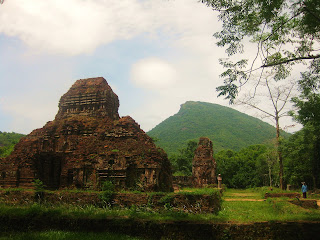 I would have said it wasn't worth the trip if it hadn't been for these two Japanese guys we met, and one of them in particular. He was your stereotypical, broken English, extremely polite, over-enthusiastic (but in a lovable way) Japanese tourist. He was a hoot! Our first interaction with him was when he asked to take a picture with us (why, I don't know...) and when we gladly obliged, we were bombarded with "Thank yuuuuuu!" and bowing, like we had just saved his life! And whenever we'd walk past him after that, he'd happily wave or give us another "Thank yuuuu".

Later on in the day, we saw that he was asking his friend for a tissue, so Aisling gave him a pack of her own. ...you've never seen someone so grateful, "All for me?!?! Whaaaa?! THANK YUUUUU!!!" He even got his friend to take a picture of Aisling giving him the pack of tissues! We, of course, had to get a picture with them too. 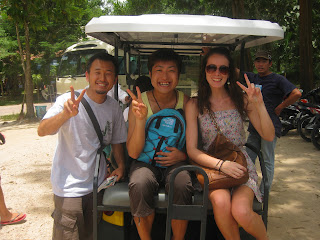 We bumped into them again later that evening when we were collecting our clothes from the tailor, and it absolutely made our night! And his! His face lit up when he saw us! We were the first people from Ireland they had ever met, so we hope we made a good impression. He certainly made a good impression on us anyway! We just hope that when we go to Japan, everyone is like him!

If you'd like to learn more about our travels in Hoi An and Ho Chi Minh City, watch this video diary:

The next morning, we got a bus to Hué, a sleeper bus in fact. (I don't know why it was a sleeper bus, seeing as it was only four hours away, and during the day...) It was a nice comfortable journey though, landing us in Hué just in time for lunch. More coming soon!
Posted by Mark O'Leary at 9:00 PM