Five months after we went to Myanmar and two days before we go off on our summer holidays, I'm finally getting around to finishing the blog. I don't know why this always happens...

So, we left Inle Lake on the afternoon of the 25th (January 25th, that is), arriving in Mandalay just before sunset. As Aisling was still recovering from her Mandalay Rum induced sickness, we just took it easy the next morning, only going to see two nearby places. First, Mahamuni Pagoda which, despite being the second holiest pilgrimage site in the country and one of the top recommended places to see in Mandalay, wasn't that good at all... Not at all! It's main draw is a 4m high golden Buddha statue, and maybe that's what's so great about the place, but we didn't even get to see it! Women aren't allowed into the statue room, so Aisling had to wait outside, and when I tried to go in, I was turned away for wearing shorts! A disappointing visit all round.

Our second stop of the day, to Shwe In Bin Monastery, was much more enjoyable. The building itself was nice enough - an old, carved wooden structure - but we had great craic with a couple of monks we met there, certainly the highlight of the day for us! 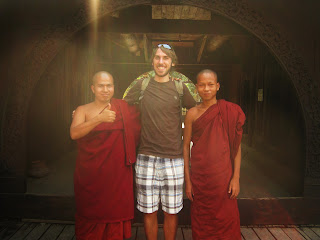 They said they watch Premiership, La Liga and Bundesliga matches every weekend, so we were chatting away to them about that for a while. Quite a surreal experience, having a chat about Villa with two Burmese monks in a Buddhist monastery in Mandalay. (They weren't too impressed with McLeish and thought we shouldn't have let O'Neill go. They are indeed wise...).

That afternoon, we rested, regrouped and headed out again, this time to see a few more sights around the city - Sandamuni Pagoda, Kuthodaw Pagoda and Shwenandaw Monastery. 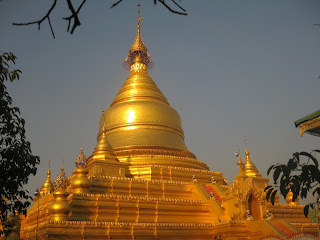 Kuthadow and Sandamuni were much the same, but both equally beautiful. In fact, I have photos from each of them but can't tell which is which... 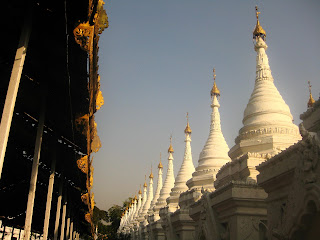 They were both full of energy too, not the solemn, respectful places of worship you'd expect, with a group of young, female monks (monkettes... monkees...?) playing hide and seek in among the hundreds upon hundreds of whitewashed stupas, and a local boy running up and down the paths flying a kite, which he eventually got stuck in a tree, and then impressively retrieved from said tree. 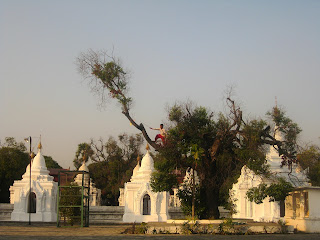 The next morning we got a boat across the Irrawaddy River from Mandalay to the small town of Mingun, and we had a lovely half-day there. The town itself really is tiny and so you can take your time, have a stroll around and see everything very easily on foot in a few hours. No need for a posh taxi or anything! 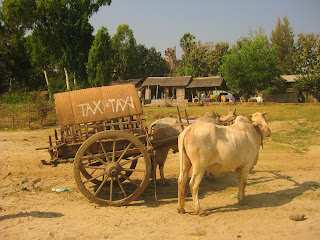 It could have been quite a famous place though when in 1790, work began on building the world's biggest stupa, which was set to peak at 150m, higher than the Great Pyramid at Giza. Unfortunately though, it was never completed due to an astrologer predicting that the king would die once the temple was finished. Work stopped after the base was constructed, so now it's just home to the world's biggest pile of bricks, a less illustrious title. 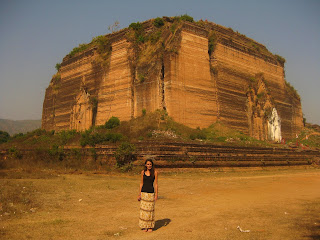 Mingun also has the world's second largest bell. It's just a town full of nearlys! 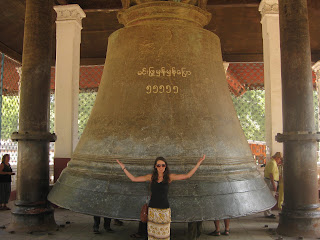 We also visited Hsinbyume Pagoda, a large whitewashed temple in the area. Mingun itself is quite a strange place as, apart from the handful of temples and pagodas (still don't know the difference between the two), there's actually very little else in the town, maybe a couple of shops, a couple of restaurants, and that's about it! I like it though, it makes a change from towns just being turned into tourist traps to squeeze any money they can out of visitors, at the expense of the town itself. 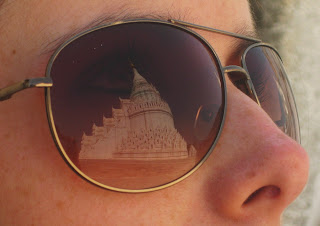 We got a boat back to Mandalay that afternoon and made our way up the deceptive Mandalay Hill for sunset. I say deceptive as, at least 4 or 5 times, when we were climbing up, we'd reach a point and think 'ok, this must be the top...' only to see another set of steps leading up further. I know it sounds stupid as it should be fairly obvious when you're at the top of a hill or not, but you'd be surprised!

When we finally did reach the top (the real one), we were less than impressed. There are some very nice places around Mandalay and nearby towns, but the city itself isn't that attractive, just an endless maze of identical dusty roads with no real character to the place, so as you can imagine, the view from the top of the hill wasn't really that good. We even left before the sun actually set. 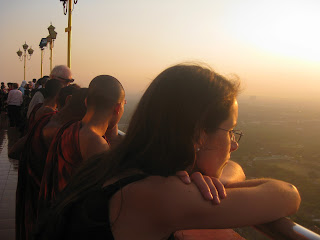 The next day was our most action packed yet, as we got up early to take a day trip to the three small surrounding towns of Amarapura, Inwa and Sagaing. This is apparently quite a popular route to take, so we left it up to our driver to show us the sights, and first on his list was a monastery in Amarapura where you can watch the hundreds of monks have breakfast. 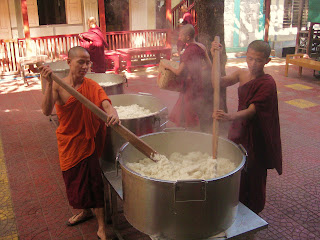 It was actually a really fascinating sight to behold, although the amount of tourists there was horrible. It must be quite annoying for the monks having to put up with this every morning, especially with some ridiculously obnoxious individuals unashamedly shoving cameras in their faces. I did take a few photos too of course... but at a distance! And even then I felt bad about it! 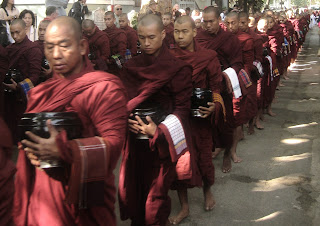 Because of this (and to beat the crowds for the rest of the day), we left early and went to the next town along, Sagaing, and in particular, Sagaing Hill. It was a great decision to leave the monastery early as we had the whole place to ourselves and what a beautiful place it was! Probably the nicest hilltop pagoda we've been to on our travels, shitting all over Mandalay Hill in every respect! 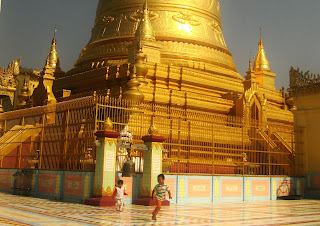 Even the tiled floors were pretty!

We stayed there for a while, enjoying the view, until the crowds started to catch up with us again, so we bolted off to the next town, Inwa, a former Burmese capital. We stopped for lunch before crossing the river and embarking upon a three hour horse and cart ride around the historic circuit. 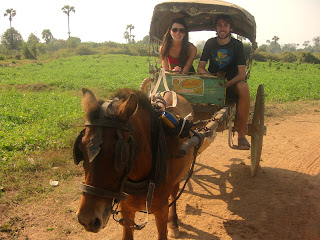 So, we made our way along the bumpy dirt paths, stopping every so often at temples, monasteries and watch towers. It's hard to believe this place was once an ancient capital, when now it's little more than a village. Well worth a visit though! 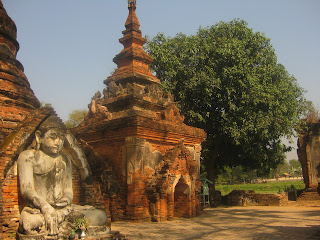 Our last stop of the day was where we had started off, Amarapura, this time to see the famous U Bein Bridge, the longest teak bridge in the world and an iconic symbol here in Myanmar. It was an incredible sight too, I've never taken so many photos of the same thing! We arrived there in good time, so we took a walk to the other side and back (1.2km each way) and then hired a boat to watch the sunset across the water. 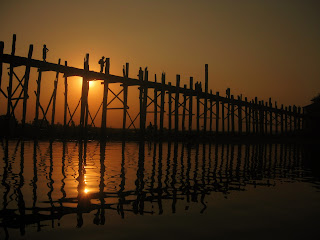 A lovely way to end the day, or any day for that matter! Every day should end with a view like this!

And that was our last day in Mandalay. The next morning we flew back to Yangon. We had actually kinda been looking forward to the flight back just for the airplane food. You see, the last time we were in Myanmar, we flew back to Yangon with Yangon Airways and got two slices of cake each. This time, we were with Air Mandalay, and all we got was a crappy cheese sandwich, and that was it! So there's my tip for this entry - don't fly Air Mandalay. Ya, they're safe and efficient and everything, if that's what you want from an airline... but if you want cake, fly Yangon Airways!

On our way into the city from Yangon airport, we shared a taxi with a lovely Indian guy named Roger. We got chatting and he was telling us how he was in town looking to invest and that he had found a 200 acre plot of land on the outskirts of Yangon for $60k, so whatever that is, €45k or something. So anyone looking to invest, Myanmar is the place to be! 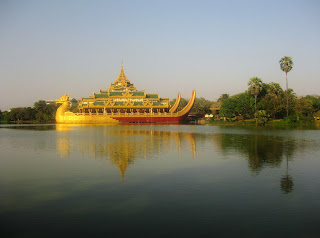 On our last day in Yangon and Myanmar, we just took it easy and went for a stroll around the city and up to Kandawgyi Lake, as seen above. We also returned to out tiny, tiny room in Yoma Hotel and made a little video diary. I say little, but it was actually anything but! Our video diaries are usually 4 or 5 minutes max, but for this one, I had to cut down 14 mins of video into something more manageable, so... eh... enjoy!

And that was Myanmar! Our second visit here, and although it was very different from our first time around, it was still a hugely enjoyable trip. We'd love to come back here again someday but who knows when that will be or what state the country will be in...

Anyway, as I said at the top, we're off on our summer adventures in two days so look forward to more blog updates from Vietnam, Laos, China and Japan! Until then, toodle-oo!
Posted by Mark O'Leary at 10:30 AM