Ubud! The place where we spent the longest stint of our holiday, and probably the best spot we could have chosen to do it! It's just a really nice town, with a lovely laid back atmosphere. Everything in the place has a real traditional feel to it, and although there were lots of tourists around, it didn't feel at all touristy, if that makes any sense... It's one of Bali's largest towns, but it doesn't feel like it at all. It has the heart of a small village, just bigger! 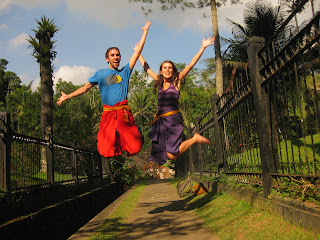 We rolled into town on the night of the 5th at the second attempt, (our first taxi broke down on the dual carriage way), and settled in to our new accommodation, Nick's Pension, a really beautiful set of traditional Balinese cottages, nestled in the countryside, but still right in the heart of the action. It was impossible not to feel immediately at ease.

Our first day in Ubud was just a lazy one, as we recharged our batteries. We'd been going from place to place for the last few days, so it was kinda nice not having a schedule. We could just go at our own pace. And what better place to do it than by the pool, surrounded by rice terraces! We really felt at home there, and sure why wouldn't we?! A couple of Paddies amongst the paddies! 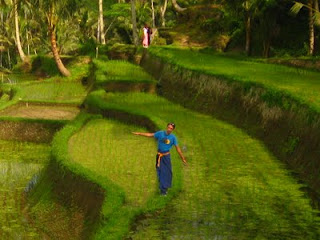 The next day we decided to be productive again, so we hired a driver and hit the sights of Ubud, including the temples of Goa Gaja, Gunung Kawi and Tirta Empul to name but a few, and donning a different coloured sarong at each one! 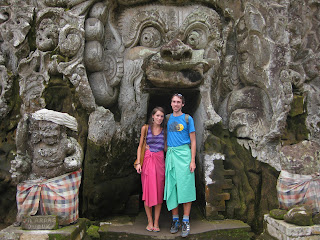 Afterwards, we went to a coffee plantation, where we were given free samples of locally produced drinks, such as Bali Coffee, Cocoa, Lemongrass Tea, Ginger Tea and Ginseng Coffee. Some of them were surprisingly good and it’s always nice to get stuff for free! It was one of those deals though that you’re given free samples and then expected to buy packets of the stuff to take home, but we just kinda drank and ran! 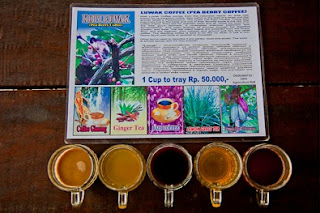 This place also produces Kopi Luwak, the most expensive coffee in the world I think. For those of you who’ve never heard of it before, these coffee beans get their unique flavour by being eaten by wild cats, and then, well, pooped out, collected and brewed. Mmmm…! And it’s €5 for a small cup of this stuff (presumably a lot more when bought overseas). Needless to say, we didn’t really fancy a cuppa. We’re not big coffee drinkers at the best of times, never mind paying 5 quid to drink it out of a cat’s arse! 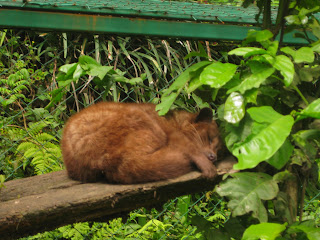 While we were there too, sampling the local beverages, we had a chat with our driver, which was good fun. Actually, when we first told him we were from Ireland, he said:

He invited us to a local dance he was performing in that night too, and we would have loved to have gone, but we were just too hungry and tired by the end of the day. And we had another tour planned for the next morning too, this time it was trekking through the jungles of Ubud.

There were meant to be 16 people on the tour, but in the end it was just us and a Swiss couple, which actually worked out better as we could take our time a bit more. It was a really nice, chilled out day. We got to see some really cool rice terraces, explored some jungle paths and Balinese cottages, and even stopped along the way for a nice coconut break, fresh from the tree! 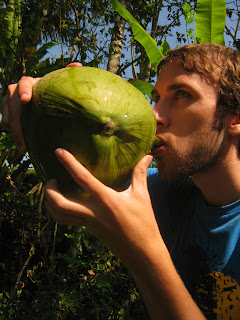 In this tour, we stopped off once again at a coffee plantation. We were dreading that it would be the same one as yesterday, in case they thought we were just coming back again for free samples… Thankfully it wasn’t, so we could try out some more drinks, guilt free! And while we were there, we also tried out some new fruit. (It’s weird, when it comes to food, I always hate trying new things, but not when it comes to fruit for some reason!) We had a piece of salak, often called snakeskin fruit, which was delicious! It tastes kinda like a strawberry but dryer. And also, a tamarillo, which wasn’t nice at all, kinda like a mix between a tomato and a kiwi.

In other fruit related news, at the plantation we also saw where pineapples come from! I always imagined them hanging from palm trees, like coconuts or something, but it turns out they grow from the ground up! Who knew?! 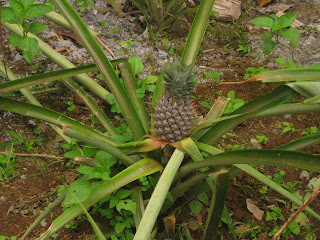 We finished up the day by having a buffet dinner overlooking Lake Bayan and the surrounding area. It was an amazing view and the food was lovely too, so a nice way to end the day.

And so, onto our last day in Ubud, a quite cultural one really. In fact, a very cultural one, starting with a lovely Balinese massage and topped off with a traditional Kecak dance in a nearby temple. The performance was very memorable and it was a pleasure to experience the music and rhythm of it all, especially in these surroundings. 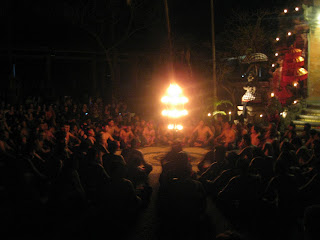 The next day we had to wave goodbye to Ubud, (a serious contender for best destination) and head north to our next stop, Bedugul, a simple mountain town on the banks of Lake Bratan. And although it’s only a small place, and not exactly a tourist hotspot, it really stole our heart. They’re mad for their fruit and veg here too, from the countless stalls along the roadside selling fresh strawberries, to the women walking around with bucket of corn on their heads! Even take a look at the town’s main roundabout! 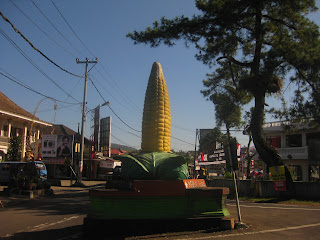 We had a great couple of days here though, and a lot of that is down to our accommodation, The Strawberry Hill Hotel (even if we did get stuck in the ‘Loser’ cottage…) 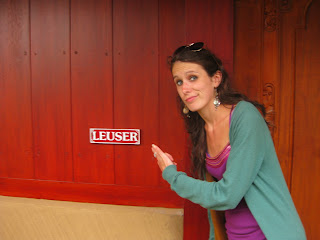 We also found out that you could get food delivered to your room, so guess where we had all of our meals!

Our first day in town was a lazy one, as we just walked around the lakeside and stocked up on salaks and strawberries at the local market. We more than made up for our lack of activity the next morning though, by visiting the place that brought us to Bedugul in the first place, the Treetop Adventure Park! It was so much fun! One of the highlights of the whole trip for me, climbing through the trees, across high wires and down ziplines. Here’s an artists impression of what it was like:

We arrived pretty much as soon as it opened, so we had the place to ourselves, no queues, no whiny kids and the full attention of the instructors. Some of the courses were really challenging too, testing your balance and upper body strength. It was like being on Gladiators, just with more trees, and less giant foam hands… 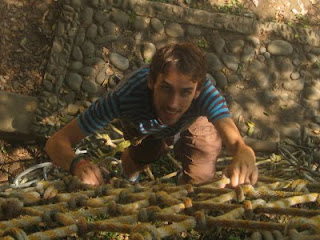 We were able to do everything though first time, so we felt pretty good about ourselves! And afterwards we watched some macho Australian douchebag try and fail at the course, which made us feel even better! It was a great place though, and I’d love to visit somewhere similar again in the future. 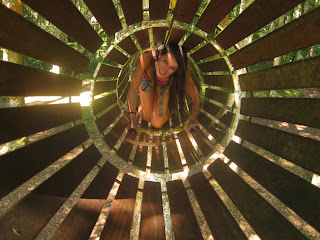 After the park, we took a stroll down to Lake Bratan to see the Ulun Danu Temple. We even hired a swan boat to paddle around the lake. In fact, you can see our third video diary here! On a boat!

It was a really nice temple too, and we had a good paddle around, if only it wasn’t so cloudy…

We stocked up on salaks before heading back up to the hotel, (Seriously, I can’t get enough of them! They’re fast becoming my favourite fruit! I had about 4 or 5 as soon as we got back to our room. I really hope we can buy them in HK…)

And that was pretty much that for our time in Bedugul, and in Bali as a whole. The next day we got on a bus to Denpasar, and flew out to our next stop and the next island along, Lombok, for some much needed beach time!
Posted by Mark O'Leary at 1:24 AM