In this entry, you're going to get two for the price of one! Mount Bromo and the Ijen Crater, two volcanoes and two equally amazing, although very different experiences. So including Mount Merapi, that's three volcanoes in four days! We've definitely exceeded our volcanic quota for this holiday anyway, and probably for the rest of our lives! 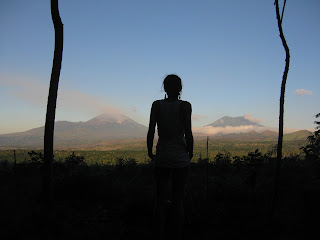 As I finished up last time, we had just signed up to a tour package for the next few days and were about to set off on an 11 hour minibus ride to Mount Bromo. And lucky us, we got to sit up front with the driver, who spent the entire journey spitting, burping and throwing rubbish out the window. Not to mention the zero leg-room and the incessant beeping at anything in front of us. So that was a fun trip! Having said that, the 11 hours actually went by pretty quickly, and we did stop a couple of times to get food and mini bottles of coke.

We arrived in Ngadisari (a small mountain village and our home for the night) at around 8pm and pretty much went to bed straight away as we were wrecked after our journey and also had to be up at half 3 the next morning to see the sunrise over Bromo (and this time we actually did get to see the sunrise!). 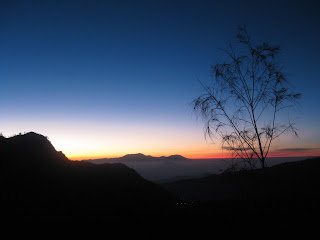 Now, when we were packing for our holidays, we thought to ourselves, 'Indonesia, that's on the equator so it's probably gonna be roasting. We won't need to bring warm clothes...', but of course we overlooked the possibility of climbing volcanic peaks in the middle of the night! Rookie mistake. And so, unsurprisingly, when we stepped out of our mountain cabin at 3:30am, it was absolutely freezing! I luckily had a hoodie with me, and a French family that were travelling with us (who strangely had no English at all), gave Aisling a jumper to wear, so at least we had something. We were still frozen though...

Just a side note though before I go on, everyone here is French! Everyone! I'd say about 95% of the tourists we've met so far in Java have been from France! We can't understand it!

Anyway, we were driven by jeep about halfway up Mount Penanjakan, a nearby peak with a panoramic view of the surrounding landscape, and then made our way to the top by foot. It was a steep climb up, and a long wait in the cold and dark for the sun to rise, but it was worth it all ten times over for the view. It was out of this world, and I mean that quite literally! It looked like the surface of the moon or Mars or something! 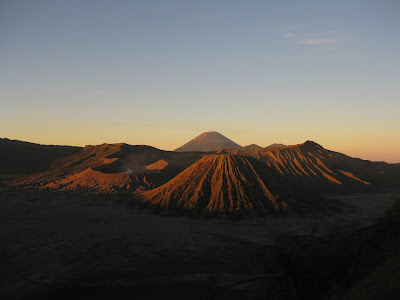 It doesn't even look real! It was so far removed from anything we had seen before. What an incredible sight, we couldn't get enough of it! Serious Bromo-sexuals right here!

After the viewing area, we were driven down to the heart of the landscape seen above, and to the base of the Mount Bromo crater itself, and seeing as it had erupted as recently as this February, the whole area was completely covered in fine ash. 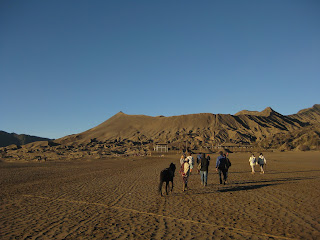 I could make a joke about me also being covered in fine Ais, but that would just be cheap and tasteless, so I wont...

The climb up felt just like walking through the desert as each step sank beneath your feet, but again it was worth it for, not only the surrounding view, but also a peek inside the smoking crater. Probably quite dangerous though, standing on the slippery, ash-covered rim of a volcano that erupted less than 6 months ago...

Some people chose to take the quick and easy route back down to the bottom:

But we descended in a more dignified manner. On a horse!!! Ok, it was barely even a horse, my feet were nearly touching the ground, but it was kinda cool trekking across this ashy desert. I felt like some sort of volcanic nomad! 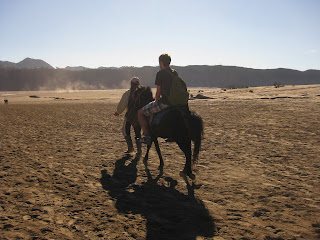 And that was pretty much it for our brief visit to Mount Bromo! We went back to the hostel, got some breakfast (consisting of green bread and mini bananas), got our bags and hopped on another minibus headed east to the Ijen Crater. This time we made sure to grab good seats on the minibus (lots of leg room and right by the AC) and so we just snoozed our way through the 7 hour journey. 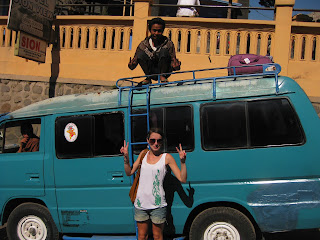 When we arrived in Sempol (a quaint little village in the middle of nowhere) it was still quite early, so we went for a small wander to the nearby waterfall (which we couldn't find) and the local hot springs (which we could!), and after a refreshing dip, we were all ready for dinner back at the hostel! They really put on a great spread too, with plates and plates of stuff brought to our table - chicken, rice, noodles, omlette rolls, fried potatoey things, watermelon and lots more too! And it was all surprisingly tasty! And then yet another early night, as we'd be up before the sun again the next morning.

We were dropped off at the base of the volcano with a steep 90 minute climb ahead of us to the top. It was seriously tough going too, especially as the air thinned with the increasing altitude, but the anticipation of the views from above spurred us on every step of the way, and we weren't disappointed. 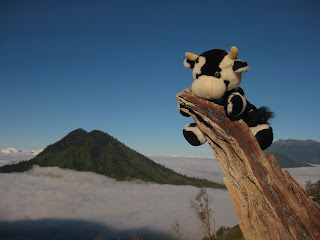 We spend our whole lives looking up at the clouds, so it's a strange feeling looking down on them from above. It was such a different landscape too compared to the lunar plains of Bromo. And there was even a sharp contrast of sights on offer at the peak of Ijen itself. On one side you had green mountain tops poking through a heavenly sea of clouds, and as you turned around, there was a barren crater filled with a steaming, turquoise sulphuric lake. 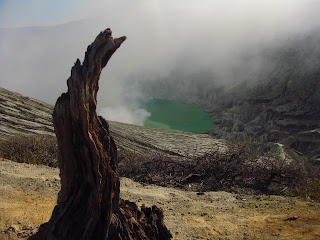 Sulphur seemed to be a big business in the volcano. As we made the climb up, we'd see people carrying baskets of it over each shoulder, huge yellow blocks of it. And then in the crater itself, there seemed to be a mining camp on the surface of the lake. It must be a tough job though; carrying baskets of the stuff up and down the mountain all day long. And worst of all was the smell! A real deep eggy smell! And we were only on the crater's edge, I can only imagine what it was like by the lakeside. I wouldn't be able to hack it, but these guys just have to sulphur in silence! Well, I guess it's all for the crater good! 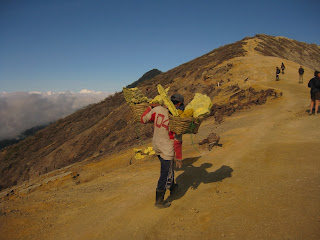 We stayed up there for well over an hour, exploring, taking in the views and also making another video diary! Look, here it is!

We eventually had to say goodbye to this stunning panorama and to Java as a whole, as we strolled back down to catch our bus/ferry to Bali. And that also meant the end of our little tour package. It was well worth it though, not just for the price but more so the convenience of it all. The tour had also saved us a day on our planned schedule, so we had a day to kill before heading to our next destination, Ubud. We decided to spend that day in Legian, a town in the south of Bali. We hadn't intended on spending any time in that part of the island as we heard it was quite touristy (it definitely was, and all Australians! We had gone from France to Australia in the space of a few hours!). The only reason we went there was to go to a waterpark the next day! 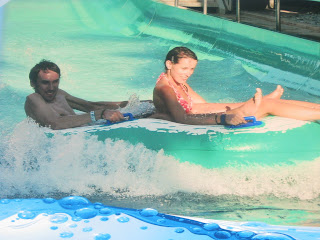 And what a fun day we had! There really is nothing better than a good waterpark, especially when you're in Bali, under the hot sun and tropical trees! So we stayed there for pretty much the whole day, going on the rides, hanging out in the pool, tanning ourselves (or rather, burning ourselves) under the sun, and even having a few games of table tennis, which Aisling was surprisingly good at! Not as good as me though obviously...

We really had a great day though. And then onto our next destination, and our home for the next 5 days, the cultural heart of Bali, Ubud!
Posted by Mark O'Leary at 6:55 AM