So, here we are, on our second round of travels around South East Asia! Our first 6 weeks of travelling came as we left Ireland, before our big Hong Kong adventure, and obviously lots has happened since then, but that’s a story for another day… Right now, it’s August and we’ve both got the month off, so we’ve hit the road again! This time heading further south to Indonesia, Malaysian Borneo and Brunei. So, I guess I’ll take it from the start, South East Asia, Part 2! We set off for Indonesia in a kind of round about way. Our first port of call was Yogyakarta, on the island of Java, but we had to go first via Singapore and then Jakarta. It was the easiest/cheapest way possible. So, we left HK on the morning of the 29th for our first flight to Singapore with Tiger Airways. We had a 4 hour stop over there (which was a good thing as the plane was delayed by an hour and 20 minutes) and then onto Jakarta (again the flight was delayed, this time by an hour and a half!). It was our first time flying with Tiger Airways, and hopefully our last, they’re rubbish.

One good thing about the flight though, there was a guy dressed up in swimming gear who made an announcement that it was his birthday and got everyone on board to sing happy birthday for him! It was good fun, although I’m sure most people were still focused on the 90 minute delay… 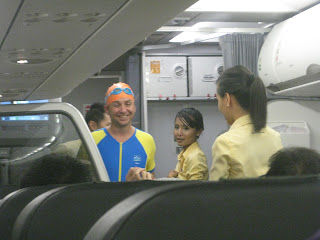 Having said that, the delay actually didn’t affect us at all, as our connecting flight to Yogyakarta wasn’t til 6am the next morning, and we were planning on just sleeping at the airport anyway. So, we grabbed our bags, picked a spot for the night and settled in.

It certainly wasn’t the nicest of airports to spend the night, it was noisy, hot and crowded, and with nowhere comfortable to bed down, everything you’d expect really. But we made it through the night, getting some bit of sleep at least, while managing not to get robbed too, which is always a bonus! 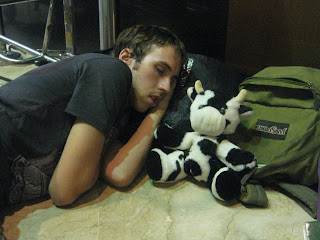 And so we awoke at 4am to check in for our flight, or at least what we thought was 4am… (we didn't realise we were actually in a different time zone). Luckily though, we had gained an hour instead of losing one, so it was actually 3am. That could’ve been disastrous… Still though, as we were up we thought we might as well find out where we should be checking in, and it’s a good thing we had that extra hour, we needed it! Jakarta is the most poorly organised airport I’ve ever been in, (even Bagan was 100 times better run, and they didn’t have TV screens or conveyor belts!).

We walked up and down the airport and couldn’t see our flight info anywhere, so we just enquired with the attendant at the first check-in area, D1. He told us our flight would be at area D2, so we thanked him and moved down to D2… where we were told that actually we should go to F4… so we went to F4, which was closed. It did have a full list of flights though… none of which was ours. So, we went back to D2, to make sure that it definitely was at F4, and that there definitely WASN’T another terminal at the airport. We were told no, definitely F4, so we returned to F4 and waited for it to open. When it did open, we were told we needed to go to terminal 3. Terminal 3?! Since when is there a terminal 3?! Sigh…

We jumped in a taxi and made our way 2km down the road to the ultra clean, quiet and modern terminal 3. Why oh why didn’t we sleep here…? (We also saw Jacob from Lost in the lobby!) 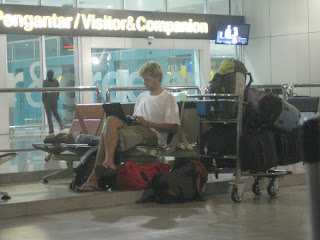 Well, not actually him, but it looked like it!


At last, we found our flight and jetted off to Yogyakarta (or Jogja, as it is known), where we could finally start enjoying our holiday! Or maybe not…

When we arrived in Jogja, we got our bags and made our way out to the lobby, where we were due to be collected by our hostel… but there was nobody there. We waited for a good half an hour, but nothing. And because we thought we were being collected, we didn’t bother to write down the address, or phone number, and there wasn’t any internet in the airport… We asked some taxi drivers could they take us there, but none of them had ever heard of the place! Hmm… shit. The only option we had was to get a taxi to take us to an internet café, look up the address of the hostel, and then get dropped off there. So, we did all of that, got the address, got directions, even got GPS coordinates, and still we barely found it! We knew the exact geographic position on the surface of the Earth, and still the place almost eluded us! That’s how far out of the way our hostel was! It was apparently only 5 mins from the city centre, bullshit! More like 20 mins and in the middle of nowhere! Still, at that point we just needed a bed, so we took a well earned nap and then reassessed the situation.

We said we’d head into the city centre to see what it was like, so we asked the hostel to call a taxi for us. After about 20mins of waiting, we enquired again, only to be told that no taxi could find them… where the hell were we?! And how is this place even in business?! They said they could give us a lift in though, on the back of a motorbike, one by one… We had no other choice really so I went first - a 20 minute bike ride, 20 minutes of waiting for him to return for Aisling, and then another 20 while he dropped her in... we really couldn't do this every time we wanted to go into the city centre! So, as soon we were reunited again, we checked into a new hostel. We had no other choice really. We returned to the old place, got our bags and vowed never to speak of it again (with the help of our driver from that morning, probably the only man in Jogja who knew where the place was!). It was a really tough start to the holiday, and when that happens you always think 'will the whole thing be like this?', but we dusted ourselves down, drew a line under everything and took it back to the beginning. After a nap of course!


So, feeling refreshed and reinvigorated, we started our holiday in Jogja again! We went out to get some dinner but on the way we bumped into Herman, a travel agent who kept trying to sell me tour packages earlier as I waited for Ash. He wouldn't leave me alone then, so I took his number and said I'd call him later, just to get rid of him, but now he'd found me again, what are the odds?! At first, when he came running towards us, calling my name, I thought, 'oh no, not him...', but this time he had a leaflet with all of their deals and prices, and they were actually pretty good! There were a few places in Java that we were planning on going to after Jogja, (Mount Bromo, Ijen etc.) but we weren't quite sure how we were going to get there (bus and train info here is pretty hard to find, and even harder to understand), but this guy had tours to all of these places in one cheap and easy little package! Plus, a ferry onto Bali after we were done! Suddenly Herman had something to offer. We said we'd look into it and ring him tomorrow, and this time we actually meant it! (He found us again after dinner, seriously, this guy in unstoppable, he's like the terminator! Or rather, the Hermanator!) That night we went to bed quite early as we had a whole host of activities organised through our hostel for the next day, starting with sunrise over Borobudur! 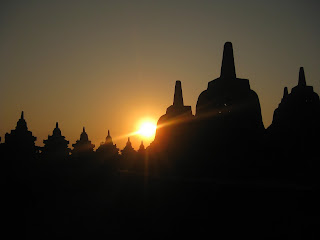 ...even though the place didn't open til 6, at which point the sun was already up... Still though, it was nice seeing it just after sunrise at least, and it was pretty quiet at that time too. Borobudur is like the Indonesian Angkor Wat, and like Angkor, it looks much more impressive in the aerial shot. Don't get me wrong, it was lovely, but with a monument that big, I think you can only really appreciate it fully when you can see the whole thing. 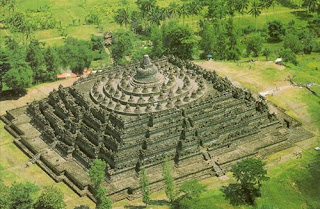 Amazingly, it was built in the 8th century, but was abandoned around the 1300s and lay undiscovered beneath volcanic ash and jungle growth for almost 500 years! The fact that it remained hidden for so long, makes it all the more mysterious and appealing. And it is very impressive really, although an awful lot of restoration work has been done.


On the way in, we were given sarongs to wear, which would be a recurring theme for any temple we visited in Indonesia. Here's Aisling creatively sporting hers: 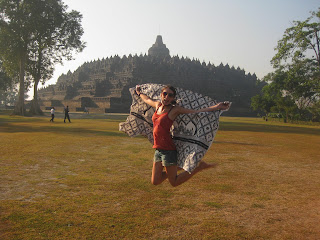 After Borobudur, we headed to Mount Merapi, Indonesia's most active volcano which last erupted in October, killing over 350 people. There are no major towns in the area, so there were no real Pompeii-esque ruins, but you could see the aftermath alright in terms of felled trees and scorched earth. Plant-life had started growing again though, and the locals had started to rebuild structures, but being honest, it's kinda pissing into the wind rebuilding your home next to the country's most active volcano... 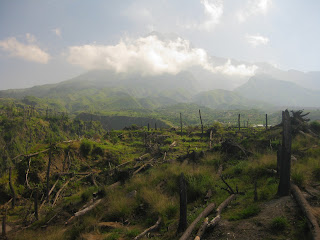 Our last stop of the day was Prambanan, the Hindu answer to the Buddhist Borobudur. Built in the 9th century, it was similarly abandoned for years and heavily damaged by a 16th century earthquake. But like Borobudur, it has gone through heavy restoration, and really looks stunning today. Even better than Borobudur I'd say! 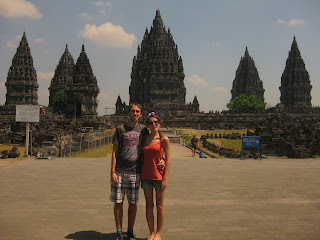 It was pretty quiet there too, even though it was a Sunday. We even found a nice secluded place round the back to chill out, take our customary jumping shot and also record our first video diary! So, if you want a 4 minute summary of everything I said so far, look here:

I probably should have put that at the beginning... It would have saved you a lot of reading... Oops!

Also, on the way in to Prambanan, we saw a guy dressed up as Dora the Explorer, and I've never seen a cartoon character look so depressed. He was just sitting on a chair under a tree, and every so often he'd make an attempt to act cheerful, but you could tell he was really dying inside. And it's funny because we were only talking recently about whether these suited characters are actually smiling themselves when posing for photos... this guy definitely wasn't. 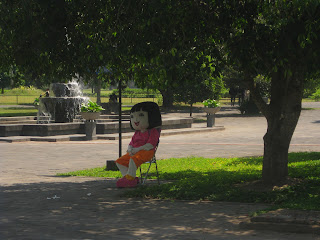 When we got back to Jogja, we sorted out our trip for the next few days. As I said, we had planned to book it with Herman, but when I rang him there was no answer, so we just booked the same tour with someone else. Unlucky Herman! Actually, we were terrified of bumping into him again for the rest of the evening seeing as he always managed to find us... but we survived the rest of the day, and the next morning made a swift getaway to our next destination, Mount Bromo!

We only really had two days in Yogyakarta, and one of them was spent getting out of our accommodation mess, but we did enjoy our time here. The town itself isn't great, but it's a good hub to see the surrounding areas, Borobudur, Prambanan etc., so in that respect, it's well worth a visit.
Posted by Mark O'Leary at 6:19 PM