And so onto La Paz - the highest capital city in the world, but not as high as our spirits or adrenaline during our two action-packed days in town. We only had a short stay here, but it was a very memorable one - from risking our lives, to watching others pretend to risk theirs - La Paz had it all! 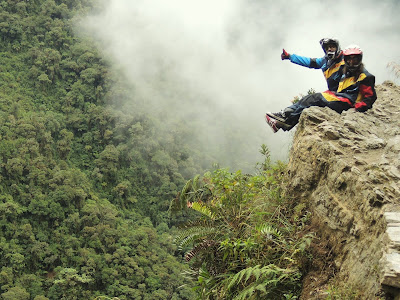 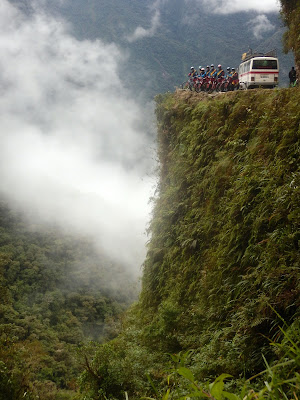 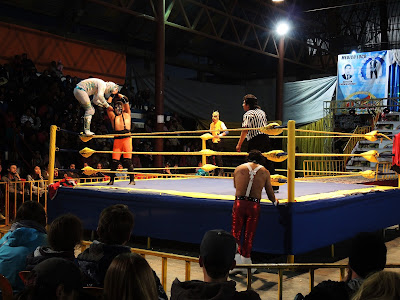 Being so high up causes its own problems, but as we had entered from Chile, we had slowly been acclimatising for the past week, so the altitude didn't have much of an effect on us. Anyone flying in here though will feel every one of its 4,000m as soon as they step off the plane. This is why the Bolivian national football team have such a good home record. On paper, they're one of the worst teams in South America, but when opposition teams come here, they just can't hack the high altitude! 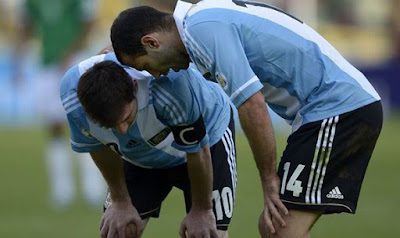 I think the headline says it all.


We arrived into La Paz on a relatively comfortable but cold night bus from Sucre. We were treated to Police Story Lockdown, starring Jackie Chan - our second time watching it in two weeks - and just like when we saw it in Peru, it was all in Mandarin, with Spanish subtitles, so we still have very little idea what was going on!

After twelve hours on a bus, we were ready to eat, and we only had one thing on our minds - Subway! (The funny thing is, we actually don't eat it at all in Ireland!). It opened at 10am, so we were at the doors at 9:55, raring to go. Unfortunately, the staff weren't as eager. If they say they're open at ten, you'd think that would mean they're ready to go at ten! Not so, and we had to wait another half hour for them to get everything set up. Still, at least it would be worth the wait and fresh from the oven, right? Wrong. Everything about it was atrocious! I don't know what they were doing for that 30 minutes but it wasn't baking bread and cookies, as we had to make do with yesterday's leftovers. There wasn't even Coke in the machines! It was just a shit show from start to finish. We took two bites and dumped the rest. Abysmal. 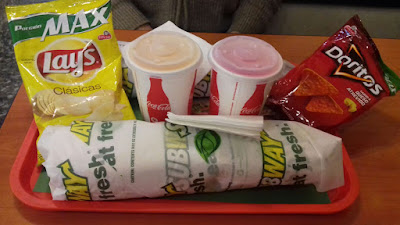 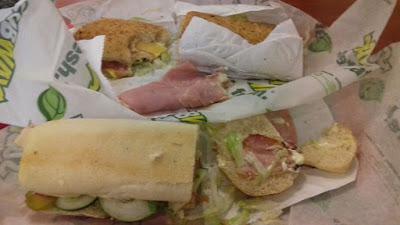 When we were in Arica, we walked for 45 minutes to find a Subway and were left empty handed. That was a better Subway experience than this one.

Thankfully, the rest of our stay in La Paz was a lot more positive, and what better way to kick off our time in town than going to see Bolivia's version of WWE - Cholita Wrestling. 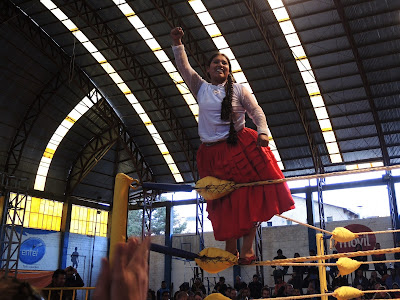 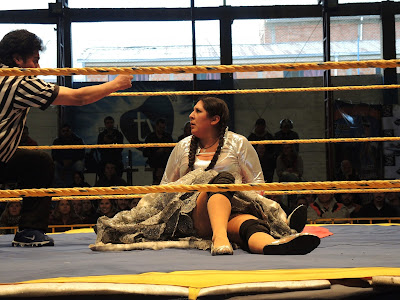 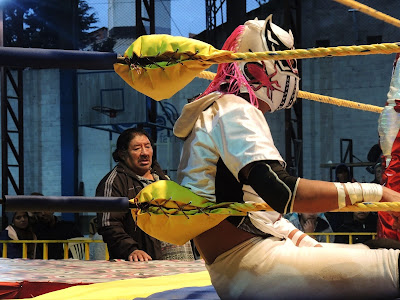 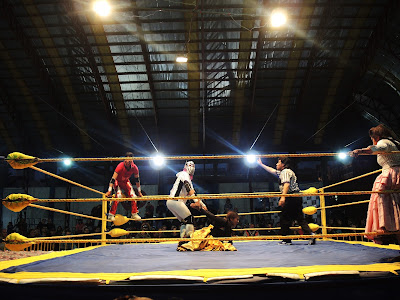 It was really, really bad, but so bad that it was actually kinda good!

Even though there are both male and female wrestlers on show, the Cholitas are certainly the main attraction; dressed in their traditional Bolivian clothing, with braided hair, pleated skirts and bowler hats (which I find hilarious!). 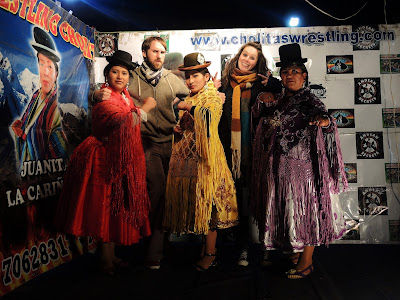 The hats look so out of place! And it's not just an eccentric part of the costume either, this is the traditional dress that you'll see all over the country. They sit so precisely on their heads too. I don't know how they stay on!

The whole thing plays out as your typical wrestling show does - there's a bad guy being all sneaky and underhanded, and a good guy who eventually triumphs. The local crowd really get into it as well, even throwing food and drink at the wrestlers. As all of the tourists are up in the front row, we even got showered ourselves (whether accidentally or not). It was all part of the experience though. Tickets aren't that expensive either, and include transport there and back, popcorn, coke and a free little souvenir. All in all, a few hours well spent! 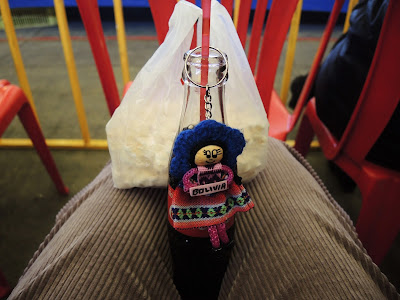 On our second, and last, day in town, we took the excitement to the next level, taking on the infamous Yungas Road, more popularly known as Death Road. We've done a bit of cycling in the past and never randomly crashed into ditches or walls or fences, so that was my logic for us not careering over the edge and falling to our deaths on this, the most dangerous road in the world. 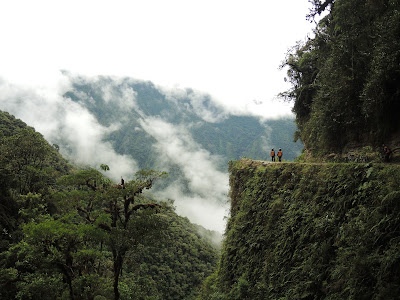 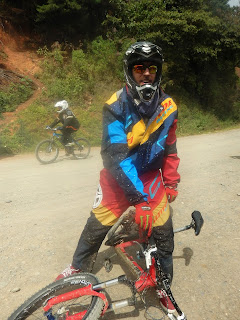 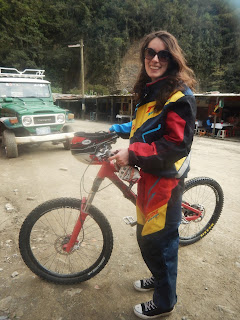 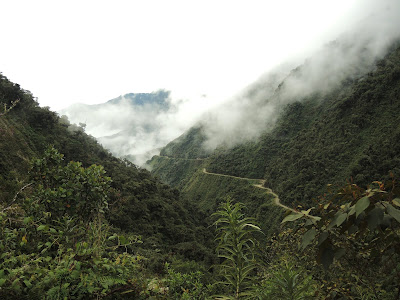 We did our homework beforehand and went with a highly rated company in Altitude Adventures. It ended up costing us about €80 each for the day's activities, which is one of the higher prices you'll pay (more like Debt Road, am I right?!), but for something like this, I think it's worth taking a pricier option. You get what you pay for, and I didn't want our brakes to fail or tyres blow at the wrong moment, just so I could have a slightly fancier funeral. This covered all the transport, bikes, gear, food, drink etc. during the day, so it actually wasn't bad value for money. And we got a free t-shirt too! 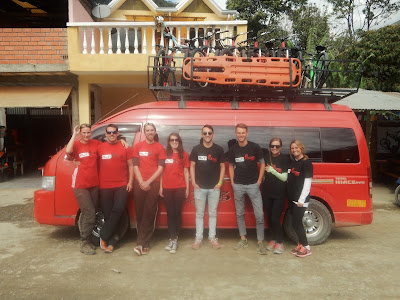 That was our group for the day, and actually, after that picture was taken, they got us to take a jumping picture, which the two of us nailed (obviously), unlike the others. 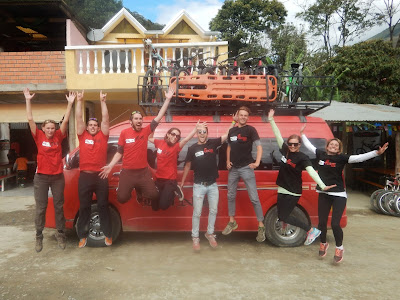 
The day started with a 90 minute drive from La Paz up into the mountains where we got kitted out and began the first leg of our descent, along the much safer, wider and well-paved main road. This was just to get us used to cycling downhill, and was loads of fun! Cycling downhill is the best and here we didn't have to worry about falling over the edge or hitting rough terrain. It was a great way to start the day. 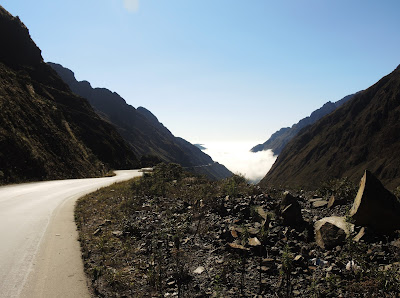 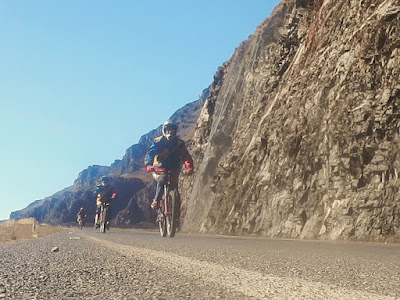 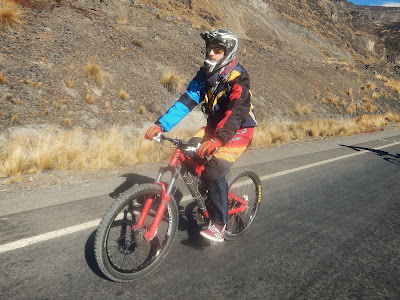 After a short break for lunch, we then started Death Road proper. This was everything the first road was not - single lane, rocky terrain, with a sheer drop over the edge. The road used to be the only passage for all traffic, where 200 to 300 people would die annually, but a new highway means that we didn't have to deal with scenes like this: 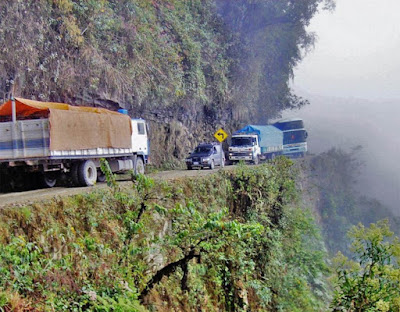 Nowadays, most of traffic is cyclists, but there have still been 18 deaths since 1998. We weren't among them though, which is the most important thing, and the 64km descent was actually very enjoyable, and not really nerve-wracking at all. Once you start cycling, you kinda get into a groove and don't really notice the drop anymore. You can go at your own pace too, so there's no pressure to go out of your comfort zone. We came out the other end in one piece, my only injuries were two big blisters on the palms of my hands from spending the day riding over such bumpy terrain. Even now, over a month later, it's still not fully healed. It's like the stigmata! 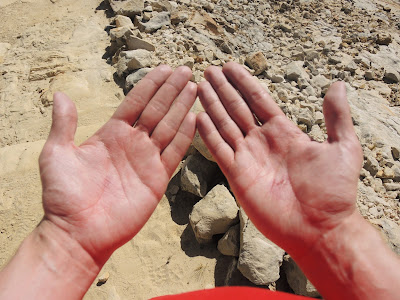 Christ on a bike!

Here's our video diary from the end of the day. It's a lot more dangerous than the video suggests!

And that was that for La Paz! Even though we had a great time here, we actually didn't see much at all of the city itself, though from the little we did see, that might be a good thing. For now it was off to Lake Titicaca and our final stop in Bolivia - Copacabana!
Posted by Mark O'Leary at 12:17 PM