For this entry, I should just cut the chat completely and make it into a slideshow, cause we got some absolute belters here! I don't mean that in an immodest way, it's just such an insanely beautiful island that it would be nigh on impossible to take bad pictures. With its clear turquoise seas, bright blue skies, a shimmering golden sun and warm orange sunsets, it's a cliché writer's paradise! Take all of that and mix it together with a few colours that I've never even seen before; and that was Boracay! 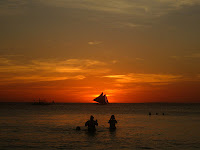 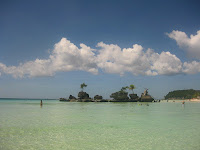 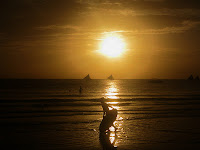 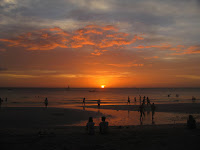 In the weeks after Christmas, we were desperately trying to find a suitable spot for the Chinese New Year holidays. Boracay was our first choice but flights to either of the nearby airports, Caticlan or Kalibo, were too expensive for us. We turned our attentions to some other possible destinations, but each one failed in comparison to Boracay. We had to go there, it was just a case of how.

We trawled airline after airline, fruitlessly trying to find a way around, and then, after hours and hours of research, a little loophole appeared. Although the two above were the main entry points to Boracay, there was another airport on Panay Island, although it was on the complete opposite side to the Boracay ferry port. Still, the flights were much, much cheaper and it only took 5 hours by bus to make up the ground, so that's where we flew! Off to Ilo Ilo! (That's actually its name by the way, not just binary code). 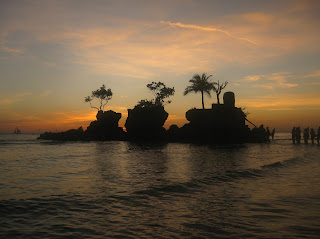 That's Boracay again, not Ilo Ilo... I just wanted to put in another picture...

The only thing about the flights though was that they were at quite an awkward time. Awkward in the sense of night flying, but great for getting the most out of our holiday. After Aisling finished work on the Friday evening, we got packed, got food and headed to the airport for our 02:15 flight to *spit* Manila. Thankfully, we didn't have to spend any time in the city itself, just the 4 hours waiting for our connecting flight. From here, I’ll do a bit of fast-forwarding (if only we could’ve done this at the time!) - landed in Ilo Ilo, taxi to bus station, bus to Caticlan, ferry to Boracay, and tuk-tuk to hostel. All in all, about 8 hours from Ilo Ilo airport to the front door.

The next morning, we got our first taste of Boracay's pristine beaches. In fact, when we first walked out onto the sand, I couldn't stop the tears from running down my face. I hasten to add, it wasn't a case of being so overcome with emotion because of the beauty of the island, but rather, the sun was so bright and the sand was so white that I literally couldn't keep my eyes open! I quickly invested in a pair of sunglasses. 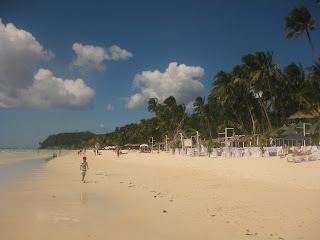 The place we were staying, La Bella Casa, was nothing special at all (they lied to us... in Italian!), although having said that, it was quite well located just off White Beach. The main problem was that we had booked a  private room for ourselves, but on arrival we learned that we would be sharing with another couple. We were assured though that it would only be for the first two nights, so we were very Irish about the whole thing, "Ah sure it's grand, don't worry about it...". However, after the second night, another couple moved in. It was getting ridiculous at that stage so we kicked up a proper fuss, and by that I mean we politely complained. And it worked! We were upgraded to our own double room for the rest of our stay! I guess the squeaky wheel does get the oil. 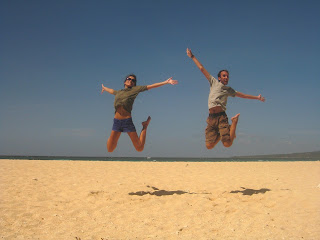 The other thing about the place, and this goes for The Philippines as a whole really - they're very religious. Actually, I'll rephrase that - they're very Catholic - and it's a funny distinction. All countries around here are very religious, whether it's Buddhism, Islam, Taoism etc. but we often go to see and admire their relics, statues and places of worship, and I always find it quite spiritual and enriching. And we've stayed in accommodation before, decorated with such ornaments, and it's great.

But they had the same thing in La Bella Casa, except with portraits of Jesus, crucifixes and the like, and being honest, I found it quite cheap and unpleasant. Maybe it's different when it's "your" religion (and I use that in the loosest possible sense). I just thought it was a bit tacky and in your face. Give me a chubby, Buddha statue or a Muhammed cartoon over a Virgin Mary statue any day! 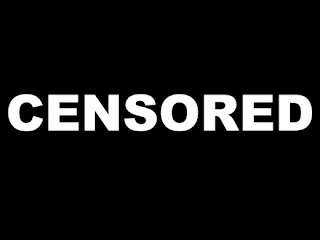 We spent most of our days here on White Beach so I won't go into too much detail about that. I'm sure you can gather your own impressions from the pictures. At night, there was a lovely promenade along the beach front filled with nice restaurants, shops and bars; always with a great atmosphere; whether it was fire dancing, live music or fireworks. 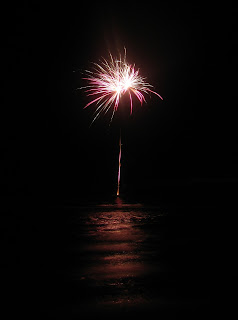 One night they were even showing a Villa match! (a 2-1 win over West Ham in case you're wondering, what what!!)

We took a couple of mini-trips during our time here too. First off, up to Mt. Luho, which had a nice viewing deck that gave you a 360 degree view of the island. It also had a little zipline through the trees. We hoped it would go all the way down to the beach below, but alas, we had to settle for the short hop from one platform to another. It was still fun though! 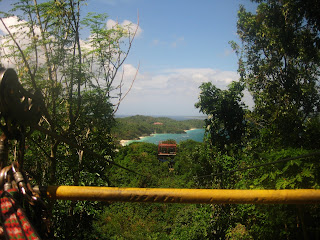 The following day, we deviated from our usual routine, and headed to the other side of the island to the much quieter and more secluded, Puka Beach. 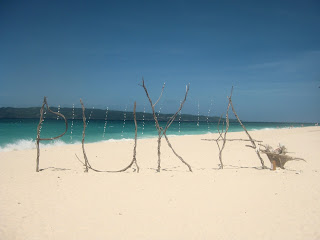 It was very different to our local spot, but equally as beautiful. The place was a lot more rough and ready compared to the seemingly manicured White Beach, and it had a nice cool breeze to take edge off the heat, which I found to be just too much some days. A minor complaint, I know.

We also made a video diary there, so check that out!

And I'm up to date! Yes!!! So, I have one day to relax, safe in the knowledge that I'm ahead of the game, before we fly up to Russia (not Sri Lanka, as the video predicted) to begin another summer of travels. I'll really do my best to write as we go this time, so stay tuned for (somewhat) regular updates from a whole host of new countries! Watch this space and peace out for now! :)
Posted by Mark O'Leary at 5:13 AM