Once again, we have come full circle, back to where we started our Japanese adventure three short weeks ago (or in real time, 8 long months ago!). And ever since we first stepped off that plane, Japan has surged ahead in the 'favoutite country' stakes, ruthlessly sweeping all competition aside (sorry Myanmar). Many of the cities and countries we have seen in our time in Asia are well worth visiting from Hong Kong, but Japan is one of the few places we've encountered that's worth the journey no matter where in the world you are!

By the time we reached Osaka though, I must admit we had run out of steam a small bit. Japanese summers are hot hot hot, especially in the cities, so the majority of our time here was spent in cool down mode. We still made the most of it, just at a slower pace. 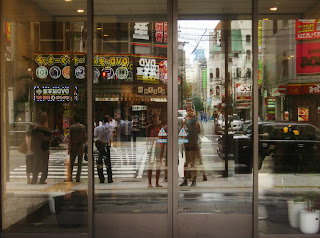 One of the best things about our time in Japan was the ease of travel - the speed, the comfort, the efficiency and of course, our JR passes were worth their weight in gold. Especially following on from our topsy-turvey path through Vietnam and Laos. And this journey was no different. Just one hour down the track from Kyoto and here we were! In a way, it's hard to feel like you're in a new place after such a short trip! It takes me an hour to get to school in the morning, that amount of time means nothing anymore!

Our first bit of tourism came the next afternoon as we travelled to Osaka Castle. It was another hot and heavy day, although equally damp and drizzly; the kind of day that throws up a raincoat dilemma. I always hate rainy days like this while travelling. Not just for the weather itself, but I just think places look so much better with blue skies. 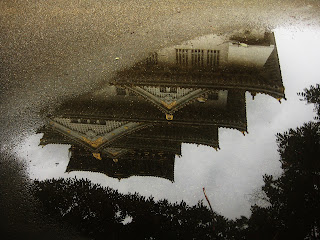 I guess great, big puddles can be nice too though...

Later that evening, we visited the Umeda Sky Building (they went there on The Amazing Race once, so obviously, we had to), for a nice view over the city. One thing that struck us though, and it was the same in Tokyo - Japan doesn't really have that many skyscrapers! I always imagined it would be similar to Hong Kong in terms of skyline, but no! Japanese cityscapes are pretty flat! Well, flat by big city standards anyway. You wouldn't go confusing it with Cork or anything!

Afterwards, we visited an area of the city called Dotonbori; and if the Osaka skyline was not what we expected of Japan, then this bright, flashing, neon district definitely was! 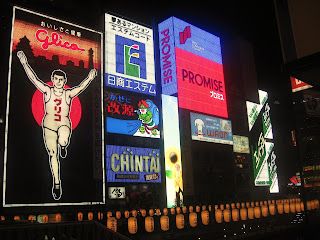 And speaking of "typical Japan", with only a few days left in the country, we did something that we'd been putting off for a long time. In fact, we'd been putting it off for our whole lives - sushi! Neither of us had ever tried it before, so we thought what better place than Japan to throw some raw fish down our necks for the first time? 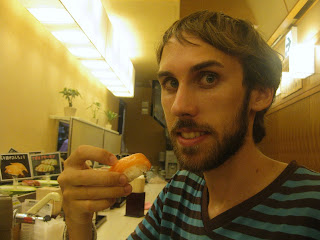 I wish I could say it was a revelation and that our eyes had been opened to the wonders of Oriental cuisine. I wish I could say it will always be in our hearts, but we barely even kept it in our stomachs! It was disgusting! I always suspected this would be the case, but then I thought - it's a popular international dish; nobody would eat it if it tasted so bad; there's got to be some trick to it, right?

And we gave it a fair chance, we really did! It wasn't a case of taking one bite and condemning it forever. We tried salmon, boiled shrimp, tuna rolls and unagi - all terrible.

This is my second time using a picture of Ross this summer!

(Also, I never knew I could use GIFs in the blog! This changes everything!)

The next day, our last full one in Japan (*tear*), we took a little day trip thirty minutes down the road to Kobe, famous for Kobe beef - the most expensive beef in the world (obviously, too expensive for us!). It was a really nice city too, not too big, right on the water's edge and apparently the number one place for expats to live in Japan. 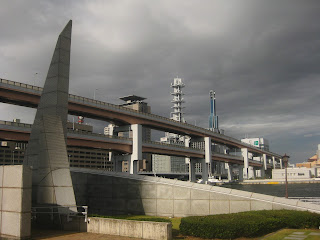 And see how futuristic it looks!

We spent most of the day just strolling around, through the streets, down by the harbour and into Chinatown. We went to the Chinatown in Yokohama too and it's kind of a waste of time really seeing as we live in one big Chinatown anyway! It would be like going abroad and visiting the local "Ireland-town".

Actually, on second thoughts, I'd love that! Just to see what their view of Ireland would be! Probably just a street of pubs. And sadly, that would be pretty accurate... 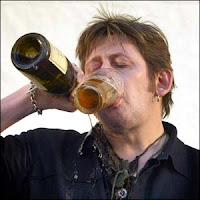 And that was pretty much our time in Japan done! The next morning, we just visited Shitennoji Temple and went for a walk around Tennoji Park, making a video diary in the process:

before getting a train to the airport and then off to Beijing! I'm sure it won't be our last time in Japan, I hope not at least, but for now it was onwards and upwards, back to our adopted motherland for the last leg of our journey!