Sorry sorry sorry! I'm so far behind! Massive apologies to all. Anyway, Kyoto! For no reason whatsoever, I had tipped Kyoto to be the dark horse of the summer. I just had a feeling I was going to love it here, even though my knowledge of the place barely extended beyond studying the Kyoto Protocol in college. We stayed here for six days overall, longer than we had spent in any other city this summer, but even after almost a week in town, the streets never really seemed familiar. In every other place we had visited, even just for a day or two, you gradually get a feel for the place, for better or for worse. But I never felt that in Kyoto. Don't get me wrong, we had a lovely time here, but I just felt like there was something missing... 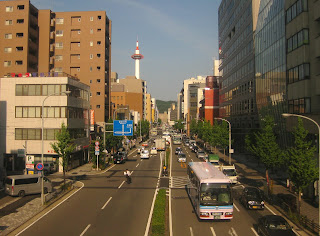 On a lighter note, here's a mildly interesting fact from our trip - this is the second time this summer that we've visited cities that are anagrams of each other with Kyoto & Tokyo joining Hoi An & Hanoi on the list. Ok, I know I said that was mildly interesting, but who am I kidding, that was a f*cking incredible bit of trivia!

We arrived in Kyoto on the afternoon of August 7th after a speedy Shinkansen journey from Hiroshima. When we arrived in town, we checked into Bola Bola - a really nice, traditional Japanese guesthouse, complete with straw mat floors and everything (although the novelty wears off pretty quickly when you have to sleep on them for 6 nights...). We dumped our stuff and headed down the road to Arashiyama, a picturesque little mini-town in the west of the city, the highlight of which was definitely the Bamboo Forest. 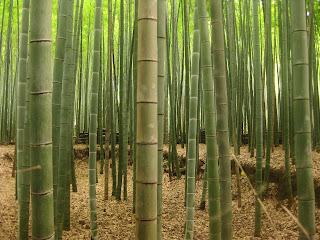 This was one thing I really wanted to see in our time in Japan, any one would do! Every country has its iconic images, defining features that give the place its unique identity, and Japan probably has more than most. So, we wanted to see as many as possible during our time here. Basically, we wanted our stereotypical view of the country to be true! (If I had seen a sumo wrestler walking through the trees, eating sushi, I think I would have died of happiness!)

The next day, we went to Nijo Castle and walked around the grounds. It was a lovely place, although you weren't allowed to take pictures inside the buildings themselves, so you'll have to take our word for how pretty they were! 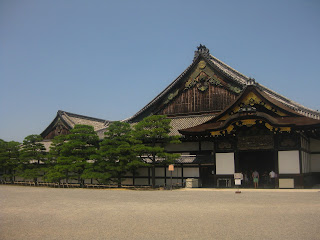 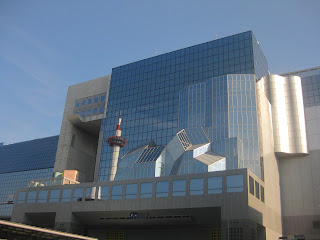 Sorry for flying through everything so quickly, but we had six days here so I might have to zip through some details. One thing worth describing though was our dinner that night! The area in which we were staying, Uzumasa, on the outskirts of the city, didn't have much to offer in terms of food, and anything half decent was doubly expensive (€30 pizza, come on like!). But its saving grace was an amazing Indian restaurant with naans the size of your head! 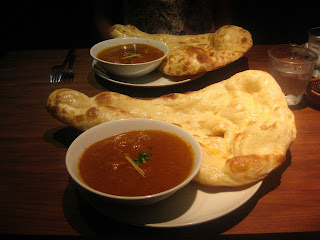 Seriously, they were comically large! And ridiculously tasty!

The next day, we went to the Fushimi Inari Shrine, probably one of the most recognisable and impressive sights in the city. The shrine itself sits at the base of Mt. Inari, but the main attraction is the thousands and thousands of torii gates that line the mountain paths, forming big, orange tunnels running up and down the hillside. 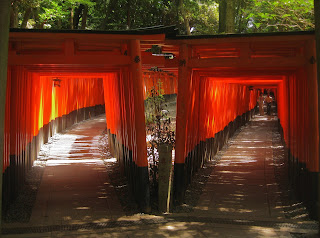 Each one of these toriis... (toriis? toriies? I'm not really sure about the plural, neither one looks right)

(Someone call Beverly Hills 90210, cause I may need to check my Tori Spelling! Baddum tsh!)

Anyway, each of these toriis are donated by local businesses as an offering to the Shinto god, Inari - god of rice, presumably in the hopes of wealth and success, rather than actually rice. As I said, the place was covered in them, and they seem to be putting up new ones everyday, so, if you're hoping for a prosperous year, forget donating one, and try investing in the company that makes them!

And speaking of dreams of gold (laboured segue alert!), we capped off our day by gathering around the wireless to listen to Katie Taylor's Olympic triumph. Ireland!!! 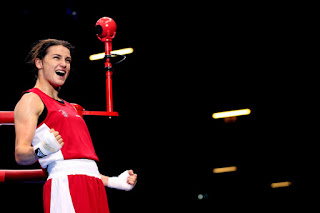 Wow, the Olympics was so long ago... I'm really far behind in this blog!

We mixed things up a bit the following morning and went on a day trip to the former Japanese capital of Nara, which I just found out has recently celebrated its 1,300th birthday! So, happy birthday, Nara! It was a lovely town, similar to Miyajima in many ways - lots of temples, lots of deer and lots of fun to be had! It was quite a gloomy day though so we just kinda swanned about the place. (Aww! I should've said that when we hired that swan boat in Bedugul two years ago! I could've even said swanning a-boat! I really missed a trick there...)

We visited a few sights around the town, including Daibutsuden, which is a UNESCO site and apparently the largest wooden building in the world, and also houses Japan's most famous Buddha statue. 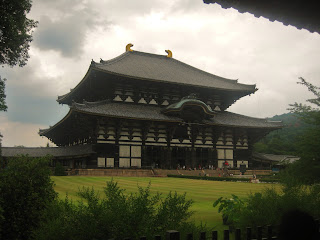 We also got our fortunes told at a temple-side stall. We had to shake a box, take out a stick, hand it to a woman and she gave us a print-out of our futures. A very spiritual experience, I'm sure you can imagine. And the good news is, we should both expect some "moderately good fortune", which is nice...

The next day, we had intended to get up and active again and hopped on a bus to a different part of the city, but as we arrived, the heavens opened, so we just stayed on board for a round trip back to the station. We were looking for some rainy day activities and were all excited for a holiday-cinema trip, until we found out it was €18 a ticket. Instead, we went to a manga museum which was good fun, although I'd imagine it would have been a lot more rewarding if we actually spoke Japanese (or had an interest in manga...). I did get my portrait painted though! 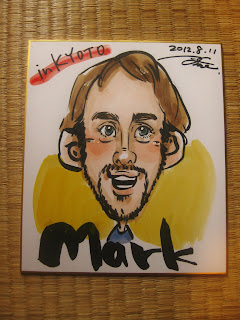 I think it's quite good! Aisling decided not to get one done, although she was raging she didn't afterwards!

We also went for dinner (for the umpteenth time since arriving in Japan) in a place called Saizeriya. It's a chain of cheap and cheerful Italian restaurants with branches all over the country. The food is actually quite good too considering the price. There's apparently one in HK too, although we haven't checked it out yet.

That evening, we finally got around to watching The Hunger Games. I had been listening to the audiobooks as we travelled through Vietnam and Laos, and Aisling had subsequently read all three books before we arrived in Japan, so we couldn't wait to actually see it on the big screen (of my laptop...). It was all a bit of a let down in the end. I don't want to be one of those people, but the film really didn't live up to the books. (I think this is actually the first time I've read a book before watching the film!) The books are great though, you should read them! Or better yet, listen to the audiobooks - all of the fun, with none of the effort! 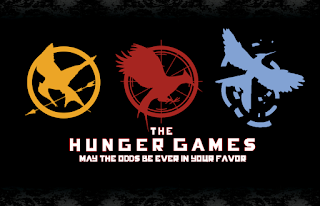 And that's about everything worth mentioning. We visited a few more temples, had a failed sushi expedition and of course, made a video diary too:


So, that was Kyoto. Perhaps a little dip in form for an otherwise flawless Japan. Next stop and last stop, Osaka!
Posted by Mark O'Leary at 5:18 AM