Next on the list, Yokohama & Fuji Five Lakes - two entirely different places, but seeing as we only spent a night in each, I'll just snuggle them up together for the purpose of this entry. It was tough leaving Tokyo behind, but these two didn't disappoint. They picked up the baton, carried the torch and kept the flag flying for Japan! (Sorry for the mixed metaphors, the Olympics were on at the time...).

First up was the very short trip down the road to Yokohama, so short in fact that it's hard to tell where Tokyo ends and Yokohama begins. Japan's first and second cities just seem to merge together like a big pair of urban Siamese twins. Tokyo may have had more glitz and glamour but Yokohama had its own charms too. 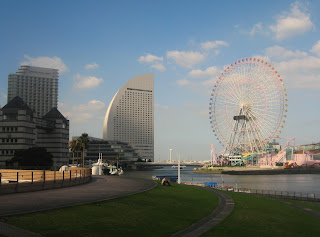 We left Tokyo early on the morning of July 31st. We really only had 24 hours here so we wanted to make the most of it time-wise. So, after dumping our stuff at the hostel, we headed out for the day, walking through Chinatown and along the docks of Yamashita Park. There also seemed to be some sort of Hawaiian holiday village, and now that I think of it, there were Hawaiian things all over Japan! Hawaiin music, Hawaiian restaurants, Hawaiian shrits - It's the most Hawaii-influenced place I've ever seen! (I've never been to actual Hawaii...).

We then went up to the modern Minato Mirai district, and even went back there again later on that evening to see the place at night. 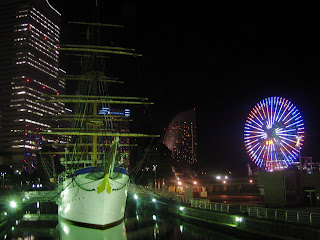 We also treated ourselves to Subway for dinner, our first Japanese Subway experience, and quite different from what we're used to. I'd class us as Subway connoisseurs at this stage, seeing as we go there about twice a week in HK, so here's my analysis:

- Nice bread, very fresh and soft,
- Potato wedges with the meal deal instead of cookies or crisps - a bold move, but it works.
- A different selection of salads, but as long as there was lettuce and tomato, I didn't mind.
- Some downsides though, the price obviously, but that's just Japan.
- You have to pay extra for cheese too. What's that about?!
- Also, their subs of the day leave a lot to be desired, Potato & Cheese, Avocado & Veggie, are ya kidding me?!

But all things considered, a very respectable performance and just what we needed. 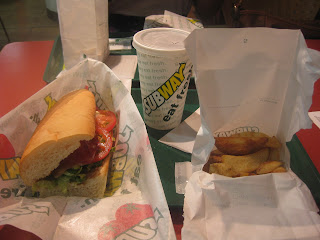 One other thing worth mentioning, about Japan in general - vending machines, they're everywhere! In buildings, in parks, on the side of the road, all over the place! They're really handy though, and we even saw some digital ones in Yokohama, very snazzy altogether! 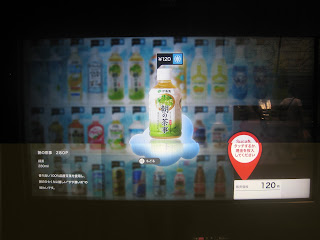 The next morning, after breakfast in Yokohama, we got the train back to Shinjuku, and then on to Kawaguchi-ko for our second chance at Mt. Fuji. We arrived in style too, aboard our awesome Thomas the Tank Engine themed train! 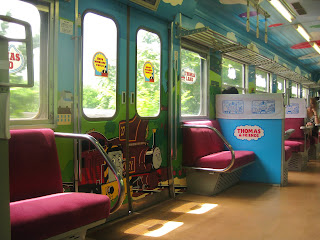 We had about a day and a half here overall, and after the disappointment of Hakone, we were determined not to leave without getting a glimpse of Mt. Fuji. Unfortunately, that was completely out of our hands and as we rolled into Kawaguchi-ko, we were greeted by nothing but clouds! Well, there wasn't much we could do to change the weather so we just had to make the most of our time here regardless.

As the name, Fuji Go-ko (or Fuji Five Lakes) suggests, there are five lakes here. Shocker, I know! They're much too big to see in a day, so we just went for a walk a quarter of the way around Lake Kawaguchi, before turning around again. We then strolled up to the nearby town of Fuji-Yoshida as the evening came to a close, to visit the Sengen Shrine, but we couldn't find it... But but but! As we wandered around aimlessly, something started to emerge from the clouds, and just in time too! 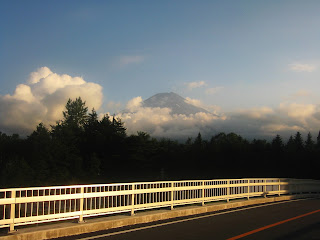 We finally got an exclusive peek at that elusive peak! As it was the middle of summer, it wasn't wearing its famous, snowy cap, but we didn't mind, we achieved our goal!

That evening we just retired to the hostel and watched some of the Olympics in the common room. They had a bunch of traditional Japanese clothes that you could try on, but we felt a bit self-conscious dressing up with people around. So, we waited for everyone to go to bed, rushed over, threw on a few kimonos and took some snaps! 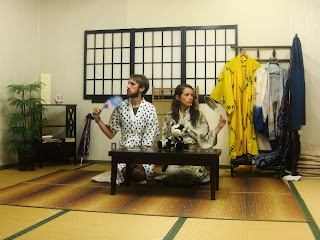 We were on edge the whole time! Whenever we heard footsteps coming towards the room, we threw off our kimonos and tried to act all nonchalant. In the end, we managed to get a few pics off before anyone came in.

The next morning, we had a few more hours in town before we had to leave Mt. Fuji for good. It was a beautiful day, but again, Fuji was hiding behind the only cloud in the sky! It didn't matter though, we saw it once and that was enough for us! We took another walk around town and then got a cable car up to Mt. Kachi Kachi. There were some lovely views over Lake Kawaguchi and, the now obscured, Mt. Fuji. The walk back down wasn't too bad either. Summer may have meant that there were no snowy peaks to be seen, but it also meant the hydrangeas were in bloom. 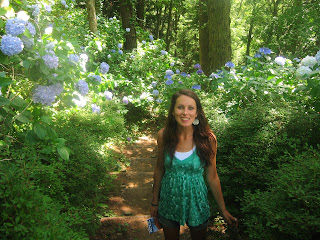 We made a video diary up there too!

When we reached the bottom, we had given ourselves plenty of time to get back to the hostel and have something to eat before we had to catch our bus. But at that moment, the clouds began to clear once more and we just couldn't resist running back down to Lake Kawaguchi to get one last glimpse of Fuji. Totally worth it! 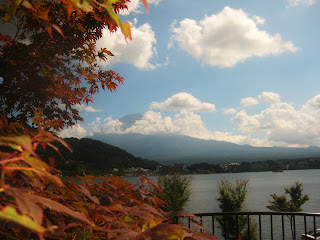 It did mean though that we had to hightail it back to the hostel, grab our bags, pick up something quick in 7-11 and jump on the bus before it left without us! Thus ending a thoroughly enjoyable time in Fuji Go-ko. The next few hours consisted of getting a bus to Gotemba, a train to Numazu, and then Mishima, before finally making the long haul cross-country to our next stop, Hiroshima!
Posted by Mark O'Leary at 12:26 AM