Ok, I know I said that capital cities aren't worth going to, and the real beauty of a country lies in the smaller towns, but I'll hold my hands up this time and make a huge exception for Tokyo. It's probably the best city in the world. Now I know that may just sound like hyperbole, as last time I described Manila as the worst city in the world, but both representations are true! We really went from the bottom to the top in the space of a day! Japan was just great all over though. Not only its modern, man-made beauty, but its natural and historical sights too. It had everything! And Tokyo was at the heart of it all. We loved our stay in Vietnam and Laos, but when we landed in Japan, it was a bit like stepping out of a time machine! No offence to those places, I know that sounded kinda harsh, but it was a refreshing change of scenery to be in arguably the most advanced country on the planet. 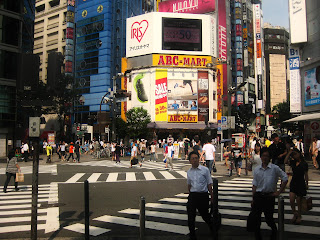 We arrived in Osaka on July 26th, two days later than we had planned, and as we were flying in late, we just spent the night there before getting the train to Tokyo the next morning. We had originally reserved a couple of spots in one of Japan's fascinating, little capsule hotels for that night, but because of our unplanned detour, we unfortunately had to cancel the booking. I was really looking forward to it too! 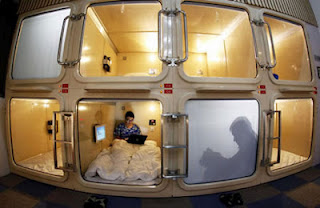 I know we should be blaming the typhoon for missing out on these two days in Japan, but it just feels natural to take it out on Manila! Damn you, Manila!!

When we landed in Osaka, we also activated our three-week Japan Rail Passes. Similar to European interrail passes, they allow you to travel on any train on the designated JR lines, mainly intercity trains but also a few different subway lines in some of the major cities. At a cost of 57,700 Yen (around €570), they may seem a bit pricey at first glance, but if we had just bought each train ticket individually, we would've easily spent two or three times that amount, so they're definitely worth the money. You can only get these passes outside of Japan though, so if you are planning a trip here, make sure to organise this a few weeks beforehand. 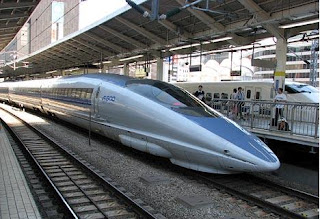 So, the next morning we hopped on a train to Tokyo to start our 4-day stint here. We were staying in a lovely part of the city called Nakano, although having said that, everywhere we went in the city was great! (Prepare yourselves, this blog entry is going to be full of love!) We never came across any dodgy areas or anywhere that we didn't feel completely at ease. I'm sure these places do exist, but we certainly didn't experience any. We actually found our way around Tokyo quite easily too, navigating the streets and subway lines pretty effortlessly, which is quite impressive considering, well, this:

On our first day in town, we walked around Ueno Park and the National Museum (not great), saw the bright lights of Akihabara's electronic district, and also went to Asakusa, to see Tokyo's oldest temple, Senso-ji, by day... 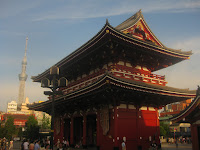 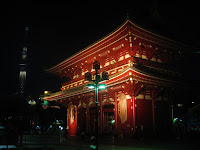 Asakusa as a whole is a very nice district actually. There's a few other smaller temples and shrines nearby Senso-ji, as well as a beautiful riverside area containing the Tokyo Sky Tree, the Asahi brewery building (which looks like a giant beer), and a big statue of... something. Possibly a massive, golden turd... 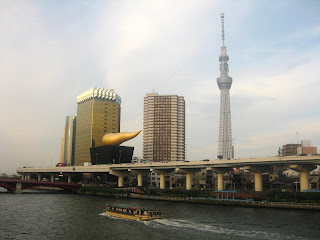 The next morning, after breakfast in the 7-11 across the road (we really had to eat on a budget here. Japan is expensive out!), we went off on a day-trip to the historic town of Kamakura, less than an hour by train from Tokyo. It's quite a small place, considering it's a former Japanese capital, and we were able to see everything we wanted on foot. 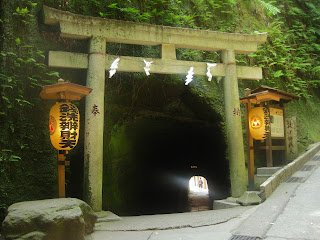 It's a beautiful town and well worth spending a few hours, with an endless supply of ancient temples and shrines to keep you busy, as well as nice sea views and leafy, forest paths too. You'll never get to see everything here, but I think we covered the highlights, including Tsurugaoka Hachiman-gu, Kencho-ji, the Zeniarai-Benten Shrine, Hase-dera Temple, before hiking along the Daibutsu Trail and finishing off at the Great Buddha of Kotokuin. 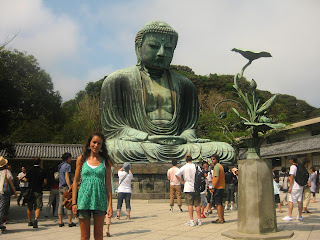 That evening we went back to Tokyo and visited Shinjuku, one of the busiest districts in town. It's probably the part of Tokyo most in keeping with the stereotypical view of the city - bright lights, fast paced, neon signs - a real attack on the senses. The kind of place where you'd have an epileptic fit just walking down the street. In a good way though! 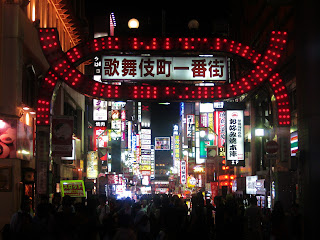 The next day, we had a look at the more historic side of the city as we strolled around the Imperial Palace and surrounding gardens. It was quite nice but not a whole lot to see, being honest. Kamakura was a lot more impressive in this respect. We actually spent most of the day on foot, first checking out the famous Ginza street crossing and then heading over to Shinjuku again and the uber-trendy Harajuku.

One of the big things that struck us in Japan as a whole is how safe the country is, and not just that, but how trusting the locals are of this safe environment. For example, while we were in a small park near the Imperial Palace, we saw a man cycling along with his young daughter. They stopped and he left her alone while he went to park the bike. Now, he was probably only gone for a minute or two, but in any other country that's a long time to leave a small child out of sight. And even when he returned, they left their bags by a tree and went for a walk around, not a care in the world. Amazing. 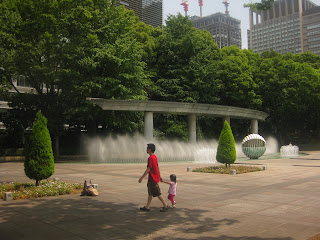 I was obviously too busy taking pictures at the time. If I was paying more attention, I could have picked up a new bag AND a new daughter for myself!

We went on another day-trip the following morning, this time to Hakone, a small lakeside town in the shadows of Mount Fuji, again, a little over an hour from Tokyo. We had a lovely day out here, as we carted ourselves around by train, bus, boat, cable-car and funicular, all in the space of a few hours. Our first stop along the way was Owakudani, a volcanic area where you can try the local delicacy of black eggs, which are just like regular eggs, but cooked in bubbling sulphur pits on the side of the mountain. Mmmm... 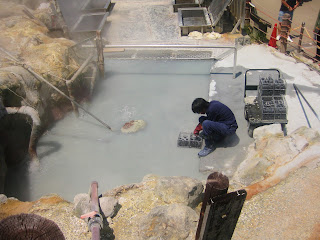 We were apprehensive enough about trying sushi, never mind sulphuric eggs! Needless to say, we moved swiftly along.

Next, we got a boat across Lake Ashi, which was quite spectacular in itself, but could've been a lot more so if it wasn't for a stubborn, misplaced cloud that sat snugly on top of Mt. Fuji for the afternoon. We waited and waited, camera at the ready, but alas, not a Fuji (or even a Fugee) in sight. 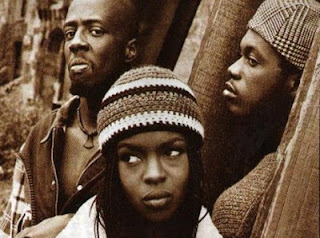 Disappointing of course, but all hope was not lost, we would get a second bite of the cherry two days later when we travelled to Fuji Go-ko, hopefully this time it would be ready to come out to play. We still had a great time in Hakone though, a really beautiful town. And the thing is, the weather was actually lovely while we there - blue skies overhead all day. 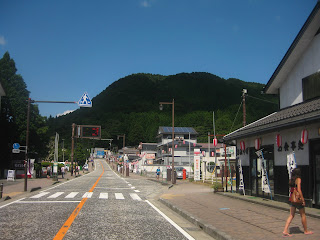 That one little cloud just ruined things for everyone!

We came back to Tokyo that evening for, sadly, our last night in town, returning to the world famous Ginza Crossing to get one last slice of Tokyo city life, before we continued on with our Japanese journey the next morning. 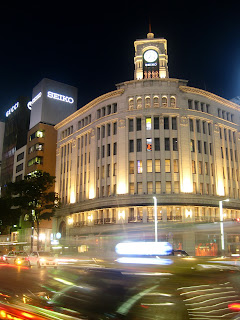 We made a video diary there too! Even if you don't want to hear us waffle on, it's worth it just to have a look around:

And there goes Tokyo! I know we've said it before about various cities we've visited in the past, but we'll definitely be back here again, without a doubt. It's just a wonderful city and in the four days we've spent here, I'm sure we've barely even scratched the surface. On the plus side, we still had another two and a half weeks left to go in Japan, so plenty more fun times to be had!
Posted by Mark O'Leary at 4:20 AM