So, back to Bangkok for another week! Boy, do I regret wishing for more time here now! Before all of that though we had our flight back to Yangon. Now, our flight a few days earlier with Air Bagan was going to be pretty hard to beat, seeing as we got free food and drink, so we were expecting some serious competition on the return leg with Yangon Airways. And in fairness, we weren't disappointed! We got more free food, but instead of just fruit and sandwiches, we got two pieces of cake; a muffin and a slice of Madeira cake (in fact, I got three pieces in the end as Ash didn't want one of hers! Result!). This edges it for Yangon Airways in my book, although Aisling disagrees...

As we arrived in Yangon airport, we expected to be greeted at arrivals by our man, Zaw Hein, but when we got out there was no sign of him. We had a wander around in case we missed him, but still no sign. Where could he be?! We had his calling card so I gave him a ring on a pay phone. It turns out he was stuck at a garage getting his air conditioning fixed, and he'd be over to us as soon as he could. And sure enough, he was over to us in no time at all! It was great to see him again. And, he had a whole day of activities planned for us too before we had to be back at the airport that evening. What a guy!

First of all, he took us to a lovely restaurant for lunch, where he ordered three bowls of chicken noodle soup. It was delicious actually, and huge portions too! We treated Zaw to it of course. I battled through it with the chopsticks given, but poor Aisling had to ask for a fork halfway through. Next, he took us to see some other wonders of Yangon; the Marble Buddha, some white elephants, and then an enormous reclining Buddha! It was huge! Waaay bigger than the one in Wat Pho! And way better too! 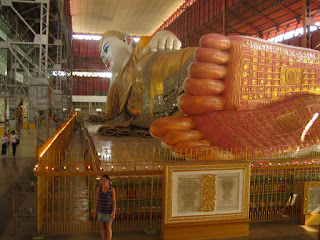 Afterwards, Zaw took us out to Inya Lake and bought us coffee (well, I got some strange ice tea instead), and we had a great chat about Myanmar. He told us about Burmese monks (and fake monks, who dress in the robes by day, and then go out drinking at night), corrupt government taxi drivers, and (in hushed tones) he told us more about Aung Sun Suu Kyi. He pointed out to us the house where she was imprisoned for the last 20 years, and told us the story of the American, John Yettaw, who swam across the lake to get to her house in May 2009. She took him in and let him stay the night, but the next day he was arrested swimming back across the lake. She was given an extra 18 month sentence for illegally having a foreigner stay the night in her home, meaning she couldn't take part in the 2010 elections. This was two weeks before her scheduled release. Zaw was telling us that the Burmese people believe it was a set up by the government, to make sure she was still imprisoned for the elections, and I wouldn't be at all surprised if it was true.

Unfortunately, that was about it for our brief stopover in Yangon. Zaw brought us to the airport to catch our flight, and we gave him all the money we had left to say thanks (about $10 and 10,000 Kyat), plus a postcard with a little message we wrote for him, and that was it for our time with Zaw. As I said previously, we'll definitely be coming back here again to finish our planned trip, and to hang out with our friend.

Ok, well actually to go back a few lines, we didn't give him all of our remaining money. I kept $20 just in case, and it's a good thing I did! As we entered the airport we were told that everyone flying out of the country had to pay a government tax of $10!! We were haunted that we actually had the $20 to pay for it, otherwise we would have been stranded in Yangon (how many times have we nearly been stranded here?!).

So, back we flew to Bangkok! It was sad to be leaving Myanmar behind, but such a relief to have ATMs again! As soon as we got off the plane, we rushed to the nearest one we could find (half expecting there to be some other problem...). Ash went first and we waited nervously for money to come out, it was the longest few seconds of our lives! Thankfully the machine made its little whirring noise and we had money again! Phew! 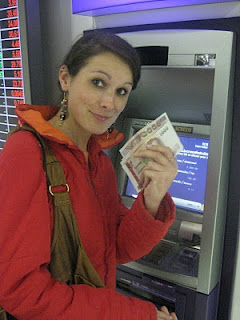 Next I went up to get some cash for myself, only to read that my account had been disabled. It's just one thing after another... Welcome back to Bangkok!
Posted by Mark O'Leary at 3:28 AM