Sorry for the delay in the blog and photos, due to circumstances outside of my control I haven't had a chance to upload anything in a while. (That, and I haven't actually written anything in a while either!)
Ok so, we arrived in Ko Phi Phi after a very smooth ferry crossing from Phuket. Maybe it was such an enjoyable ferry because the sea was calm, or maybe it was because we were so happy to be getting the hell out of Phuket! (Sorry, last dig at Phuket). Anyway, Ash took a nap on the way over while I watched 'Blast from the Past' on the TV, albeit a soundless version. We both went out on deck as the ferry approached the island. Ash had been here before but it was my first time, and my God, what a view! It was everything Phuket was not. White sandy beaches, green peaks, longtail boats floating on the water... If you imagine a tropical island paradise in your mind, Ko Phi Phi is what you'll see! 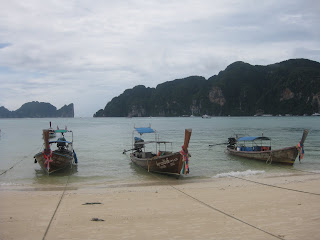 We got off the boat and there was someone from our hostel at the pier waiting to collect us. Well, I say collect us, he walked us to our hostel which was about 5 mins away. Everything on the island is walking distance, so there are no cars, no taxis, no traffic! The closest you'll get is a bicycle behind you ringing their bell. We went for a bite to eat after dumping our stuff at the hostel (really nice place actually! The room wasn't as good as Bodega Phuket in fairness, but we did have a pool there, so it all balances out!) and then just hung out by the pool for a while. 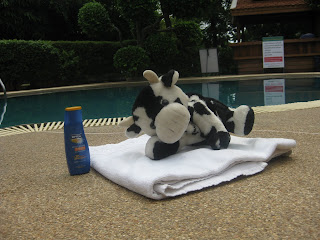 Afterwards, we took a stroll (or rather a hike) up to a lookout point on top of the island. It was a steep climb, but definitely worth it for the view! We chilled out up there for a while and stayed to watch the sunset over the island. Again, what a view! 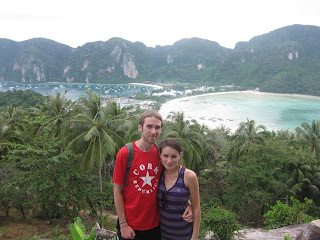 We went back down and had dinner before retiring to the room to watch more Amazing Race (we just can't get enough of it!) During the night we could hear torrential rain outside, dreading a day of just looking out the window... but when we awoke it was blue skies! We went for a stroll to the other side of the island and took some hilarious photos of Ash with a monkey in a little pink jumpsuit! (monkeys wearing human clothes is something that will always be funny!) 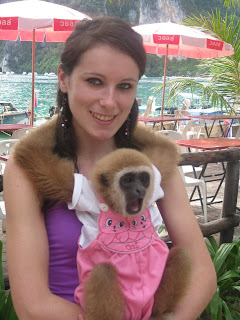 We got lunch in an Italian place and afterwards went looking around in a market stall across the way. While we were there though, the heavens opened once again. I've never seen so much rain! We stayed inside the market under the shelter for about 10 mins hoping for it to die down, but we eventually had to leave because the rainwater was flowing into the shop, pushing us further and further from the exit! 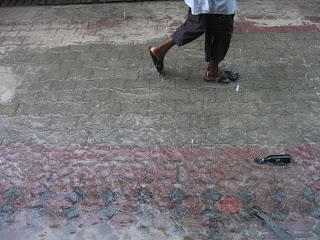 We ran back across the road to the restaurant (which, because of the rain, was now jam packed!) and thankfully found a spot. We made a token order of ice cream, just so we had a reason to sit there while the rain stopped. It didn't... After a while we just decided to make a run for it and legged it back to our room. Cue a whole afternoon of The Amazing Race... We ventured out again for dinner (secretly excited to be using our rain gear for the first time) and went to a place that we earlier saw had wifi. After dinner, it was still raining outside so we just scuttled back to our room once again. It was a disappointing day in terms of the weather, but we still had fun. It's a shame we didn't get to do more though because it's such a beautiful place! We were planning on going to Maya Bay too (where they filmed 'The Beach') but couldn't really cause of the weather :(
The next morning we got up early to get the free breakfast in the hostel (we were too lazy the day before) and also to get in as much sunshine as we could before it inevitably started raining again. We spent a good few hours relaxing by the pool before, as we expected, it started to rain. We went back inside to watch some more Amazing Race, when disaster struck! Ash's laptop wouldn't turn on! It was actually terrible, seeing how much we relied upon it for the internet, storing photos and, of course, The Amazing Race! We watched the TV in our room for a while but it just wasn't the same...
The rain soon died down though so went out for dinner. As we were walking along, we saw a place showing the Villa-Blackpool match so, of course, we ate there! (and before anyone starts, Ash was well up for it! She now loves Villa and knows all of the players! Incidently, her favourite player is Stephen Warnock because he's lovely.) Villa won 3-2 thanks to a dramatic late winner from James Collins. On that happy note we headed back to the room for the night, unfortunately our last in Ko Phi Phi.
All in all, it's an amazing place and I can't say enough good things about it. It's just a shame about the weather while we were there. We still had a great time though, and it's one of the places that we'll definitely be coming back to again some time.
Posted by Mark O'Leary at 5:40 AM