Just a quick blog update this time around for our final stop in Vietnam - 3 days and 2 nights cruising on one of the New Seven Wonders of Nature - Halong Bay. (Well, technically we spent the first day on Bai Tu Long Bay, but that's not really as catchy or prestigious). It was another stress-free little break, following on from Sapa, and a nice way to round off our time in the country. 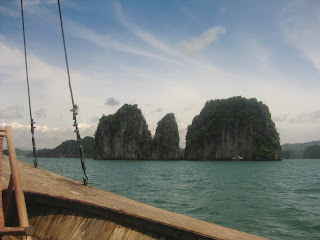 We booked our tour, once again, through our hotel in Hanoi with a company called Ethnic Travel. There were a lot of cheaper options available, and walking down the streets of Hanoi's Old Quarter you'll see agents with a variety of low-cost packages. But, as with anything, you get what you pay for and it's definitely worth splashing out a small bit to get, not only a nicer boat but, a tour that takes you away from the main route and the swarms of other day-trippers.

We left Hanoi on the morning of July 15th, and after a four and a half hour minibus journey, we arrived in Bai Tu Long Bay, Halong Bay's less famous but equally as beautiful neighbour. As soon as we landed at the dock, we set sail, enjoying a tasty lunch while we took in the panoramic views of the endless sea of karst peaks. 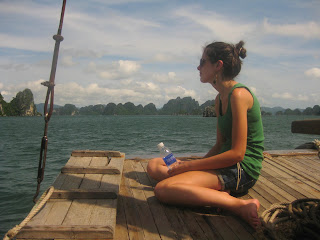 The scenery was certainly stunning, although very similar to Palawan in The Philippines, where we spent last Christmas. For this reason, we weren't as wowed by it all as we maybe should have been, but we could still definitely appreciate the beauty of the place.

After lunch, we just relaxed on deck, lounged around in the sun, caught up with our reading, and after a spot of kayaking, headed to Quan Lan Island, our home for the night. 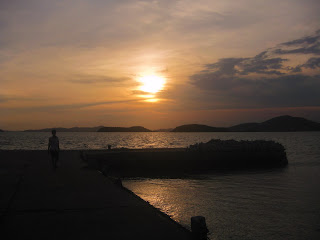 This was all part of the tour, spending the first night in the family home of Mr. Sau, a retired local fisherman. And that was fine with us, we were expecting a real traditional island experience - staying in a wooden hut, sleeping on a straw bed, eating food straight from the fire etc. But when we got there, it was just like a mini-guesthouse, a great big building with marble floors and a flat screen TV! He must have caught some amount of fish in his career if this is his family home! 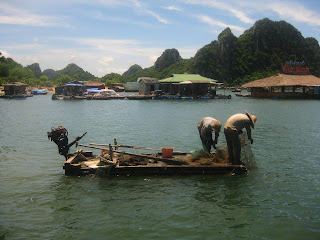 We didn't mind though, and we did at least have a lovely traditional dinner with everyone from the boat before bed.


The next morning, we were up early and, despite being promised breakfast at the house, we were greeted with a 10km cycle back to the boat for breakfast instead! It was a lovely cycle around the island, one we really enjoyed, although we would have preferred not to tackle it on an empty stomach first thing in the morning... That's one minor fault I'd have with the company, they did seem a small bit disorganised at times, but it wasn't the end of the world. 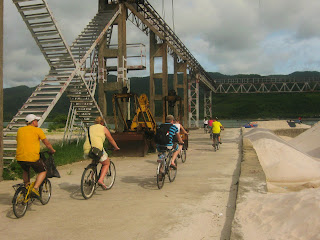 We finally got breakfast on board as we headed towards Halong Bay, and that rounded off the first half of our trip. As we arrived at the dock, we upgraded to a bigger boat with our very own private cabin, our new home for the next leg of the tour. It had a nice sundeck up top as well, so we spent most of the afternoon there, working on our tans. 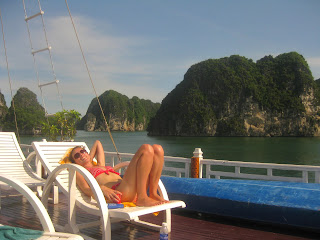 I'm sorry for the lack of excitement in this blog entry, but we really did very little besides balming out in the sun - great to do, not so great to write about...

We did go swimming too later in the evening to cool off, although saying that, I've never swam in such warm water before, it was, well not roasting, but definitely lukewarm! 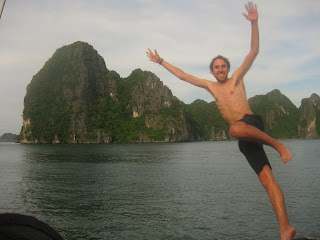 And look, I'm jumping in, wooooo! (that really was as exciting as it got...)

In fact, I'm just gonna fast forward the next 12 hours as it's just one big montage of eating, sleeping and sun bathing. Accept this video diary instead:

Aaaaaand, that's the end of Halong Bay! The next day we got a minibus back to Hanoi (to Tu Linh Palace of course), where we greeted at the doors with a big "Welcome home!". It really was like home for us though as we were given more free drinks and another room to hang out in until our train that evening. (And remember, at this stage it had been a week since we last spent the night there!)

But sadly, that was the end of our time in Tu Linh Palace, and Vietnam as a whole, as we jumped on a night train up north to China. It was sad to be leaving Vietnam, as we greatly enjoyed our time here. Some places more than others of course, but definitely a country worth visiting and perhaps worth returning to some day.

For now it was on to China, so I guess that's where I'll pick things up next time!
Posted by Mark O'Leary at 7:13 AM