Kuching!!! It's fun to say, isn't it?! And so, onto the next destination in our Borneo travels. Regrettably, we only had a day and a half to spend here, but it was certainly worth the trip out west.

Having previously been to peninsular Malaysia last year (KL and Penang), this was our first time jetting around the other half of the country. We did really enjoy our time on the mainland, and admittedly we've only seen a very small piece of it, but Malaysian Borneo definitely gets our vote for the country's shining light. Sepilok gave us a beautiful introduction to the island's flora and fauna, but Kuching and Mulu really took it to the next level! 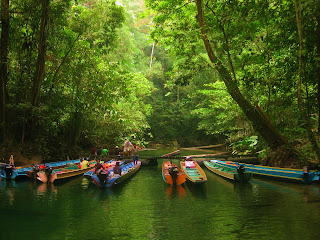 We arrived in Kuching late on August 24th, fit for bed and eager to rest up for our trek the next day through Bako National Park. Bako is unique in that it is home to seven different types of ecosystem, from dense rainforests to tropical beaches. From swampy marshlands to... four other types... I dunno, I'm not an ecologist!

After a bus journey to Bako Market, and then a rip-roaring speedboat ride down the estuary, we landed at the park headquarters. There, we found out that you could spend the night, which probably would've suited us better. Ah well, you live and learn! As things stood, we only really had about four and a half hours to wander around, which actually isn't much when you look at the size of the place (that's only like 40 minutes per ecosystem!). We still got to see quite a lot, although we could've easily spent another couple of days here.

There were various trails and climbs through the jungle for you to explore, some which even seemed to be carved out by nature itself - with bedrock and tree roots inter-twining to form natural ladders and walkways through the forest. 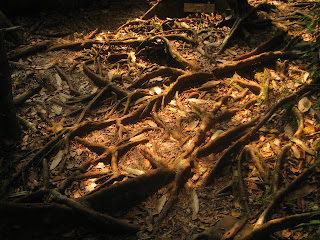 Then, as you journey out to the coast, you've got a number of secluded, sandy beaches, backed by the jungle. It was like something straight out of Lost.

The natural environment was obviously stunning, but the real highlights for us was the animal life on show, in particular, the proboscis monkeys! These guys are unbelievable! They don't even look real! Just check out that nose! 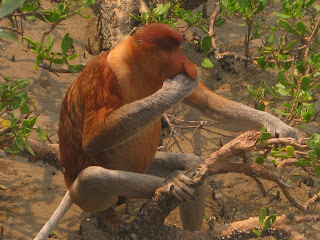 Have a look at one of them in action here: http://www.youtube.com/watch?v=GB7VyfpsSpg

Native to Borneo, they are, unfortunately, highly endangered, with only around 3,000 left on the island, and therefore, the world. Roughly 150 of those are in Bako National Park, so imagine our delight to see, not only one, but two on our brief visit! They're so strange to see in the flesh. They even make a funny honking noise which unfortunately you can't hear in the video...

Everyone was gathered round trying to get a good look at them. I kinda felt sorry for the common-as-muck macaques, desperately looking for attention, but alas, nobody was interested... 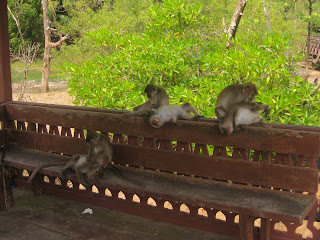 We returned to Kuching that evening for our first and last real night in the city. And it's a shame really, cause it's actually quite a nice place! And quite clean too, in terms of SE Asian standards anyway... We took a lovely stroll along the waterfront after dinner, which was all nicely lit up. It was just a generally nice place! 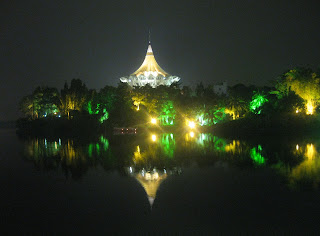 Loads of statues of cats too! That must be a 'thing' they have here...

The next morning we were up and off again. This time up to Gunung Mulu, another national park. And if we could've done with an extra day or two in Bako, then we definitely could've done with an extra week here! In the end, we only had two days, but we certainly made the most of our time. As soon as we dropped our bags, we were off on a trek up to, first of all Langs Cave, and then, Deer Cave - the world's largest cave passage. 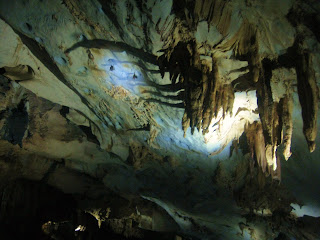 Langs Cave (as seen above), was just your average cave really, stalagmites, stalactites, all that kind of lark, but Deer Cave was where things really got interesting! As I said previously, it's the biggest cave passage in the world, and not only that, it's also home to around 3 million bats, dangling from the roof above. You might want to bring an umbrella... 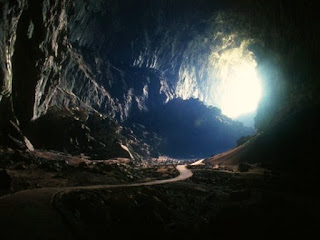 We walked along the passageway, through the heart of the cave, listening to the army of bats screeching overhead. It was an amazing thing to experience; the sights, the sounds, not so much the smells... well, what do you expect! We were just glad to escape without being on the receiving end of a guano shower!

The place even had a famous face at the entrance to greet you, from a certain angle anyway. 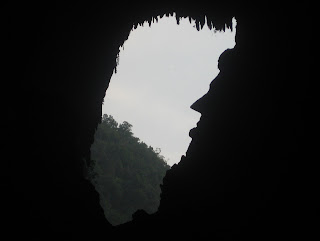 The cave interior and its inhabitants were definitely something to behold, but the best part was still to come. What's more impressive than 3 million bats inside a cave...? That's right, 3 million bats flying out of a cave!

Every evening before sunset, Deer Cave's entire bat population takes flight in a constant, hour-long stream in search of delicious insects, 30 tonnes of the stuff! Which means, not only an incredible ribbon of bats across the sky, but also a delightfully, mosquito-free environment for everyone else! 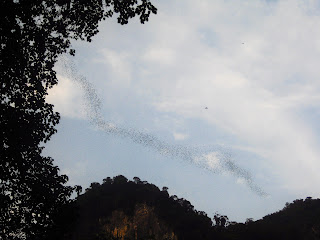 For a closer view of the bat exodus, take a look at our video diary! (It's at the end, keep reading!)

The next morning, we were up early and off again, ready for another productive day - first travelling downstream to Clearwater Cave and Cave of the Winds, which, although probably not as impressive as the previous day's caving, were still worth the trip. 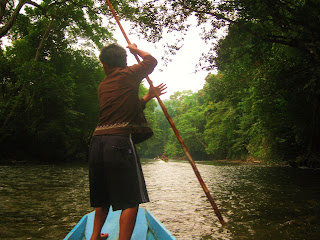 And then, an afternoon stroll across rickety walkways, stretching high above the forest floor. There were a few shaky moments, and I'm sure these swaying rope-bridges have seen better days, but it was all part of the experience. We even got to see some squirrels, dragonflies, millipedes and one craftily camouflaged tree snake. 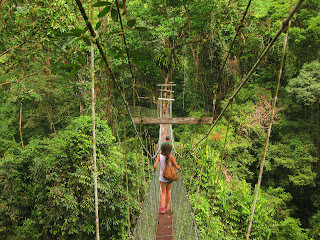 There were some amount of millipedes (possibly centipedes... I don't know!) around the place actually. And some of them were enormous! They were pretty disgusting, but in a strange way, you couldn't help looking at them... 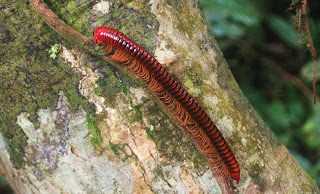 As our final evening drew to a close, we remembered that we never made a video diary! And we were back from all of our excursions, so no more interesting backdrops. There was only one solution... to the bat cave!!! I know we had already been there the day before, but it was only a half an hour walk away (the things we do for our fans), and it was certainly worth seeing again. So, here it is!

The next morning, we were gone again. As I said before, we could've easily spent another week here in Mulu. After all, we didn't even get see its most famous attraction, The Pinnacles, which require a three day trek themselves. They look amazing though, like a giant stone forest, so definitely one for the future. 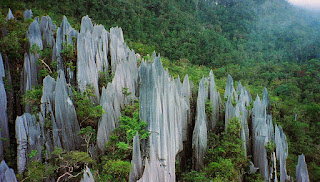 For now, it was off to our final destination, Miri.
Posted by Mark O'Leary at 7:19 AM